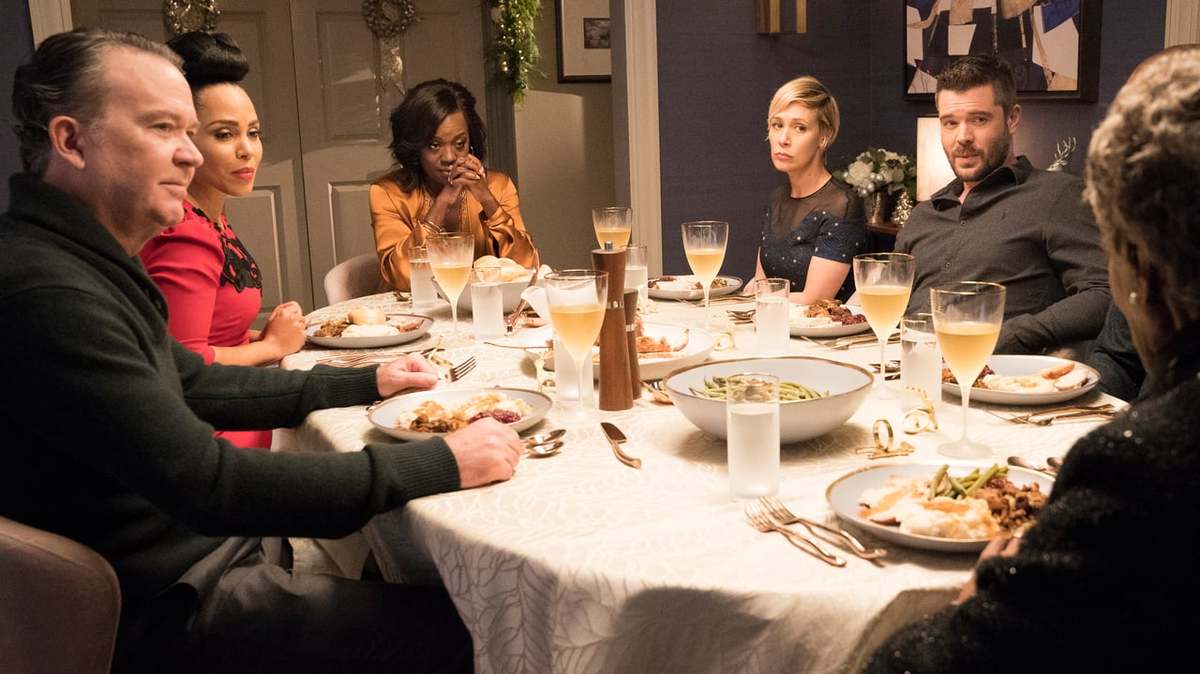 Just in case you didn’t get enough of the holidays last December, HTGAWM gives us a Christmas episode in February. I’ll admit I had lost track of the in-universe time, so I was a little confused when I saw the decorations and assumed this was another flashback or flash-forward the show makes such great use of. But I guess if the wedding took place around the holidays, then not a lot of time’s passed since then, so it kind of makes sense.

The advantage to having a holiday-themed episode is that it gives the show an excuse to bring in a couple of family members to heighten the drama. In fact, it almost feels like the holiday being celebrated is actually Mother’s Day as “Where Are Your Parents?” is anchored by visits from both Annalise’s mother and Connor’s mother. And while the two ultimately want the same thing for their adult children, their approaches couldn’t be more different.

Connor’s mother is still trying to live down the fact that she and Asher hooked up at the wedding—something Connor is still not okay with. And no matter how much wine she drinks, and no matter how much she insists that what consenting adults do—even when one of those adults is the same age as your son—is perfectly okay because “everyone has needs,” she’s lost a good deal of credibility. So when the FBI shows up with a warrant for the wedding photos, she’s at least sober enough to know something’s not right, and she really does want to help.

But there’s not much she can do at that point. So Connor does what everyone does on HTGAWM when presented with a problem—he lies about it. Well, he does tell her part of the truth—the Governor is really after Annalise (we think, but more on that later), and it’s because of their criminal justice reform work, and he really does want to help people. That’s all true. But he knows he can’t tell her the FBI may be able to connect them to at least one murder (and possibly two). So he tells her just enough to assuage her fears and give her something positive to focus on—the figurative equivalent of a condescending pat on the head.

On the other hand, Annalise’s mother refuses to be lied to. Miss Ophelia’s mental faculties may come and go, but she’s lucid enough to know that something’s not right with Annalise (mothers are eerily good at that). And so she gently but firmly keeps working until Annalise finally opens up (about some of it, at least). And then, like any good mother, she tells her daughter exactly what she needs to hear.

Just like Annalise, Miss Ophelia has lived a difficult life, and she could have very easily allowed her circumstances to make her bitter and mean. But she’s chosen to love even those who don’t deserve it—not for their sake, but for hers. She reminds her daughter that “only by saving everyone else can you save you.” In other words, the way to help yourself is to help those around you—especially those you care about.

So Annalise does something almost unimaginable (and something she’d probably never advise a client to do): she volunteers to meet with the FBI, on her own, without an attorney. And there’s an immunity deal on the table, and while I can’t imagine that she’d take it and throw everyone else under the bus, we don’t really know what she was planning.

Because the meeting with Agent Telesco never happens. As it turns out, Teegan Price is more of a friend to Annalise than anyone would have expected. Maybe they actually bonded over salsa dancing. Maybe Teegan respects what Annalise is trying to do to reform the criminal justice system. Maybe this is one strong, successful woman supporting another in a male-dominated society. Maybe Teegan got tired of Agent Telesco constantly asking for information and just wanted her gone.

Or maybe Teegan’s playing the long game and really can’t be trusted at all. On HTGAWM, you just never know.

Of course, the big bombshell that gets dropped at the end of the hour is that, according to Governor Birkhead, Emmett Crawford has been the real enemy all along. I’m not sure exactly how they can make that work—the only motive I can think of for Emmett to have Nate Senior killed would be to frame the Governor as revenge for trying to steal Annalise from his firm? That makes absolutely no sense, but I’ve seen dumber reasons for television murder, so we’ll see how they spin it.

Only two episodes left…there will be a comprehensive final, so, if you’ve missed anything, I suggest you start reviewing your notes now.