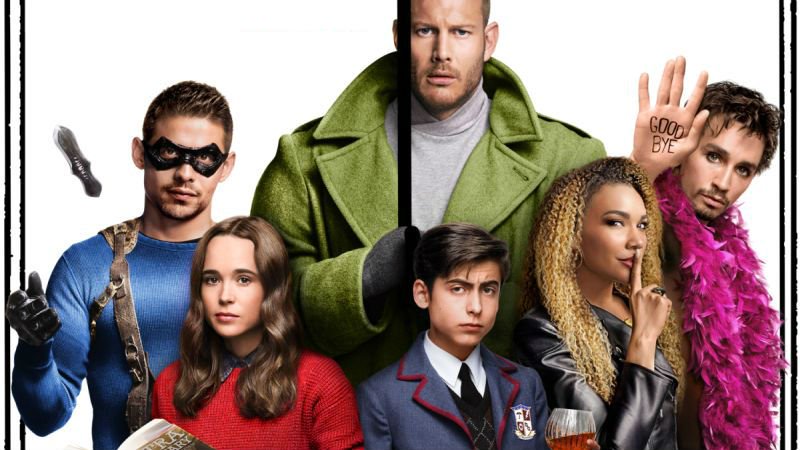 My goths! My nerds! And especially those of you who fall into that sweet, soft section of the Venn diagram where the two overlap, rejoice, The Umbrella Academy is here, and it is as delightfully loopy and bonkers as we all hoped it would be.

In a landscape where it is no more incisive than it is revelatory to claim superhero saturation, Gerard Way has given us a weird, singular gift. I am one episode in, and I genuinely had to exercise every ounce of-granted, weak-willed-self control I have to pause and write this re-cap before diving into the next.

For anyone already familiar with the book, the pilot episode follows the basic structure of “Apocalypse Suite” – an introduction to the main characters and their bizarre history and very particular hang-ups. The Umbrella Academy consists of seven children – most of whom become adults, but more on that genuinely weird qualification later – born on the same day, at the same time, to mothers who had not been pregnant when they woke up that morning. Sir Reginald Hargreeves, frosty eccentric, monocle wearing asshole extraordinaire, collects the children and raises them in his Wayne Manor-esque mansion, studying each child and their peculiar powers, while offering them little in the way of love or affection.

Hargreeves believes that these remarkable children will be integral to protecting the planet, and ultimately thinks of them more as weapons to be sent in to, say, a bank heist, where we first see Alison (aka: The Rumor) convince a robber to shoot his accomplice by whispering to him that she had heard a rumor. Diego (codename: The Kraken) throws knives, Luther (alias: Spaceboy) has super strength and just pounds on everyone, all at the tender age of ten. Vanya is a talented violinist, but according to Hargreeves, powerless. Absolutely ordinary.

When we meet them all, years later, they have splintered, separated by hurt and wounds that we only catch glimpses of. Klaus (I’ve-run-out-of-alternative-ways-to-say-aka: Séance) has a pretty obvious drug problem. Alison has attained some degree of celebrity, but in the process has lost her husband and her daughter. Luther has just been hanging out on the moon. Like you do. Vanya is playing violin. Diego is still fighting crime, a little too intensely. Ben (or: the Horror) is dead. Number 5 (aka: the Boy also aka: my absolute favorite) has vanished. And Sir Reginald Hargreeve? He’s dead. Newly dead, but dead none the less. Our heroes come together to “mourn” (quotation marks because, well…no one’s actually that sad besides Luther) the loss of someone who was ultimately a pretty terrible father figure.

Vanya has written a tell-all book that’s been received with various degrees of resentment by her adopted siblings. Luther and Alison have a strong connection, of amorphous definition. Klaus really enjoys needling everyone. Diego is angry, and has some sibling rivalry issues with Luther, who suggests in a round about way that one of his siblings is responsible for the death of Hargreeves. Unsurprisingly, none of them take particularly kindly to being indirectly accused of murder, and the house is fraught, until Luther puts on a vinyl of Tiffany’s cover of “I think we’re alone now,” and everyone separately breaks out in awkward nerd-dancing.

It’s absolutely cathartic while still managing to establish that these characters – for all their arrhythmic similarities – as isolated and divided from each other. And then Number 5 arrives, still in the body of a ten-year-old. He is a divine, arch asshole – and while I was going to reserve my assessment of the actors until a paragraph or two from now, I am compelled to mention that the actor playing Number 5 (Aiden Gallagher) surpasses my loftiest expectations for what a young actor can bring to the screen. Number 5, we learn, had time travelled into the future, to right after an apocalyptic event, and got stranded there. He spent 60 years trying to return, and when he reaches his siblings, it is with a date for the apocalypse. And it is very soon.

A pilot is, by necessity, a table setter of an episode. But credit where it is due, the pacing and editing of this first episode keeps it from every feeling heavy handedly expository. Most importantly, however, the episode is fun. It has a patina of the old goth influences of dear Gerard Way’s former My Chemical Romance glory (be still 21-year-old Kelly’s heart) without being grim, in a DC universe sort of way. That said, it manages to be funny (a use of “Istanbul (not Constantinople)” is so inspired that I absolutely can’t ruin it here, for anyone who has peculiarly decided to read a review before watching the show-no judgment. You do you.) without veering into Deadpool, fourth wall breaking, parody territory.

There is no lampshading of the fact that much of the warmth the children received came from a talking, glasses wearing Chimp named Pogo – it’s handled straight, like “well, of course, weren’t we all raised thus?” which adds an element of authenticity to a universe that is relatively gonzo, from start to finish. It isn’t necessarily surprising, given that Gerard Way is more well-known for being a musician than for writing The Umbrella Academy, that music plays such an integral part in establishing the tone of the show, but it is welcome how cleverly curated the soundtrack is. The show is acted to the pinnacle; the chosen actors do not all closely resemble the physical representations of them in the graphic novel, and it doesn’t even remotely matter. They are the correct people for the job.

And now, with anticipation and absolute delight, it is time for episode 2!