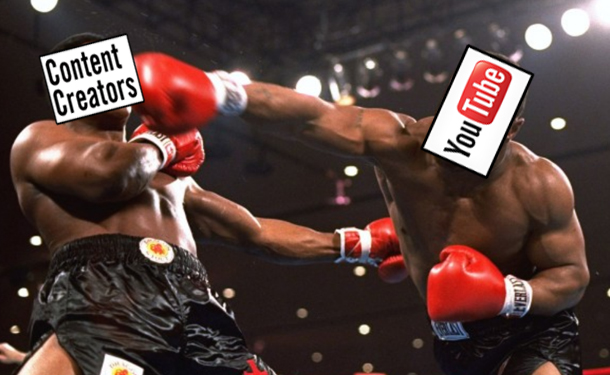 When I wrote last week about the fundamental issue with YouTube’s knee-jerk Content ID system, I noted that Google could redeem itself to some extent with a strong and reasonable response to the mess it has created. That hasn’t happened; in fact, it’s pretty much doubled-down on its policies. To play it so coolly, it must think there is no real threat of lasting fallout damage. It may have good reason to think this, but I don’t think anyone would disagree that it could have done so much better. Let’s examine where things stand at the moment.

Enjoy the metaphor, folks. Breathe it in. Quality symbolism.

Addressing the barrage of complaints and questions with which they were certainly inundated, YouTube recently sent out a generic email containing practical advice on how to deal with the system. In it, they noted that they “want to make it as easy as possible for [the user] to act on Content ID claims” and “make sure [they’re] providing the right product features to ensure that everyone continues to thrive.” They gave nothing of an apology, not even a hint, and were clueless enough to say that they wish to explain “how [the user] can get back to creating and monetizing great videos” as if it were the user who were responsible for the cessation in normal functionality instead of them.

It would be putting it very mildly indeed to say that this is disappointing. To skirt around the issue would have been bad enough, but they have opted to continue to back their system, make no reference to its obvious failings, and genuinely try to give the impression that there is no reason for alarm and nothing to be done other than simply accepting how things are now. Feathers already ruffled among the users will now be in a state of enraged disarray, and it’s a bizarre direction for a company that previously dealt with people fairly competently.

Those Behind the Curtain

Despite being such a huge phenomenon almost from the start, YouTube had managed to remain fairly low-profile with regard to its management and communication with its users for quite a long while before recent weeks. Every so often it made changes to the layout, or the video player, but regardless of how they were immediately received, the reactions generally amounted to nothing more than fans discussing their thoughts with one another. YouTube as a company and not just a service did not weigh in, did not take part; it seemed merely to exist in an abstract sense.

Then the comments debacle came about, and things changed. Here was something so irritating, so seemingly ridiculous, that many users weren’t prepared to just accept it and move on. Many YouTube channels have now disabled comments and linked their viewers to external sites for talking about the videos. Mere weeks later, videos started getting flagged en masse. Viewed as a whole, these events constitute an attack on the basic usability and appeal of YouTube that will not be easily forgotten, and people have started to develop some strong trepidation about its future. No longer can those who make decisions as to its direction manipulate it from the shadows, free of any serious scrutiny.

Most people commenting on the internet and in the media are on the side of the content creators, but even those who aren’t must agree that a system whereby a video is effectively guilty of infringement until proven innocent is unfair and unfit for purpose. We are reminded of ways to bring videos up to code, silence tracks, take up cases, but YouTube unleashed this mess and they need to do vastly more to ameliorate the situation. Those who earn incomes from their videos require enormous numbers of views to make decent amounts, and a massive amount of work goes into what they do. Consider their positions relative to traditional media creators. Televisions producers contribute to merely one aspect of content, require vastly fewer views for their productions to be seen as worthwhile, and have hugely more consistent salaries.

I concede that—despite my earlier optimism—people are not tremendously likely to abandon YouTube in significant numbers. It remains the de facto alpha site for video sharing and will not be dislodged any time soon by anything other than a vastly superior rival or a lengthy campaign of impressive incompetence from its higher-ups. That doesn’t mean people need to accept it, though. If the powers in charge keep being challenged on their policies, they may still come to their senses and course-correct.

Besides, while it seems unlikely that YouTube will ever crash, it rose quickly and could yet fall. Online content creation is big now but it is only going to get bigger. The standard television media model may not last much longer, and when it moves with the times, those who dominate the internet video sector will have everything to gain. In the long term, if YouTube won’t help usher in a change in how content is governed, a competitor could well emerge to displace it.