Home NewsEntertainment When Will We Get A Super Heroine On The Big Screen?
EntertainmentTV and Movies

When Will We Get A Super Heroine On The Big Screen? 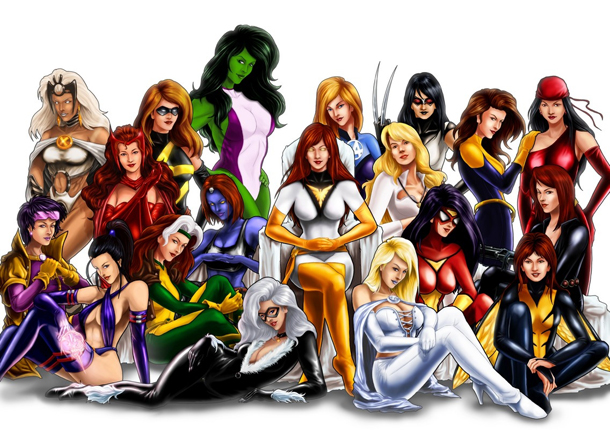 Half the population is made up of women and there is a pantheon of female superheroes that exist in the comic universe already. So, what’s the hold up!? There’s more to female superheroes than Catwoman, Wonder Woman and Elektra! I contend that if more indie filmmakers write original characters for us to identify with, then we will start to crave more action/adventure female protagonists that are neither vapid strumpets and wooden autobots void of personality.

Where Have All the Super Heroine Movies Gone?

Female superheroes on the big screen so far (Black Widow, Catwoman, etc) are shown through a male lens–camera lingers on cleavage, butt, slinky walking, etc. A big studio would probably continue this gaze and alienate both genders. Men don’t want to identify with female protagonist; women don’t want to watch a 90 minute reminder that they are walking philly cheesesteaks. Another issue with existing tropes are overcompensating with wooden, aloof ladies who are completely unrelatable regardless of gender. Characters like Batman and Spiderman are able to be superheroes while still being vulnerable, damaged, and emotional.

As a child, who loved action/adventure, science fiction, and fantasy, I found that I always had to play make-believe as a male character. When you play Indiana Jones, you want to play-fight against the bad guy, save some treasure, and slide under doors that are just about to close! You don’t want to play “get tied up and wait to be saved.” I had become so accustomed to watching an action movie and identifying with a male protagonist that I was shocked when Xena came along in third grade, and all of a sudden I had a female “hero” with whom I could identify. You can bet I was Xena two Halloweens in a row.

I think our best bet for getting the super heroine ball rolling is if independent filmmakers start making them. If these independent films can prove an interest, then the Fat Cats may be willing to pony up and put the cheddar on the line. This means that fantastic new female superheros need to be created for a new generation. We don’t need to rely on the limited cache of our grandparents’ superheroes; surely we can muster up a few amazing new characters that can hold a movie. We don’t need a franchise–just enough characters to prove interest and get audiences accustomed to identifying with compelling female heroes. Certainly, TV drama has prepared us with shows like Fringe, Homeland, and Battlestar Galactica.

The ultimate reason that super heroines can’t get their own movies is money. Most reasons for anything in Hollywood is money. In addition, so many of the popular super heroines most of us are familiar with were not written with a modern audience in mind. The issue of licensing and character rights are also ever prevalent in Hollywood, and it doesn’t seem like Hollywood is going to be creating any original characters anytime soon. Regardless of Hollywood’s holdups when it comes to starting film franchises with older properties, we need to have female superheroes, so little guys and gals can identify with female protagonists! Indie filmmakers need to get busy making more Xena’s and Starbucks!

7 Reasons Apple Is On Its Way Out

BIGGER question, will there ever be a Black real super hero?(not the half assed stupid tokens from a few years ago, or kind of black with white features  i.e. long white hair flat ass etc)