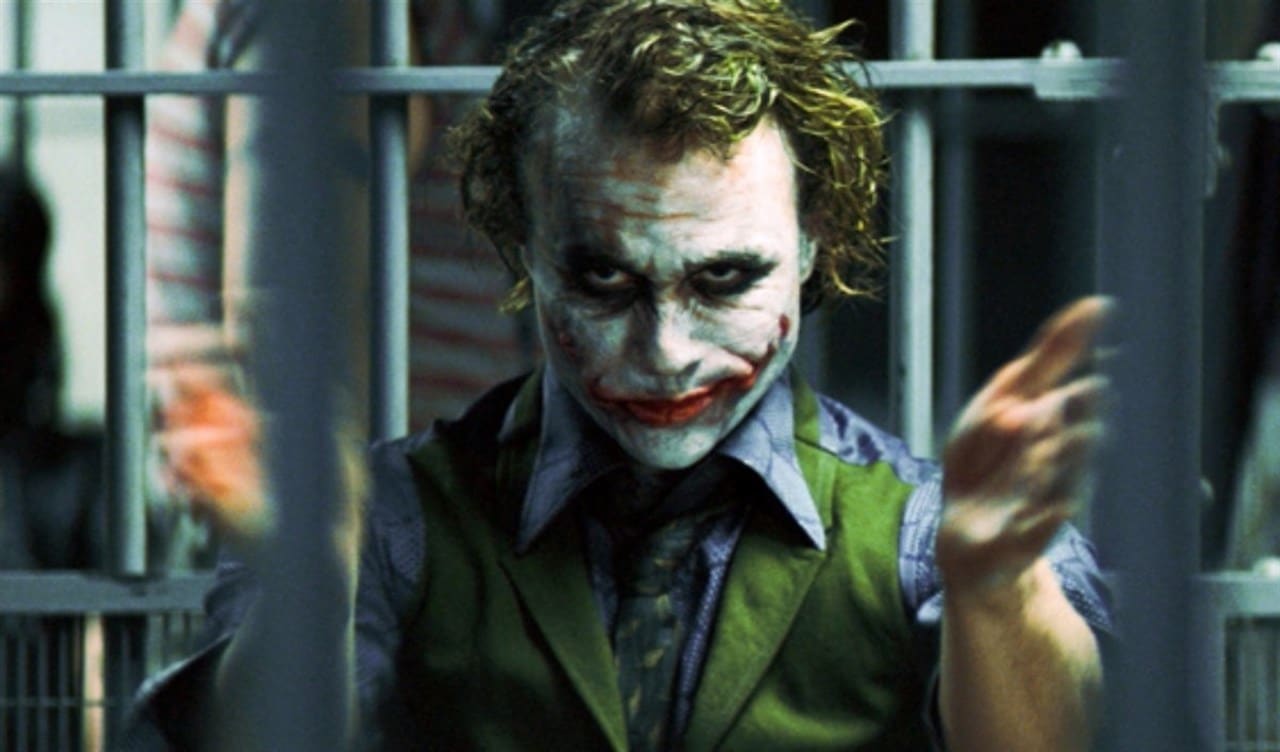 This summer marked the tenth anniversary of what is arguably the greatest Batman movie ever made (and there’s really no argument): The Dark Knight. This week, to commemorate the event, Warner Bros. has re-released the film in a few select cities, and so this seems like a perfect time to look back at the second chapter in Christopher Nolan’s Dark Knight trilogy and remember just what it made it so special. And although we could spend hours talking about how great Christian Bale was in the cape and cowl, or Nolan’s limited use of CGI to give the action sequences a truly realistic feel, there’s really only one word that explains why this film stands head and shoulders above any live-action Batman vehicle before or since: Joker.

Sure, there have been other appearances of the Joker in TV and movies over the years. He’s probably the most iconic villain in the Batman universe. And some truly noteworthy actors have turned in some very fine performances. By the way, we’ll limit our discussion to just the live-action Joker performances on the big and small screens. While there have also been some excellent Joker voice-overs in the world of animation and video games (we’re looking at you, Mark Hamill), we’ll stick to TV and movies for the sake of time.

It started with the great Cesar Romero in the 1960s opposite Adam West’s Batman. His goofy interpretation of the character fit perfectly with the overall tone of the show—more sociable than sociopathic. I’m not quite old enough to have watched the series when it first aired, but reruns of the show are among my earliest memories. And yes—Adam West will always be the Batman (and I won’t debate that with you–it’s just established fact).

Jack Nicholson redefined the role in Tim Burton’s 1989 film. As good as Michael Keaton was, the movie just wouldn’t have been a hit without Nicholson’s Joker. Even though this version of Batman’s world was a shade darker (and a little more murder-y) than the one West and Romero lived in, Nicholson brought a certain light-heartedness that made Joker fun to watch. It was dark comedy, but not too dark. And very entertaining.

(More recently, Cameron Monaghan has turned in some solid performances despite questionable material as both of the Joker-esque Valeska brothers on Fox’s Gotham. While neither character is officially “The Joker,” it’s obvious who the writers are patterning the characters after, and it’s worked pretty well so far.)

When Nolan took over the franchise, you could argue (and rightly so) that he simply did a better job with Batman than any director had before. All three of his Batman movies are sold. However, if you take the first and third installments of the Dark Knight trilogy as standalone films, there’s something missing (and not just because the three movies tell a cohesive story). Many (probably most) casual fans who didn’t grow up reading Batman comics didn’t recognize the main villains in either Batman Begins (Ra’s Al Ghul) or The Dark Knight Rises (Bane). And while those were above-average films, the lack of a recognizable member of Batman’s Rogues Gallery slightly dampened the experience for the average moviegoer.

So at least one of the films needed a well-known villain. And no Batman villain is more infamous than the Joker. But, as we’ve seen, the Joker’s already been done, and been done well. So notoriety and popularity (for lack of a better term) with the fan base wasn’t enough—this Joker had to be truly memorable. And when Heath Ledger got his turn with the green hair and white makeup, he simply took things to a whole new level.

As soon as we saw the creativity and precision of the bank heist in the opening scene, we knew this was going to be something special. But when the Joker introduced himself to Gotham’s underworld and made that pencil disappear, we were hooked. Ledger had done what only a truly great actor can do: he made us like a sociopath. Of course, we all knew Batman would win in the end, but, if you’re honest with yourself, you have to admit that, as you watched him storm through Gotham and make Batman’s life a living hell, there was at least a little part of you that, despite the fact that he was a vicious murderer with no regard for anyone but himself, you kind of wanted him to win. Just a little bit. Ledger was that good.

We all know that the story ended tragically for Ledger as he passed away at age 28, almost six months before the film would be released. He would later win a posthumous, well-deserved Oscar for his performance as the Joker. It would be unfair to speculate about the circumstances surrounding his death. There are plenty of other articles that have covered the subject thoroughly. All I’ll say is that Batman fans everywhere deeply appreciate the amazing performance Ledger gave us and the incredible effort that went into it. If Adam West is the Batman, then Heath Ledger will always be the Joker.