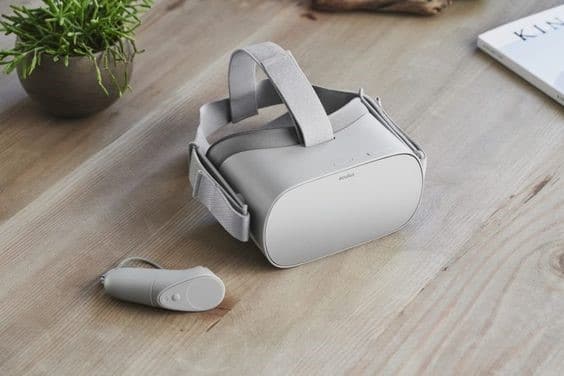 The Oculus Go headset is not only great for movies or VR experiences. It’s actually a pretty powerful gaming platform with a library to match. In today’s article, we’re going to show a couple of great game picks. We have zombies, robots, sports, and even a couple of jumpscares. So, keep on reading to discover your next favorite game for Oculus Go.

Our Choices in GO VR Games

Before we get started with the list, let’s talk shop. Your Oculus Go supports a lot of games and apps. However, not all of them take full advantage of your headset’s features. If you like to know more about how to unlock the device’s potential, you should check out this review.

It’s important to know what the device can and can’t do before choosing what to play. However, spoiler alert, the Oculus GO is packed with high-tech features that will allow you to truly immerse in the following games.

1. They Suspect Nothing + Overclocked DLC

If you’re in the mood for something with a sprinkle of humor, we wholeheartedly encourage you to try out They Suspect Nothing, a wacky puzzle-solving game with angry robots. As the story goes, you’re Earth’s last human survivor and, therefore, must do what it takes to infiltrate a society crawling with hostile robots.

To ace the game, you will need to perform various tasks such as pilot drones, conduct surgery, survive the rush hour, and more. Remember that the purpose of the game is to stay below the radar as long as you can. And it’s no easy task considering that any minor mistake can give you away.

As the titles suggest, the game revolves around shooting, blasting, slicing, and anything in between. If you were looking to play a great zombie survival game, then Drop Dead might be what you were looking for. Even though it’s a GO-exclusive title, Drop Dead looks extremely gritty and well-polished. And because no zombie game would be complete without a serious arsenal, Drop Dead allows the player to use weapons such as sticky grenades, fusion cannon, and a pistol.

Don’t go out there thinking that this title’s all about mindless zombie-shooting. There’s just a dash of storytelling to make the story interesting – your goal is to reach Monday’s evil layer. Only from there will you be able to put an end to the undead horde.

Next, on our list of great Oculus Go games, we have Dreadhalls – an interesting choice of words and an atmosphere to match. Genre-wise, this game is similar to titles such as Penumbra or Amnesia. There’s not much background to what’s happening in the game.

You, a lonely explorer, suddenly wake up trapped in a massive dungeon. Your only way out is by braving the darkness with a small light that grows dimmer by the minute. While exploring the dungeon, you will discover that you’re not alone.

Very much like Amnesia, the game relies heavily on stealth and knowing exactly when to flee.

And because we like atmospheric horror games that much, here’s another title that’s sure to pique your interest. AFFECTED – The Manor is a psychological horror game eerily similar to Layers of Fear. The aim is simple – escape the house before the evil inside consumes you. Like most games from its genre, AFFECTED – The Manor will test out your puzzle-solving and stealth skills.

This is a great title for those who love a good jump scare every now and then.

Death Horizon is not just another zombie game. It’s, in fact, The Zombie Game. Wake up and smell the breeze! A can containing a dangerous virus has been spilled in an underground research facility, killing everyone and turning them into bloodthirsty zombies. As the last member of an elite task force sent to secure the lab, you must do whatever it takes to ensure that the virus doesn’t spread.

One of the things we loved about Death Horizon is how gorgeous everything looks, despite being a smartphones game.

The weapons physics are equally impressive as well as the variety of enemies. Unfortunately, the arsenal’s pretty limited compared to other zombie titles, but that didn’t stop us from spraying bullets and kicking zombies in the head.

And because we always liked to end an article in style, the last title on our list has nothing to do with zombies, running away from scary monsters or eluding homicidal robots. To put it bluntly, RUSH is a gliding simulator. You put that wingsuit on, and that’s it.

Joke aside, it’s a little trickier than that. Indeed RUSH will put your wingsuit piloting skills to the test using a cleverly devised obstacle course. Careful now, because you are alone on the field. To win each round, you will need to hit every circle.

Well, folks, that’s it for our top six lists of game’s you shouldn’t miss on Oculus Go. Don’t forget to check out the manufacturer’s website every other day, because something refreshing is bound to pop up.