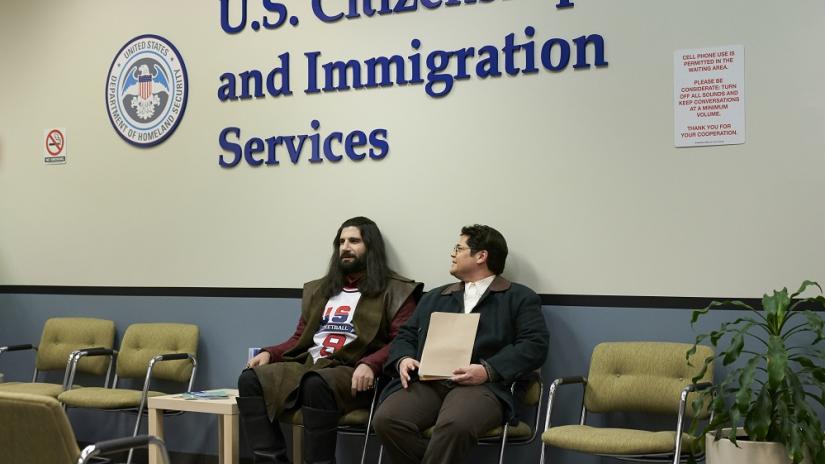 The newest episode of What We Do in the Shadows had an impossible task from the word “newest-episode-of-What-We-Do-in-the-Shadows” (I know it’s not one word, let’s not get precious!). The last episode was sublime. Beyond the guest stars, it incorporated threads that were traced back to earlier episodes, and felt narratively important. There was virtually no way this episode could top it, and it doesn’t. It’s still very fun and delightful, but it feels far more inconsequential.

Let’s look first at Nadjia’s plot, because it is the most involved, and also, in many ways, the most frustrating. Nadjia checks in on Jenna, who is not particularly excelling at being a vampire. She decides to train Jenna and takes her under her wing, with some small assists from Laszlo. I’ve said before – and it warrants repeating as many times as necessary – that if this show were nothing but a conduit for Matt Berry line-readings, that would be more than sufficient for me. And I stand by that. He remains absolutely perfect. Anyway. Jenna does not take naturally to any of the vampiric skills Nadjia and Laszlo try to teach her, so Nadjia takes her to a frat party to get some blood in her, to refresh her system. Jenna, however, is socially much more atune to, say, Colin Robinson than the weird, wild charms of Nadjia or Laszlo, and it is easy enough for everyone in the room to ignore her – which is how she discovers her vampire super power, that she can become invisible. And she loves it!

She and Nadjia have a pretty fun evening of it, and when the sun comes up, Jenna is convinced she can turn both her and Nadjia invisible and not be burnt. She’s wrong, of course, and Nadjia turns into a bat – a skill Jenna has not mastered even remotely – and flies inside, leaving Jenna to burn. And that is the conclusion of Jenna’s storyline. Let’s talk about why that’s frustrating. I understand the sitcom premise that the status quo can only be so challenged before it returns to normal for the next episode. But this is a show that hasn’t been afraid to get weird and take some chances. And perhaps, by the mortality rate our heroes are racking up, the show is trying to demonstrate that they are selfish and reckless – Nadjia doesn’t think twice about leaving Jenna, her own creation, behind. I’ll buy that. But there is something that feels narratively unsatisfying about the way that characters are introduced and thrown away, without them necessarily doing anything to advance the plot or greater story.

We already know our vamps can be selfish and cruel. We’ve seen the way they disregard everyone who isn’t in their core – and, if you include Guillermo – the way that even within the group, they can be pretty oblivious (they call him “Gizmo” instead of “Guillermo”). I’m not sure what I hoped for with the Jenna storyline, but something more than just having it literally turn into a pile of ash.

More fun, though equally inconsequential, is Nandor’s pursuit of American citizenship. After finding out that the small country he had been the war-lord of has dissolved, Nandor has a sort of “man without a country” existential crisis. Guillermo suggests that a good solution for this would be attaining American citizenship – a goal that Nandor began to pursue after a very stirring American Olympics season, but discarded when the Macarena took off.

A sidebar, related to my previous statement about how well we know the vamps; this joke is so perfectly in tune with the Nandor we have come to know (miles away from the tyrant he apparently once was) that it lands much harder and more beautifully because of it. This joke isn’t designed to make us know the character better – it relies entirely on the fact that we DO know him, so we understand that it’s such a Nandor thing, to abandon the pursuit of American citizenship because he gets distracted by a dance craze he likes.

Anyway. The process is not smooth. Guillermo tries to tutor him, but Nandor counts on his ability to hypnotize the test proctor. When he attempts to, however, he is unable to. And sure, the joke that it’s because so little humanity remains in government workers is obvious and loudly transmitted, but it still pretty much lands. Nandor’s absurd answers to the questions are wonderful and surprising no one, he fails. Just as he is sinking into gloom, Guillermo loses his shit and reminds Nandor – with no pity or empathy – that he is a vampire. The thing Guillermo most wants to be in the world. Immortal and bad ass. And it stirs Nandor back to his old, cheery self. Meaning that this storyline also has no actual impact. Nandor isn’t a citizen but he also doesn’t care. Back where we started.

There’s nothing inherently wrong with an episode of television that doesn’t go anyway. That’s fine! Especially in a sitcom. It’s just a bit sad to see What We Do in the Shadows go that route, after they so beautifully raised the stakes last week.