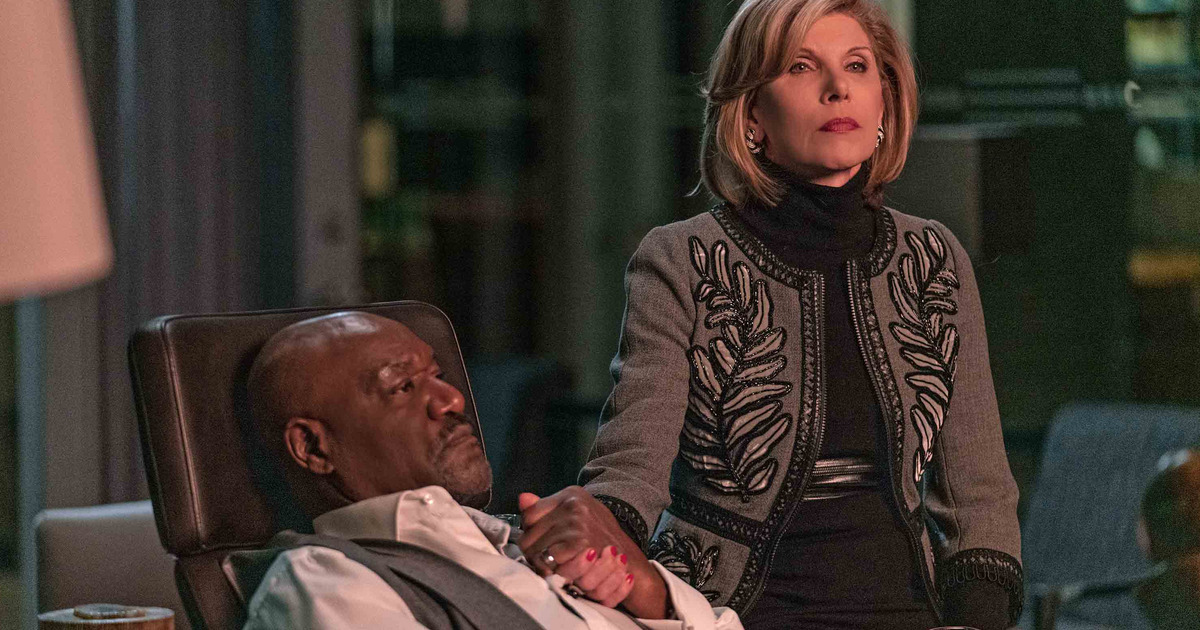 Things are very, VERY bad out there, and The Good Fight really wants you to know that. And if you haven’t gotten the point by now, the season finale leaves no doubt—fire is literally raining down from the heavens and destroying huge parts of Chicago. Maybe it’s the beginning of the end times, or the catastrophic consequences of climate change, or just a series of random accidents. Whatever’s causing it, the message is clear: we’re fucked. And there’s really not much we can do about it.

To say that “The One About the End of the World” is a depressing hour of television is like saying our president lies every now and then, or that the Alabama legislature doesn’t really understand how pregnancy works. It’s total devastation—other than a couple of relatively minor victories, everybody we care about loses. And when I think about the subject matter and how close to home a lot of it hits, I’m almost ready to jump off a bridge myself.

But that’s not to say it’s a bad hour of television. On the contrary, it’s well put together, entertaining, and thought-provoking. Good television doesn’t always make us feel good, but it should always make us feel something. The Good Fight tends to be a reflection of our current political climate, and often it’s one of those magnifying mirrors that shows you every wrinkle and blemish in excruciating detail. And we need a way to see those flaws so we can either do something about them or learn to accept them.

What’s troubling here is that, after showing us all of the really bad stuff going on in the characters’ lives (and, by extension, our lives as well), we’re left with the overwhelming feeling that there’s nothing we can do. Our leaders are still in power. People’s rights are still being trampled. The bad guys are still winning. And “love one another” may actually be good advice, but it just doesn’t feel like enough.

To be fair, there are a few small victories. For example, the Trump-appointed judge in Blum’s case against Reddick Boseman is so stupid that he can be manipulated into ruling in the firm’s favor by a cartoon giraffe, so Blum is denied the satisfaction of seeing his enemies go out of business. Kurt gets a small measure of revenge on the administration by showing an obvious lack of enthusiasm at a Trump rally. And Julius gets his appointment to the federal bench, so that’s something.

But those positives are vasty outweighed by the negatives. Let’s start with Maia. We watched last week as she threw her lot in with the vile, disgusting, odious excuse for a human being (much less an attorney) who tried to ruin her life in the first place. Which makes no sense. Yes, she was desperate to get her life and career back on track, but could she really trust Roland Blum?

In a way, yes. She can trust Roland Blum to be exactly the kind of person he’s always been. He’s a disgusting lowlife, and that’s never going to change. With Blum, she knows exactly what she’s getting, and she can use that to get rich and make a name for herself. It may not be the name she wants, but she’s a Rindell—how much worse can it get?

And that’s kind of the point. Maia’s already been through hell over her parents’ investment fraud, but Diane was there to pick her up and help her along. She made friends at Reddick Boseman, and they gave her an opportunity to move past the scandal and establish herself as a quality attorney. So why would she join forces with their nemesis and come after them?

Because (at least in her mind) when the chips were down, Diane and the rest of the firm bailed on her. She didn’t ask to be thrown in with Blum in the first place, and the drugs were his. But she got fired over them, and she feels betrayed. Diane’s her godmother, and so she can’t wrap her head around the fact that Diane would allow this to happen.

Of course, Maia’s not seeing the whole picture. Diane fought for her, but it just wasn’t enough to sway the other partners. And Diane tries to make it right by offering her a partnership (which should be Lucca’s, but that’s another story), but for Maia, it’s too little, too late. With all that Maia’s been through in the last few years, she’s done playing nice. Blum’s an asshole, but he’s been a very successful one. Why not try it his way for a while?

My guess is that we’ve seen the last of Maia (at least for the time being). She’s sold her soul to the devil (or at least to his twin brother), and she’s headed for DC. It’s sad to see her go—very little of what brought her to this place has been in her control. I just hope she knows what she’s getting into. Blum will throw her under the first bus he sees if it means winning a case.

Reddick Boseman is also ending the season in a state of disarray. Even though they won, Blum’s lawsuit has probably done some damage to the firm’s reputation. Between that, the loss of their largest client (Chumhum), and the fallout from the Carl Reddick scandal, Adrian, Liz, and Diane have a lot of work to do to repair the firm’s now-tarnished image.

Issues of race (and, to a smaller extent, gender, and class issues) also continue to divide the firm’s members. And while we understand why Diane offers Julius’ partnership to Maia, it’s easy to see why Rosalyn and Lucca would view it as unfair. As much as I like Maia, I tend to agree with them. We know Lucca is one of the smartest and most talented attorneys at the firm, and we can assume Rosalyn is as well if she’s being considered (even though we haven’t seen as much of her). Now that Maia’s out of the picture, hopefully the other partners do the right thing.

The real question is whether Diane makes it out of Season 3 alive. The Good Fight is primarily her story, and so we’re 99.9% sure she’ll survive the “swatting” that’s been arranged by a now-vengeful Book Club. But will Kurt? And is there a SWAT team at Liz’s house as well? And what part will Diane play in “the resistance” going forward?

And with that, we say goodbye to The Good Fight until next season. Thanks for following along with us. Keep fighting!

‘What We Do in the Shadows’ Considers New Recruits, Citizenship in an Episode That Is Fine