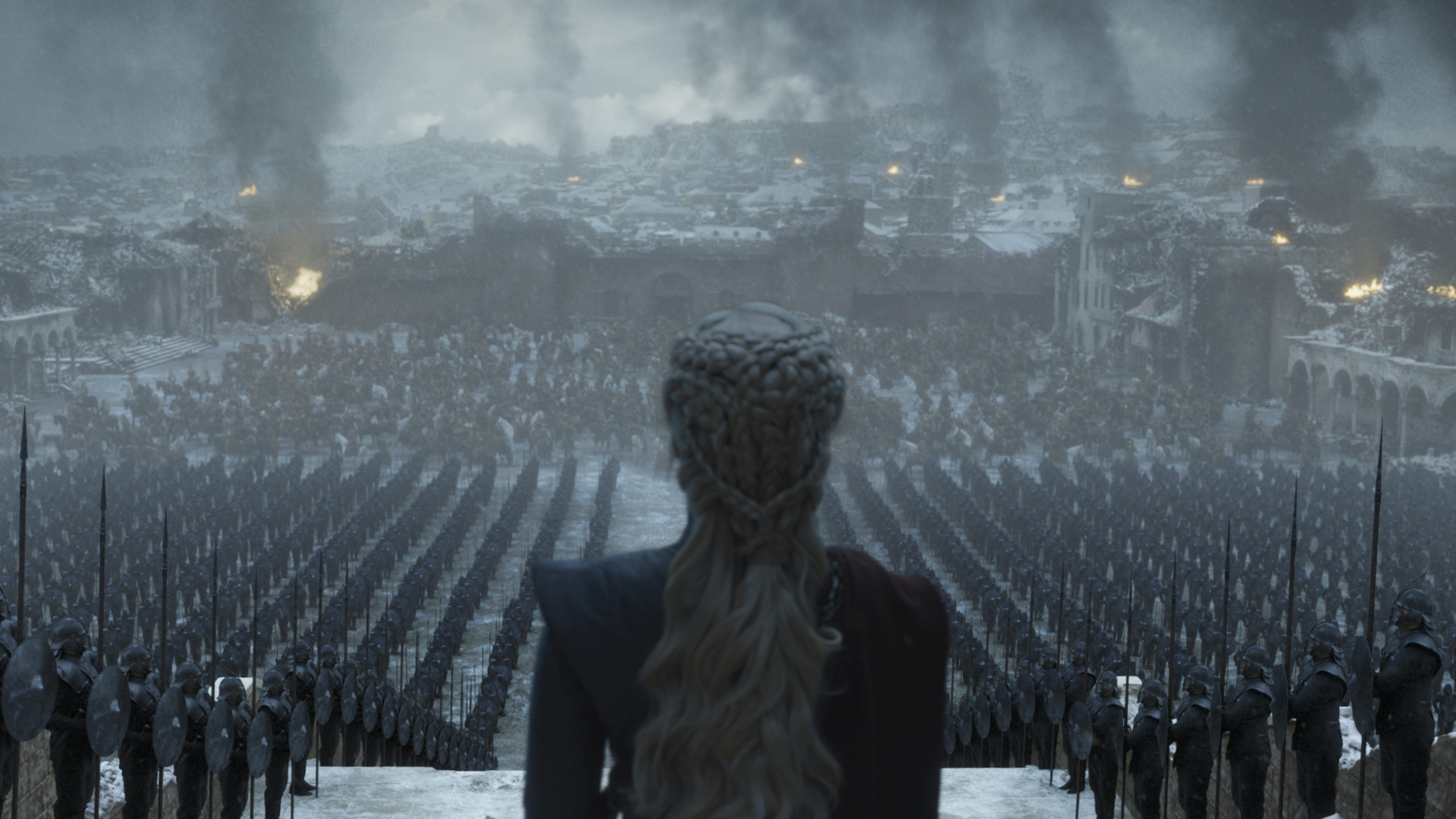 So Bran is not the Night King. Nobody time travelled and most of your other favorite internet fan theories did not come to fruition in the last of our 73 episode tour of Westeros. If you had told me beforehand that only a single, solitary character would die in the last episode of Game of Thrones, I wouldn’t have believed you. But man was that one death a doozy. Also, before we go any further, Jon showed Ghost some love in this episode. So all the hate over their brief farewell can be brushed aside. I can’t believe we’ve made it, but here’s our recap for “The Iron Throne,” the grand finale of Game of Thrones.

The first several minutes of the episode wanted to reinforce the fact that Daenerys killed a lot of children. There are a lot of dead people in the streets, but we only seem to zoom in on the children. I don’t think anyone has had this thought yet, but guys Daenerys may be the Mad Queen. Tyrion walks past a big destroyed bell to remind him of how his queen straight up ignored the surrender ding-dong. Jon attempts to stop Grey Worm from executing Lannister prisoners. But Grey Worm is mad. Something to do with his girlfriend misplacing her head.

Tyrion continues walking through the streets as slowly as humanly possible. It’s like he’s trying to decide on which Ben & Jerry’s flavor to get at the grocery store. Inside the Red Keep, he attempts to see if Jaime was able to escape but finds his siblings dead amongst the rubble. We knew they died last week, but this show has made us question every death unless we see the grizzly demise with our own eyes.

Outside the castle, Jon walks up so so many stairs to see Daenerys. The Unsullied and Dothraki are waiting for her. The Dothraki are hooting and hollering. (Apparently their complete and utter demise at Winterfell was exaggerated.) The Unsullied are all wearing their celebratory frowns. Hanging from some wreckage is a massive Targaryen banner like an American flag at a car dealership. Where did they get that thing? Did Grey Worm sew it during his down time? Daenerys announces Grey Worm as her Master of War. She then says she is going to continue liberating people all over the world. Yeah, she sounds crazy. She’s definitely crazy. But she used to be so fun. Remember when she burnt all those morally ambiguous foreigners alive and stuff?

Tyrion points out all those past transgressions to Jon soon after the Hand of the Queen gives his best, “you can’t fire me, I quit” moment by chucking his Hand pin down the stairs. In his cell, Tyrion tells Jon some of the specific moments we should have seen this version of Dany coming. Crucifixions, mass burnings, etc. Jon quotes Maester Aemon by saying “love is the death of duty” Tyrion turns that over saying, “Sometimes, duty is the death of love.” He says, like Jon, he loves Daenerys too.

It has begun to snow on King’s Landing as Jon approaches the Red keep. Drogon shakes the snow off himself and allows Jon to enter. We get the shot Daenerys saw in the vision at the House of the Undying back in season two. The snow falls on a broken throne room as she approaches the Iron Throne. Jon comes in after her.

She begins to tell him about her brother and the stories he used to tell about the throne. No small talk, I’m Jon Snow! There are dead children! Prisoners are being murdered! If you want me to be more subtle, go back to season four! They go back and forth about mercy and good people and whatever. It sure sounds like Daenerys plans to kill everyone though. They share one last kiss and then Jon stabs her. We were all rooting for Daenerys since day one. But once she roasted the city, no backsies.

She dies in Jon’s arms as he sobs. Drogon joins them attempting to nudge her awake. Poor Drogon. It’s not your fault yo mama went nuts. In his anguish, he spits fire all over the throne room. In some heavy-handed symbolism, he melts the Iron Throne. Daenerys never even sat in it. Now no one else will. Drogon lifts up Daenerys and flies away.

After a time jump of a few weeks, Grey Worm leads a shabby looking Tyrion into the dragon pit. Waiting for him are many of the high lords and ladies of Westeros. Sansa, Bran and Arya are there along with Brienne, Davos, Sam, Yara, Gendry, Robin Arryn, Yohn Royce, Edmure Tully and some other characters we don’t know but can infer their home kingdoms from their clothes. Sansa demands they release Jon, but Grey Worm says he is their prisoner and King’s Landing belongs to him and his forces. Davos pleads with him to avoid more fighting and says the Unsullied can take the now vacated lands in the Reach. But Grey Worms wants justice not payment.

Tyrion chimes in that this should be the king or queen’s decision. Since they don’t have one, this gathering of the most powerful people in Westeros would be a great place to choose one. Sansa shuts down the clownfish of Riverrun, Edmure Tully when he throws his name in the ring. Sam tries to pitch a general election and make democracy happen. The others don’t buy that one either. Tyrion suggest a different route. Bran the Broken? Sure, but can we change my nickname? What about Bran the Badass or Bran the Birdman?

Tyrion makes a good case for him. Bran knows everything from history and is an example of breaking the cycle that got everyone into this mess. Then after his reign, this council would meet again and pick a successor. Everyone goes for it… except Sansa. I kind of thought she would be salty when Bran was suggested over her and sure enough she says the North has lost too much to kneel to a king. They’ll remain an independent kingdom like they always were. Yeah, but most of these other kingdoms lost tons of people in these wars too. Like the North, they were independent before Aegon. But sure Sansa, what the hell. So Bran becomes the new King of the Six Kingdoms and Tyrion is his hand.

Grey Worm still won’t accept Jon being freed though. I guess the assassination of Daenerys was kind of a big deal to him. So get this. As punishment, Jon will be sent to serve in the Night’s Watch for the rest of his life. To be honest, he’ll definitely enjoy that more than being king. To wrap up some other loose ends, we learn that Grey Worm is going to sail the Unsullied to Naath just like he and Missandei had talked about. Arya plans to find out what is west of Westeros and sets sail away from the continent. Sansa gets her crown and is hailed as Queen of the North.

In King’s Landing, we see a glimpse of the beginnings of Bran’s reign. His small council convenes with Tyrion at the head of the table. Bronn, who is now the Lord of Highgarden, is the Master of Coin. Davos is Master of Ships. Sam is the new Grand Maester. He delivers the Archmaester’s new book, A Song of Ice and Fire to Tyrion. Wink, wink. Get it? That’s the name of the book series the show is based on.

Brienne is apparently the Lord Commander of the Kingsguard. She takes a few minutes to update Jaime’s mostly empty pages in the Book of Brothers, which lists the accomplishments of those who serve on the Kingsguard. Ser(!) Podrick is also one of the Kingsguard serving Bran. I imagine the office parties for this small council are super fun. Bran leaves the everyday tasks to his advisors as he is off to try to find Drogon with his raven powers.

The show ends up at Castle Black. The opening scenes of the series had a group of rangers encountering the White Walkers north of the Wall. It ends with Jon, Tormund and Ghost reunited and leading the Wildlings back north to their home. As the tunnel closes, Jon gives a look back. Is he planning on ditching the Night’s Watch and becoming one of the Free Folk? Or maybe he’s just happy to be back in the snow and rid of dragons, White Walkers and politics. Honestly, he’s probably just really tired. It’s been a tough eight seasons for him.

With that, it’s actually over. No more Game of Thrones to dominate our Monday morning conversations. Now we can turn our attention to HBO’s new spin-off prequel series they’re developing and of course George RR Martin’s novels. But those aren’t quite the same. What a fun ride this has been. I have been writing Game of Thrones recaps for Geek Insider since season three. And now my watch has ended… What is dead may never die! Maybe we’ll meet again to recap the next Westeros show or maybe I’ll just ride North with Tormund and retire.