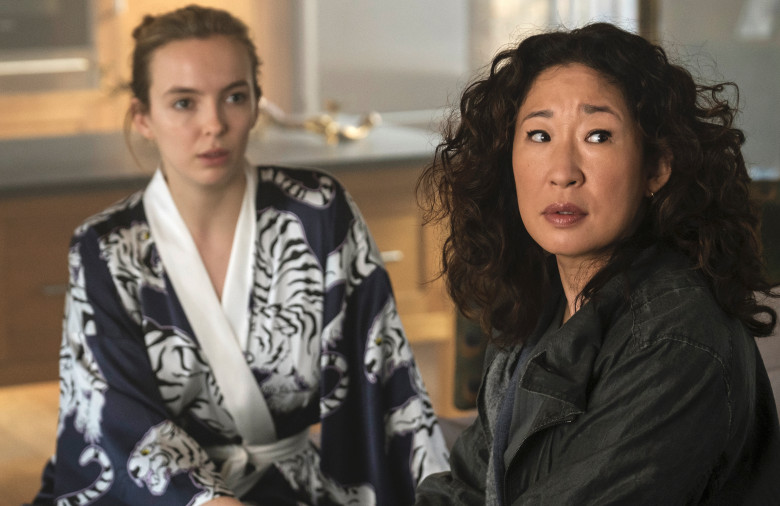 Of all the people we’ve seen Villanelle murder over the course of two seasons, Gemma may be the most tragic. She’s not an international criminal or a powerful executive. In fact, her only real “crime” is falling in love with a married coworker who just happens to be married to a woman who’s also in a very complicated relationship with a jealous psychopath. Her death is simply a message from Villanelle to Niko: Eve’s mine. Leave her alone.

That final shot of Gemma in the storage locker also serves to remind us that, despite the fact that she’s joined the “good guys” and is helping Eve, Villanelle is still the same cold-blooded killer she’s always been. And Eve desperately needs to remember that. No matter how chummy they get, or how many intimate moments they share, Villanelle simply can’t be trusted. She’s like those stories you hear about people trying to domesticate dangerous animals—no matter how much a wild beast seems to “love” you, you can’t change its true nature. And if you don’t take the proper precautions, you’ll probably end up dead.

Where past episodes have simply hinted at it, “Wide Awake” leaves no doubt about Eve’s attraction to, and obsession with, Villanelle. Similar to her experience with Niko after he tells her about Oxford, sex with Hugo is really about Villanelle—Hugo is simply a prop. And Eve’s conversation with the psychopath expert is even more telling as she finally admits to herself that this “relationship” is affecting her in a pretty serious way.

The really sad part is that, when it goes south (as it inevitably will), Eve will have only herself to blame. She’s been ignoring the warning signs for months, and everyone from Kenny to the psych expert is telling her to back away. With all of her experience (both as an intelligence officer in general and with Villanelle in particular), she of all people should know better. But her obsession has clouded her judgment to the point that she’s willfully ignoring the danger.

Were it not for a few not-so-subtle reminders of what Villanelle’s really like (like the aforementioned dead body), it would be easy to actually cheer for the two of them and hope they make it. Anyone who has to endure Aaron Peel for more than a millisecond automatically earns our sympathy and respect regardless of her past homicidal tendencies. The guy’s such a control freak that even someone like Steve Jobs would have said, “Hey, buddy—take it down a notch.” I don’t know what’s the scariest part—the fact that he micromanages every aspect of Billie’s wardrobe, that he derives an inordinate amount of pleasure from watching her eat, or that he spies on her constantly (along with the rest of us, apparently). If he only knew what she was really capable of…

The fact that she hasn’t shoved an ice pick in his eye or strangled him with razor wire is a testament to the fact that, on some level, she really does want to make Eve happy. Sure, her motives are purely selfish—if Eve’s happy with her, she gets what she wants (at least for awhile). And Eve’s one of the few people (maybe the only one?) who doesn’t bore her to tears, which is a very important thing for her. So she’s on her best behavior (relatively speaking), and she’s trying to play her role and follow the rules.

But no matter how charming she appears or how cooperative she is, she’s still the same Villanelle that’s killed a dozen or so people (that we know about) in some of the most creative ways imaginable. If you ever doubt that, just remember poor Gemma. Let’s hope that’s not the way Eve ends up.