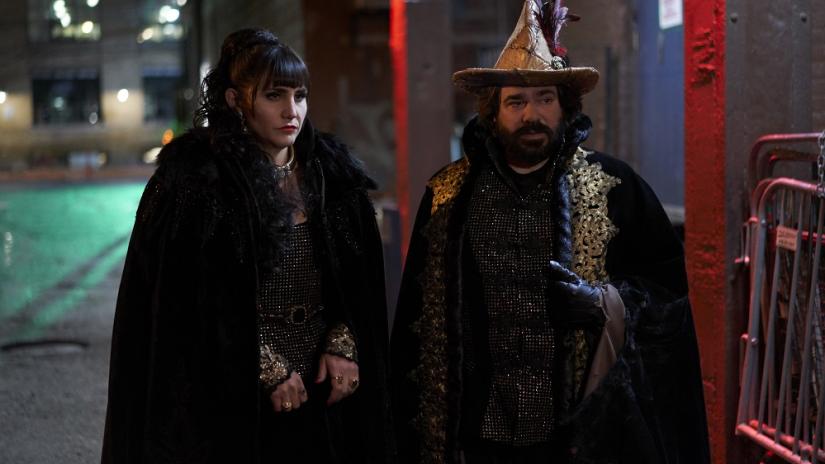 Midway through what was an all together very enjoyable and absurd fourth episode of What We Do in the Shadows, I found myself wondering if the shows are being aired in the order they were initially intended to, or if there has been a bit of a shuffle, cementing myself as clearly a very cool person with aggressively clear priorities. Guess which part of that is a lie. The thing is, one of my criticisms last week, gentle though I think it was, was rooted in a failure to follow-up in any way on two seemingly important narrative lines – one, Nadjia’s decision to turn Jenna into a vampire and two, the vamps attempts to gain dominion over, at least, New York. This episode, however, did revisit both of those things, in a way that seemed to suggest perhaps it should have been aired prior to last week’s episode. Thus my super fun rumination.

Nandor, Nadjia, and Laszlo realize that their stranglehold over their own street and Ashley Street is not terribly impressive, so they attempt to branch out and form an alliance with another, more powerful vampire, Simon the Devious. Good news, it’s Nick Kroll. Their memories of Simon are dated and they set out to his upscale vampire club in flowing capes and – fantastically – Laszlo’s cursed witch skin hat. It’s a very stupid hat, and also probably the star of the episode. Yes, Matt Berry does – as always – the lord’s work by the simple act of being Matt Berry and wearing the most shit eating of all possible grins while donning the hat, but really…the tam is doing the heavy lifting. It is such a phenomenal piece of costume. Nadjia has precious little patience for it or the path of destruction it leaves in its wake.

Direct results of the curse: Nadjia and Laszlo’s new familiar gets crushed by a book-case, Laszlo falls through the floor, the cab they ride to Manhattan (or “Mana-hatta,” if you go by Laszlo’s pronunciation…) stinks, a man on the sidewalk looks sad, Laszlo’s cape gets stuck twice in the cab door, and Guillermo flat lines a couple of times (more on that later). I could genuinely talk about that hat for seven pages, but I won’t, I promise.

When our four vamps (Colin Robinson of course tags along) and Guillermo arrive at Simon’s club, Nadjia immediately finds Simon, wearing a genuinely ludicrous red satin suit and a mullet that would give the stoutest sailor the piss shivers, and explains their general dilemma. Simon summons all of our vamps (minus one Colin Robinson, who no one ever wants around) into a secret room, to catch up and name his terms, and this is where I immediately break my promise to not talk about that astounding bit of headgear again, because Simon’s primary demand and purpose is to get Laszlo’s hat, by any means necessary. Once he has, he kicks the vamps out and shoots a flaming arrow that ignites his entire club. Because it’s a stupid bloody hat, with a stupid bloody curse on it, to quote Nadjia.

Guillermo gets a bit of his own plot this week, as he discovers the familiars room while looking for the bathroom. There is a little more conflict developed now between Nandor and Guillermo, as it becomes apparent when he tells the other familiars that he has been in the business for ten years, that that is considerably longer than traditional for that occupation. When Guillermo leaves the room, a vampire wants to eat him, and Guillermo is – justifiably – upset when Nandor seems comfortable deferring to the vampire. Guillermo storms out, but Nandor finds him after Simon kicks the vamps out of the club. As an apology, he flies Guillermo over the city, a gesture which is appreciated until Nandor gets distracted and drops Guillermo several stories.

In the hospital, the vamps check in on Guillermo, and as they go to leave, Laszlo spots a bandaged Simon, and – hot damn – a certain beloved, cursed hat, which he takes back, puts on, and immediately flat lines Guillermo. When he takes it off, Guillermo comes back. It’s a wonderful, stupid gag.

There is still a ways to go with Jenna as a vampire, but this episode’s cold open showed her terrifying her roommate by being functionally dead, but also running away from the paramedics who declared her so. I’m not sure where they’re going with her, but it was good to see her revisited – good to know that the writers have not just forgotten a thread they began.

So where do we go from here? I doubt that our vamps will have much success dominating New York, but I suspect and am hopeful that we will start to see a little bit of intensity ramped up regarding the pressure to do so.

And if we’re very lucky this won’t be the last we see of a certain cursed hat….

FXRecapvampiresWhat We Do In The Shadows

‘Gotham’ Ends Its Run With the Finale We Really Didn’t Need–Surprisingly, It’s Not Half Bad