Here’s how it works. You send Vinyl Me, Please some of your hard-earned money (plans start at $27/month) and they send you one meticulously selected album worthy of your time and attention. Easy, right? Each custom pressing (often on colored vinyl!) also comes with special features like original artwork and even a recipe for a companion cocktail. You’ll have membership privileges in the VMP shop too, which means you can grab a copy of previous VMP selections from the archives – including their Classics Edition reissue of Buddy Guy’s Left My Blues In San Francisco – not to mention a bevy of rare and exclusive releases. The store is now open. It’s chock full of sexy new discs that need a loving home. And Team VMP are dropping fresh new selections to their stock every single week. Do not miss out. 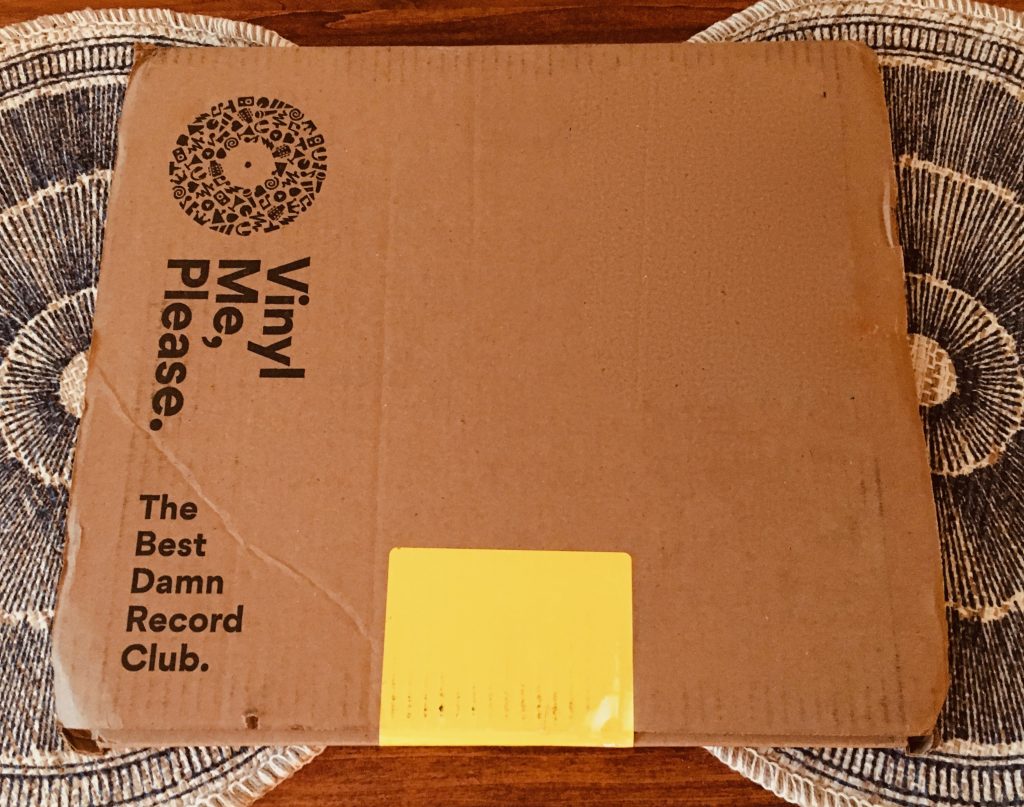 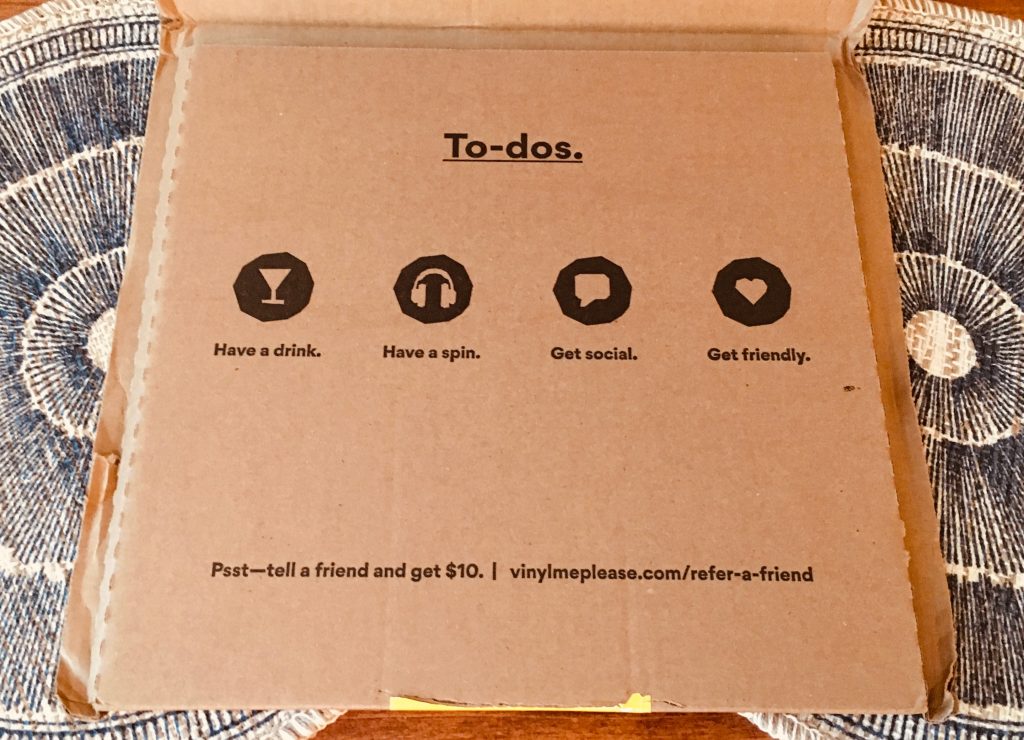 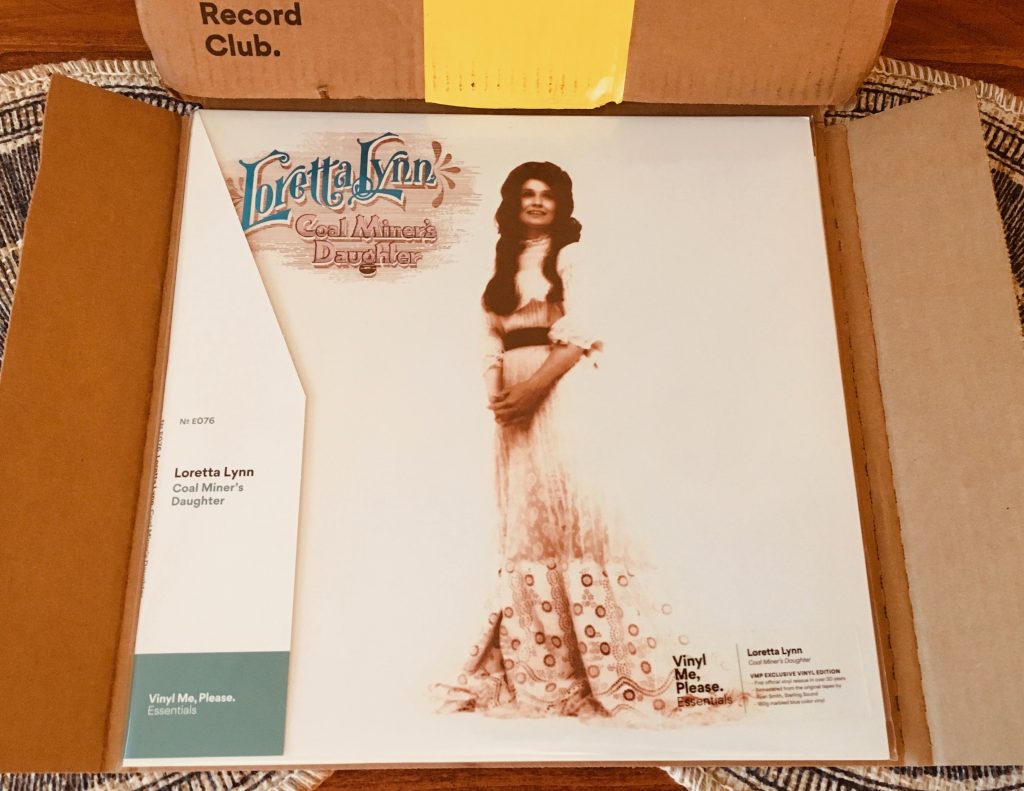 Alright, I’m gonna try my best to keep things brief this month, if only because there isn’t much I can say about Loretta Lynn’s Coal Miner’s Daughter that hasn’t already been said, and said by far more clever people than myself. The album has, after all, inspired both a lauded book and an award-winning movie (starring Sissy Spacek and Tommy Lee Jones no less). What I can say of Coal Miner’s Daughter is that I was less than convinced it would live up to the Essential label when Vinyl Me, Please announced it as the April selection.

That has a lot to do with my general wariness of country music (a genre I personally believe hasn’t been even remotely interesting since the ’70s). The only reasons I didn’t swap this month were that: 1) I grew up in the south, and I have fond memories of hearing Lynn’s voice while riding around town in my grandmother’s Cadillac, and 2) It turns out that Coal Miner’s Daughter hadn’t been issued on vinyl in nearly 40 years.

Right now, I’m imagining your jaw hitting the floor – like my own did – at such a fact. Surprising as it may be, prior to this glorious new pressing, Loretta Lynn’s outlaw masterpiece really hadn’t seen a vinyl release since 1981. If there’s one thing I’ve come to know about Vinyl Me, Please since signing up, it’s that (even if I disagree) their team is second to none in terms of not just identifying albums that deserve a new release, but making damn sure that album is worthy of the title Essential. Rest assured, Coal Miner’s Daughter more than fits the bill on both fronts.

Of the 11 tracks Lynn delivers on Coal Miner’s Daughter, they’re very much of the intensely biographical sort, with Lynn’s songs (even the ones she didn’t write) covering everything from growing up dirt poor in the backwoods of Kentucky, lost love, new love, and fiery love, and perhaps most importantly, songs about what it meant to be a tough-willed woman in a world run by men. As you might expect with that information on hand, Coal Miner’s Daughter is not just a slick title for a country album. It is, in fact, the story of Loretta Lynn’s life. One that charts the dramatic highs and lows of a true blue country girl’s ascent from poverty, a tumultuous marriage driven by hard-drinking, hard fighting, and hard loving, and the trials of powerful woman who refused to let difficult circumstances define her life.

In the end, life itself is what’s fueled the proverbial fire of Lynn’s music for nearly seven decades now. Lynn’s uncanny ability paint her own life (with its good times, bad times, and everything in between) in such vivid detail is why her music continues to transcend its honky-tonk heritage, and find open minds and hearts in fans from all walks of life. Coal Miner’s Daughter is the first of Lynn’s albums to truly achieve that feat. If you’ve never had the pleasure of hearing Lynn’s story, this stunning, insanely long overdue reissue from Vinyl Me, Please will let you hear it like never before.

Coal Miner’s Daughter is about as classic a country album as has ever been released. And that oh so elegant cover art is the very picture of classic. 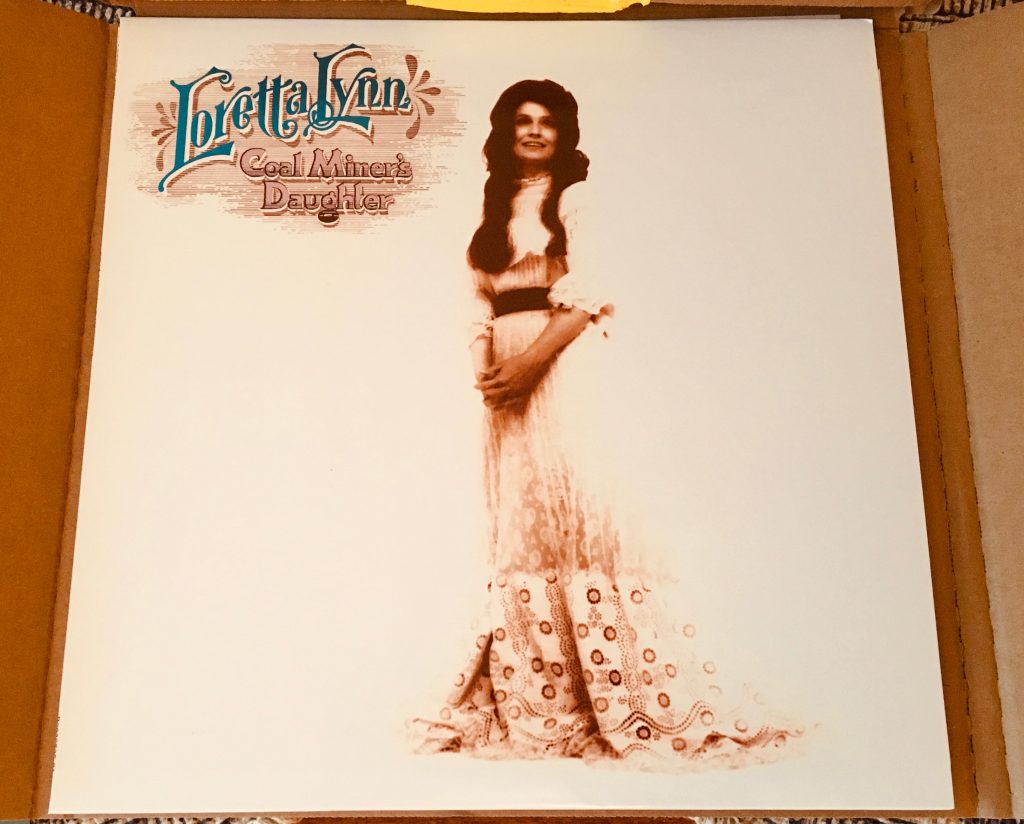 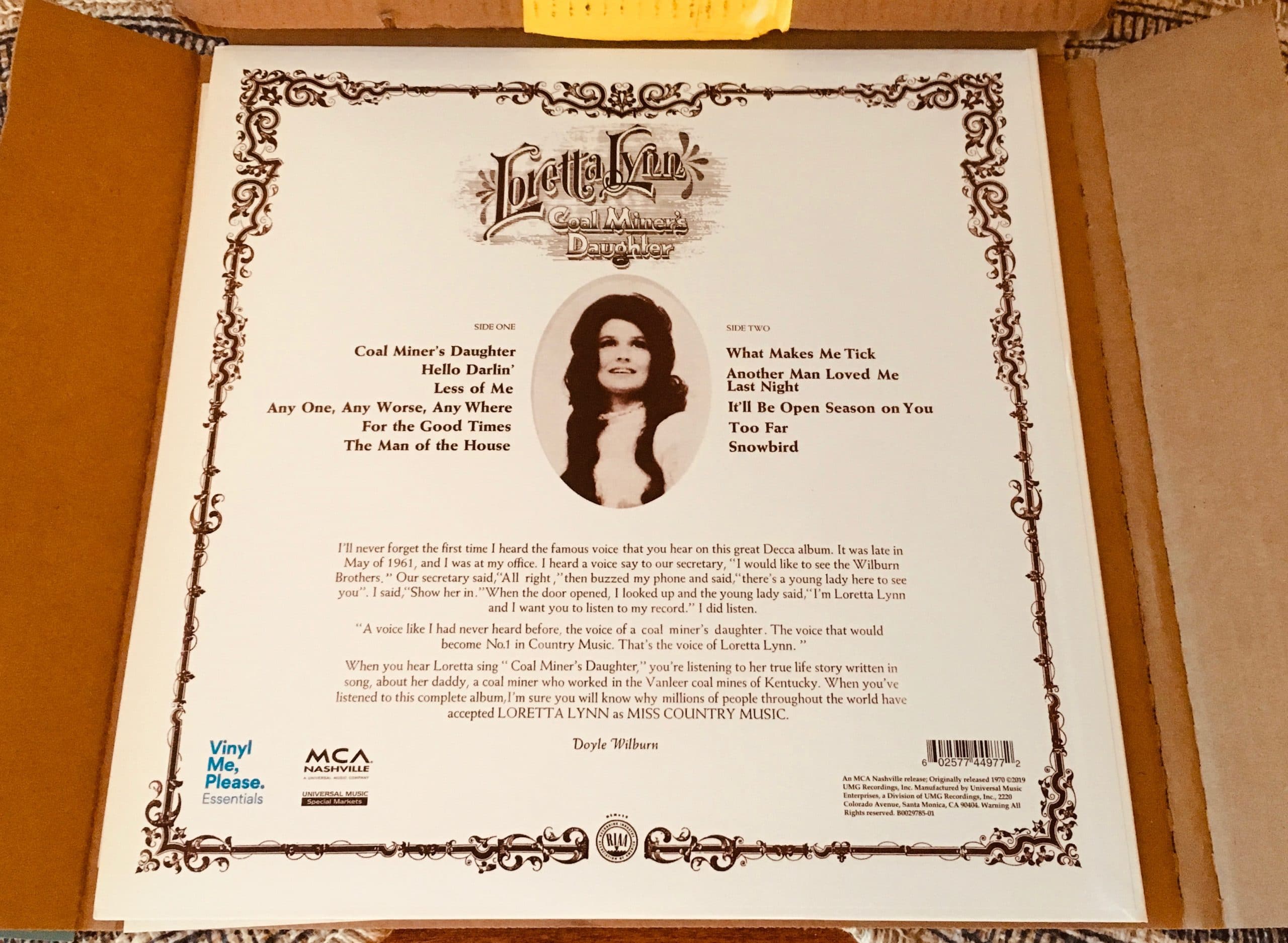 Before we get too far ahead of ourselves, let’s take a butcher’s look at the detail in that cover, ’cause even in its classic appeal, it’s still a bit of a stunner. You’ll want to pay particular attention to the blue in that titling, as well as the lightly foil stamped texturing. 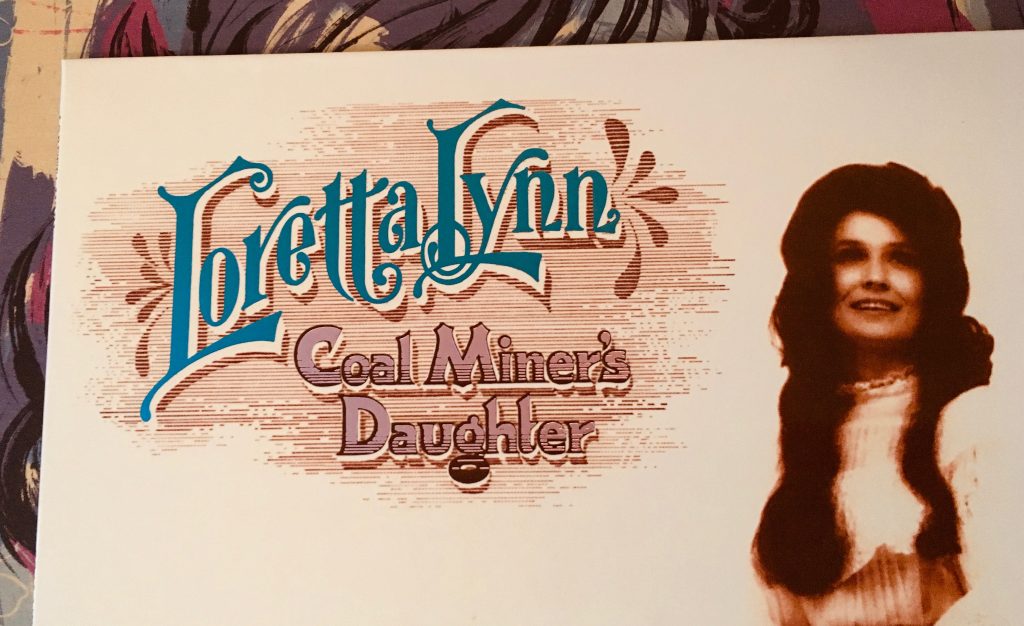 Not to mention a few kind words from country legend Doyle Wilburn on Lynn’s particular sort of genius.

And of course, you’ll want to note the important bit of foil-stamping in the bottom corner that officially denotes Coal Miner’s Daughter as an Essential album. 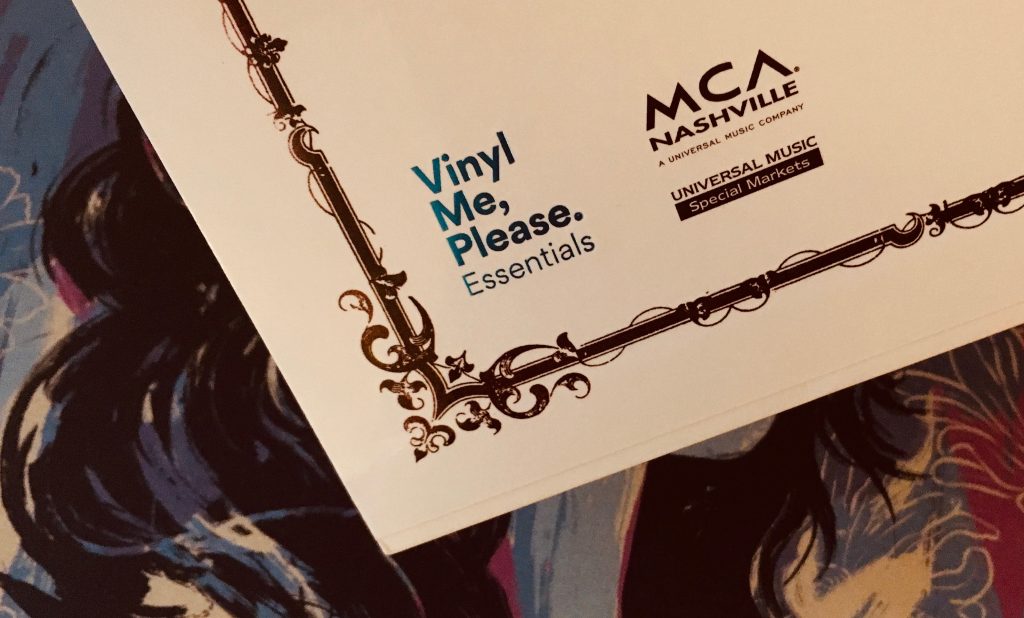 Of course, before you remove this album from its resealable (brilliant!) sleeve, you’ll also want to note the details on the VMP hype sticker. 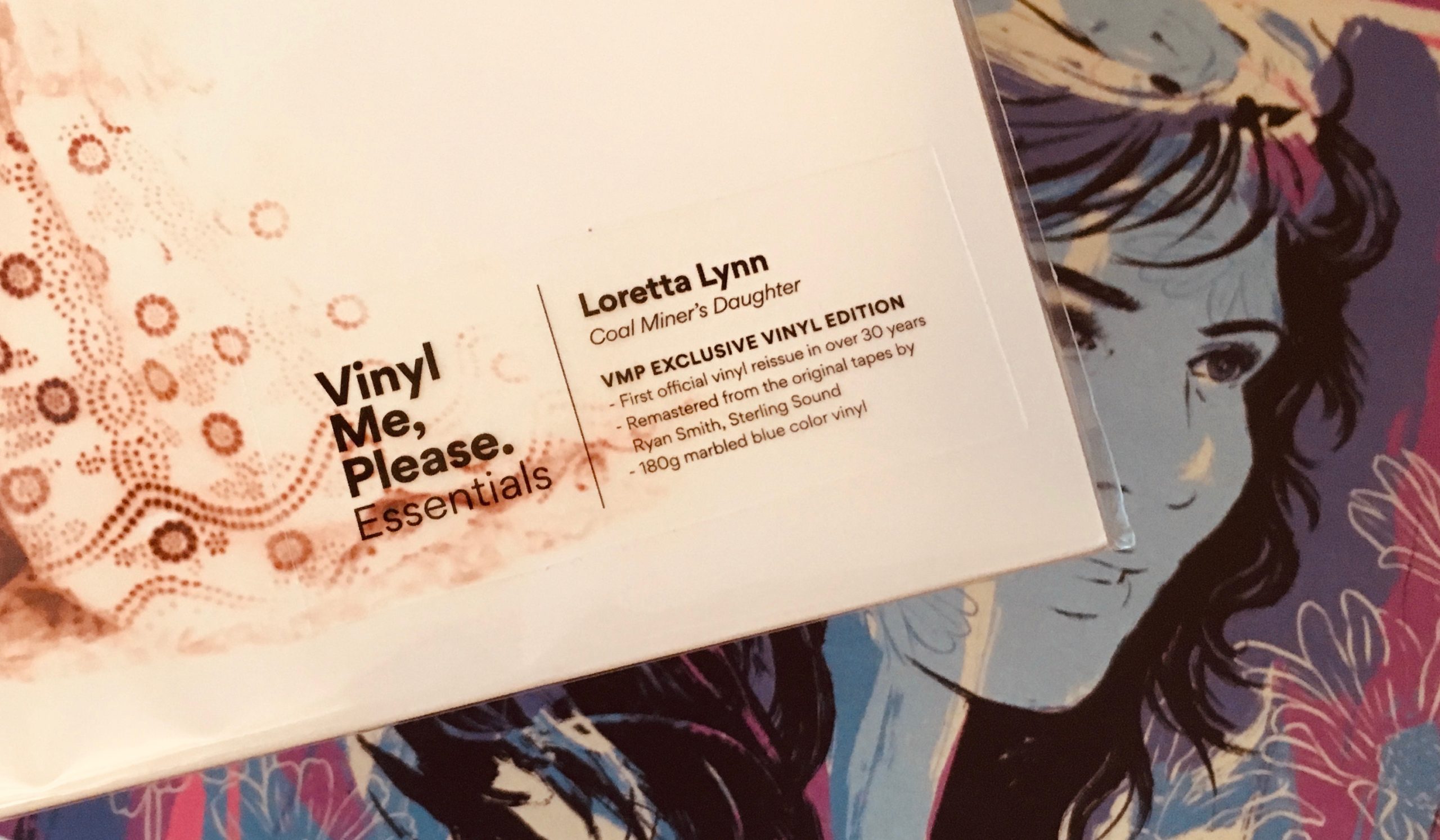 Once that protective sleeve is out-of-the-way, you’re gonna want to spend a few moments soaking in the details on the obi-strip … like the album’s title, artist name, and the VMP catalogue number. Exclusive vinyl pressing? Check. First official resin in over 30 years? Check. Remastered from original tapes? Check. Colored, 180g wax? Check. You’d better believe this is the essential release of Coal Miner’s Daughter. 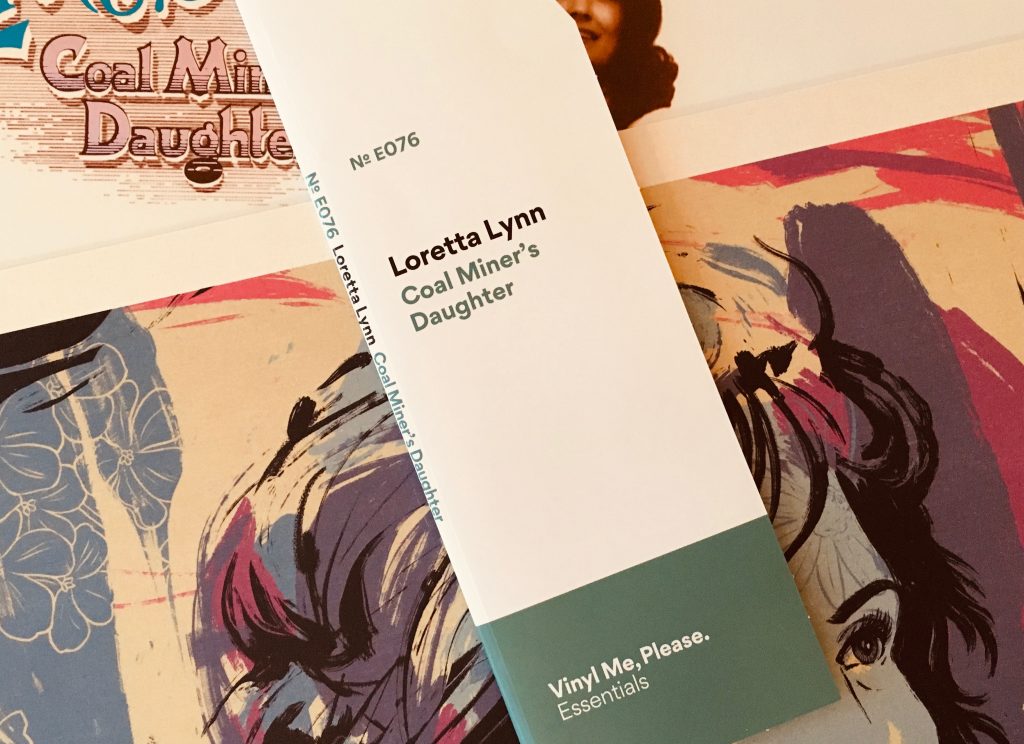 There’s also a few choice words about why Loretta Lynn’s Coal Miner’s Daughter made the cut as a VMP Essentials release. 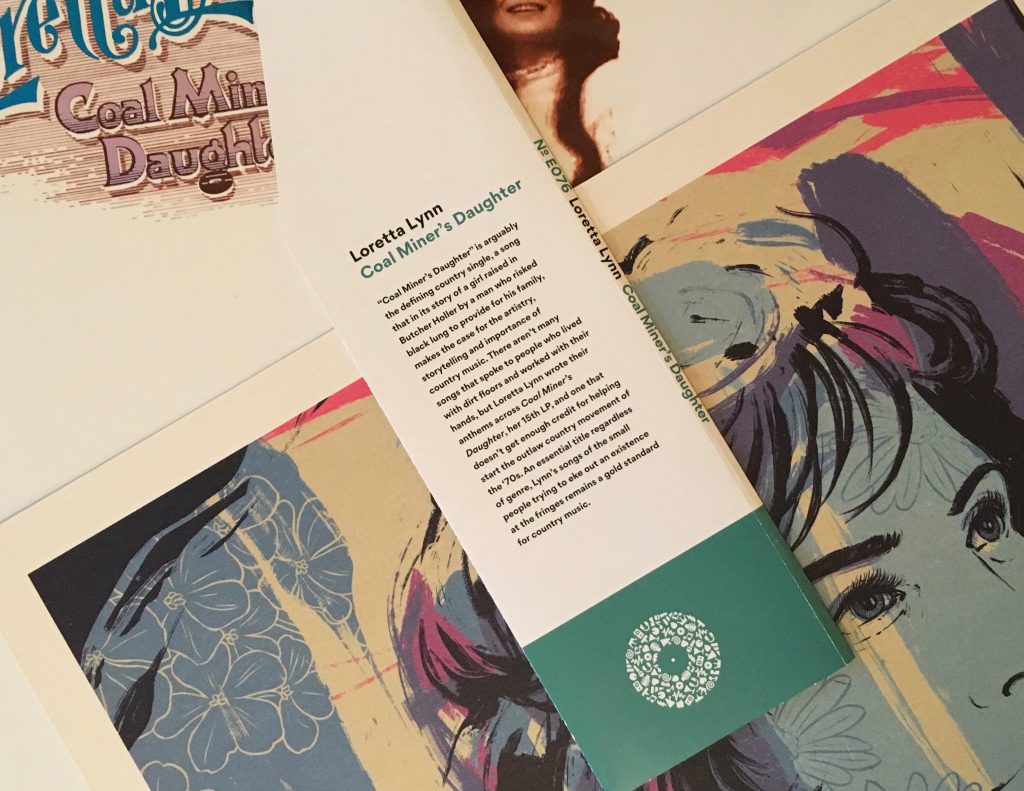 And if you’re the sort who likes to enjoy an adult beverage while you groove, you’ll definitely want to do some sipping’ on a “Daughter’s Margarita” while you get down with Coal Miner’s Daughter. I’m not one for Margaritas myself, but I have to admit that this does sound tasty. 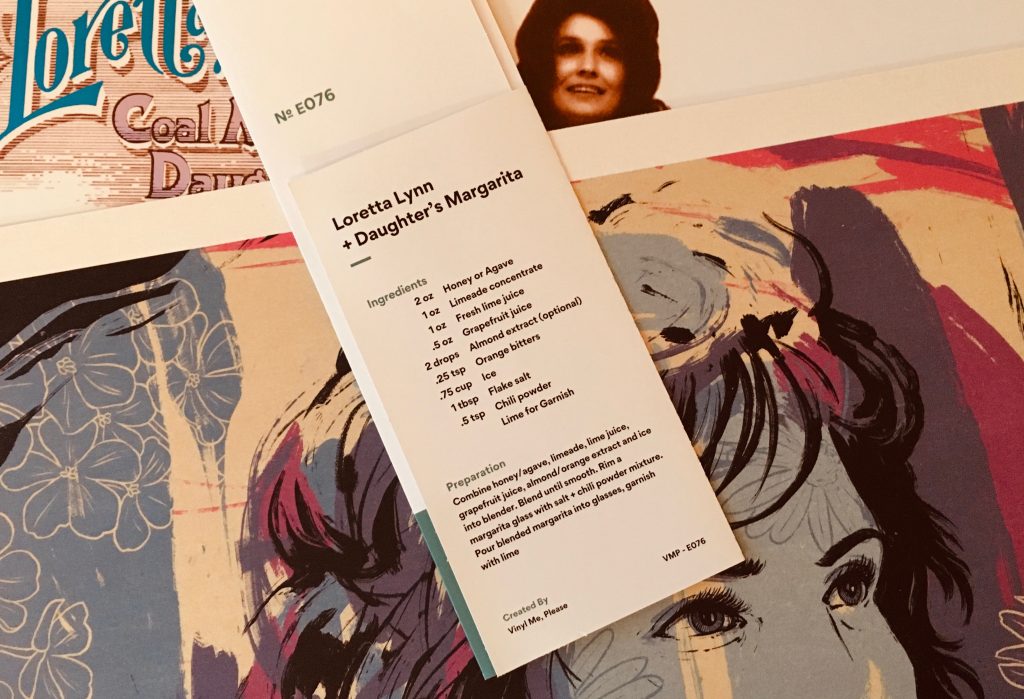 As always, one of the cooler things about Vinyl Me, Please Essentials releases is that they come with original, album-inspired artwork. And I gotta say, this month’s print sets a new standard for the Essentials artwork. 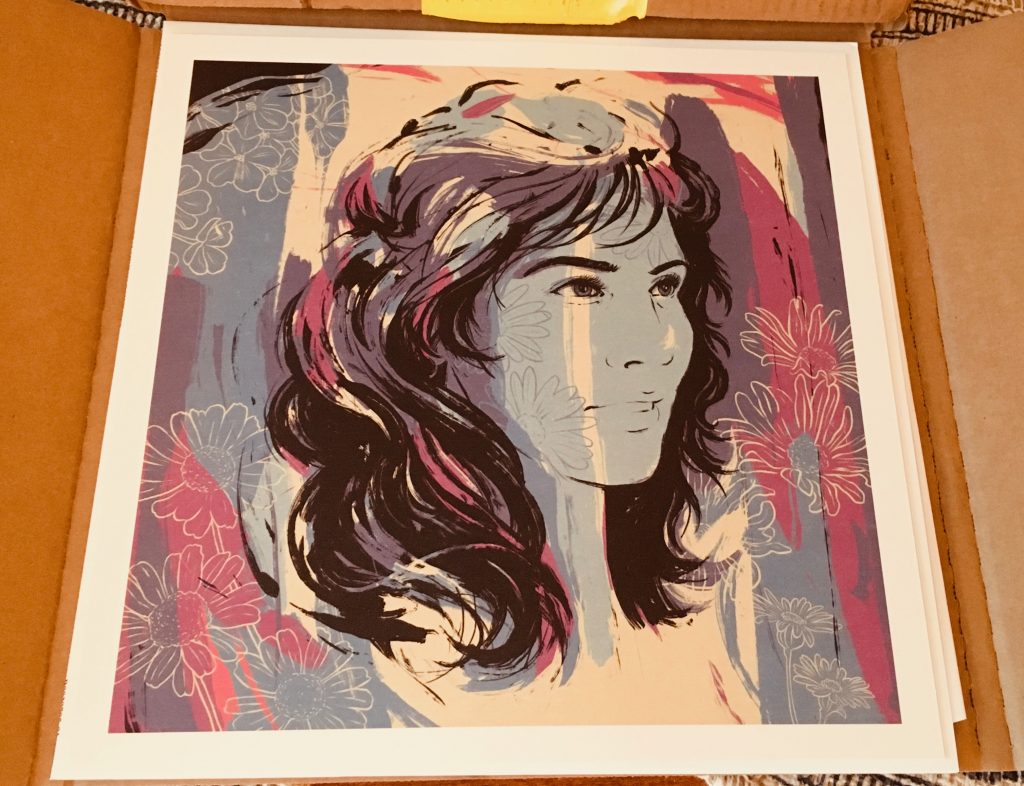 Remember when I told you to note the blue in the titling on the album’s cover. There was a reason for that, and it’s because Team VMP actually went through the trouble to color-match their vinyl to that particular shade of blue. Yes, it’s as pretty as you might imagine. 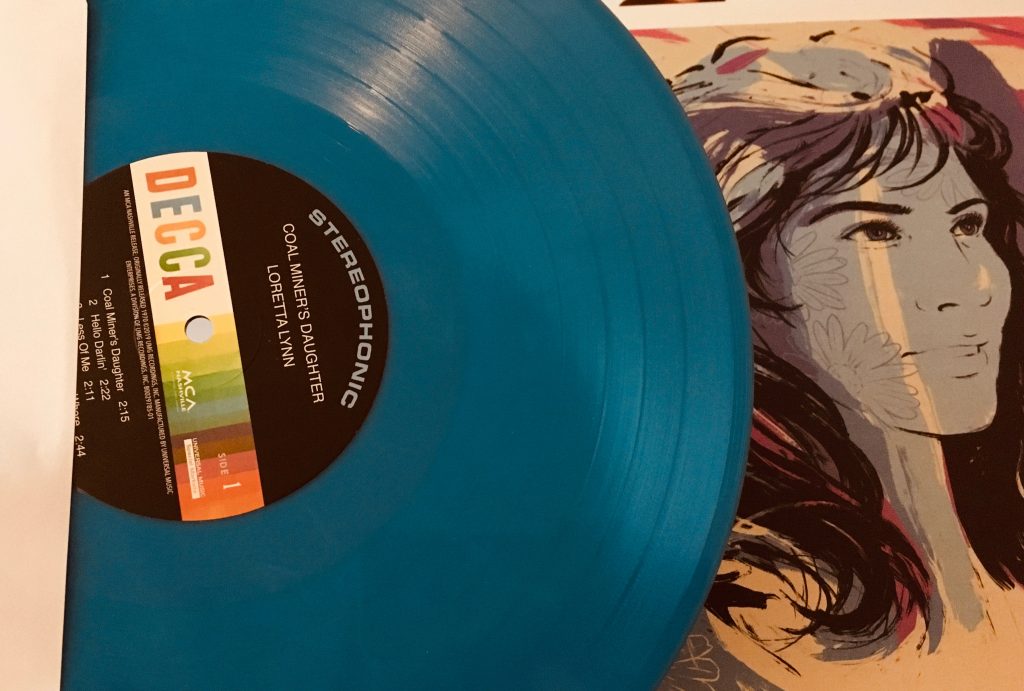 Take a moment to dig on that classic old Decca Records label as well, ’cause details are a big part of what makes a Vinyl Me, Please release so damned special. 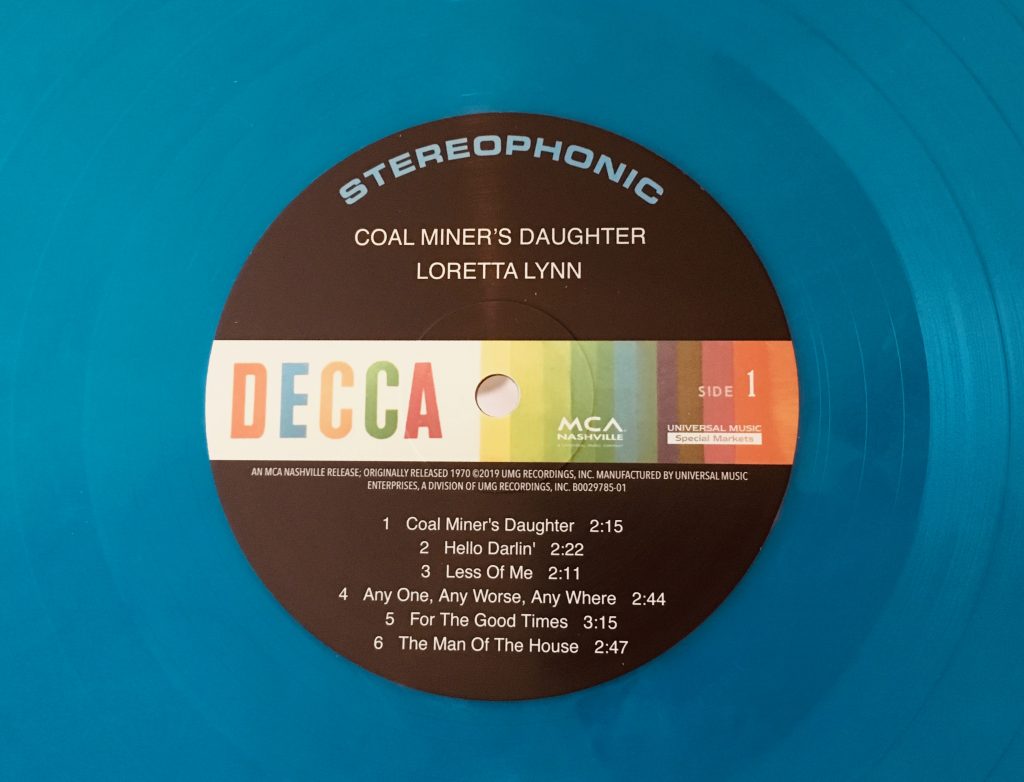 And yeah, it’s gonna sound every bit as good as it looks on your deck. 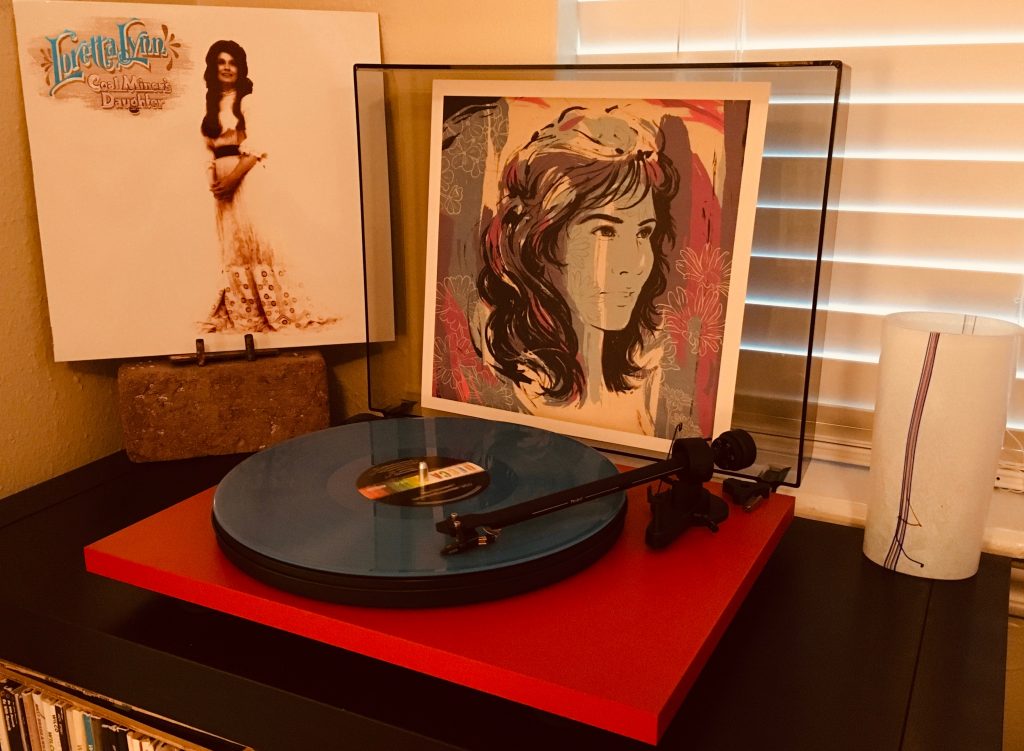 How’s it sound? Like waking up alone in a strange bed after a night of heavy drinking. Your head is splitting, your mind is ablaze, and your heart is dazed. As you search to make sense of your situation, you hear the faint sound of singing just outside a window. The voice is tender and tousled, and seems to understand without judgement the how’s and why’s of not just where you are in the moment, but where you are in the universe. Any semblance of shame fades away. An uneasy calm washes over you. And you listen in hushed reverie until the song is over.

I know, I know, country music is a little harder sell as an Essential album than most genres. Vinyl Me, Please knows that too, and their Essential country picks have reflected that. I wasn’t in total agreement for their previous country pick (and swapped Townes Van Zandt for some sweet Stax action), but Loretta Lynn’s Coal Miner’s Daughter is a country album that truly transcends the genre. It’s about as Essential a release as an album can be, and the fact that it was out of print for over 30 years is still a bit baffling. Thanks to Team VMP for finally getting this landmark release back in circulation, and for doing so with such lavishly stylish fashion!

A big THANK YOU to our friends at Vinyl Me, Please for sponsoring this subscription. Don’t forget to check out the official Vinyl Me, Please website and sign up to get some choice wax delivered right to your door each and every month! Can’t wait to see what sexy wax they send our way in March!