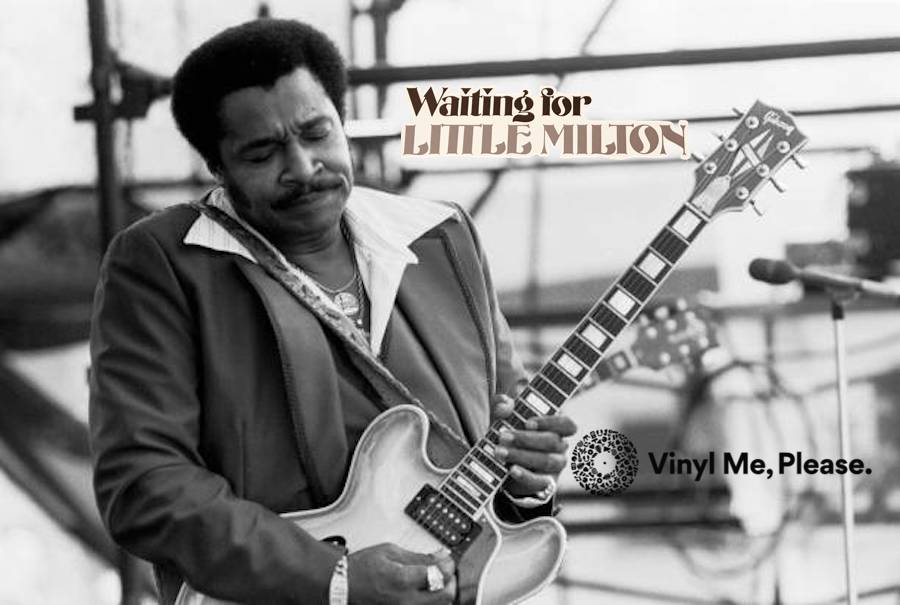 Here’s how it works. You send Vinyl Me, Please some of your hard-earned money (plans start at $27/month) and they send you one meticulously selected album worthy of your time and attention. Easy, right? Each custom pressing (often on colored vinyl!) also comes with special features like original artwork and even a recipe for a companion cocktail. You’ll have membership privileges in the VMP shop, which means you can grab a copy of previous VMP selections from the archives – including September’s Essentials pick, a gorgeous reissue of, Feist’s Let It Die – not to mention a bevy of rare and exclusive releases. The store is now open. It’s chock full of sexy new discs that need a loving home. And Team VMP are dropping fresh new selections to their stock every single week. Do not miss out.

Whatever styles or artists or limited edition pressings you’re looking for, you’re bound to find something in the VMP Store. While the store is open to the public, many of the more covet-worthy selections are only available to members, so you’ve gotta sign up to get your mitts on them. If you’re peckish about relinquishing control of your record collection over to complete strangers, know that VMP’s Swaps Program is in full effect. That means you can flip any VMP pick you don’t like for a past AOM (or other VMP Exclusive pressings) that’s a little more your speed. My advice? Don’t overthink it. Do yourself a favor and sign up today.

So, what’s in our box for October? Nothing less than a freshly remastered pressing of Little Milton’s bluesy soul classic Waiting For Little Milton.

For the Love of Music, Please DO NOT BEND (or, how I learned that VMP Classics got blues for days, but Little Milton got the blues for real)

Ok, October’s Essentials pick is a country/folk classic from Townes Van Zandt. It’s called For The Sake Of The Song, and while you’re probably thinking, “how the hell could you swap on a Townes Van Zandt album?,” I’d offer two thoughts: 1) I live in Texas, so I’m sort of required to love Townes Van Zandt, but 2) I find a lot of his early recordings – when he was vying to fit in with the Nashville sound – to be far too cleanly produced. So while I love many of the tracks on For The Sake Of The Song (“Waiting Around To Die” and “I’ll Be Here In The Morning” are outright classics), I prefer Van Zandt’s sound when it’s stripped down to just him and a guitar. That makes his Live At The Old Quarter, Houston, Texas the only Van Zandt release worthy of my own collection.

Which is ok, because Vinyl Me, Please’s Swaps Program is just one of the features that makes them the best damn record club out there … and when they keep choosing killer albums like Waiting For Little Milton for their Classics subscription, there’s no reason not to make that Classics pick your true Essential.

If you’re not familiar with Little Milton, know that he was one of the preeminent figures in shaping the sound of modern blues/rock/soul music. Know that he cut his teeth at Memphis’ legendary Sun Studios in the early ’50s before Elvis ever set foot in the building. Know that he made his name as a bluesman with Chicago’s legendary blues label Chess Records – and actually convinced blues icon Albert King to sign there as well. And know that, though Milton never achieved the same celebrity, he was regarded as a blues great on the level with B.B. King through the ’50s and ’60s, and his uniquely rangy voice allowed him to tinker with proper soul music throughout his lauded career. Milton’s voice and versatility are what made a jump to Stax Records an obvious move in the early ’70s.

The bluesman’s first proper album with Stax – 1973’s Waiting For Little Milton – may well be Milton’s most complete release, the seven songs within forming a lavishly blended crossroads of rock & roll and blues as filtered through the soulful R&B lens of the incomparable Stax sound.

Of those seven songs, there’s not a single one worth skipping. Waiting For Little Milton opens with a heavy helping of the lauded Memphis Horns before Milton’s primal howl breaks through and transforms album opener “It’s Amazing” from a Stax standard into some wild amalgam of styles that owes as much to Chicago blues as the Memphis sound. Milton brings some serious riffing to followup “Who Can Handle Me Is You,” but the song’s bluesy swagger is tempered ever so slightly by some vintage work from the Memphis Horns and light orchestral flourishes from the Memphis Symphony Orchestra, both of whom ground Milton’s “Woman You Don’t Have To Be So Cold” firmly in the realm of soul … even when it all but demands to prowl off into proper blues territory.

Those three tracks prove pitch perfect lead-ins to Waiting For Little Milton‘s Side 1 closer, a jaw-dropping cover of Roy Hawkins’ and Rick Darnell’s blues standard “The Thrill Is Gone.” What can we say of that track, except Milton’s half-tempo interpretation – complete with a stunner of a guitar solo and orchestral arrangements that would make Serge Gainsbourg weep – feels as vital, as fresh, and as wholly original as it did when B.B. King made it famous just a few years prior.

Waiting For Little Milton is a brick house of a release from the one and only Stax Records. And it’s got all manner of sexy/soulful goodness going on inside, so that cover should pretty much explain itself.

Before you dig into that sleeve and discover Little Milton’s bluesy beauty, steal a moment to dig on the info peppering that tip-on sleeve. Take particular note of credits for the Memphis Horns and the Memphis Symphony Orchestra, ’cause their contributions make Waiting For Little Milton a legit work of art.

Now take another moment to digest the info on this little sticker too. Classic album you’re not likely to stumble across in your local record store – check. Fully remastered – check. 180g wax – check. Exclusive listening notes – check. This is what Vinyl Me, Please does, my friends.

You’ll probably want to have a gander at that oh so sexy Stax Records label on the bottom of that cover too. Not to mention the foil stamped VMP Classics tag on the back.

Now, the only drawback about Vinyl Me, Please’s Classics subscription is that you don’t get quite as many goodies inside (i.e. no original art print and no companion cocktail recipe). While those art prints are a lot of fun, I would offer that the album itself is the art, so those prints aren’t really the point. And as far as a cocktail goes, all you really need for Waiting For Little Milton is a bottle of scotch and maybe a couple of ice cubes.

Now, one of the more awesome things about VMP’s Classics picks is that they come with an EXCLUSIVE, VMP ONLY booklet/listening guide that breaks down why this album is so important, and also provides detailed stories behind every track therein. Which is obviously really freaking cool. 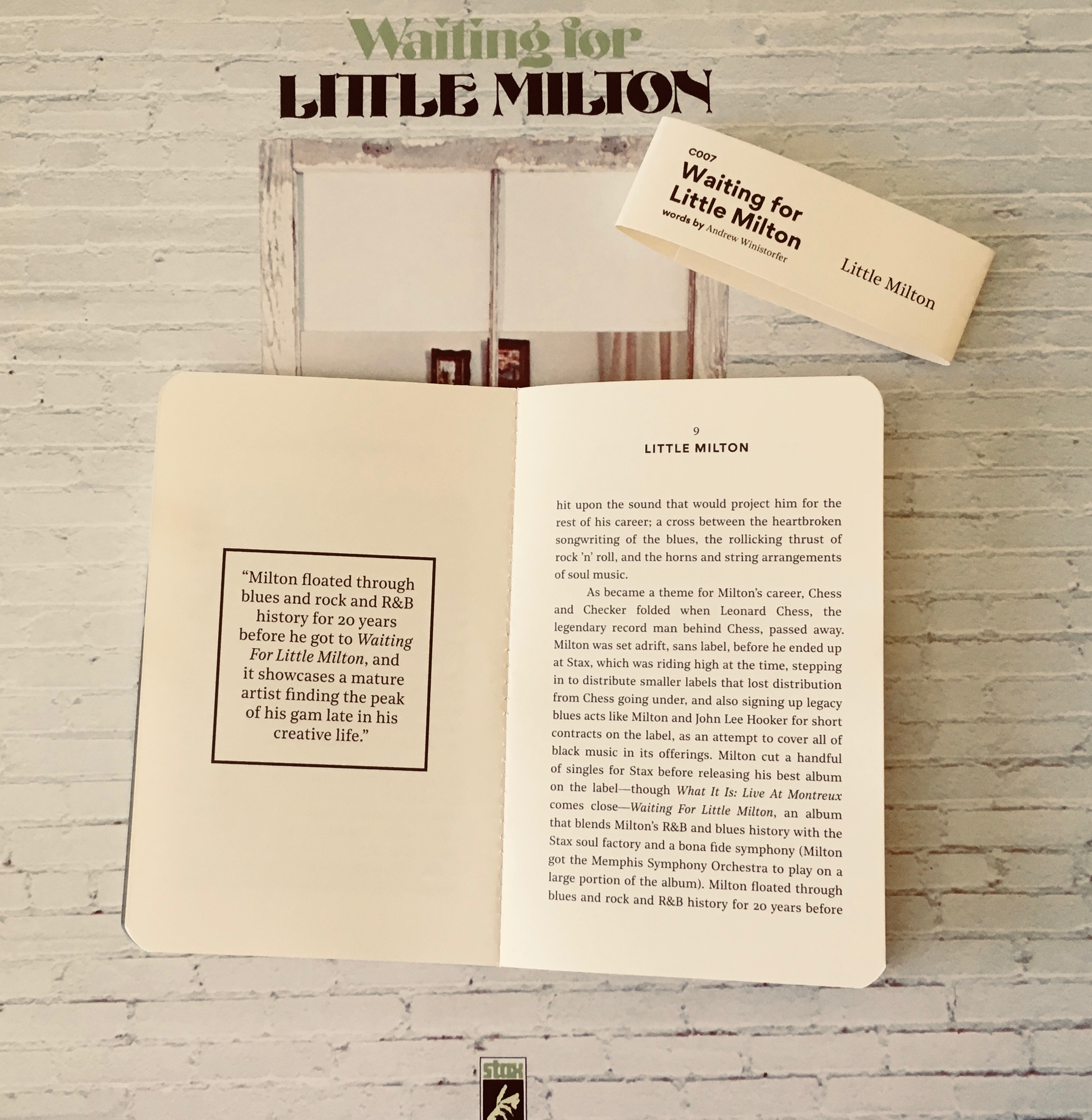 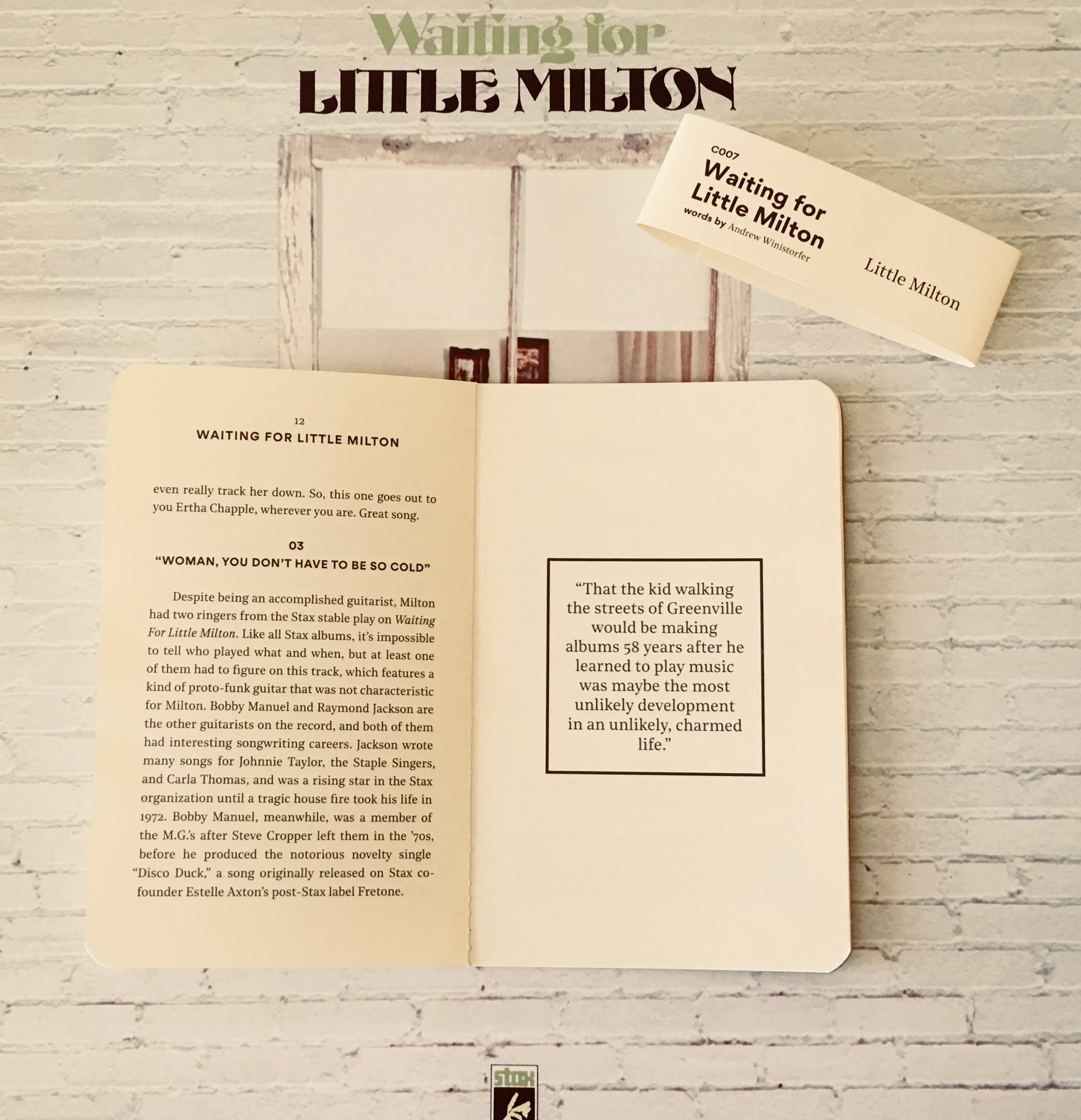 What about that vinyl, you ask? It’s 180g of seriously soulful wax … in true black.

And sometimes nothing looks (or sounds) better on your deck.

It’s safe to say at this point that one man’s Classic is another man’s Essential. Or vice versa if you prefer. While I may yet regret not grabbing Team VMP’s stunning reissue of For The Sake Of The Song, I certainly won’t regret owning the album I swapped it for. Little Milton’s Waiting For Little Milton has been a genuinely eye-opening discovery for me this month. One that the folks at Vinyl Me, Please may qualify as a Classic, but one that I hold as absolutely Essential. I’d like to thank Team Vinyl Me, Please for helping me discover this astonishing piece of Stax history, and for making every month another musical adventure.

A big THANK YOU to our friends at Vinyl Me, Please for sponsoring this subscription. Don’t forget to check out the official Vinyl Me, Please website and sign up to get some choice wax delivered right to your door each and every month! Can’t wait to see what crunchy treat they send our way in November!