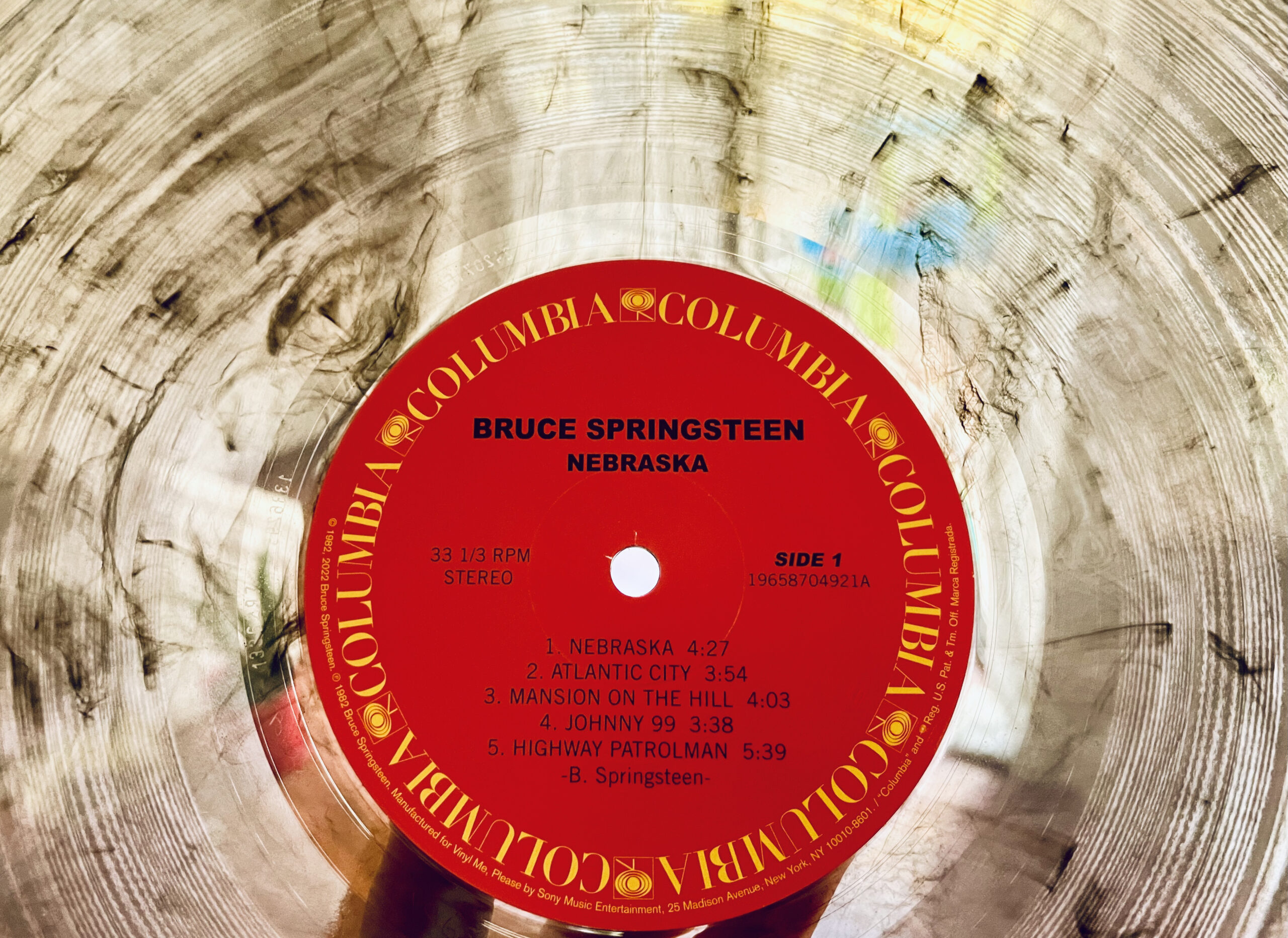 You’ll have membership privileges in the VMP store too, which means you can grab a copy of previous VMP selections from the archives – including their punchy reissue of Interpol’s early 2000’s classic Turn on the Bright Lights – or choose from a slate of super-limited releases pressed exclusively for Vinyl Me, Please. The store is open, and Team VMP are dropping fresh new selections to their stock every single week. Do not miss out.

What’s in October’s box, you ask? Only a killer reissue of the greatest album legendary rocker Bruce Springsteen has ever released. Check it out.

Whether you call him by his first name or his last, or just call him The Boss like like many in the music-loving masses do, there’s little doubt you know who all three monikers are referring to when you hear them. There’s even less doubt you’re more than casually familiar with the music of Bruce Springsteen because, well, he’s one of the biggest rock artists in the history of the form. Whether you love or loathe his gravely-voiced, everyman mentality, the man’s music has transcended genre, politics, and generations to reach untold millions of listeners over the years, and there’s little reason to suspect it won’t continue to do so.

That wasn’t always the case, of course, as nobody in the music biz starts on the top. Just like every artist that came before him, Bruce Springsteen indeed started on the bottom of the rock & roll food chain. The singer-songwriter’s ascension began in earnest in 1964, round about the time the young Springsteen caught The Beatles legendary performance on The Ed Sullivan Show. Inspired, the New Jersey native bought a cheap guitar, began writing songs about things he saw in his day-to-day life, and was soon gigging the Jersey circuit, building a reputation as a songwriter of singular vision.

Almost 10 years (and several bands) later, Springsteen got his shot at the big time when he was signed by Columbia Records… the same label that inked Bob Dylan in the 1960s. His debut Greetings From Asbury Park, NJ hit the market in 1973. It didn’t sell well, but was championed by rock critics. Ditto for its followup, 1973’s The Wild, The Innocent & the E Sreet Shuffle. It wasn’t until 1975’s Born to Run that Springsteen broke through. Hits and misses aside, he’s never really looked back.

From a commercial standpoint, Springsteen’s 1982 album Nebraska was far from a blockbuster. But in the eyes of many of the rocker’s most steadfast fans, it’s the Bruce Springsteen album. And if you’ve ever listened to it, that’s hard to argue. If nothing else, it’s surely the album with the coolest story.

That story is recounted in detail in Vinyl Me, Please’s Nebraska listening companion, so I’ll give you the Cliff’s Notes Version. As the tale goes, after a grueling few years of touring and recording, Springsteen retired to a cabin in the woods to start working on material for a new record, eventually recording the songs on 4-track recorder, and mixing them down with a boombox he had on hand.

Sparse, hauntingly introspective, and almost literary in scope, Springsteen initially took his folky demos into the studio to work out rock versions of the songs with his regular backers, The E-Street Band. Those sessions proved less than fruitful with pretty much everyone involved agreeing the raw nature of the folky numbers Springsteen had cut in his spare bedroom was just too good to jazz up with proper rock & roll vibes.

Interestingly enough, the sonics he’d captured on his 4-track simply could not be re-created in the studio. And in a, “I really cannot believe they did that” sort of move, Columbia ultimately decided to clean up those demos as best they could, and release them almost untouched.

In the end, Nebraska – with its heart-rending tales of haunted highways, desperate crimes, and outsiders pushed to the brink by circumstance and society – was arguably just the sort folk-forward album some of Springsteen’s earliest fans had been expecting him to release since he first started recording. And in truth, it doesn’t sound like anything Springsteen released either before, or after.

Frankly, at the time pf its release nothing sounded like Nebraska. And few folk-rock records recorded in its wake have managed to duplicate the album’s stark emotional impact. This is intellectual mood-music of the first order. And even if the songs therein occasionally hit the blue-collar blues a little too on the nose, their delivery so completely subvert rock & roll expectations, they still pack a hell of a wallop. If you don’t believe me, pick up this newly-remastered pressing from Vinyl Me, Please and find out.

Nebraska is music culled from, and made for the wide open road. So its only fitting we’re looking over the dashboard here. And I must say VMP really outdid themselves with the packaging this month too as the matte-finish gatefold is a true sight to be hold.

And I fully dig this month’s VMP Essentials foil stamp coming in that shiny, shiny red.

That Essential status is more than covered by the info on the album’s hype sticker if there’s any doubters out there.

There’s another important sticker in the box as well, of course. And this VMP subscriber contest winner from Kagoshima Records is a real hoot. I mean, who doesn’t love a Sloth, right?

Just FYI – there’s some more information about this pressing of Nebraska on the OBI-strip. And there’s a brief outtake from the listening companion on there as well.

As for that listening companion, Bruce Springsteen biographer Peter Ames Carlin has delivered a really page-turner covering the recording, and legacy of Bruce Springsteen’s Nebraska. Here’s a little taste.

As with every Essentials release, Nebraska comes with an original, album-inspired art print. And this ponderous little number from Justin H. McHugh could not be more on point.

though it really pops when you hold it up to the light.

Unfortunately, that smoke effect is barely visible on my deck. Thankfully the music more than makes up for it.

How’s it sound? Like catching an all-night radio station on a long, lonely freeway en route to a destination as yet undecided. The music is both beast and balm, and you know you’ll forever lose your way if you change the channel.

Way back in my salad days, a friend dropped “Atlantic City” onto a mix tape for me. I’d admittedly never heard the song before and written off much of Bruce Springsteen’s body of work as overproduced, americana-tinged pop rock. As it was, the song was a legitimate revelation, and remains one of my all-time favors rock numbers to this day. And yes, I immediately went out and picked up a copy of Nebraska after hearing it.

I paid a whopping $3 for my vinyl copy of the album, and have had the record in one format or another ever since. My old $3 copy has been more than a little beat for years now, however, and has provided a less than optimal listening experience of late. I’m betting a few of you have had the same problem. If that’s the case, take heart in knowing Vinyl Me, Please really did knock this pressing right out of the park. And I could not be happier to finally have a top-notch vinyl copy of this one in my collection. Needless to say, it’s already gotten a handful of spins, and has many more on the horizon. Thanks VMP for making it happen.