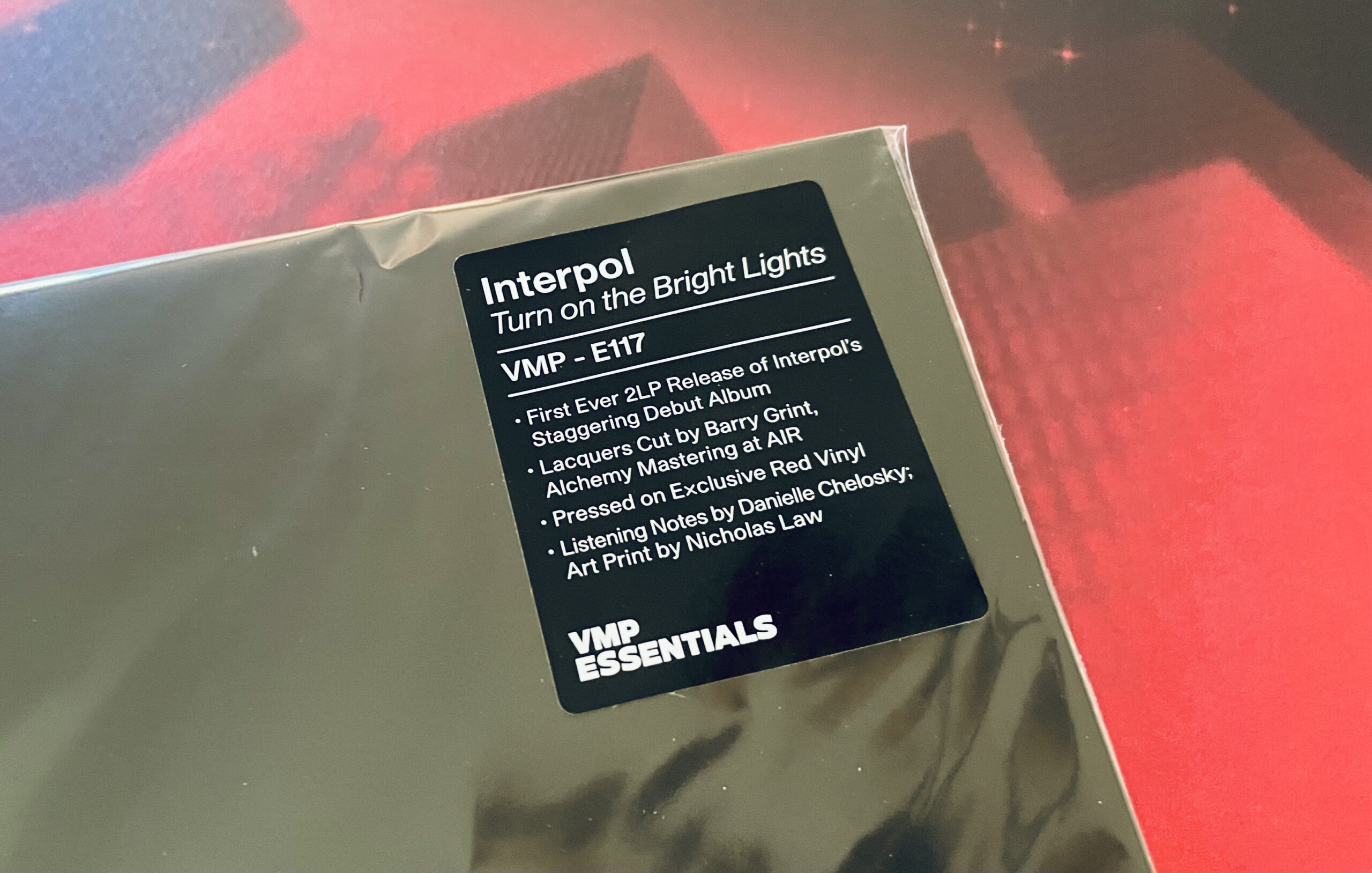 You’ll have membership privileges in the VMP store too, which means you can grab a copy of previous VMP selections from the archives – including their flawless reissue of John Coltrane’s late-in-the-game marvel Sun Ship – or choose from a slate of super-limited releases pressed exclusively for Vinyl Me, Please. The store is open, and Team VMP are dropping fresh new selections to their stock every single week. Do not miss out.

As for what VMP packed into September’s box, I’d simply ask who among you is ready to Turn on the Bright Lights?

The early 2000s were a particularly fruitful time for the indie rock scene with the post-punk/garage-rock revival birthing a killer new band almost on a weekly basis. Many of the bigger acts of the day, of course, came up on the New York scene. As big a part as many of those bands were in my life (and countless others), I’ll spare you the history lesson here… mostly because Vinyl Me, Please has been pressing fancy-pants reissues of works from the New York scene’s best bands for years, and I’ve already written extensively about it (see: TV on the Radio, The National, The Strokes, Grizzly Bear, and others).

That being the case, it always seemed more a matter of “when,” not “if” they’d get around to pressing an Interpol album. The day has finally come. And I’m happy to report their reissue of the band’s landmark debut Turn on the Bright Lights is more than worth the wait.

As it happens, this is an album that meant a lot to me when it was released, and I’ve tinkered with picking of a vinyl pressing for years now. I’m happy to report the album has never sounded as good, though you’re excitement over that prospect depends entirely on how you feel about Interpol as a band. And as much as I love turn on the Bright Lights, I get why some folks don’t dig it. After all, Interpol weren’t exactly breaking new ground with their sound here. And even I’d have to admit all the Joy Division comparisons that have dogged the band pretty much since their inception aren’t entirely unfounded.

Similarities aside, Interpol’s debut cuts in distinctly different ways as Joy Division’s punchy, yet inherently maudlin works, with frontman Paul Banks and company churning out 11 songs of cranky, fuzzed-out post-punk bliss owing as much to the shoegaze era as it do the crunchy, late-60s mods and the ’80s new wave scene. Even still, it’s hard to hear Banks belt out a tune in his signature disaffected monotone without thinking of Ian Curtis. Ditto for Carlos D’s immaculate, but undoubtedly Peter Hook-ish bass lines.

In the end, the band has always seemed to wear those comparisons like a badge of honor. And much like the best of Joy Division’s works, Turn on the Bright Lights is an album that feels like watching a movie. One full of stunning imagery, stylish narrative flourishes, dramatic tonal shifts, vividly drawn characters, and sometimes overpowering tinges of raw-nerve emotion. And one viewed through the foggy haze of New York’s post-9/11 landscape. More than many of the albums released by their contemporaries, Interpol’s sprawling debut still hits as hard today as it did twenty years ago. And VMP is now giving fans a chance to hear it in ways they likely never have before.

As Turn on the Bright Light is very much a cinematic sort of experience. So it’s only fitting that the cover boasts a lit movie screen.

Just FYI – that cover fronts a glorious, tip-on gatefold with pics and credits inside.

The black and white back cover is a site to see in its own right as well.

It also happens to boast that shiny VMP Essentials foil stamp that ensures this pressing of Turn on the Bright Lights will ever be known as a vital addition to any record collection.

And to all the doubters out there, the hype sticker more than backs that status up.

If you’re like me and have taken to collecting the snazzy stickers from winners of Vinyl Me, Please’s monthly contest, the latest from VMP subscriber Erin Hanson is sure to be an instant fave.

Before you get to digging for vinyl treasure, you should take a quick moment to check out the info on the OBI-strip, as well as the excerpt from the listening notes that adorns the back.

And in case there’s any question, those listening notes are required reading for any Interpol fan.

And this album-inspired, art deco-ey beauty of an art print from Nicholas Law is sure to become a legit all-timer for the Vinyl Me, Please Essentials vaults.

Make no mistake, the vinyl tucked away inside is a work of art in and of itself.

For the first time ever for Turn on the Bright Lights, there’s two of those beauties in there.

And they’re gonna bring some serious post-punk punch to your deck… though the red doesn’t exactly pop on mine.

How’s it sound? Like driving through the city at 4am alone, in the dead of winter, and in a car with no heat. But, ya know, with that warm vinyl sound.

Look, I was a big, big fan of Interpol long before Turn on the Bright Lights was tabbed as the September Essentials pick. And I’ll freely admit to being wholly obsessed with this album when it was released. And I’ve been intermittently obsessed ever since. So much so that, when the album was announced by Vinyl Me, Please, I was genuinely puzzled as to why I hadn’t picked up a copy on vinyl at some point in time.

I’m glad I didn’t, because I really cannot imagine a pressing sound any better than this one. Please understand I do not make that claim lightly. And I truly cannot thank the folks at Vinyl Me, Please for not just putting the spotlight back on Turn on the Bright Lights for its 20th anniversary, but for doing so in such high fashion.