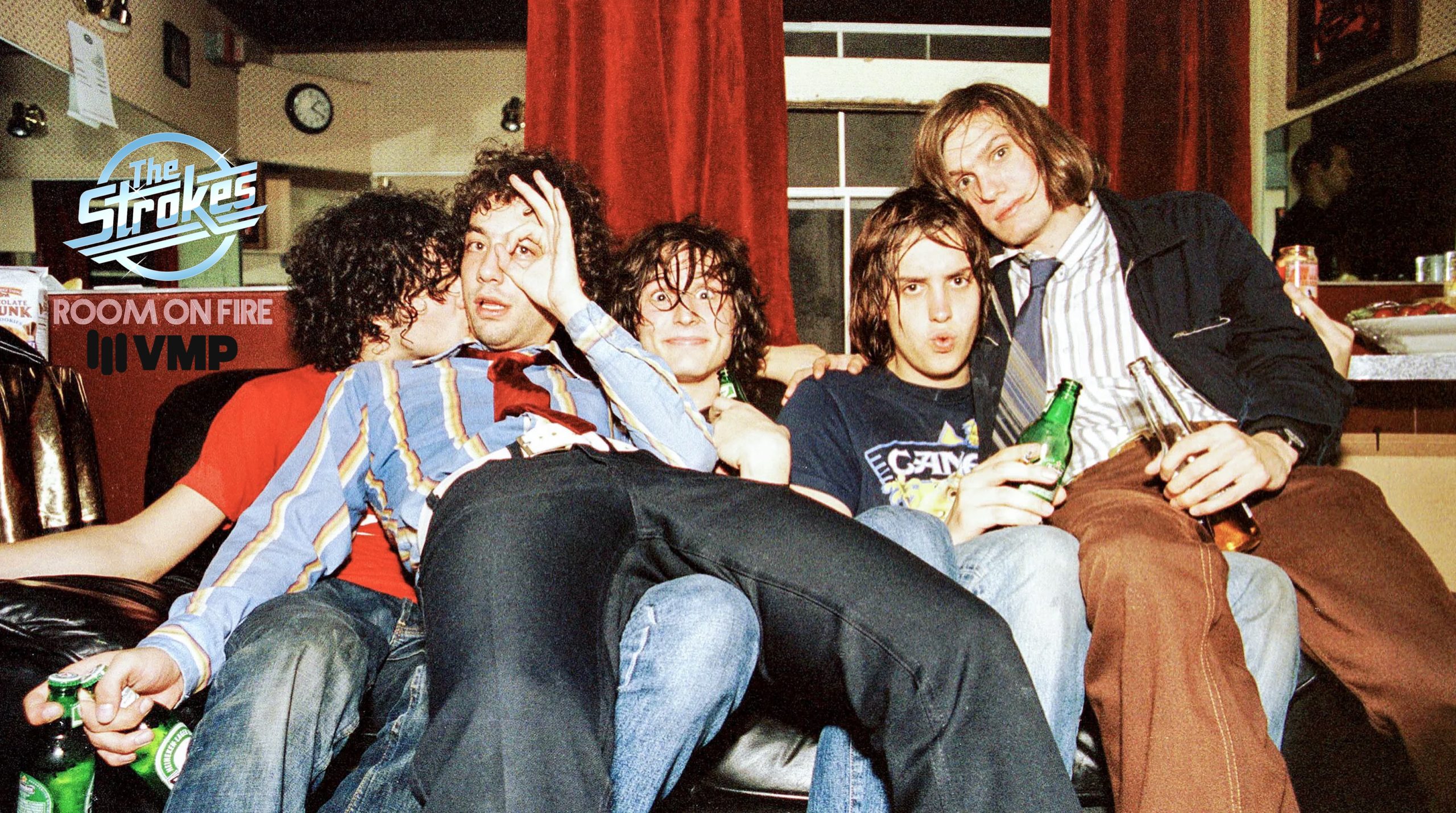 Here’s how it works. You send Vinyl Me, Please some of your hard-earned money (a 3-month membership will set you back about $119) and they send you one carefully selected album they feel is Essential to any record collection. Yes, it really is as easy as it sounds. You even get FREE SHIPPING. Each custom pressing (often on colored wax!) also comes with killer extras like original artwork, informative booklets, or even a recipe for a companion cocktail.

You’ll have membership privileges in the VMP store too, which means you can grab a copy of previous VMP selections from the archives – including their marvelous re-issue of John Prine’s self-titled and fully folkified debut – not to mention a slate of super-limited releases pressed exclusively for Vinyl Me, Please. The store is open, and Team VMP are dropping fresh new selections to their stock every single week. Do not miss out.

Word to the wise, while the store is open to the public, most of the more covet-worthy stock is only available to subscribers. Members are privy to reduced “Members Pricing” as well, so joining the club definitely has its rewards. If you’re peckish about relinquishing control of your record collection to complete strangers, know that VMP’s Swaps Program is in full effect. That means you can flip any VMP pick you’re not interested in for a past AOM selection that’s a little more your speed (including picks from the Classics and Rap/Hip Hop tracks). My advice? Don’t overthink it. Do yourself a favor and sign up today.

What’s on deck for February? Hope you brought your skinny jeans, a seriously disaffected attitude, and an unquenchable thirst for PBR, ’cause we’re about to spin a garage rock revival classic with The Strokes’ sophomore release Room on Fire.

For The Love Of Music, Please DO NOT BEND (or how I learned to stop worrying and dance into the Room on Fire)

Anyone who came of age in the 1990s can tell you the decade was a decidedly mixed bag in regards to the music scene. Some might even claim it was a legitimate tale of two decades type scenario with guitar-driven alternative rock dominating the airwaves early, but giving way to the sugary sweet sounds of bubblegum pop later on. As it was, there really wasn’t much for rock fans unwilling to do some serious legwork on the indie circuit to get overly excited about as Y2K arrived.

The rock scene needed a serious shot in the arm at the dawn of the new millennium. And as luck would have it, that shot came fast and furious in the early aughts, thanks largely to a handful of bands who took the rock sound on a down and dirty trip back to the garage. Many were dubbed the “The” bands for obvious reason (see The Vines, The White Stripes, The Hives, and so on and so forth), and their subsequent releases spearheaded what was quickly dubbed “the garage rock revival.”

New York City became the epicenter of that scene. And scenester extraordinaires The Strokes became the poster-children for the new age of old school rock after the release of their debut album, the all-attitude slacker rock classic Is This It. Released in 2001, Is This It was a legitimate smash hit that catapulted The Strokes and many of their revival brethren to the forefront of the musical zeitgeist, with nearly half the album’s songs earning heavy radio play. And for their part, The Strokes seemed happy enough to ride the wave of notoriety until it came crashing down.

That ride lasted longer than anyone could’ve anticipated, however, and when it came time for Julian Casablancas and the boys to record their followup, serious expectations followed them into the studio. The Strokes responded in kind by doling out another dose of gutter-born, cooler-than-the-world rock and roll on par with their debut, cementing their legacy as the most unflappable of torch-bearers for garage rock’s modern era.

Of course, even die-hard fans of the band would admit their sound didn’t exactly re-invent the art form, with The Strokes continuing to take obvious cues from the likes of Television, The Heartbreakers, Joy Division, and a million other groups of the punk/new wave/post-punk era. Likewise, 2003’s Room on Fire found The Strokes essentially taking copy and paste approach to song-craft for a followup album that found them more or less circling the block on the sonic journey they began with Is This It.

That’s not a bad thing for the record. If anything, The Strokes managed to avoid the “sophomore slump” most bands fall prey to purely because they didn’t try to re-invent their sound, or even push it forward in any real capacity. And yes, that strategy more than pays off as Room on Fire is every bit as rollicking a good time as the album which preceded it. Some might even argue it’s even more of a good time as it found the gang turning the sonic screws ever so slightly to deliver tighter arrangements, slicker guitar parts, perfectly layered synth flourishes, and disaffectedly honeyed vocals as slyly of the New York moment as they were infectiously sing-able.

And sing-along fans did when Room on Fire was released, with The Strokes riding an unexpected second wave of success in its wake. Of the songs within, Room on Fire is another rousing trip through rock and roll past and present, with standouts like “Reptilia,” “12:51,” and “Meet Me in the Bathroom” taking their unabashed New York-by-night vibes to new levels of underground infamy. And for my money, I’ll offer that “What Ever Happened?” may be one of the all-time great album openers from any era, not to mention the best song The Strokes ever recorded. Check it out if you don’t believe me. And if you can do so via this immaculate VMP pressing, all the better.

This is where I’d usually burn a few words waxing poetic on the importance of album covers and what they mean. But even as I’m certain every image spotting the cover of Room on Fire has meaning, I haven’t a clue what they do, so I’ll just call it a lovely bit if collage work and be on my way.

Though I will point out the shiny, foiled gold flourishes the Vinyl Me, Please team snuck into the design of this pressing … which is supremely cool even if it doesn’t entirely come across in the photo.

The flip side artwork is no less compelling, by the way, with a full track list included and even a shiny gold foil-stamp forever proclaiming Room on Fire an official VMP Essentials selection.

Before we get too far along, we should also take a moment to appreciate this month’s Vinyl Me, Please sticker selection – itself a silvered, heart-shaped beauty designed by VMP member Charlo G. Walterbach.

With that out of the way, we should also take moment to study the OBI-strip cradling the spine of Room on Fire, ’cause the a trove of info there as well … like the album title, band name, and catalogue number of the release. Yes, Team Vinyl Me, Please is getting very close to release number 100, and I cannot wait to see what vinyl treasure they drop for that momentous occasion.

Turn it over for a few refined words about why VMP selected Room on Fire as an Essentials picks, not that it should need much explanation.

And on the inner flap, you’ll find the recipe for Room on Fire‘s companion “cocktail,” which is an appropriately stripped back affair this month. And no, the “Automatic Stop” really ain’t hard.

As with every Vinyl Me, Please Essentials pick, Room on Fire comes with an album-inspired art print as well. This month features a suitably form is function beauty from author/graphic designer Cynthia Alfonso.

Don’t worry, I’ll get to unveiling that wax soon enough. But before I do, we should have a quick look at the album’s inner sleeve, fit with killer photos of the boys in the band, and a full list of lyrics from Room on Fire, which is a boozy sing-a-long record if ever there was one.

As for the disc inside, it’s a beauty of the “holy fuck that’s awesom”e sort that the Vinyl Me, Please gang is appropriately calling “Meet Me In The Bathroom Tile” colored.

How’s it sound? Like standing in line to use the filthiest bathroom in the filthiest club of the filthiest city on Earth, and realizing that none of that matters ’cause the band you’re hearing from the stage is literally lighting the room on fire with sound.

Give VMP A Spin

Look, I get it, The Strokes are not everybody’s cup of tea. And I’d wager there are even quite a few haters out there wondering why anyone would be hot for a re-issue of Room on Fire … even one as lovingly realized. I mean hell, it’s arguably not even the best album in The Strokes’ discography. But for a certain group of kiddos out there who came of age in the early 2000s, Room on Fire is the very definition of a landmark album. And given the state of rock music before The Strokes and their so-called “rock revival’ brethren , it may well have been that set’s first legitimate taste of rock and roll as both and art form and a lifestyle.

Even if you weren’t among that particular set of fans, Room on Fire is still a marvelously executed rock record full of crunchy riffs, dancey grooves, and more swagger than Mick Jagger could shake a stick (or cane, if you will) at. And yes, it’s more than worthy of the lavish, Essentials treatment from the gang at Vinyl Me, Please. Thanks for making this little beauty happen, folks!

A big THANK YOU to our friends at Vinyl Me, Please for sponsoring this subscription. Don’t forget to check out the Vinyl Me, Please website and sign up to get some choice wax delivered right to your door each and every month! Be sure to check back next month when I’ll be unboxing a cosmic hip hop classic in Kid Cudi’s Man on the Moon: The End of the Day!