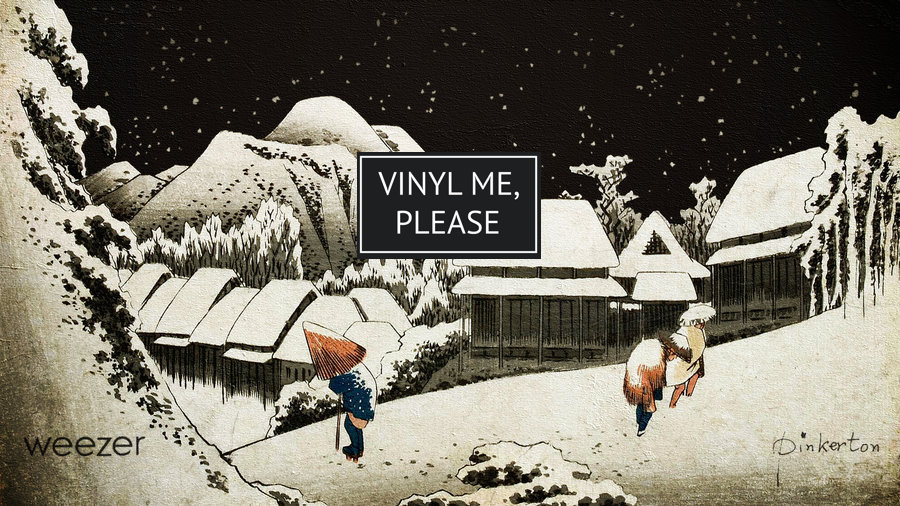 Good things come in 12 inch packages. Delivering limited edition pressings of new and classic albums directly to your doorstep, Vinyl Me, Please operates under a simple philosophy: The Album Lives. With a carefully curated catalog and lovingly assembled album art, the subscription service is more than just a record club … it’s a lifestyle choice for folks who wish Record Store Day could happen every month. And in their living room.

Here’s how it works. You supply Vinyl Me, Please with $23 a month and they supply you with one meticulously selected album worthy of your time and attention. Stupid easy, right? Each custom pressing (often in color!) also includes tons of special features like original artwork and even a companion cocktail recipe. There’s also the chance to get some free vinyl swag that the VMP team dishes out with alarming regularity. Best of all, you get access to the  VMP members-only store. The June store is now open, giving you the chance to grab a copy of previous VMP selections from the archives – including April’s lavish release of The Score by Fugees – plus additional rare or exclusive releases. June treasures include raw-nerve songstress Marissa Nadler’s new album Strangers (nice to see VMP working with Sacred Bones Records!), Classixx’s latest disco-ducking collection, Faraway Reach (VMP Exclusive limited to 750 copies pressed on white vinyl), a new Late Night Tales release curated by neoclassical composer extraordinaire Ólafur Arnalds, and William Tyler’s lush new recording, Modern Country. There’s a shiny four LP release of My Morning Jacket’s breakthrough album It Still Moves in there too. And if you’re interested, the VMP team is also taking preorders for Radiohead’s A Moon Shaped Pool – which you should own if your heart is still pumping blood.

If for some reason you’re still on the fence about signing up, just know that VMP’s Swaps Program is now in full effect and you can read all about it right here. Yep, the Vinyl Me, Please team have thought of pretty much everything. Do yourself a favor and sign up today. But first, let’s have a look at what’s inside this month’s box. 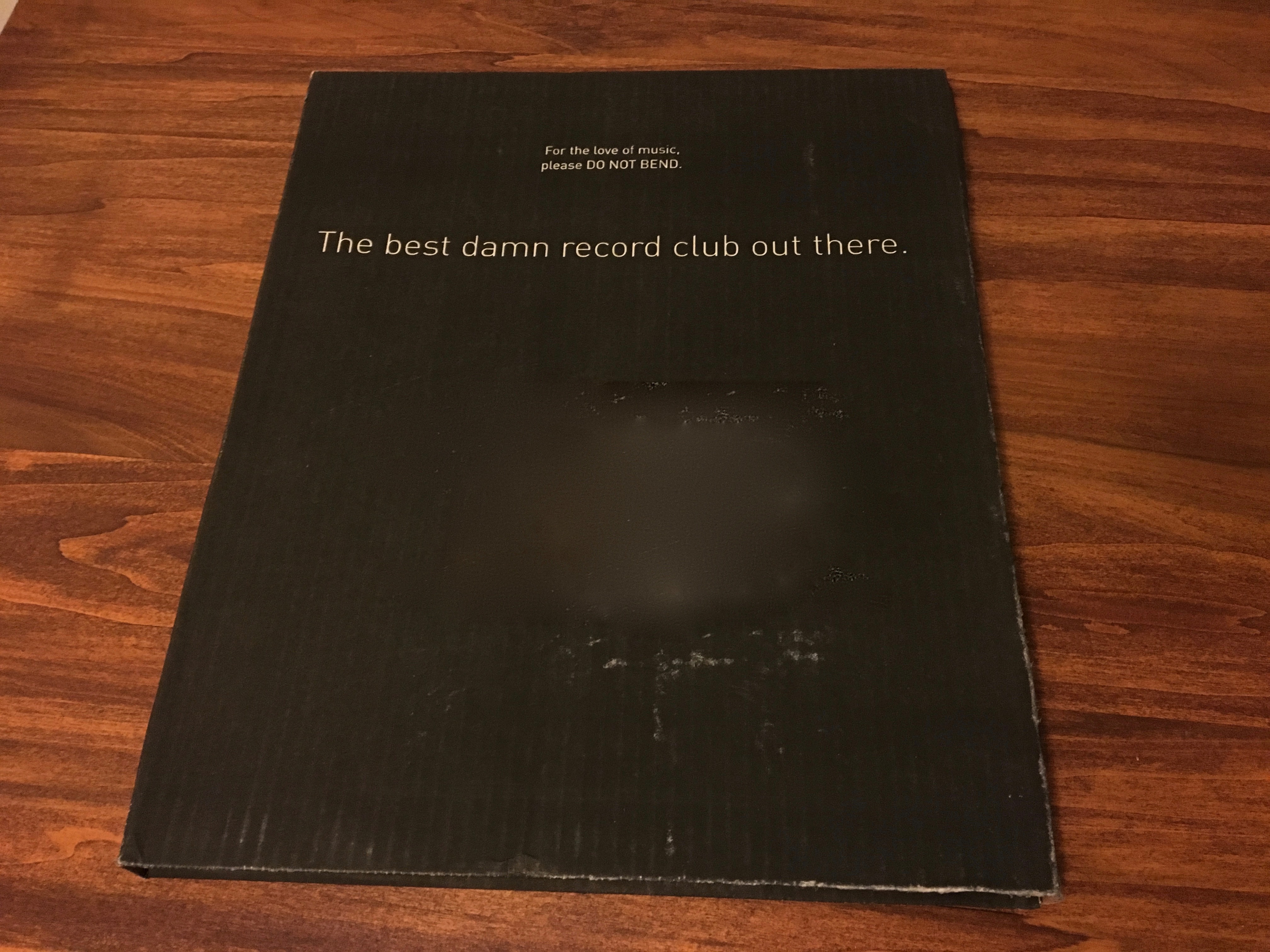 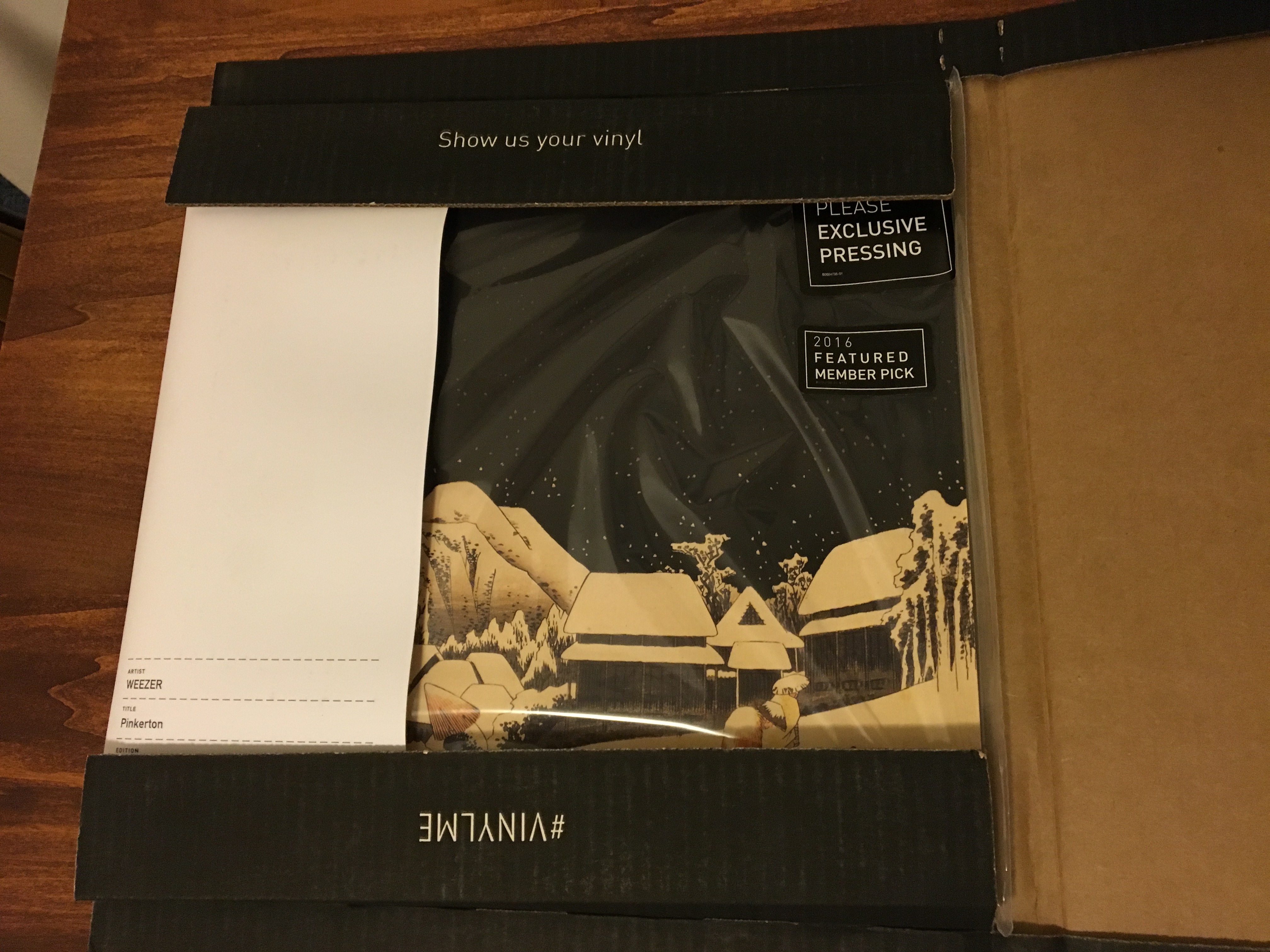 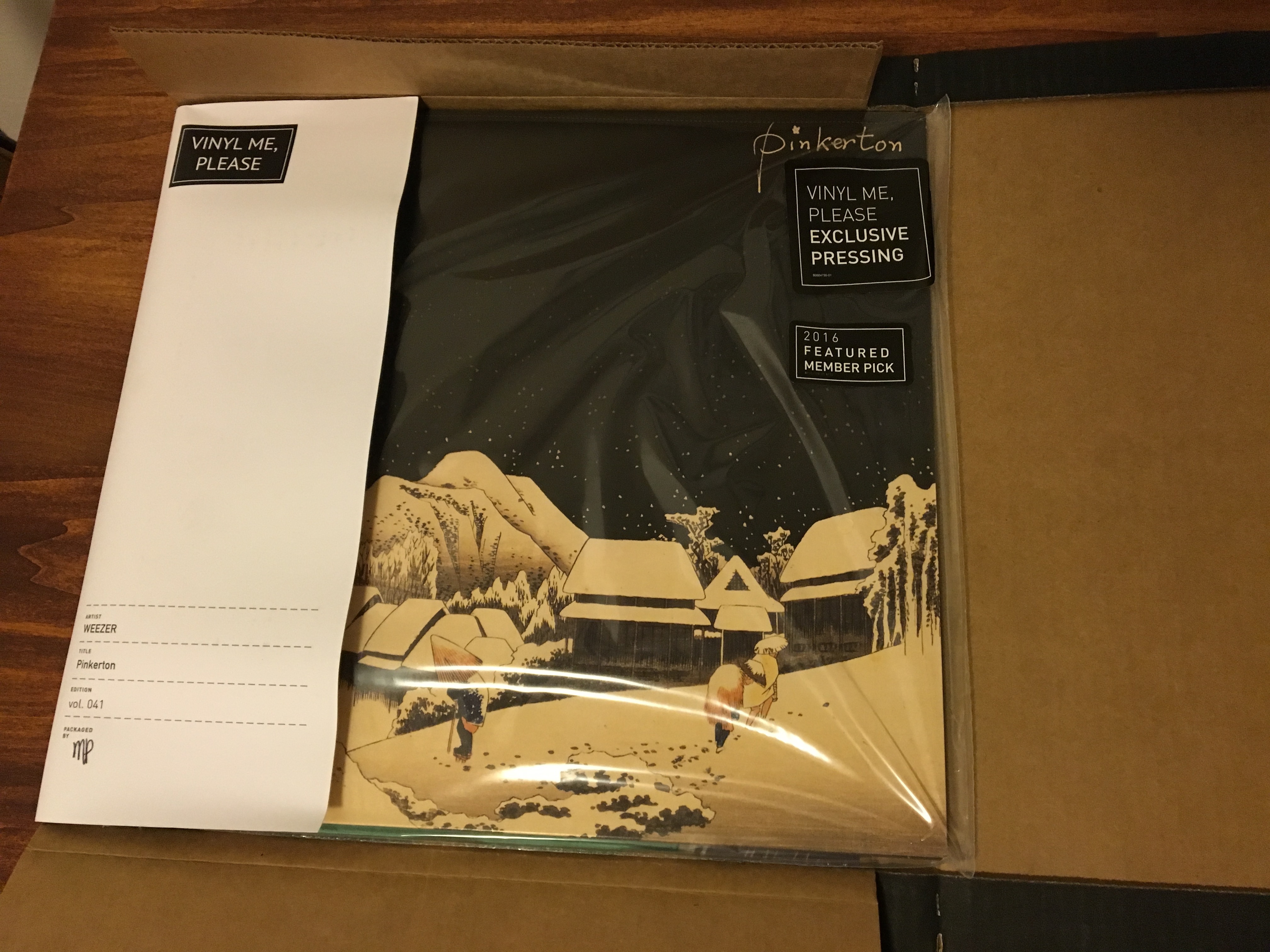 After the breakout success of Weezer’s self-titled debut, the world was their oyster. For frontman Rivers Cuomo, that was a big problem. Grappling with a crippling shyness, overnight success, sexual frustration, relationship dysfunction, and his own sense of grandiosity, Cuomo found himself in the middle of a full-on identity crisis. He also found himself rife with new material. Pulling songs from the dark corners of his own fractured interior, Cuomo crafted the core of what would become Weezer’s second album. Cuomo has described the songs on Pinkerton as, “A clash of East and West. My hindu, zen, kyokushin, self-denial, self-abnegation, no-emotion, cool-faced side versus my Italian-American heavy metal side.” If that sounds a bit heavy for the follow-up to an album of catchy, irreverent post pop rock anthems, well, it is. Yes, Pinkerton is darker and more abrasive than its predecessor. Still, the ten songs that make up the album never dwell too long in the shadows. Over Pinkerton‘s 35 minutes, Cuomo & Co croon, shred, weep, and wail about everything from fan crushes to impossible lovers to physical and emotional abuse. Somehow they do so without losing sight of the sun-n-fun pop aesthetic that put them on the map. The result is a stodgy, emotionally raw collection of introverted, fist-pumping power pop that pointed to an artist taking a giant leap forward even as he alienated many of the hook hungry fans that put him on top.

Misunderstood and lacking anything resembling a hit single, Pinkerton was released in the fall of 1996 to mixed reviews and underwhelming sales. Embarrassed by the album’s failure, Cuomo publicly questioned the confessional nature of the work equating it to, “getting really drunk at a party and spilling your guts in front of every one and feeling great, then waking up the next day and realizing what a complete fool you made of yourself.” Of course, fools often rush to judgement. And even Pinkerton‘s harshest critics couldn’t ignore the draw of the album’s raw emotional landscape. While die-hard fans continued to listen, the world began to take notice. In spite of its initial failure, the album took on a life of its own. After years of claiming ‘cult classic’ status, that status finally gave way to a bonafide hit. In 2001, Rolling Stone readers voted Pinkerton the 16th greatest album ever recorded. By 2009, the album had quietly sold over 850,000 copies and been certified gold. Love it or hate it, Pinkerton changed the game. Twenty years after its release, it’s still one of the most brutally honest rock records ever recorded. And it’s an absolute joy to experience every trembling vocal and fist-pumping riff all over again.

Pinkerton was a stark change of pace from the introspective pop pleasures of the Weezer’s debut album. It makes sense that Cuomo & Co would shed the bare simplicity of that album’s cover for something a little more dramatic. The ukiyo-e print that introduced the world to Pinkerton is at once fragile, virile, sensual, and sorrowful. Just like the music inside. 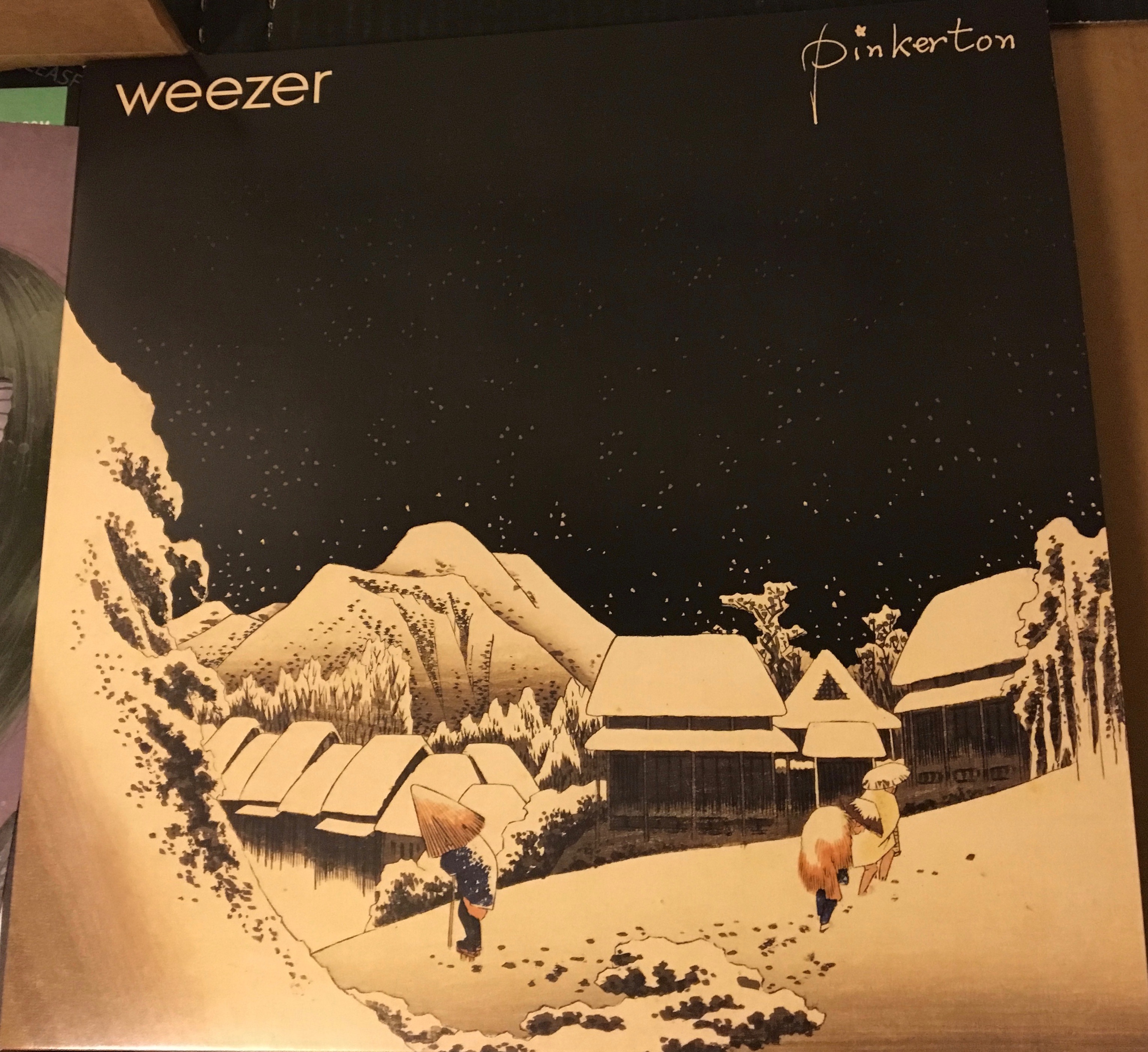 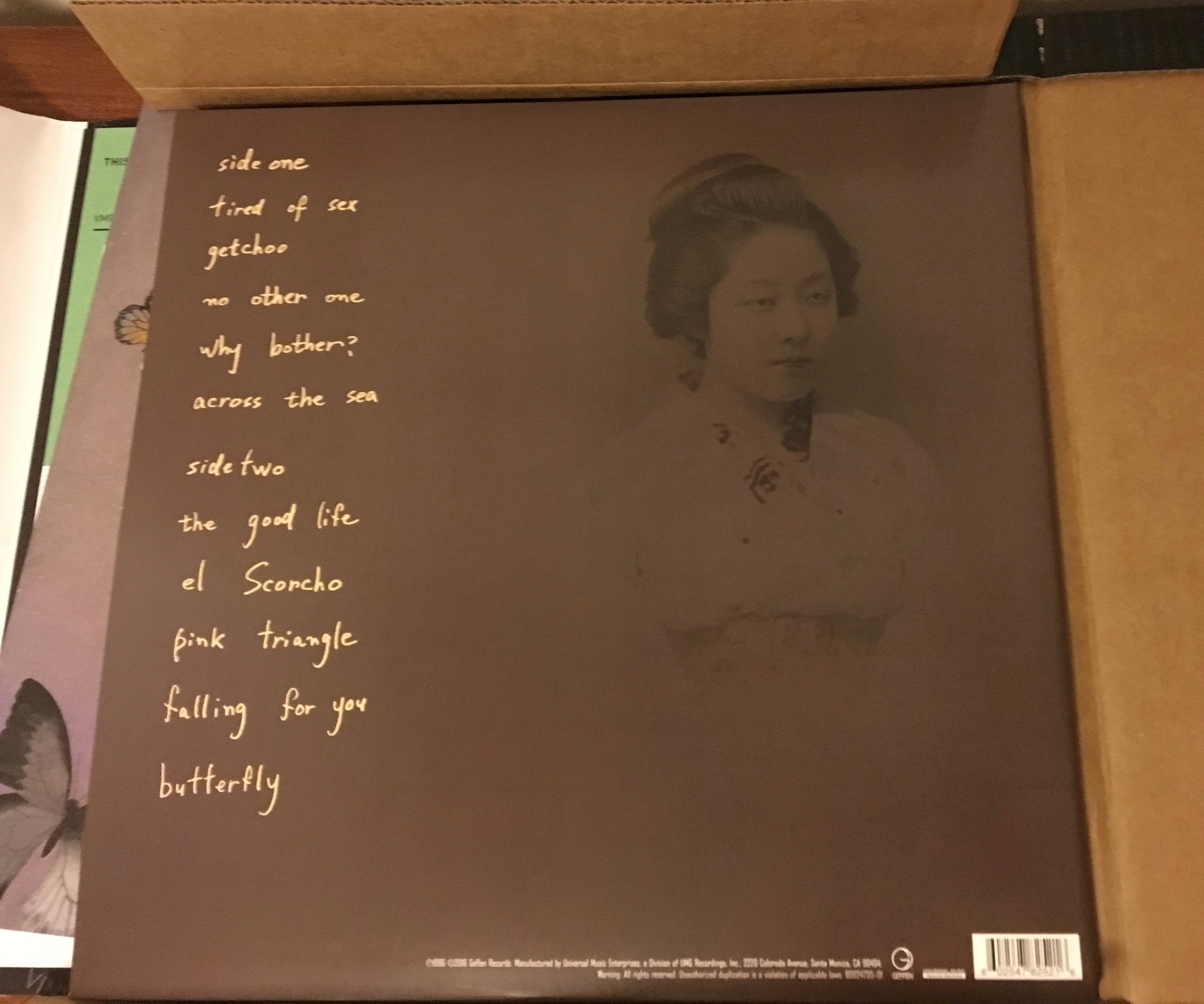 As always, the album comes wrapped in a mini-sleeve chock full of important information like the artist’s name, the album’s title, month of issue … and even the initials of the person who personally handled your disc. Good looking out, MP. 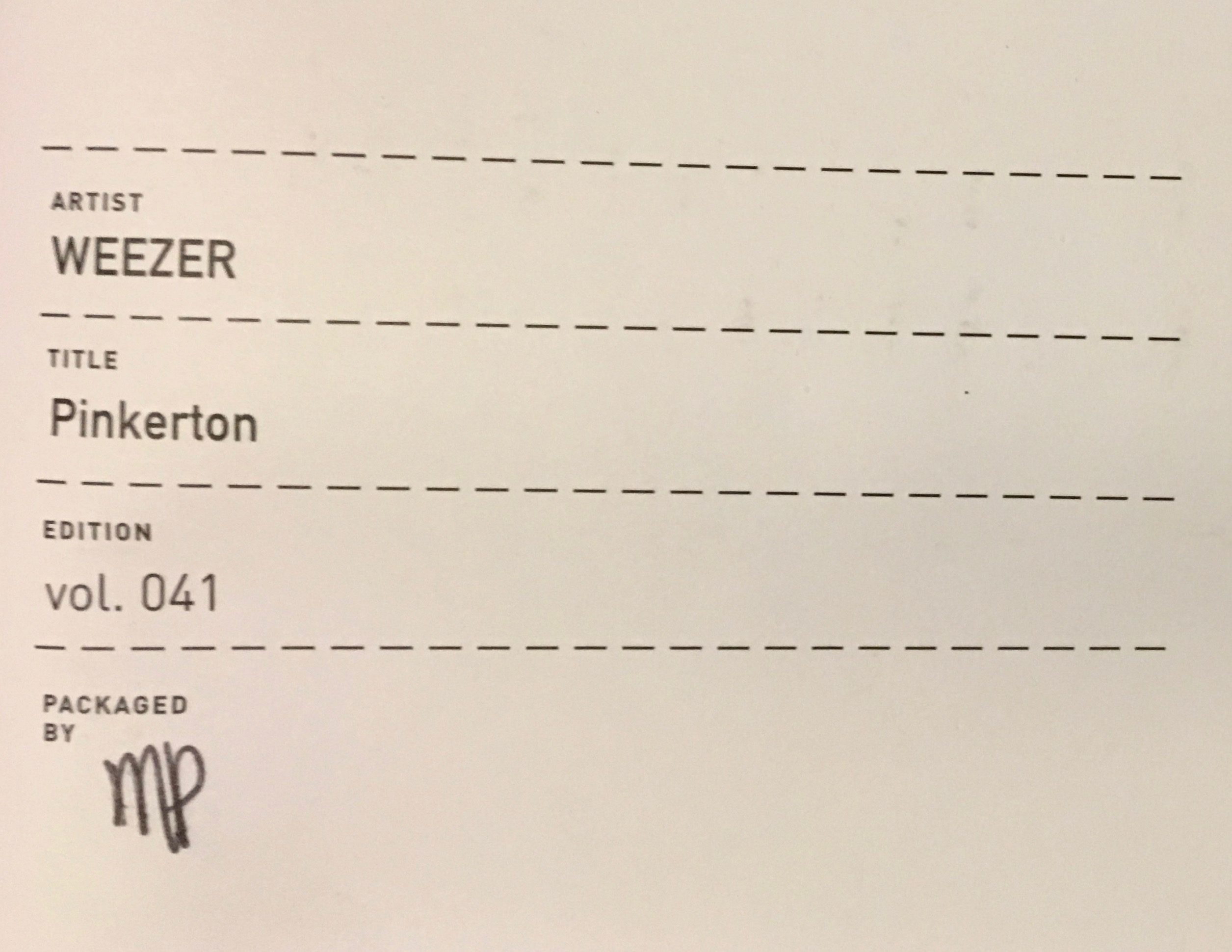 Don’t forget to flip that sleeve over and scope out Pinkerton‘s companion cocktail, The Sake Martini. It’s got sake in it. And sake is delicious. So make sure you have one. Or two.

Digging deeper, you’ll find two hidden gems – a lovely bit of poetic rambling from VMP’s own Tyler Barstow and a stunning 12″x 12″ print from Fuco Ueda. I’ll let the art speak for itself this month, ’cause damn. 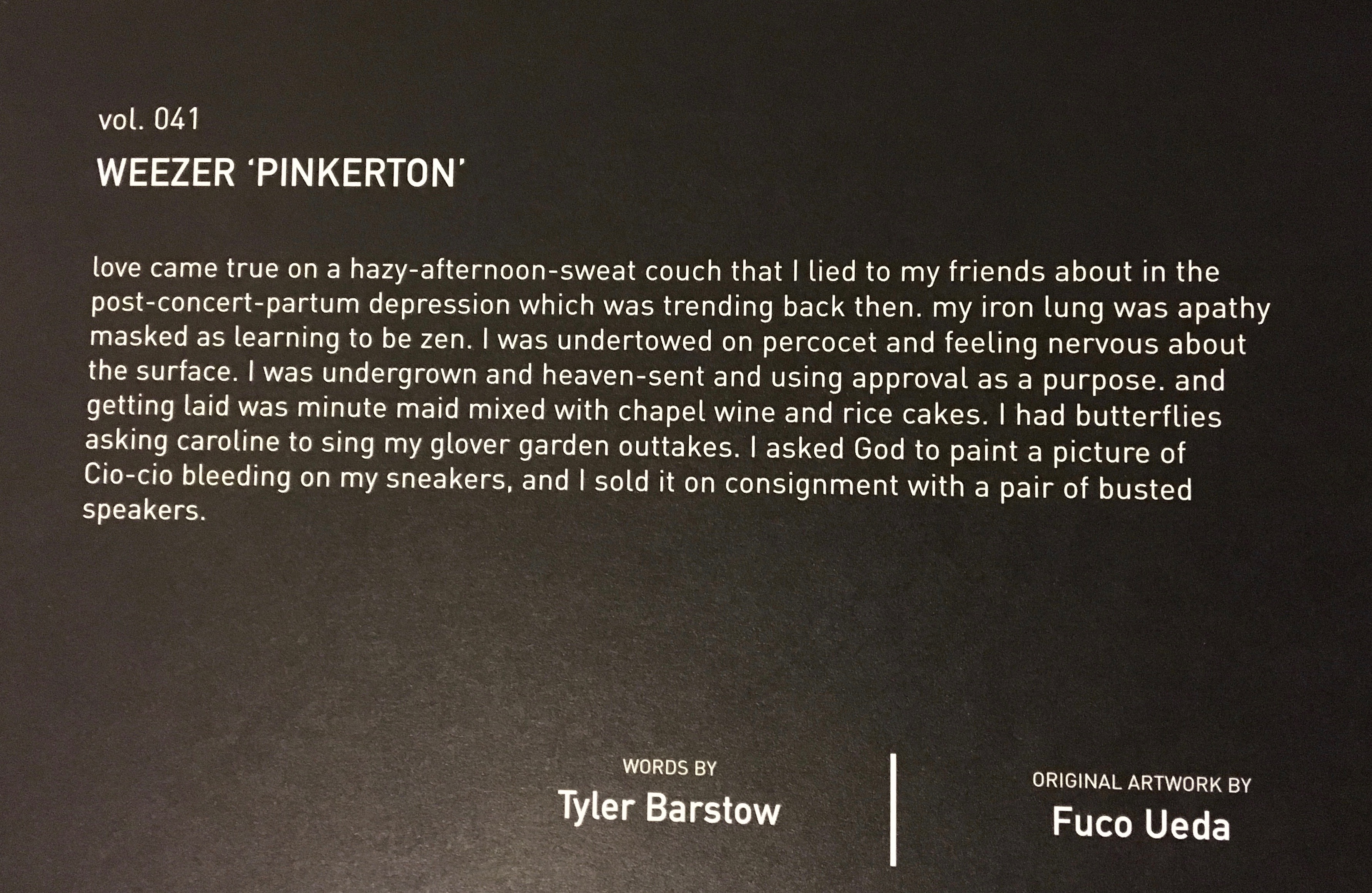 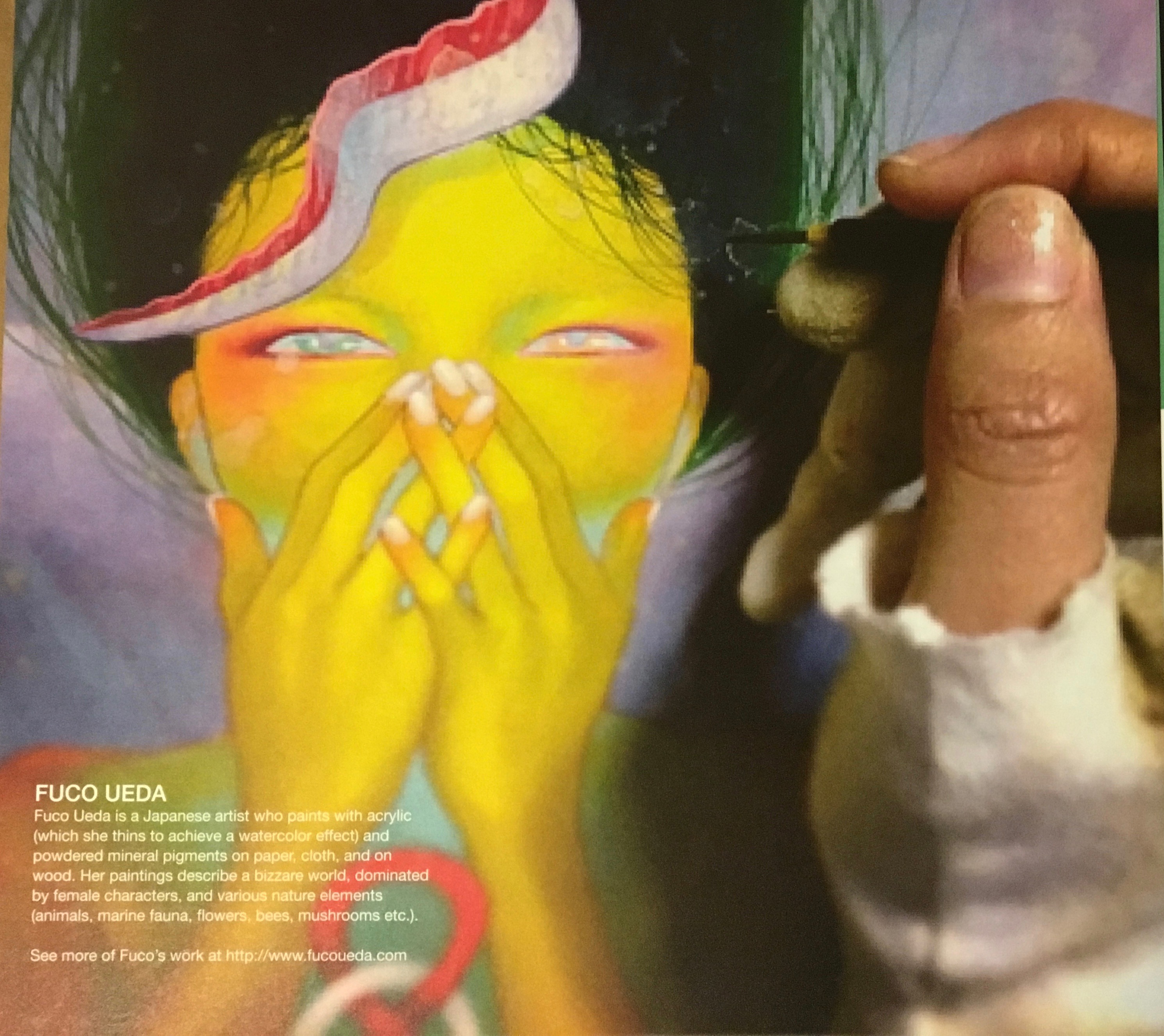 You’ll also find a little teaser for what’s coming to the VMP June Member’s Store in there. 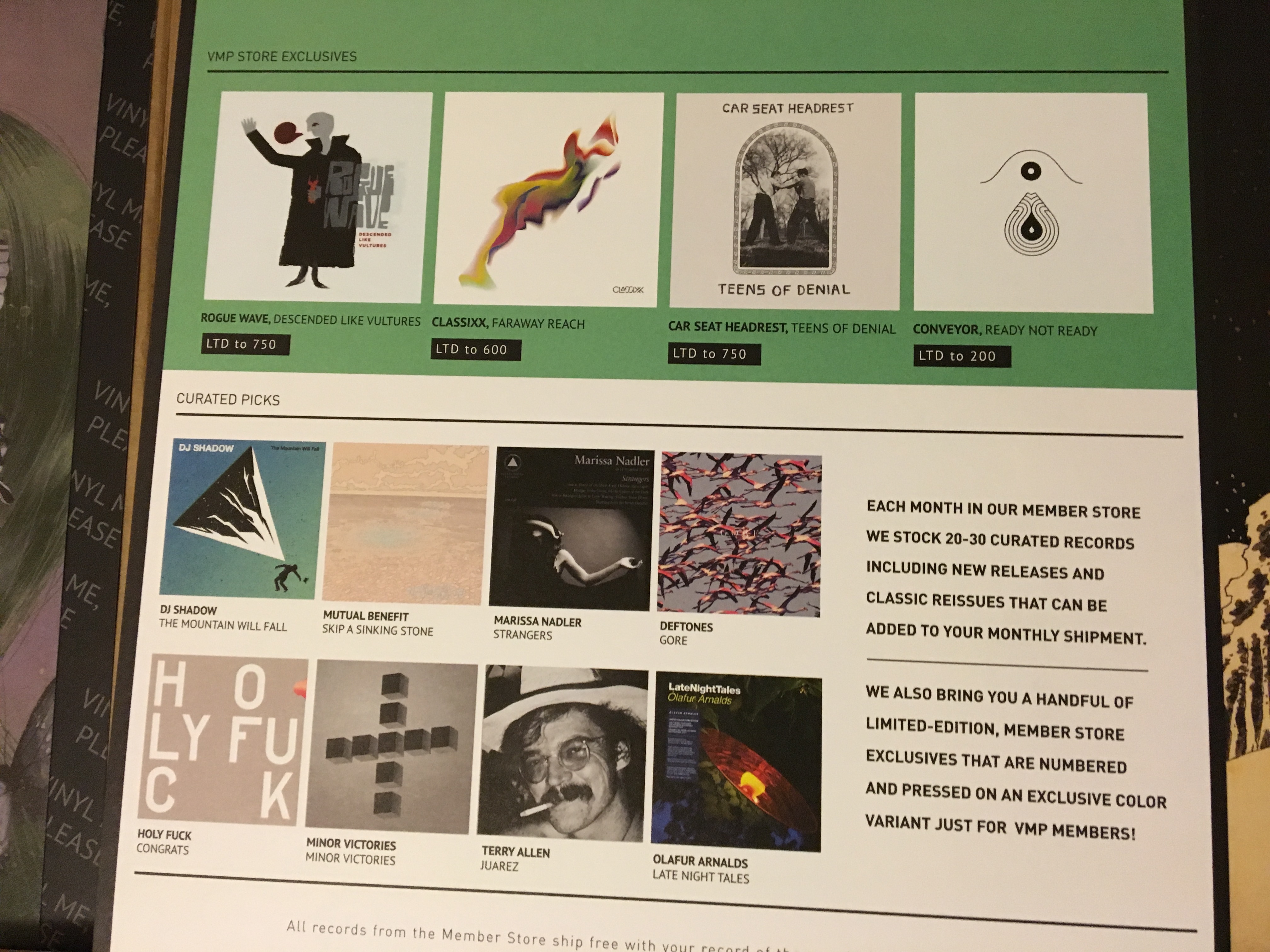 Before you rip open the plastic and start digging through that sleeve, make sure to take note of the all-important info on these stickers. Hi-five, VMP. And Members, give yourselves a pat on the back as well. 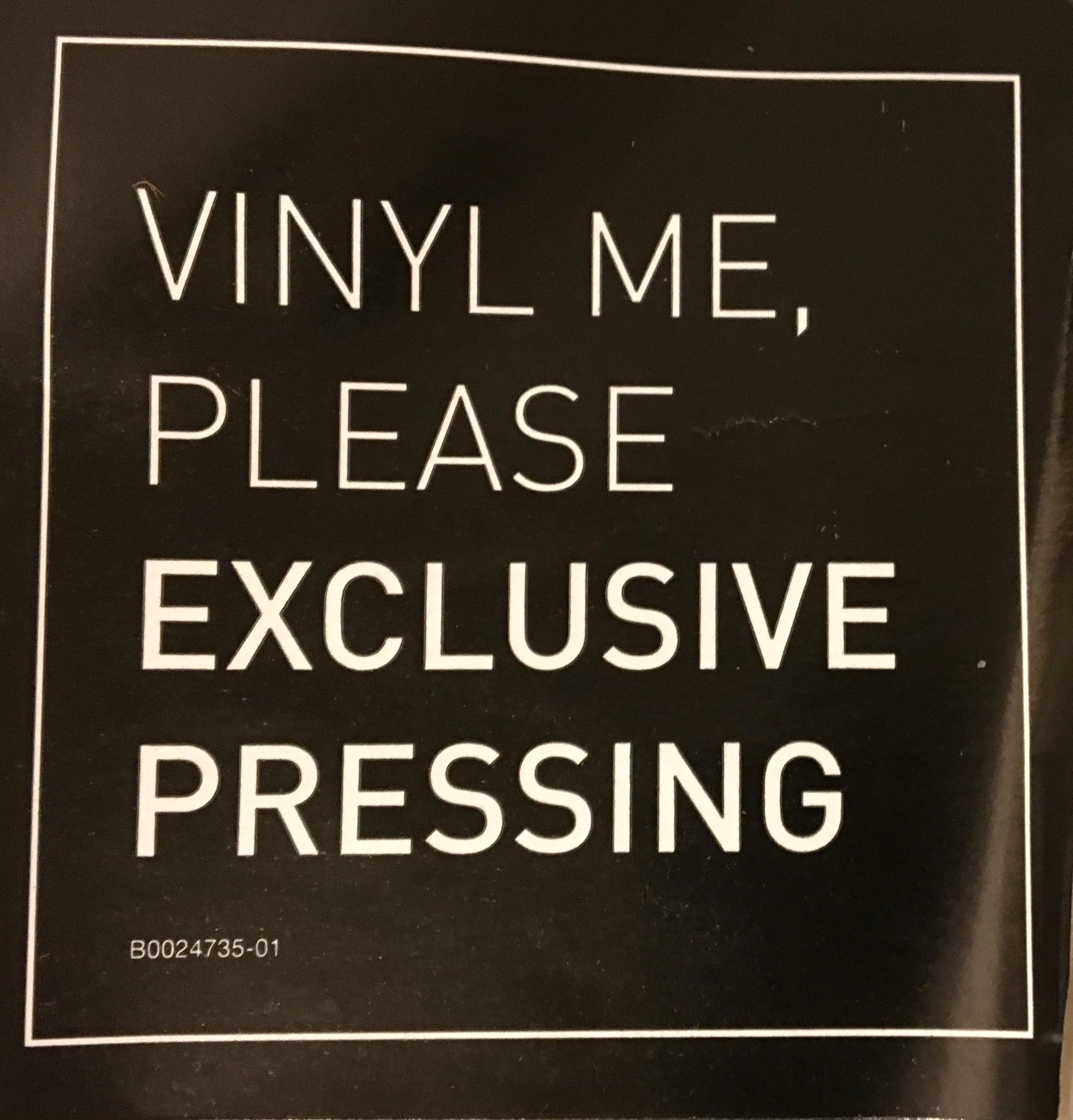 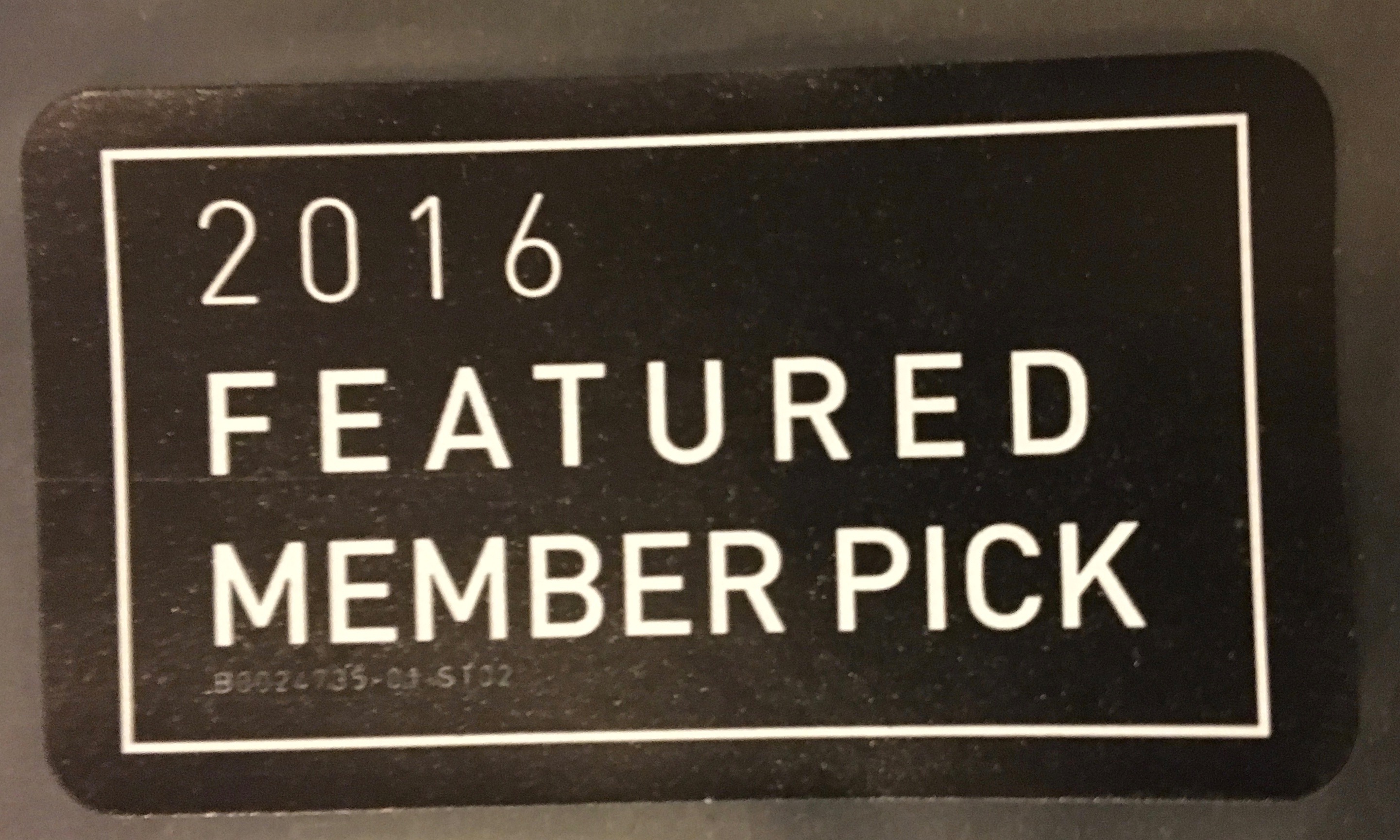 Once you get that plastic off, have a gander inside that gatefold … ’cause it’s a pop-up! Which would seem a bit silly if it weren’t so fucking cool. 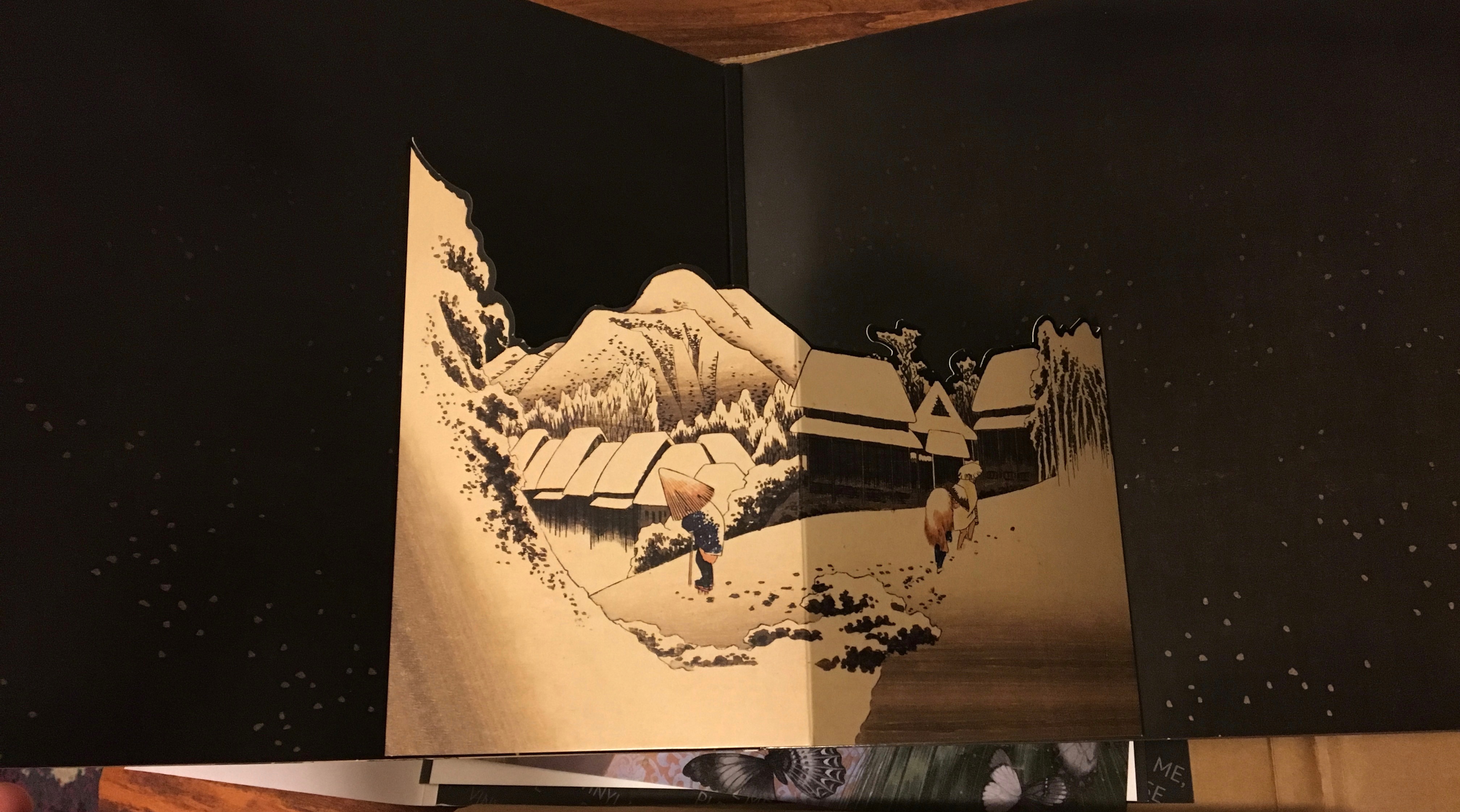 Inside those sleeves you’ll find a full page of liner notes with pics of the band in the studio circa 1995 and full lyrics to every track on the album. Nice. 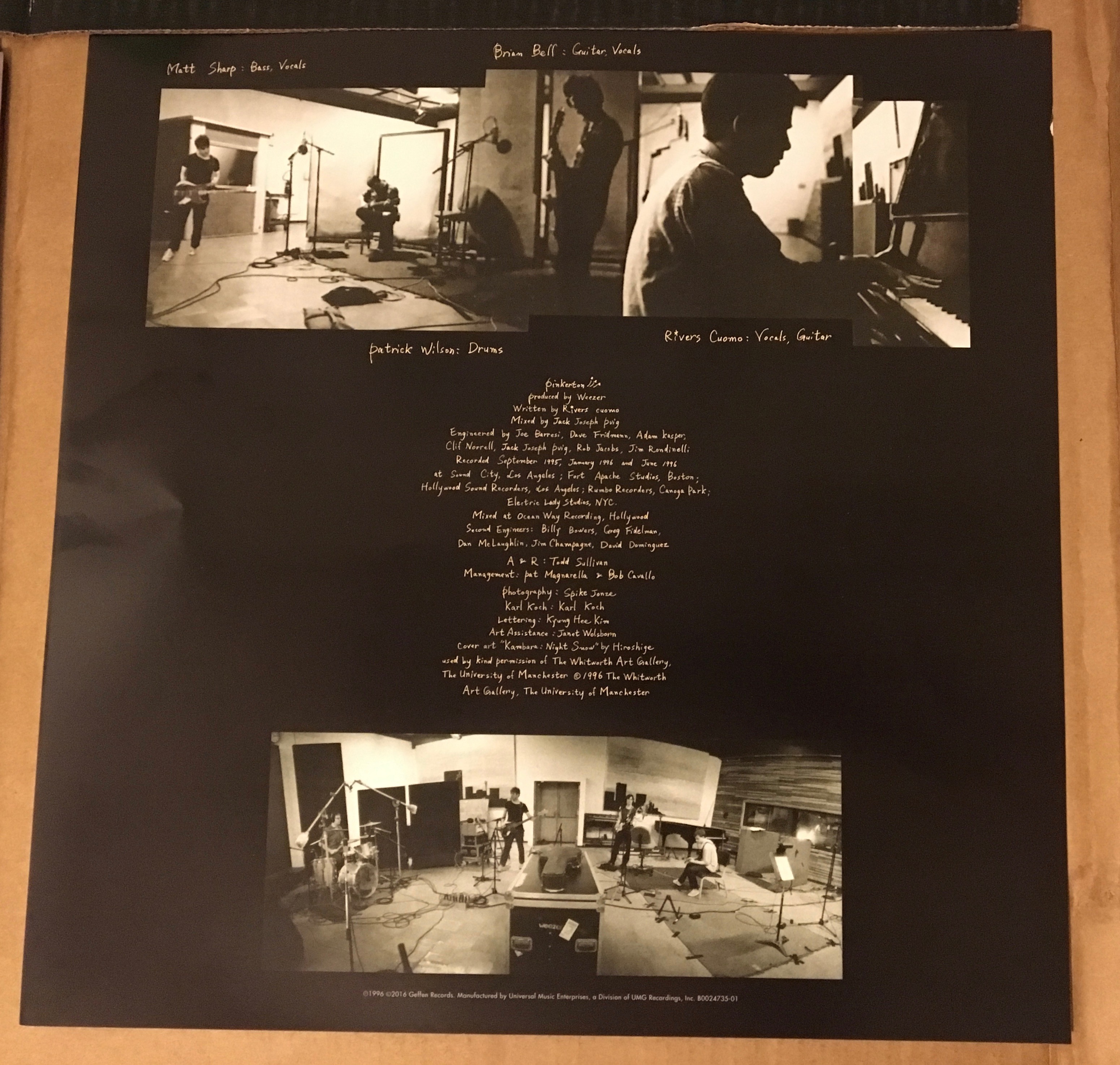 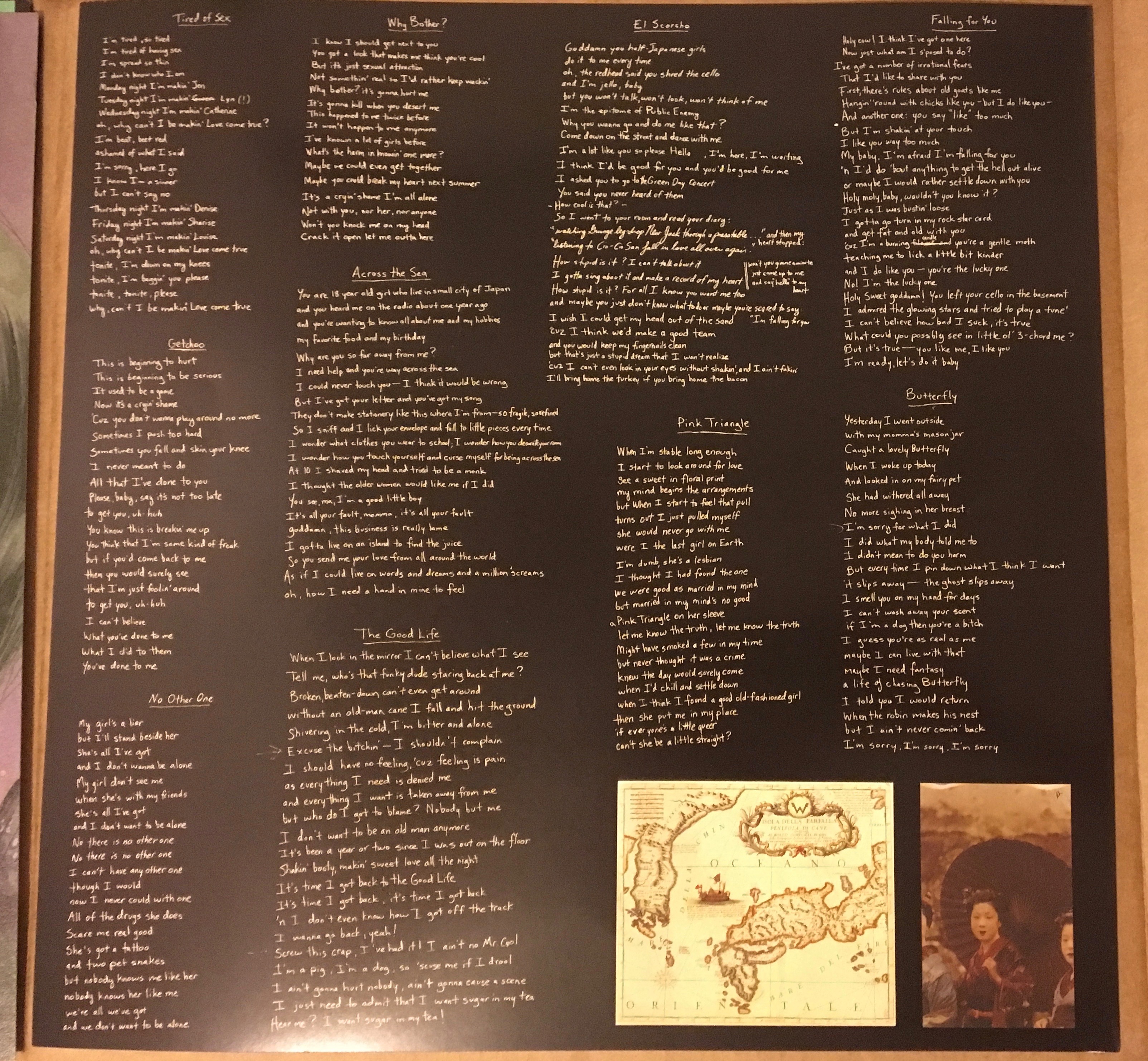 And yeah, you’ll also find this gorgeous pressing of the album itself. My God, just look at that marbled, translucent blue vinyl. Well done, VMP. 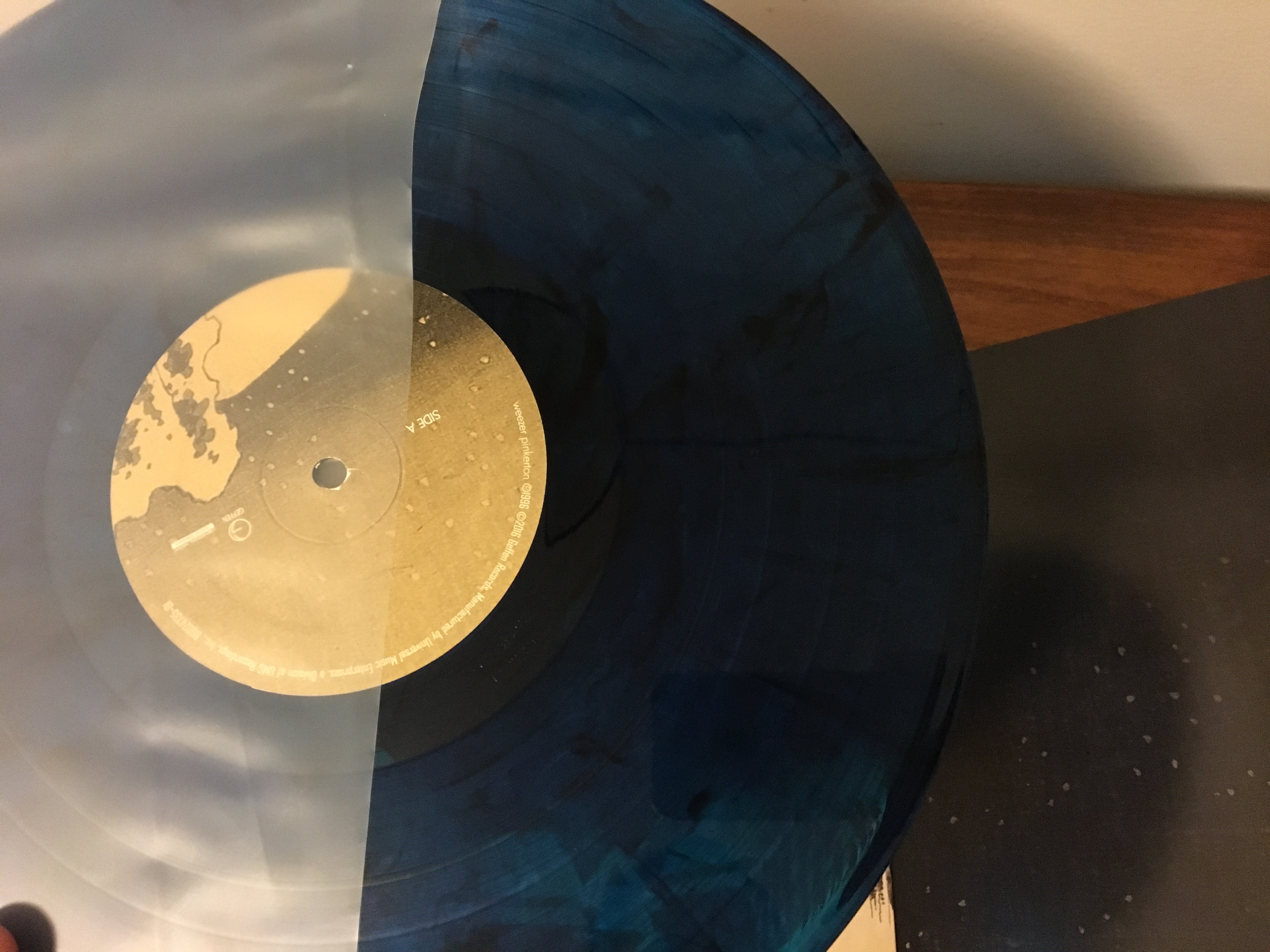 And yes, it’ll look pretty slick on your deck. 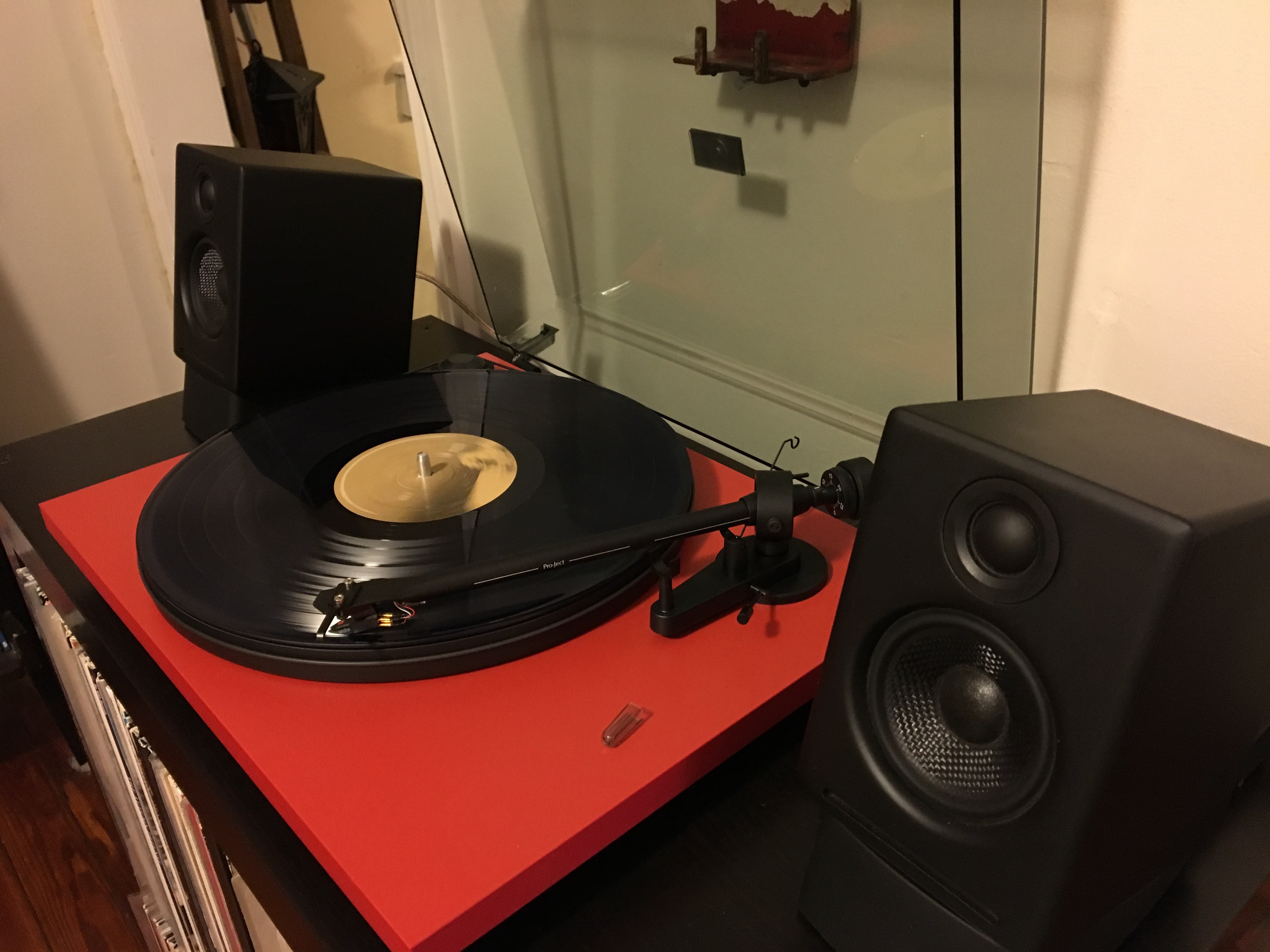 How’s it sound? Like sitting alone in a dark room with nothing but the thoughts in your head and the experiences that brought them there. Darkness passes and you come to realize how fragile human beings are. Bodies are made for lust. Hearts are made to love and made to break. Sometimes you break. Sometimes you get broken. Sometimes lust and love and pain all come in the same package. And somehow you have to be ok with that. But, ya know, with guitars.

I’ll say that Pinkerton is not my favorite Weezer album. I still prefer the power pop irreverence of The Green Album. But it’s impossible to overlook the sheer bravado of the band’s work on Pinkerton. Poppy, crunchy, catchy, and oh so self-aware, few albums from the ’90s were as daring or divisive as this little number from Weezer. It’s been nice to dig back into this album and revisit Mr. Cuomo & Co in all their anthemic charm. Thanks Vinyl Me, Please for making that happen. And for putting it all into such a pretty package. Of course, you may not always love the music VMP sends your way, but it will always be an adventure … and that’s the whole point of music.

A big THANK YOU to our friends at Vinyl Me, Please for sponsoring this subscription. Don’t forget to check out the official Vinyl Me, Please website and sign up to get some choice wax delivered right to your door each month! Can’t wait to see what tasty treat is in store for June.