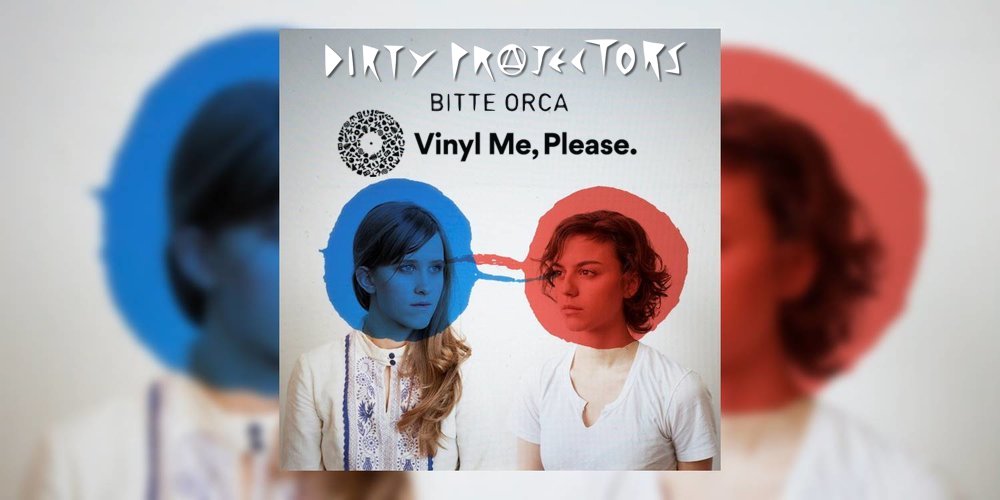 Here’s how it works. You send Vinyl Me, Please some of your hard-earned money (plans start at $25/month) and they send you one carefully selected album they feel is an Essential addition to any record collection. Easy, right? Each custom pressing (often on colored vinyl!) also comes with killer special features like original artwork, informative booklets, and even a recipe for a companion cocktail. You’ll have membership privileges in the VMP shop too, which means you can grab a copy of previous VMP selections from the archives – including December’s immaculate reissue of Aretha Franklin’s iconic album I Never Loved A Man The Way I Love You – not to mention a bevy of rare releases pressed exclusively for the folks at Vinyl Me, Please. The store is open, and Team VMP are dropping fresh new selections to their stock every single week. Do not miss out.

What’s in the box for January? Vinyl Me, Please is kicking off the new year in style with an oh-so sexy reissue of Dirty Projectors’ 2009 indie rock classic Bitte Orca.

For the Love of Music, Please DO NOT BEND (or, how I learned that stillness is still the move, and an all-time indie groove)

Most folks would tell you that in the music biz, bands typically don’t get more than one or two albums to find their groove. History would probably prove them right. Luckily, that sort of short term logic has never really heard true on the indie rock scene, with many bands delivering their defining work later in the game. Such was the case for several veteran indie acts in 2009. Among notable groups who found breakout success in that fabled year are Animal Collective (who’s Merriweather Post Pavillion was their 8th album), Phoenix (Wolfgang Amadeus Phoenix was the band’s fourth release), and Grizzly Bear with Vekatimist (their 3rd full length). Add into the mix a couple of beyond buzz-worthy debuts from the likes of The XX and Japandroids, and you’ve got what’s become a bit of a legendary year for indie rock.

Among the late breakers to find surprising success in 2009 was David Longstreth, who’d spent the bulk of the early-2000s cranking out meticulously crafted art rock records with his band Dirty Projectors. More a perpetually changing collective than a proper band, Dirty Projectors had long been held as champions of New York’s indie underground – which means they were little known elsewhere. That fact evinced by the relatively dismal sales of their first five albums.

Perhaps driven to make a next level sort of jump, Longstreth and co. actually jumped labels, signing with Domino Records in 2008. Upon doing so, they promptly hit the studio to begin work on their new album, Bitte Orca. Little did they know, but a year later Dirty Projectors would find themselves with a breakout hit song to their credit, and genre-defining album that was a mainstay on virtually every end of year list in 2009. They’d also find themselves collaborating with the likes of David Byrne and Bjork.

Now, if you listened to the radio at all in 2009 (or the year after), then the breakout hit will be more than a little bit familiar. Even a decade after that single broke and helped change the fate of Dirty Projectors, “Stillness is the Move” (Bitte Orca‘s lead single) remains a positively infectious indie pop banger more than worthy of its #2 ranking in Pitchfork’s “Best Tracks of 2009” list. And we’d wager good money that pretty much anyone who’s heard “Stillness is the Move” in the past decade has slotted it into prime position on a mix tape of some importance.

As for the album itself, “genre-defining” still doesn’t seem quite the right label for Bitte Orca, if only because the album refuses to pigeonhole itself to any single sound or form. Rather, Longstreth and the band take a kaleidoscopic approach to music on Bitte Orca, blending everything from shimmering R&B grooves, to poppy break beats, to folky indie balladry with dashes electronica to craft an adventurous, shape-shifting album that didn’t sound quite like anything that came before … or after for that matter. One that also happens to feature electrifying hooks, lavish vocal arrangements, and spirited lyrical flourishes as playful and profoundly incisive as they are mournful and magnificently abstract.

But hey, I’m gonna go ahead and assume you knew all that already. Because you have heard Dirty Projectors’ Bitte Orca right?

As fare as cover art goes, Bitte Orca is sort of an all-time favorite for me. And yes, there’s a lot going on here. So much so that entire articles have been written on the subject. Rather than bore you to tears with my own limited insights, I’ll simply direct you to this wildly informative Pitchfork interview with designer Rob Carmicheal, who actually crafted this beauty himself. Little known fact, but Carmicheal also designed the cover for Animal Collective’s Merriweather Post Pavillion that same year. Well done, Rob.

It’s a little tough to tell in the picture, but VMP’s pressing of Bitte Orca features a super slick, spot-gloss finish (which means the blue and red blobs are glossy, and the white is not).

Before you dig any further, be sure to take note of the shiny foil stamping in the corner forever proclaiming that, at least in the eyes of Vinyl Me, Please, Dirty Projectors is indeed and Essential album.

Just FYI – there’s a slick little VMP exclusive obi-strip cradling the spine of your album every month, and you’ll absolutely want to spend a moment or two with it, if only so you can confirm the band and album name, not to mention the album’s catalogue number in the Vinyl Me, Please vaults.

Flip it over and you’ll find a few brief but informative words about why Bitte Orca made the cut as an Essentials pick.

And if you like to indulge in an adult beverage while you spin your new copy of this Dirty Projectors classic, there’s an album themed beverage noted on the inner tab. And this one was actually selected by Dirty Projectors’ mastermind David Longstreth himself.

As with every VMP Essentials release, you’ll find an original 12″ x 12″ print inside your box. Of late, those prints have largely been photographs of the artists in various states of being. This candid, collage-type thing (courtesy of Robby Moncrief) finds David Longstreth working out a track or two in his own bedroom … and wearing a bicycle helmet.

Now, there aren’t a ton of extras included in this month’s package. But that’s largely because the albums themselves are legit works of art that cleverly call back to Bitte Orca‘s iconic album cover – i.e. one sports a blob of blue …

and one sports a blob of red.

If you’re still not getting the picture, here they are side by side.

And yeah, these blobby beauties are fit to bring a little style, and some serious art-rock energy to any turntable.

How do they sound? Like finding a decade old mixtape made from a great friend, or a lost lover, and wallowing joyously in the moments that once passed between you … even if those moments weren’t always joyous.

I’ve been preaching for a while now that possibility is what makes being a music fan such an adventure. The same could be said about joining a record club as well. But sometimes re-discovery is even more fun that finding something new. For proof of that, see Dirty Projectors’ Bitte Orca, a once beloved album that I hadn’t listened to in who knows how many years. Given the chance to revisit this album after so many years, I honestly cannot imagine how I’ve been coping without it. As such, I’d like to offer a hearty high-five to Team VMP for putting this record back on my radar, and on my turntable for the very first time.

A big THANK YOU to our friends at Vinyl Me, Please for sponsoring this subscription. Don’t forget to check out the official Vinyl Me, Please website and sign up to get some choice wax delivered right to your door each and every month! Here’s hoping there’s more crunchy treats in the box for February!