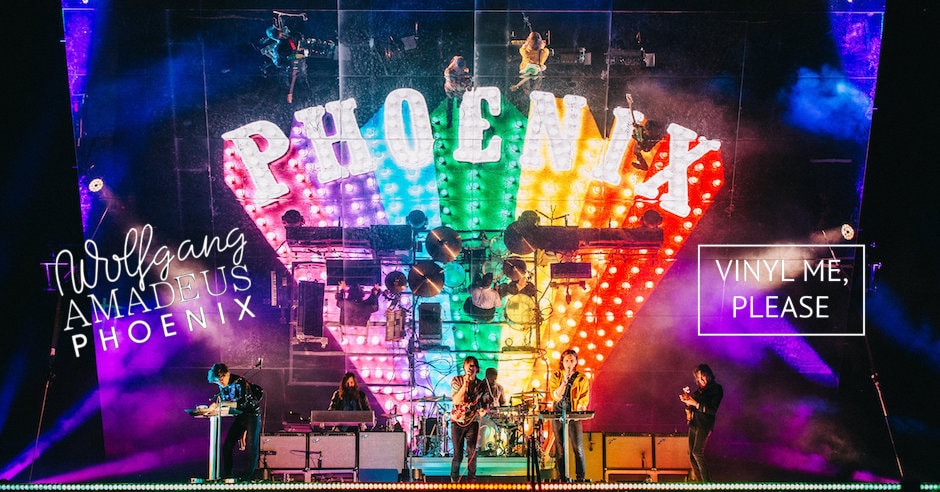 Here’s how it works. You send Vinyl Me, Please some of your hard-earned money (plans start at $25/month) and they send you one meticulously selected album they feel is an Essential addition to any record collection. Easy, right? Each custom pressing (often on colored vinyl!) also comes with killer special features like original artwork, informative booklets, and even a recipe for a companion cocktail. You’ll have membership privileges in the VMP shop too, which means you can grab a copy of previous VMP selections from the archives – including May’s revelatory release of Experience Unlimited’s Black Fire Records debut Free Yourself – not to mention a bevy of rare releases pressed exclusively for the folks at Vinyl Me, Please. The store is open, and Team VMP are dropping fresh new selections to their stock every single week. Do not miss out.

So, what’s in in June’s box, you ask? What would you say to a 10th anniversary reissue of a bona fide synth-pop masterpiece from one of the 2000’s most underrated bands? 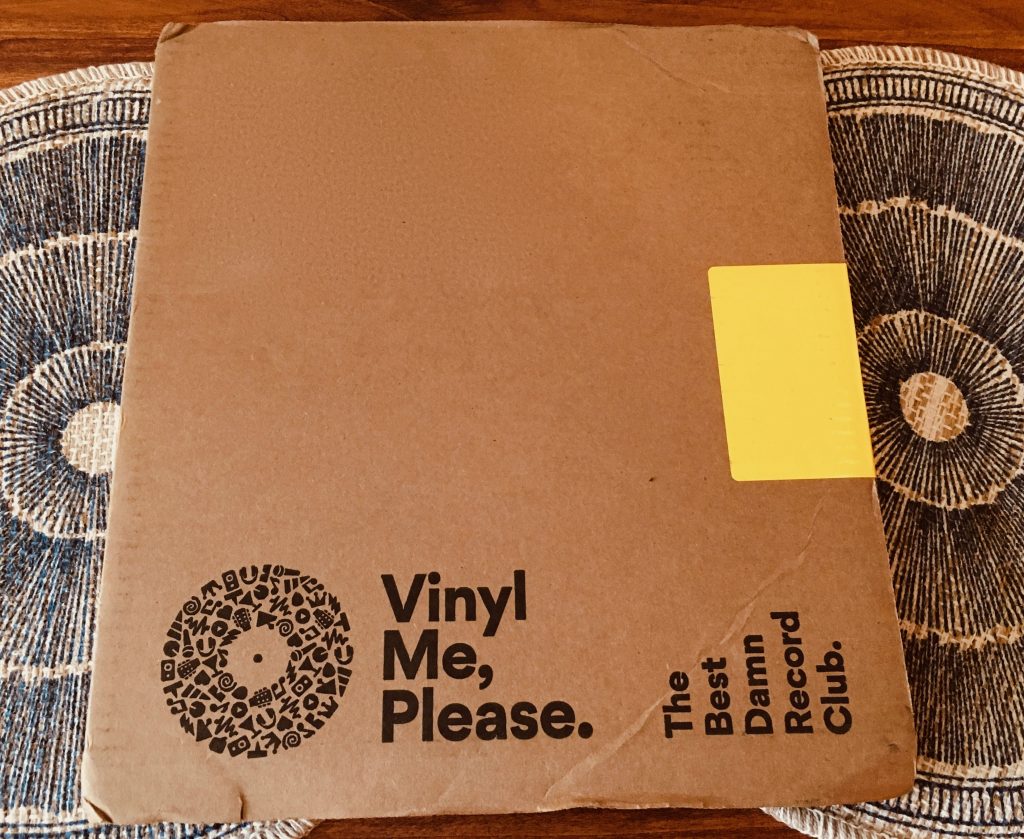 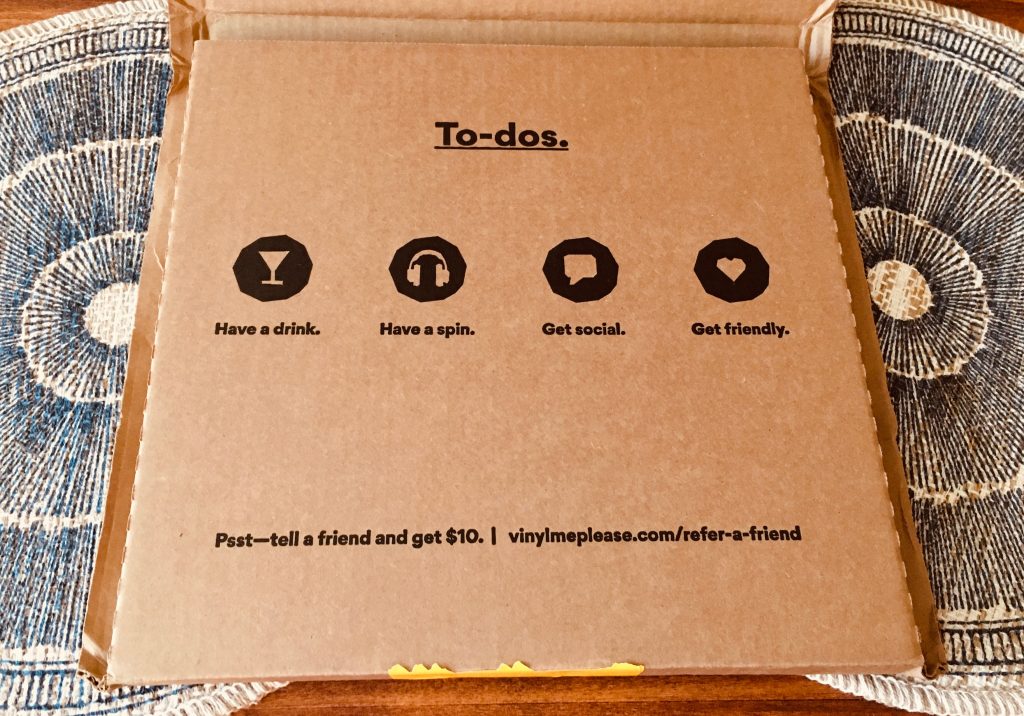 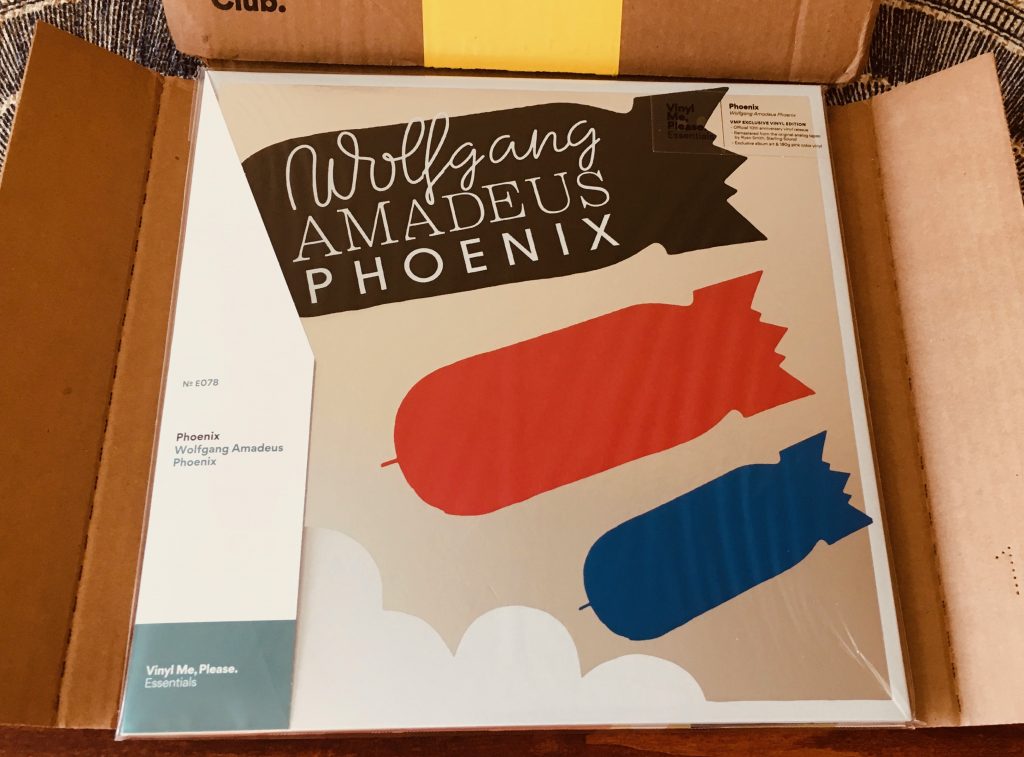 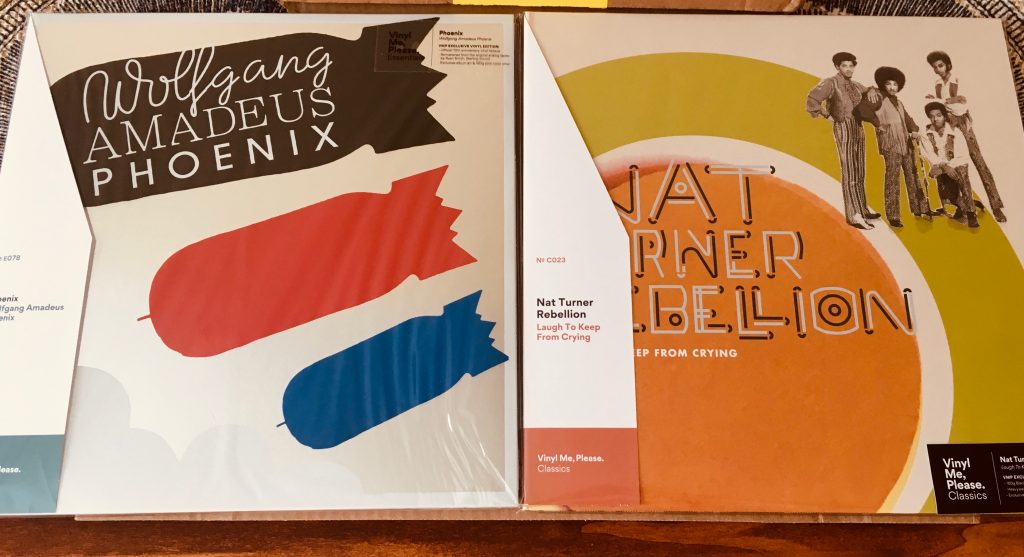 Had to go ahead and grab myself a copy of VMP Classics’ first ever pressing of Nat Turner Rebellion funk as f**k Laugh To Keep From Crying this month, ‘cause when it comes to vinyl I’m basically a slave to my FOMO. I regret nothing.

Make no mistake, even if it is one that suffered mightily from rampant overplay via radio/commercials/movies/etc., Wolfgang Amadeus Phoenix is the definition of pop masterpiece, though I should probably go ahead and confess to being a slightly less than impartial voice on the topic of Phoenix. Point of fact, most of my running mates at the time would likely tell you that between the years of 2003 and 2009, I was as fiercely a devoted fan to this band’s unwieldy synth-pop magic as anyone around. So much so that I also regard Phoenix’s second and third albums (Alphabetical and It’s Never Been Like That) as minor pop masterpieces in their own right.

Still, as well versed as I was in the band’s near impeccable synth-tinged oeuvre prior to Wolfgang Amadeus Phoenix’s release, I was also well aware that their rapturously poppy approach to music was all but doomed to eventually burn out in a flame of boorish monotony, if only because there just had to be a limit to how far Phoenix could stretch their sound, right? As such, even as I was waiting with baited breathe for Phoenix to release Wolfgang Amadeus Phoenix, I was also fully expecting it to be the album that saw their gilded palace of synth-pop finally come crumbling down.

That didn’t happen. Not only did it not happen, Wolfgang Amadeus Phoenix actually saw the band fortify said palace with a rapturous 10 song set reflecting the purest distillation of the deceptively simply pop/rock sensibilities that made the band’s previous albums so damned intriguing. In the process, Phoenix improbably transformed themselves from savvy but little known indie pop mavens into Grammy winning, breakout sensations whose infectious new songs could be heard every time you turned on the radio, or the television, or even stepped into a market to pick up a few essentials. Almost overnight, Phoenix found themselves playing before sold out festival crowds gleefully singing their songs back to them every night.

It’s not exactly hard to understand — even a decade after its release — why Wolfgang Amadeus Phoenix connected with such a broad new audience. The songs contained within the sonic walls of Phoenix’s propulsive pop opus are rife with enough shimmering melodies, catchy hooks, and playful lyricism to enrapture even the most casual of pop fans, while the satiny synths and jangly guitars were more than enough to catch the ear of the indie rock set. Pepper in an audacious air of romanticism potent enough to melt the hearts of both factions and, well, Phoenix found themselves at the center of a perfect storm of pop culture notoriety.

That storm grew bigger than anyone — even staunch supporters like myself — could’ve imagined. That it grew from that rarest of events in the music biz (i.e. a band’s crowning artistic achievement fueling their breakout success) just seemed like the icing on top of the album that goes down sticky sweet. In case there was any question, Wolfgang Amadeus Phoenix has only gotten sweeter with age. And it’s ripe for rediscovery by anyone with a sweet tooth for some good old-fashioned synth-pop.

Over the years, the folks at Vinyl Me, Please have delivered a fair share of variant cover art for their monthly selections. Personally, I’ve always been a bit “meh” on the idea of cover variants for albums, because I tend to get very attached to cover art in general. That being said, the shiny alt artwork VMP delivers for Wolfgang Amadeus Phoenix is truly magnificent, and outshines (literally and figuratively) the original in every way possible. Well done, Team VMP. 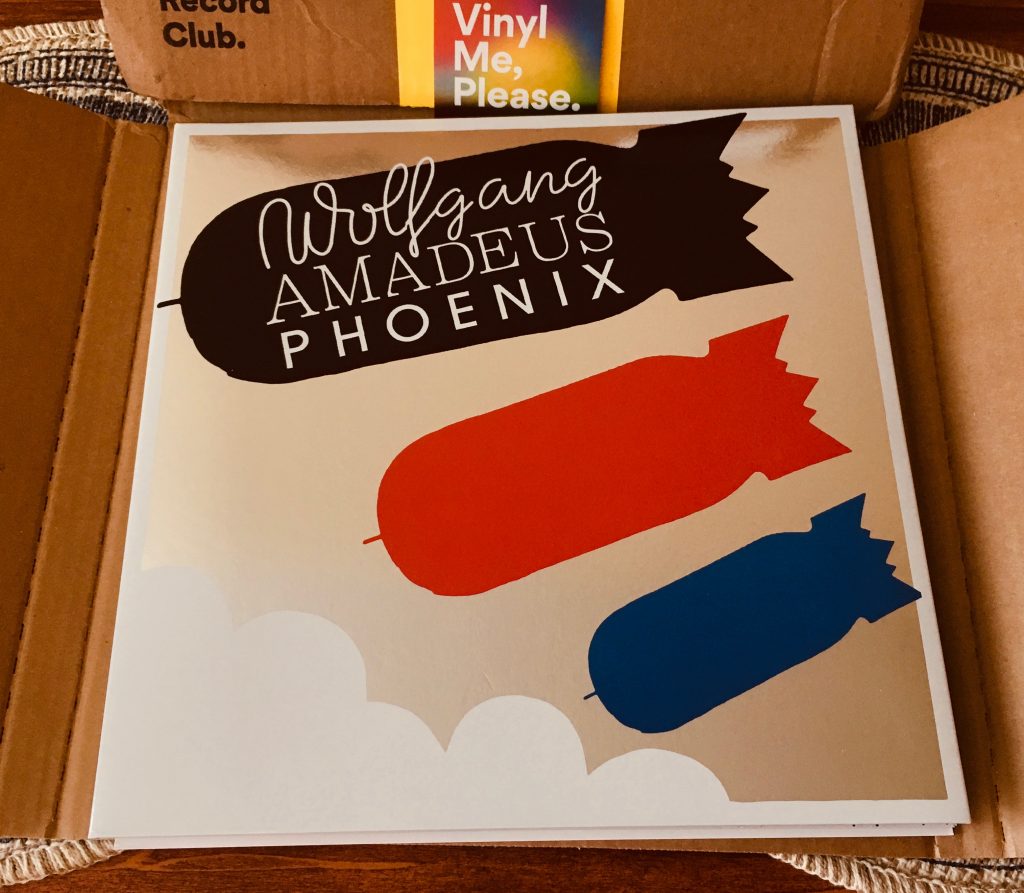 And just so you can get a feel for how shiny that cover is, you can pretty much see yourself in it. 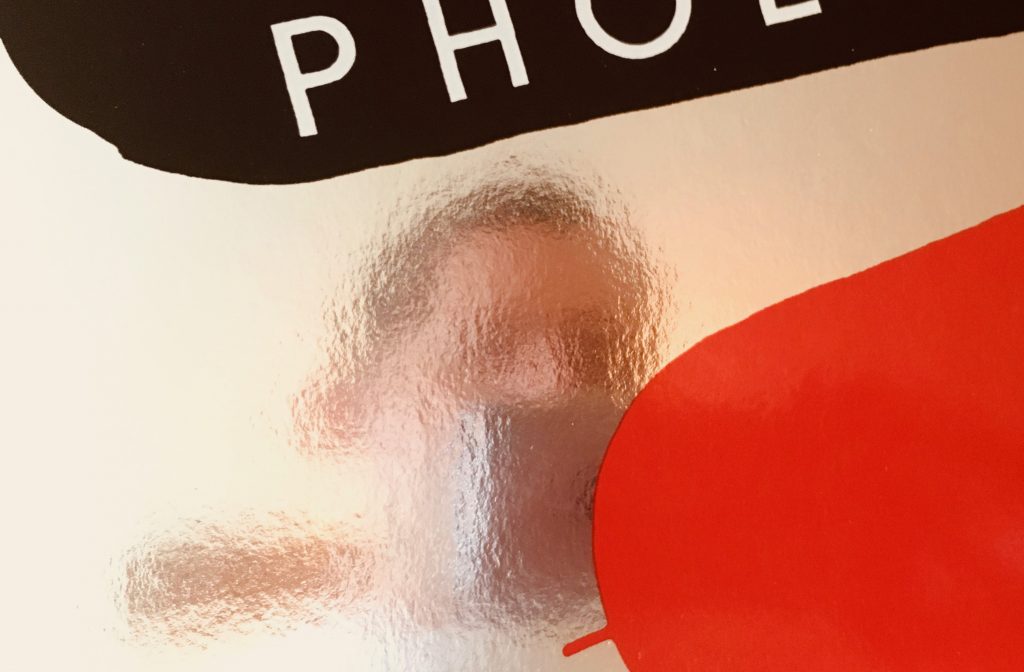 Don’t forget to have a gander at the back of that jacket, either, ‘cause it’s lovely in its own right. 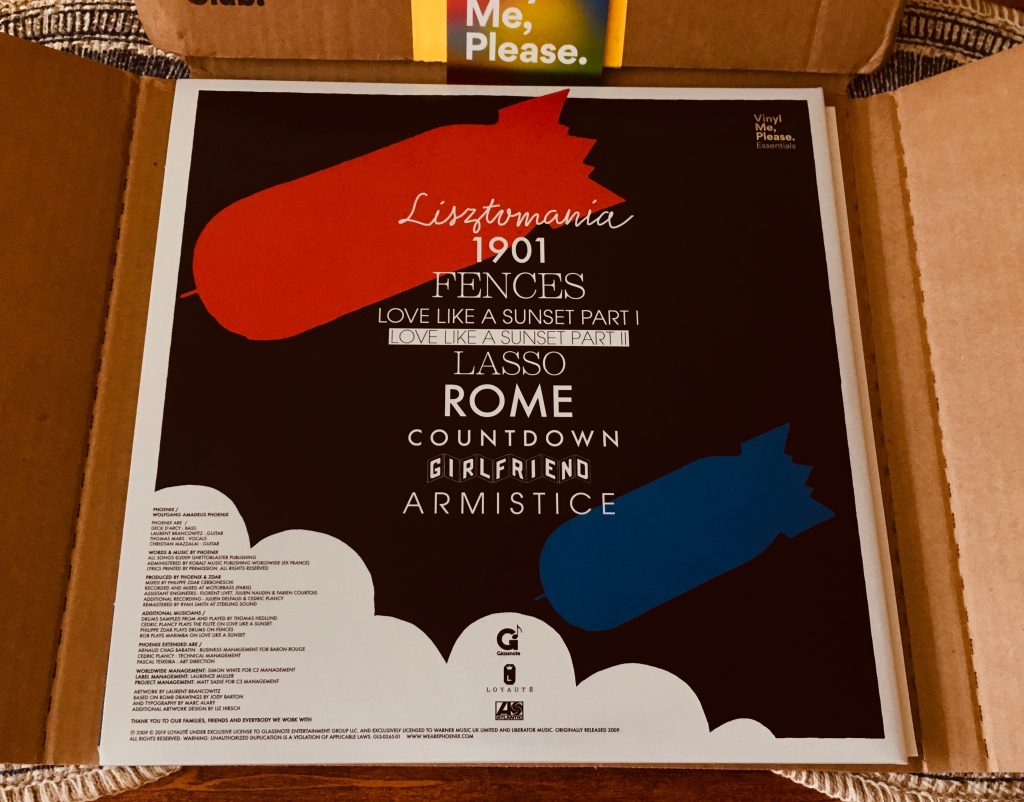 If you like to know who did/played what on an album, that’s also where you’ll find some of the album’s credits. 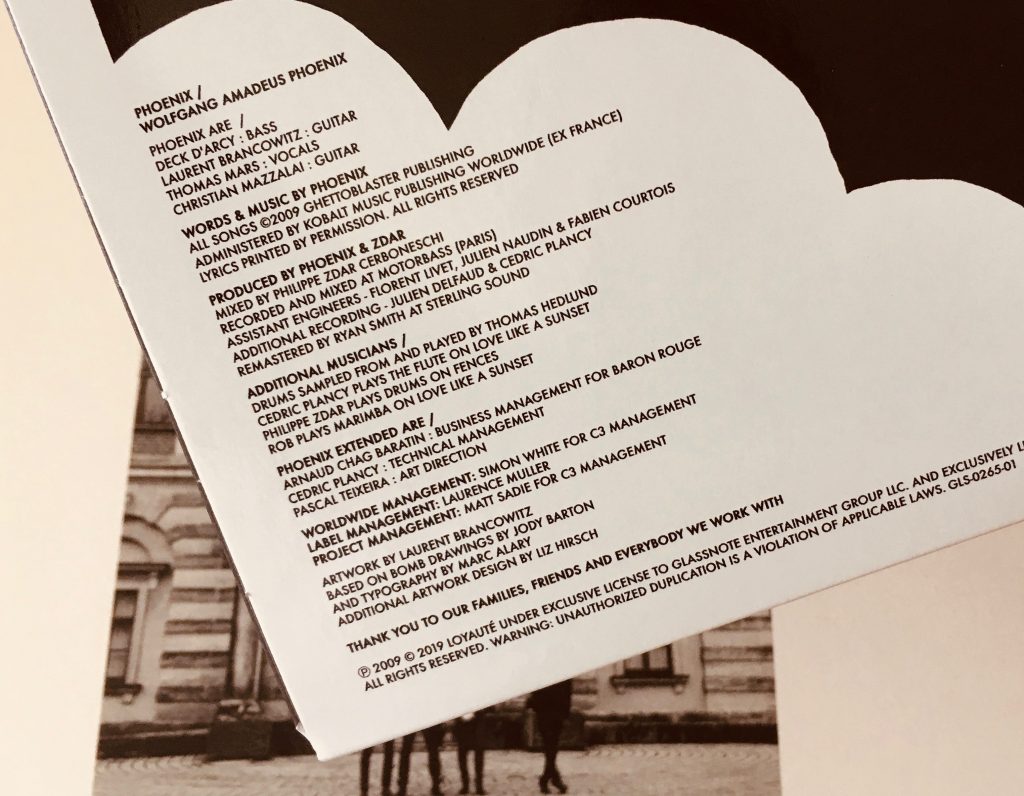 Not to mention this sexy little foil stamp that declares forever and always this version of Wolfgang Amadeus Phoenix as an Essential release. 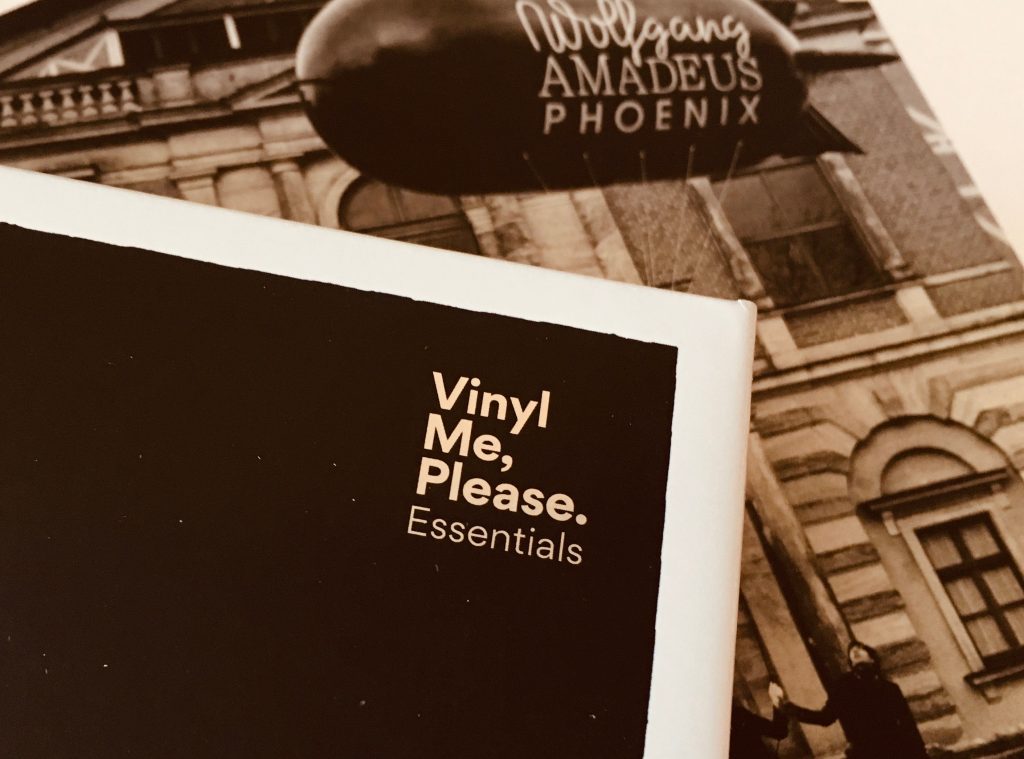 If that should happen to be in question, feel free to check this little sticker so you’ll know exactly what makes this pressing so special. Official (band endorsed) 10th anniversary reissue – check. Remastered from original analog tapes – check. Exclusive album art and 180g colored wax – check. Sure sounds Essential to me. 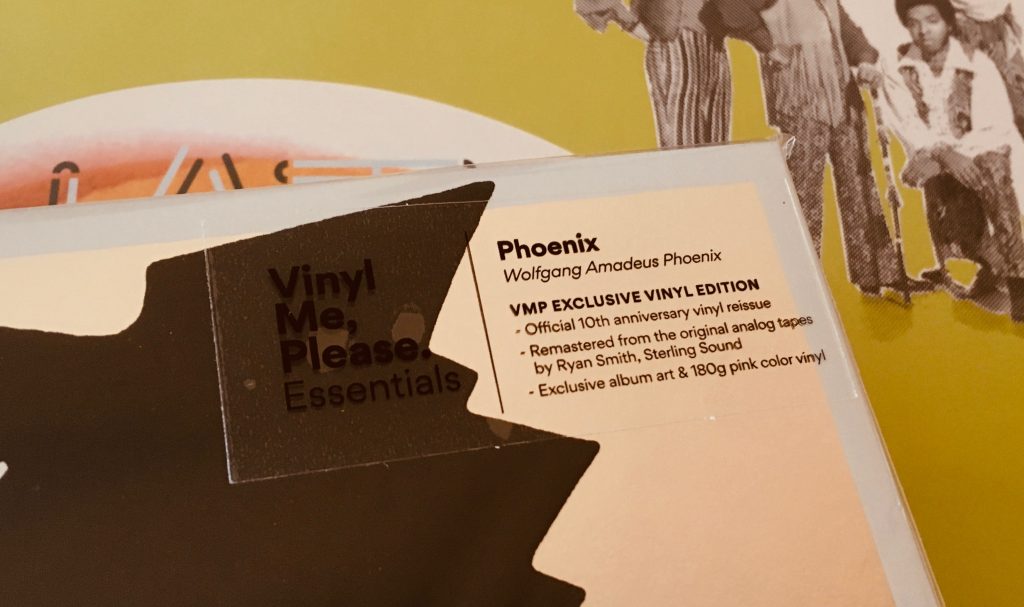 Now, before you dig too far into this month’s package, take a moment to dig the info on the album’s OBI strip, which will tell you the band’s name (Phoenix), the album’s name (Wolfgang Amadeus Phoenix), and the Vinyl Me, Please catalogue number (No. 78). 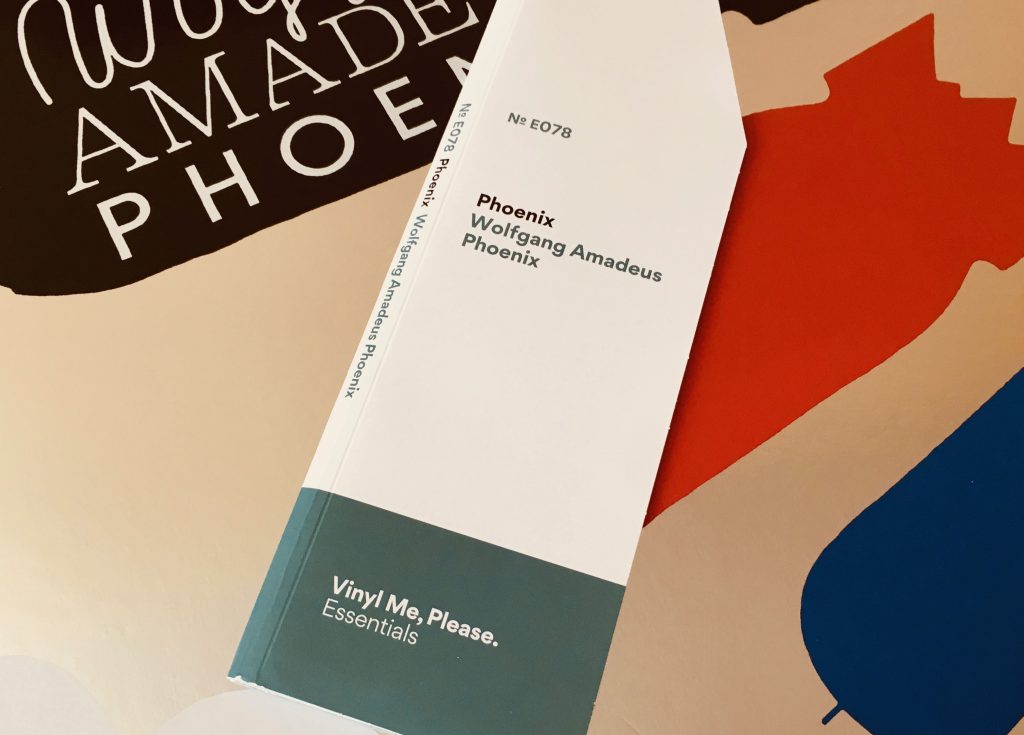 Flip it over for a few carefully chosen words from VMP as to why they think this album is a legit Essential in any record collection. 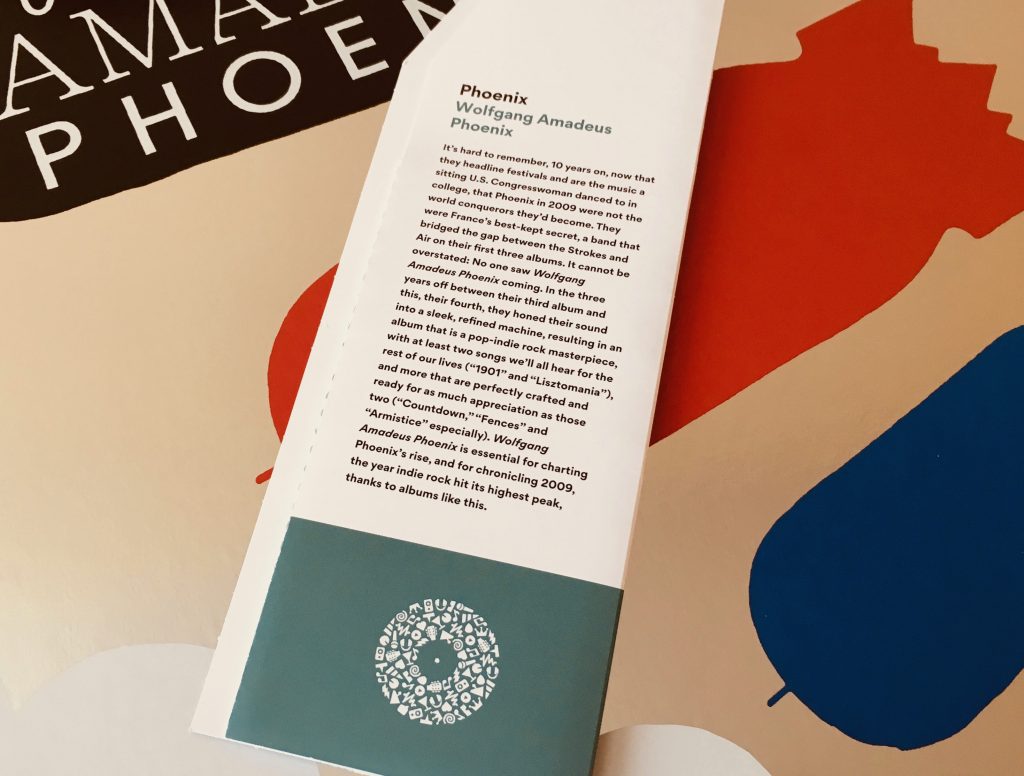 And if you’re the sort who likes to enjoy an adult beverage while you spin your records, you’ll want to check out the “Brandy Armistice” — aka the Wolfgang Amadeus Phoenix companion cocktail. It comes via the folks at Tavernetta in Denver, CO. And it features Cognac and Lillet Blanc, which makes it a suitably French affair. 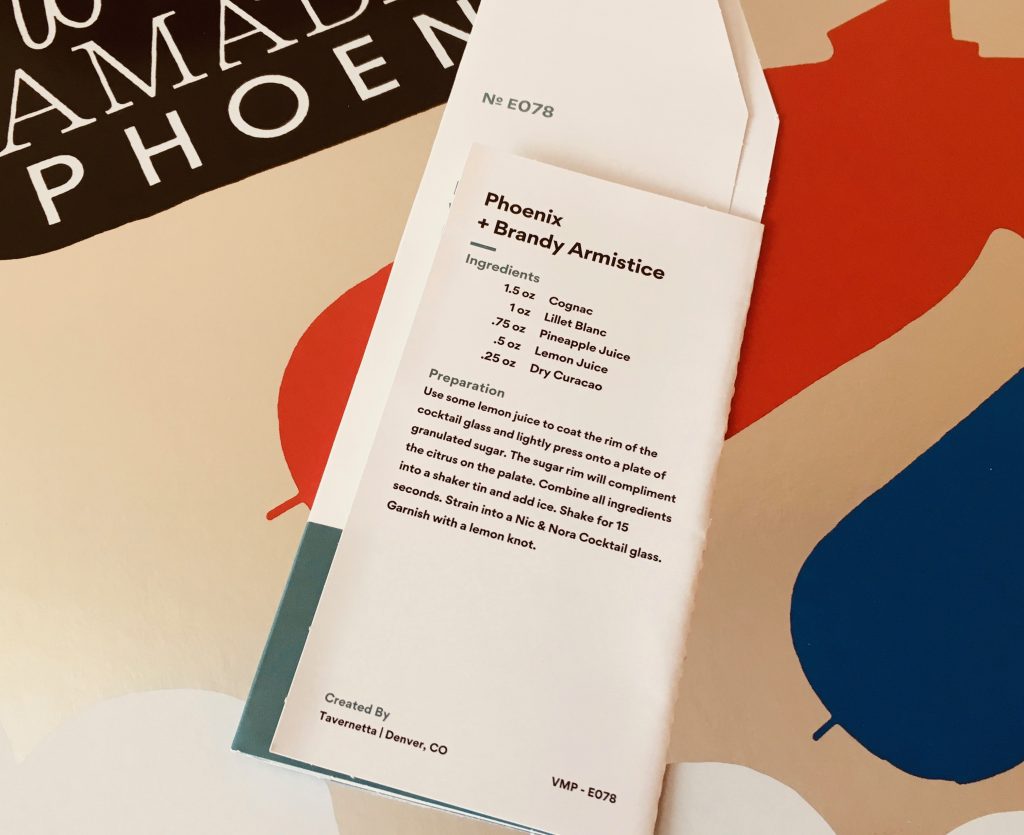 If you’re also the sort who enjoys gazing upon original artwork while spinning wax, well, Vinyl Me, Please has you covered there too … though this month’s album features an original photograph in lieu of the usual digitally conjured confections. Don’t worry, that photograph — courtesy of mixed-media guru Antoine Wagner — is an absolute stunner. 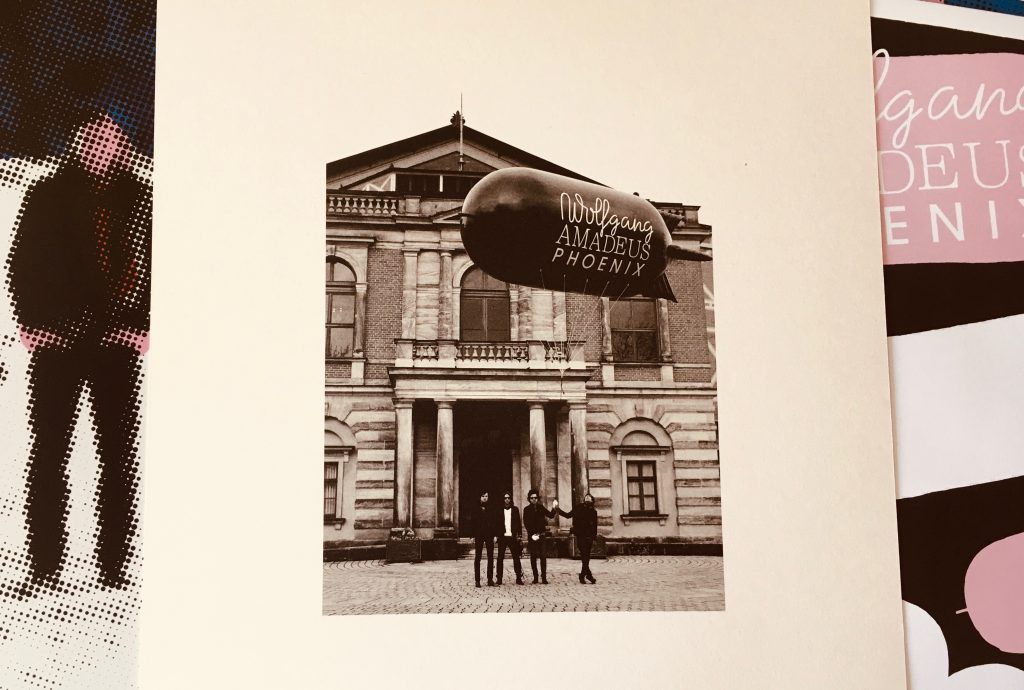 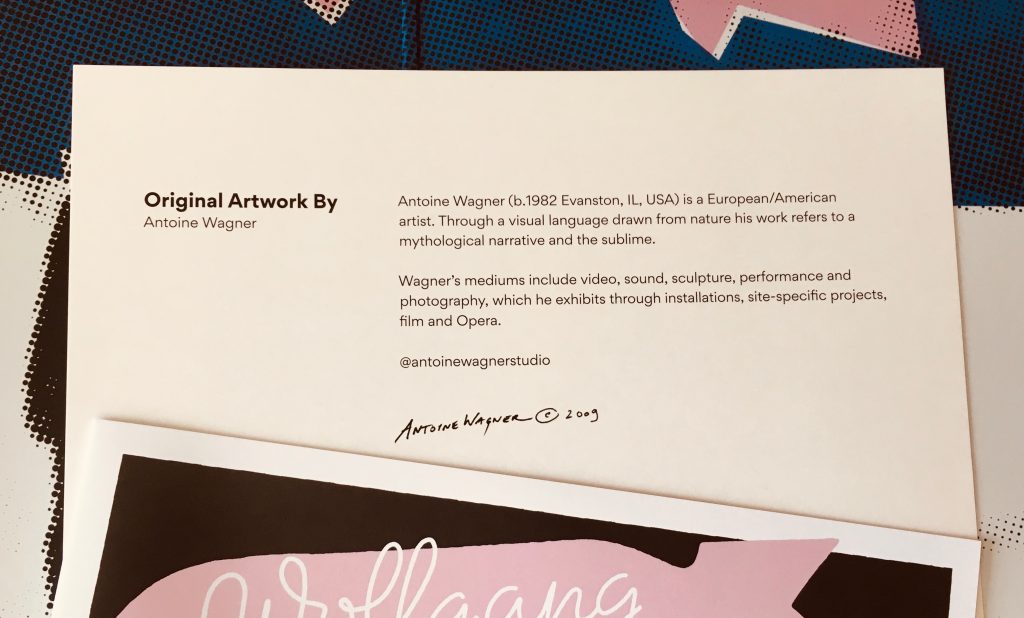 Just in case you were not aware, June is LGBTQ Pride Month, and VMP is celebrating with this lovely little sticker that’ll help vinyl lovers the world over show their love and support for the community. #Pride 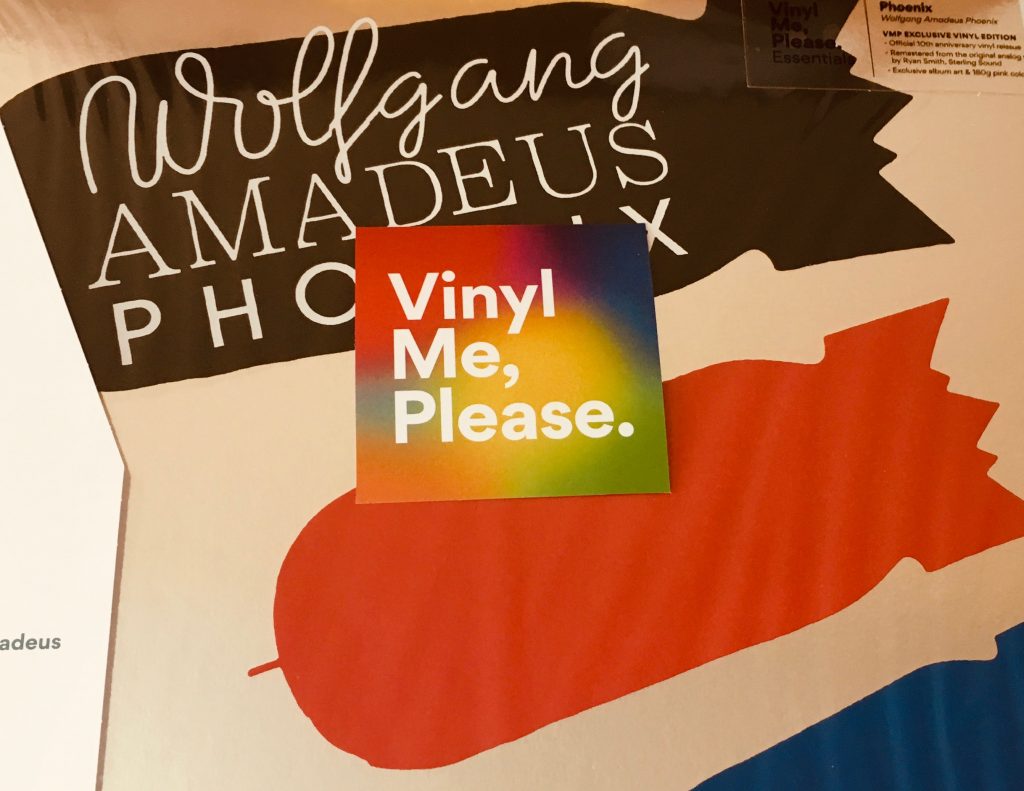 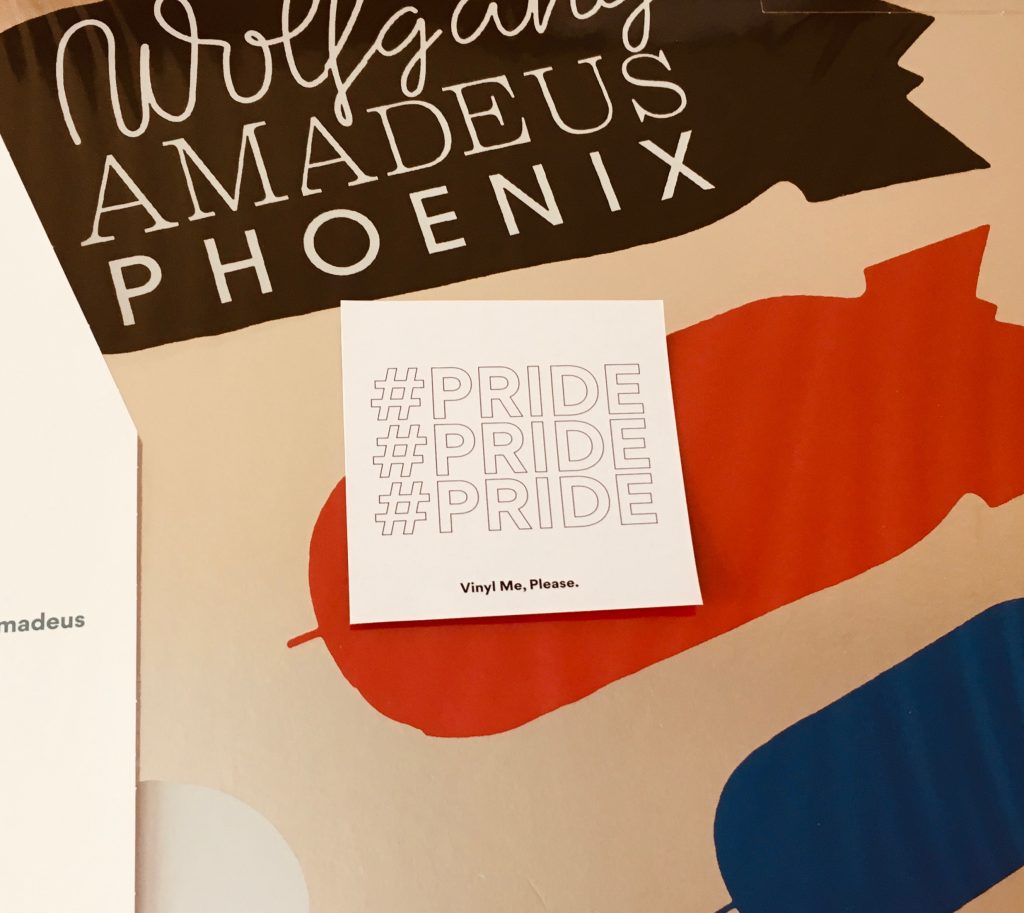 Right then, you’re probably ready for me to go ahead and get to the wax already, yeah? Before we do, let’s have a quick look at the artwork spotting the tip-on gatefold sleeve protecting it, shall we? 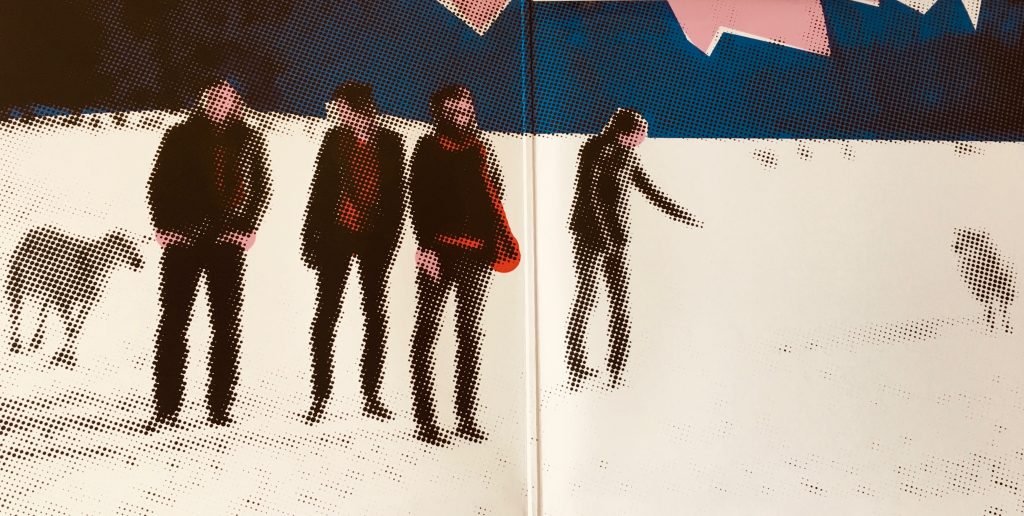 Try and be patient, kids, ‘cause there’s a full lyric booklet included with this 10th Anniversary edition of Wolfgang Amadeus Phoenix inside. It happens to be chock full of killer original photography of the band taken around the time of the album’s recording. And you’re going to want to spend a little time with it before you get spinning. 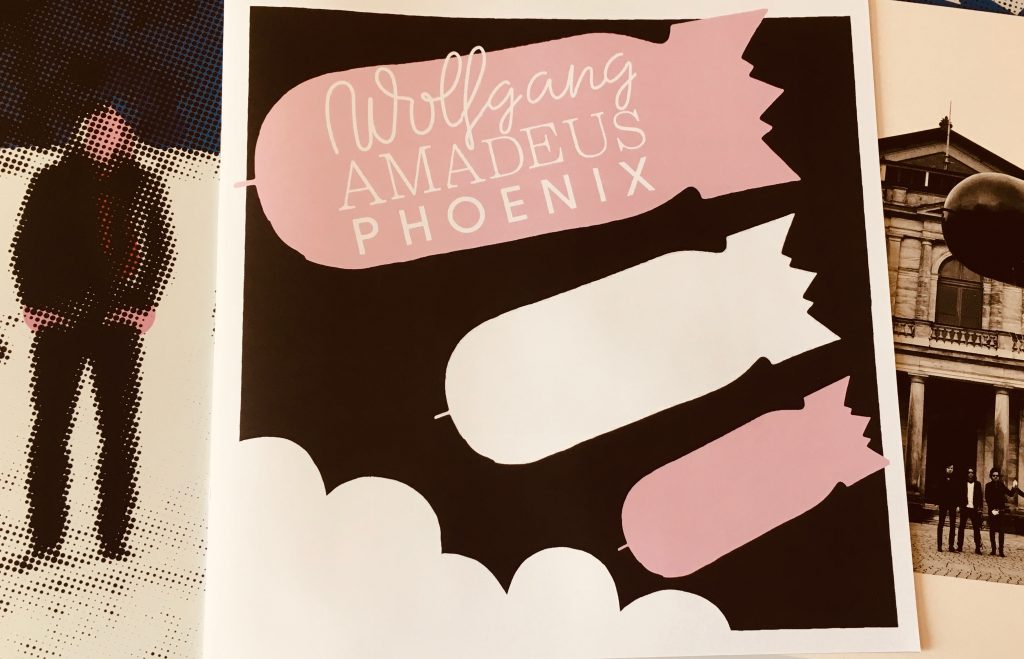 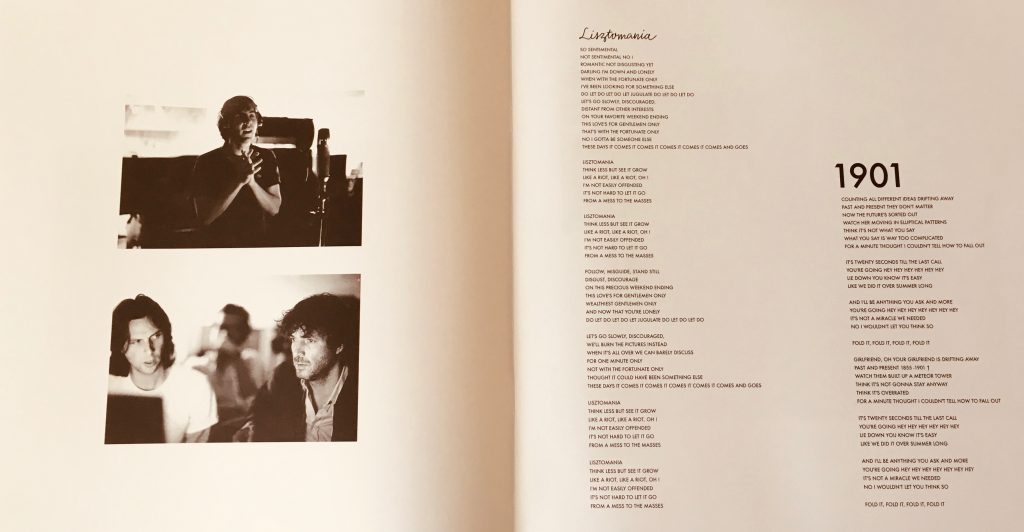 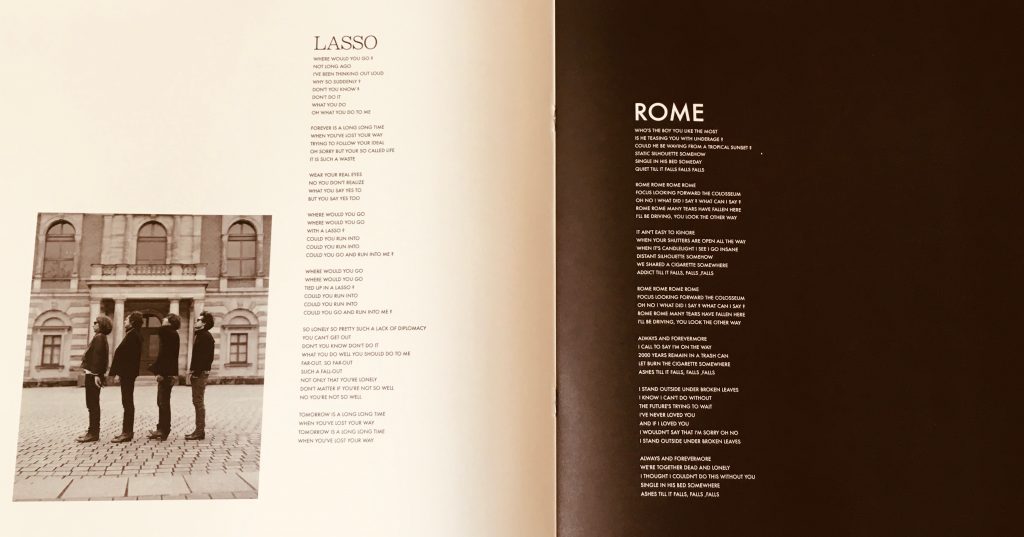 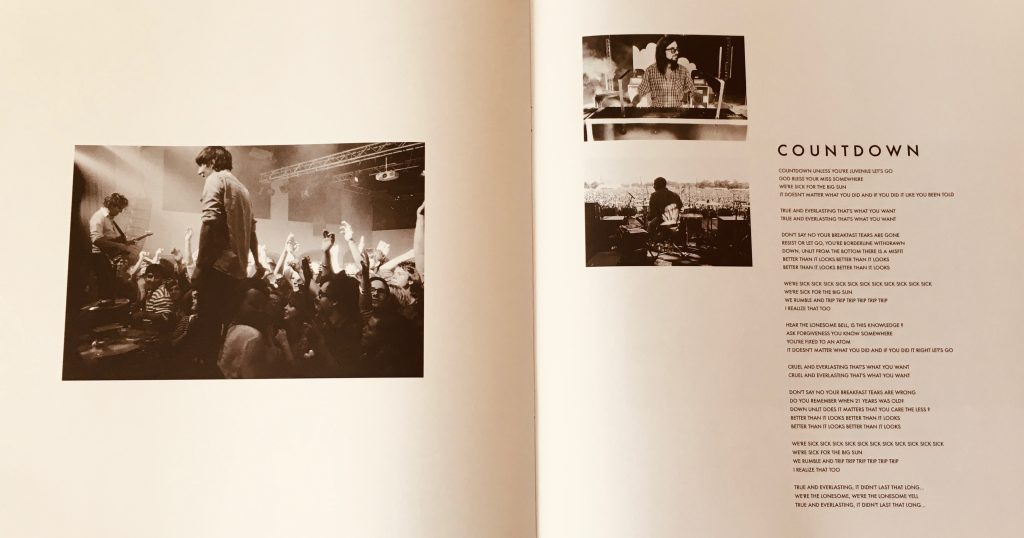 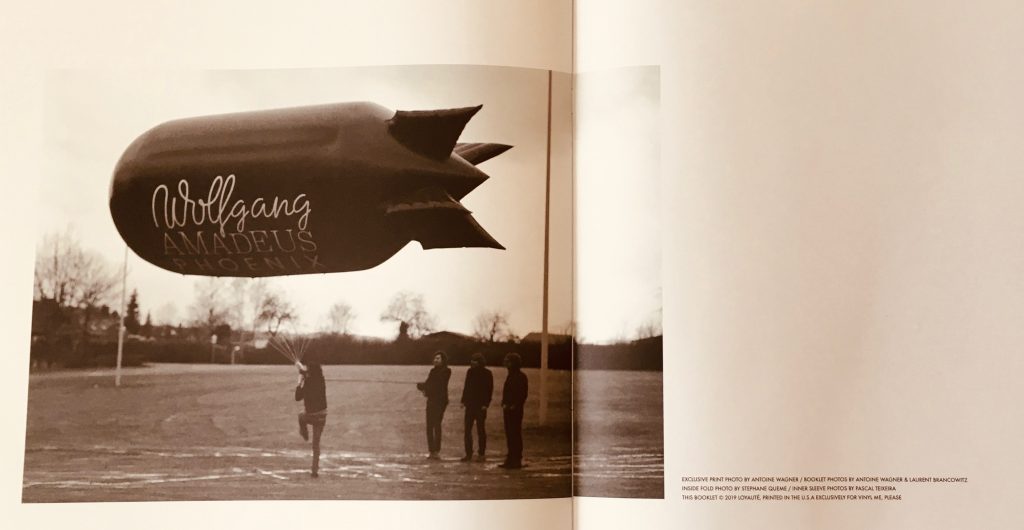 Yes, Mr. Wagner (with a little help from Laurent Brancowitz) is responsible for those pics too.

If all those photos aren’t quite enough to sate you’re appetite for Phoenix pics, there’s more on the album’s inner dust sleeve as well. 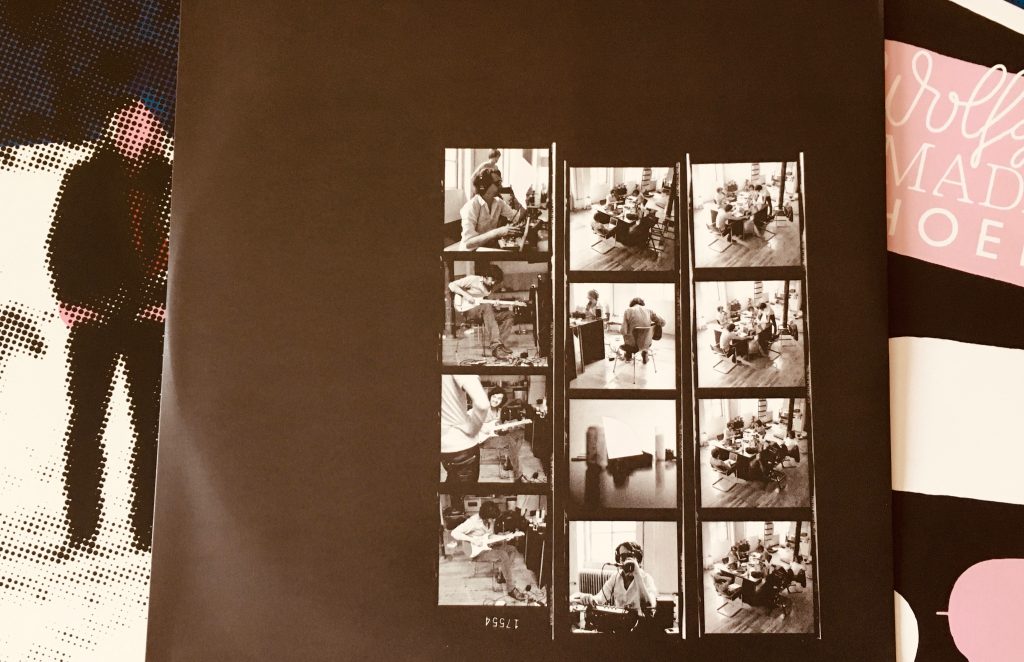 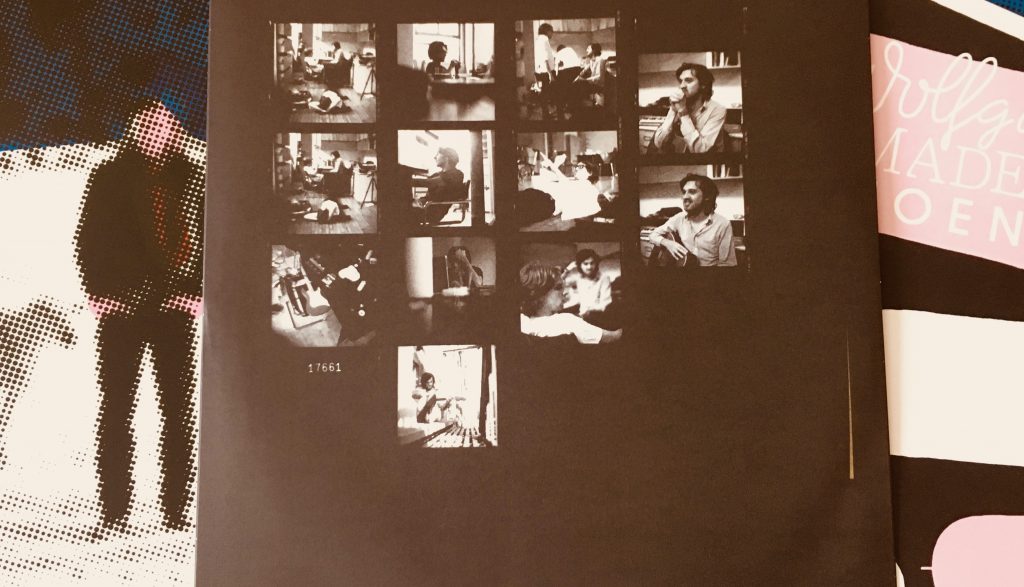 Now, who’s ready to have a butcher’s at that wax already? 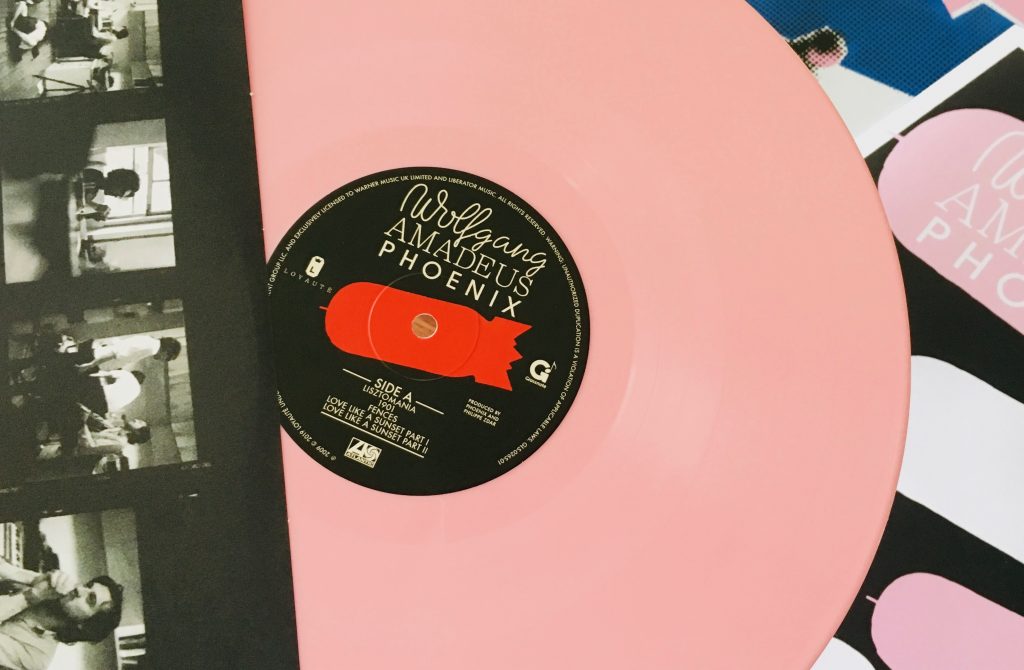 You bet your ass it’s pink. And you’d better believe it’s more than ready to bring some sexy synth ecstasy to your deck. 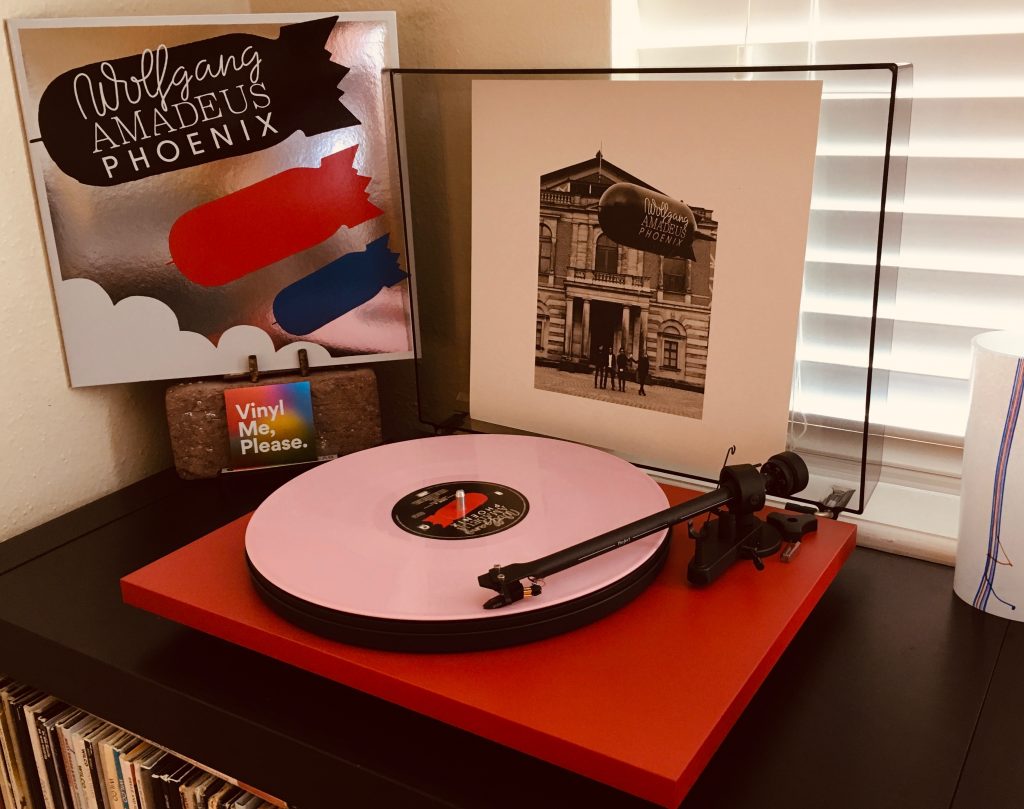 How’s it sound? Like sipping champagne on a late summer’s eve with someone you absolutely adore. As the sun falls below the horizon, you raise your glass to watch the aureate light dance with the rising bubbles, and — even knowing the fleeting nature of such intoxicating moments — you can’t help but smile.

I’ve got another little confession to make before I wrap things up here: I came very, very close to swapping Phoenix’s Wolfgang Amadeus Phoenix for a different record this month. Not because I wasn’t a fan of the album (I’m pretty sure I’ve proved just the opposite to be true), but because some albums seem so attached to a specific time and a specific place that it’s sometimes difficult to appreciate them out of that time and place. Wolfgang Amadeus Phoenix was one of those albums for me (as are many albums from the so-called “garage rock revival” of the early 2000s). To that point, it’s probably been a good five or six years since I sat down and listened to Wolfgang Amadeus Phoenix (or any Phoenix album for that matter).

I’m happy to report that not only does Wolfgang Amadeus Phoenix hold up after a decade, it might actually be more enjoyable now than it was back then. There’s little doubt I ever would’ve found that out if this stunning 10th Anniversary release hadn’t come my way. Thanks to Vinyl Me, Please for giving me a reason to revisit this pop gem from the not so distant past, and for continuing to help music lovers everywhere discover (and rediscover) truly Essential selections from every genre/era under the sun.

A big THANK YOU to our friends at Vinyl Me, Please for sponsoring this subscription. Don’t forget to check out the official Vinyl Me, Please website and sign up to get some choice wax delivered right to your door each and every month! Can’t wait to see what groovy treat they send our way in July! 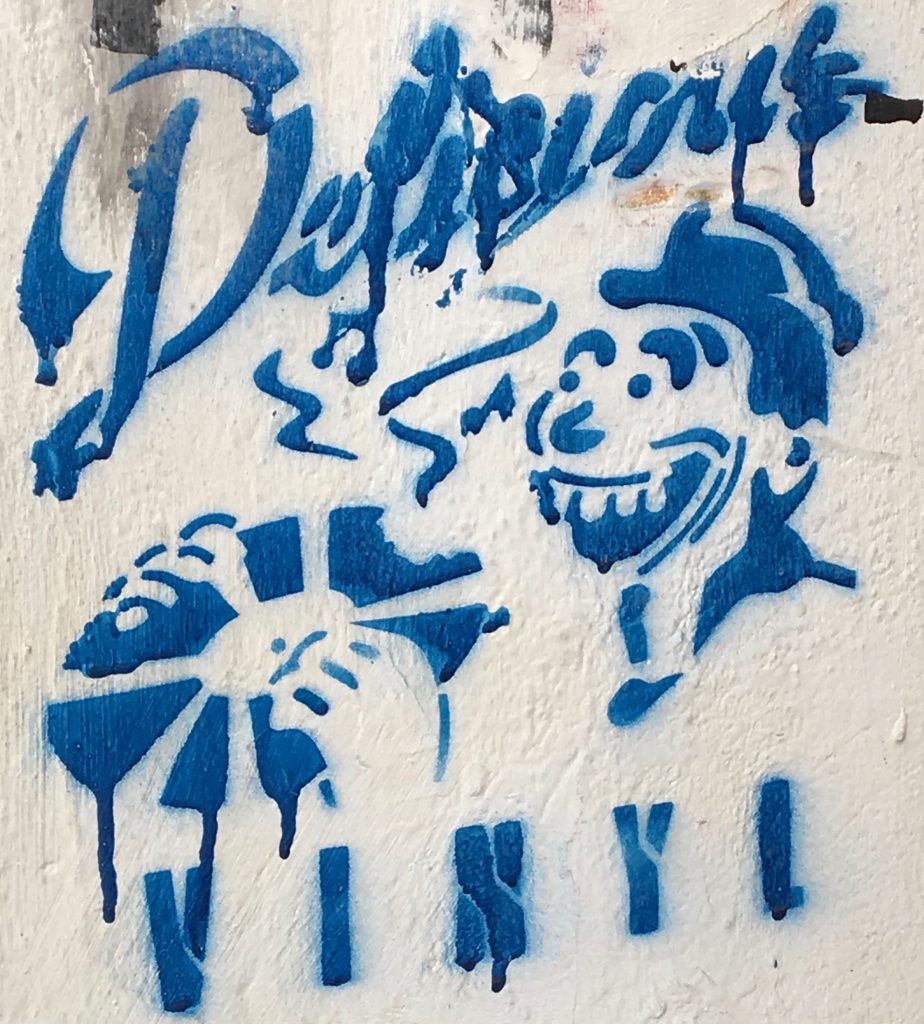 ‘Archer: 1999’ Finally Answers the All-Important Question: Are Eggs Really Good for You?