Ok, the featured $0.99 movie this week is the latest cinematic incarnation of that “steal from the rich and give to the poor” do-gooder Robin Hood. Starring Taron Egerton and Jamie Foxx, this version goes straight up action epic in its re-telling of the well trod tale, and if you’ve seen the film’s ridiculous trailer, then you know exactly why I’d elect to skip this rehash. Luckily, there’s always something interesting in the “Movies You Might’ve Missed” section of iTunes. So …

This week, two crooked, self-entitled cops break seriously bad (and get in way over their heads) in Dragged Across Concrete.

What Are We Doing Here?

When their strong-arm tactics finally land them on suspension, a couple of not so squeaky clean cops decide to buck the system and shake down a bad guy to get what they believe is owed to them. Little do they know, the devious act will draw them into a brutally violent caper that finds them pitted against masked villains, and a pair of low-level criminals with sights on claiming the booty for themselves. Welcome to the nihilist odyssey that is S. Craig Zahler’s Dragged Across Concrete. 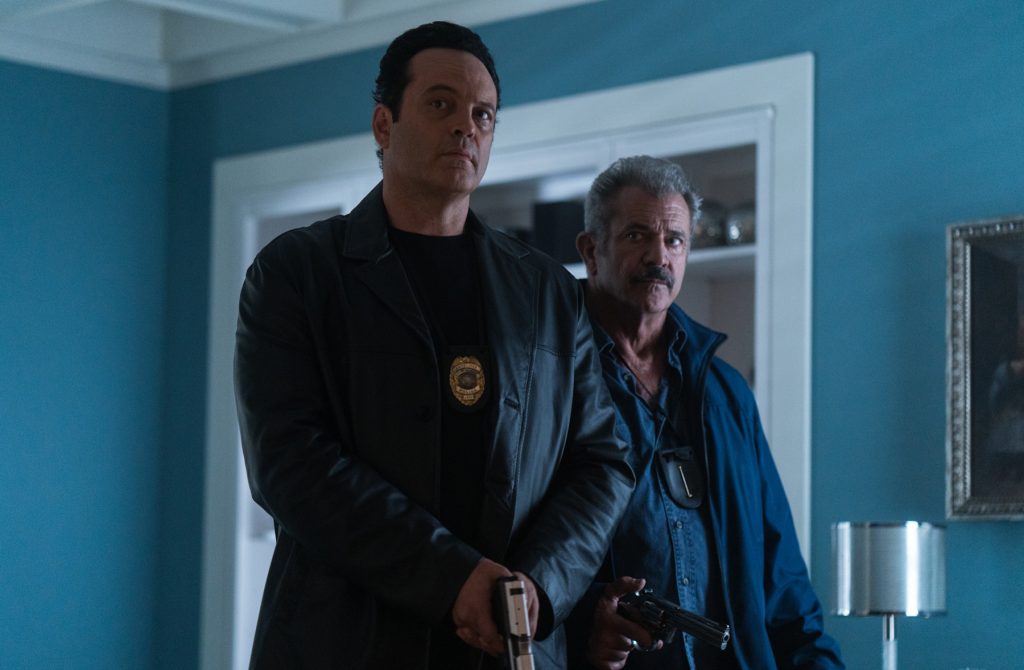 Do Not Prioritize Money Over Having A Heartbeat

Alright, before I say anything else about Dragged Across Concrete, I’ll go ahead and address the big, hairy elephant in the room … the one named Vince Vaughn and Mel Gibson. Ya know, the actors whose very involvement (particularly Gibson) in a movie these days may allude to at least the possibility of, shall we say, certain agendas coming through within a narrative. So let me just say this before moving along, I find my own beliefs generally do not align with Vaughn’s more conservative leanings. And I remain utterly sickened by Gibson’s past (and well-documented) penchant for racist/sexist/anti-semitic hate speech. But I can assure you that Dragged Across Concrete is not at all the right-wing propaganda piece one might anticipate given their involvement.

That being said, if you’re still interested in seeing Dragged Across Concrete in spite of their involvement (and I fully understand if you tap out at the mention of Gibson’s name), you should know heading into the film that Gibson does, in fact, play a racist cop with a very big chip on his shoulder. You should also know that Vaughn’s character offers up some very specific opinions on the press, masculinity in the modern age, and, um, the Martin Luther King Jr. holiday. Rest assured that, even if Zahler’s film never overtly condemns these men or their smarmy, self-entitled world view, Dragged Across Concrete never tries to make heroes or anti-heroes of them, and it certainly never presents their vitriol as a means for propping up any agendas.

Point of fact, if Dragged Across Concrete has any agenda at all, it’s to confront, confound, and offend all who enter its bucolic fray. As the film itself runs for a staggering 160 minutes, Zahler gives himself more than ample opportunity to do just that. And yes, Dragged Across Concrete is rife with casual racism, gruesome acts of violence, tough guy grand standing, and truly vile, self-serving characters. All of which projects the sort of distinctly macho vibe that made the films of Sam Peckinpah so much fun to watch in the ’60s and ’70s. For those of you unfamiliar with Peckinpah’s work, know that it was often difficult to distinguish the good guys from the bad in his work, and quite often there was no distinction whatsoever. 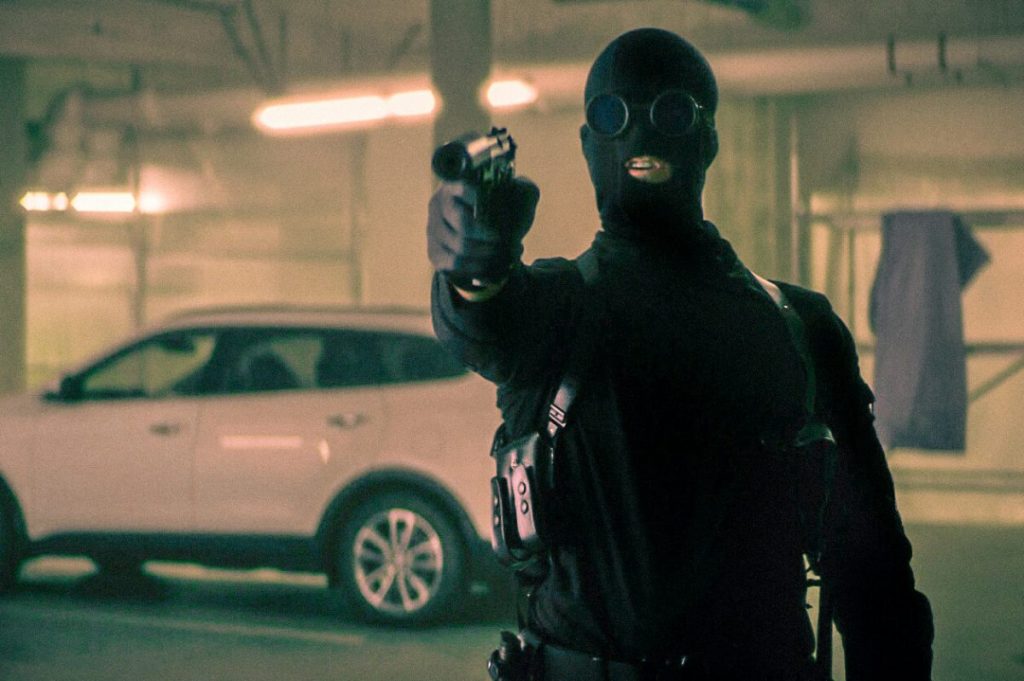 Just FYI – if you find yourself siding with any of the characters in Dragged Across Concrete, we’d encourage you to take a long, close look at your own moral compass, if only because Zahler embraces that Peckinpah theology so wholeheartedly that merely subjecting yourself to Dragged‘s morally ambiguous narrative feels like an act of attrition. The film’s meticulous pacing and complete lack of an original score only bolster that fact. In terms of Zahler’s slow-burning approach to the narrative, he makes it pay with a couple of brilliantly executed (and brutally violent) showdowns throughout. Of the film’s complete lack of a score, Zahler seems to make that choice specifically to prevent himself from leading viewer’s emotional response to the dastardly deeds unfolding before their eyes, thus daring them to do what so many movies refuse to – form their own opinions on each deed as it happens.

Zahler doubles down on that approach with a crackling screenplay that doesn’t let any one of his characters off the hook – i.e. the corrupt cops who unwittingly allow a nasty little heist to unfold in service of a payday are as suspect as the low-level crooks who participated (however passively) in it. In a particularly shrewd bit of scripting, Zahler even aligns the motivations of one of those crooks (played with a compellingly understated zeal by Tory Kittles) with the motivations of Gibson’s bad boy cop. That Zahler manages to make three-dimensional characters out of even the least likable of his troupe only lends to the authenticity of the nihilistic world he presents here.

And make no mistake, stories like this one (i.e. those in the Peckinpah vein), are only as strong as the world in which they unfold. That’s where Zahler really makes something unique of Dragged Across Concrete, presenting a patently unforgiving landscape that – in its stylized, ultra violent hyper-reality – jibes with the grindhouse approach of his previous films (Bone Tomahawk and Brawl In Cell Block 99) while still presenting a world that feels unnervingly close to our current reality. In that, Dragged Across Concrete (love it or hate it, and many of you will hate it) becomes one of the more unmercifully honest looks at modern America to grace cinemas this year. 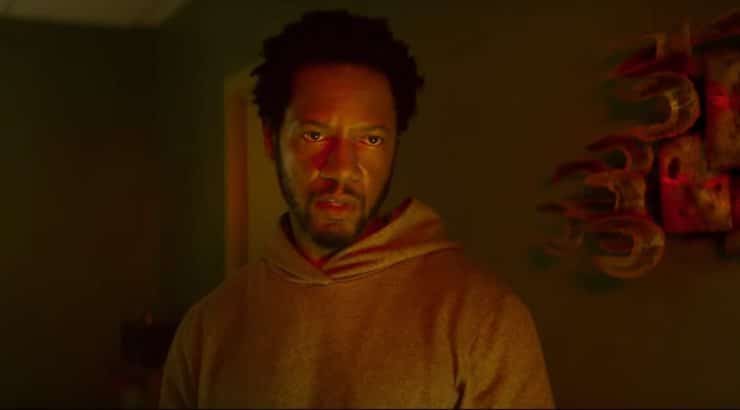 I wasn’t kidding when I said many of you will hate this movie. Hell, if I’m being completely honest, I can tell you that Dragged Across Concrete is simply not the sort of movie one “likes.” It’s ugly, and brutal, and at times shamelessly manipulative … and all of that without the baggage that comes with casting Mel Gibson in a lead role. But it’s also an engrossing, frequently thrilling little crime thriller that – as absolutely infuriating as it can be – is often just as insightful. If that sounds like your bag, then you’ll find lots to engage with in Dragged Across Concrete‘s 160 minute runtime. If not, then you’ll want to avoid this one at all costs.