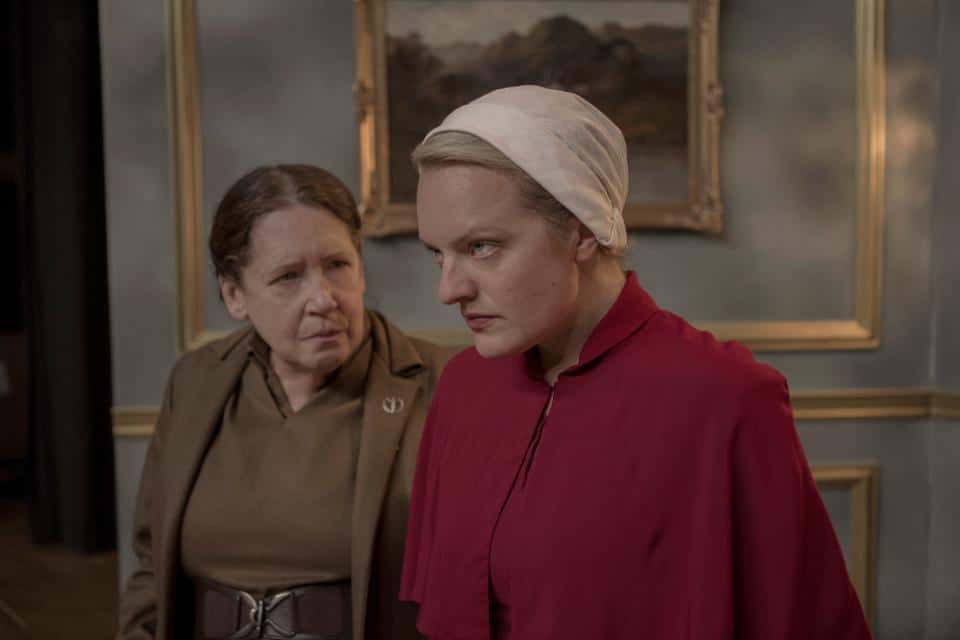 Letting go of someone you love is never easy. But sometimes you just know that, in spite of how painful it’s going to be for you (and maybe for the other person as well), it’s what’s best for both of you. “If you love something, set it free” might seem like a tired platitude, but that doesn’t mean it’s not good advice sometimes.

“Unknown Caller” is the story of two women who are faced with the harsh reality that the ones they love the most would be better off without them. One handles her situation courageously, doing what needs to be done even though she knows how devastating it will be. The other can’t seem to get past her own needs, and her apparent selfishness sets off a chain reaction that could have disastrous repercussions.

Let’s start with the bad. We’ve talked about the fact that Serena Joy Waterford is a complicated character (to say the least). On the one hand, she’s been a willing accomplice in multiple rapes, and she openly supports and benefits from Gilead’s oppressive society as a leader among the commander’s wives.

But the show has done a good job of humanizing her over the last couple of seasons, and there are times when you see her as just another victim of that same oppression. She’s been beaten for daring to disobey her husband, and she’s lost a finger just for reading. Wives may be at the top of the Gilead food chain as far as women are concerned, but that’s not really saying much.

The finger incident seemed to finally push her over the edge, and she allowed Nichole to leave with June because, deep down, she knew that her daughter would be doomed to a life of subservience if she stayed. And the last couple of episodes have led us to believe (or at least hope) that Serena would help lead a rebellion of sorts and give the women a voice. It would be difficult and dangerous, but it could be done.

But there’s one thing Serena wants more than anything else—a baby. For her, being a mother is the ultimate goal. I won’t speculate as to how much of that desire is due to her belief system—there’s nothing wrong with wanting children. But she seems willing to give up any sense of personal agency in order to have them. For whatever reason, she’s okay with (or at least has accepted) that, in order to get the one thing she wants most, she has to give up virtually everything else.

And that’s what makes her story so tragic. Not only has she seemingly abandoned the idea of being a voice for change, but she’s fixated on Nichole to the point that she and her husband are actively petitioning the Canadian government for her return to Gilead. Where once Serena was willing to let Nichole go so the girl could have a better life, she’s now willing to bring Nichole back into a life of second-class citizenship and illiteracy because she can’t stand not being a mommy. I’m not saying Serena doesn’t love Nichole on some level. But I’m not sure she really understands what love is.

I hope I’m wrong. I’d like to think this is Fred’s idea and Serena feels compelled to go along to keep the peace. But I doubt it. She’s had multiple chances to escape Gilead herself and start over. She could do a lot of good as a former Gilead wife to shine a light in its dark corners and show the rest of the world how horrible it is. But, for whatever reason, she’s chosen to stay and play along so she can have her baby. Maybe it’s genuine belief. Maybe it’s just a case of good old-fashioned brainwashing. Maybe it’s a little of both. But, at the end of the day, she’s putting the baby she claims she loves in an awful situation.

And then there’s June. There’s no question that she truly loves Luke; we’ve been shown this over and over again. And there’s a part of her that wants nothing more than to be back in his arms enjoying the life they had before all this started.

But that life doesn’t exist anymore, and she knows it never will. She’s had multiple chances to get out, but she’s chosen to stay because of the other person she loves just as much as Luke, if not more—Hannah. And as long as Hannah’s stuck in Gilead, June can’t leave.

And she’s made choices. For the record, I don’t fault her for her relationship with Nick. Is it adultery? In the strictest sense of the word, yes. But you can’t judge a person until you’ve walked a mile in their shoes, and June’s done what she’s had to do to survive. And that includes finding love in a place where love is in very short supply.

Should she have told Luke about Nick? I’m not sure about that one. I think she could have ended the marriage without that detail, but, again, I’m not in a position to judge. She wants Luke to know that Nichole (Holly) is the product of love and not sexual assault. To her, that’s important even if it’s understandably difficult for Luke to hear.

At the end of the day, however, June does what Serena is unwilling to do—she lets the person she loves go because she knows it’s what’s best for him (and for her, really). We’ve already seen how, even when someone escapes the horrors of Gilead, their relationships are never truly the same. She’s a different person now, and she needs to move on, but so does he. Come to think of it, maybe she knows it will be easier for him to let go if he knows she’s found someone else. That actually takes even more courage.

It won’t be easy for Luke, but hopefully now he can grieve and move forward. He and Nichole are safe (at least for now), and he has Moira to lean on. Let’s just hope the Waterfords don’t cause any more trouble (but we know they will).