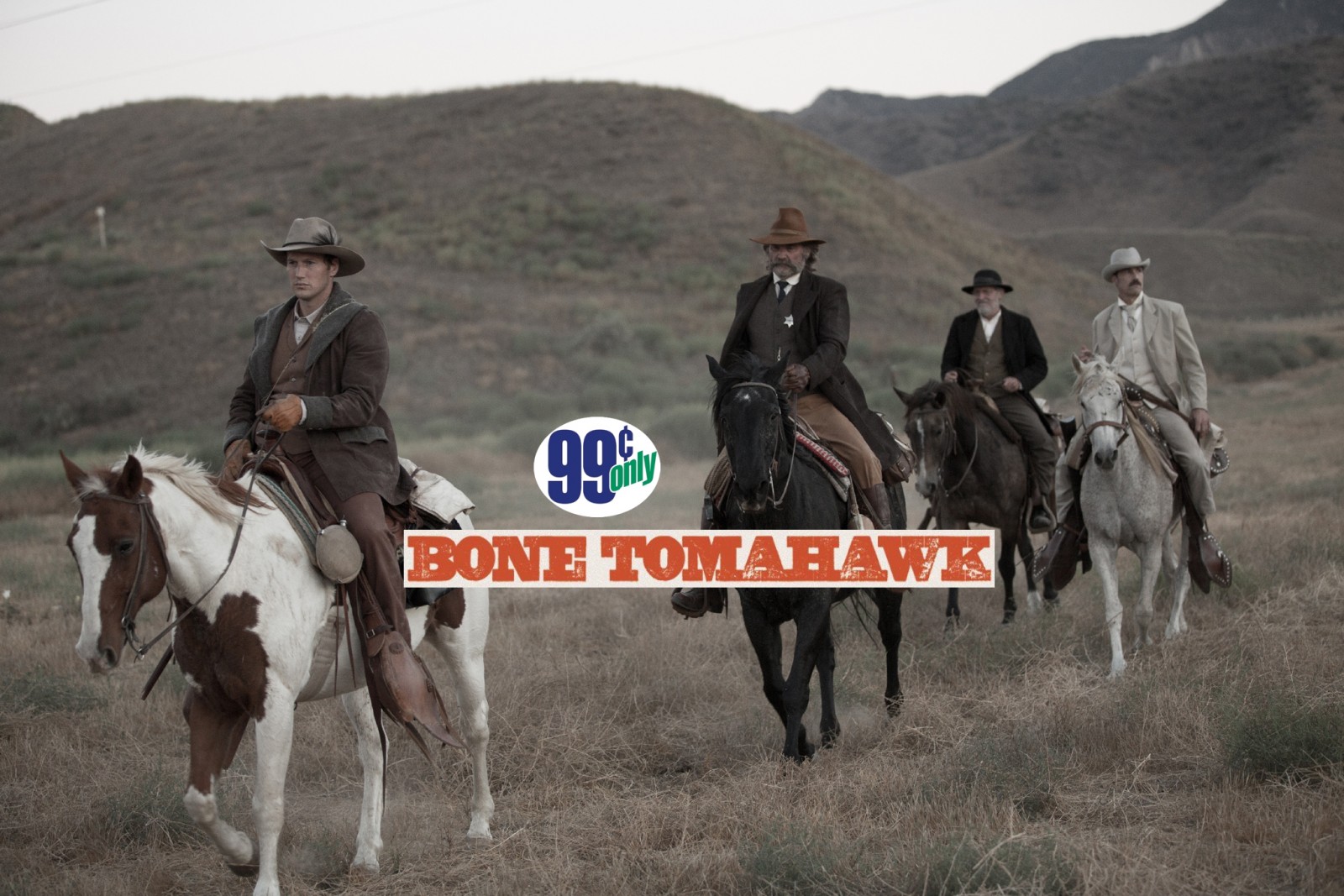 This week, iTunes saunters through a bloody, brutal tale of frontier life with Bone Tomahawk.

I Know the World’s Supposed to Be Round, but I’m Not So Sure About This Part

When outlaw drifter Buddy (David Arquette) wanders into the one-horse town of Bright Hope, he’s promptly shot in the leg by the town’s Sheriff (Kurt Russell) and thrown in jail. Unbeknownst to all, Buddy is being tracked by an unnamed darkness with a score to settle. In the black of night, Buddy is sprung from prison and spirited away to face an unknown fate. In the process, Buddy’s captors take the town’s doctor (Lili Simmons) and Sheriff’s Deputy hostage. Sheriff Hunt, waking to find the mutilated body of a local stable boy, an empty jailhouse, and a bone-tipped arrow lodged in his prisoner’s place, pieces together a search and rescue party for the captives. Undeterred by sinister warnings regarding the ‘savage’ kidnappers, the doctor’s husband (Patrick Wilson), the town’s ‘backup’ Deputy (Richard Jenkins) and a local gun-hand (Matthew Fox) set out on a rescue mission that leads them straight into the black heart of the unforgiving desert.

If that setup sounds familiar, it should. It’s the basic construct of John Ford’s The Searchers (1956) and dozens of other westerns that graced screens big and small since. Luckily, Bone Tomahawk Writer/Director S. Craig Zahler has no intention of merely retreading old dusty trails. Crafting a bleak, slow-burn western, Zahler blends a simmering layer of horror throughout the film’s narrative. As his searchers saunter ever deeper into the desert, Zahler ratchets up the horror and the brutality. In the process, Bone Tomahawk becomes one hell of a gruesome genre-mashup and one mesmerizing experiment in western cinema.

Well, He’s Got a Chance

Over the years, I’ve grown wary of the term genre-mashup. Recent stinkers like Cowboys & Aliens (2011) are largely responsible for that. While Bone Tomahawk is far from a flawless mashup, it still manages to get key elements of both western and horror cinema right. That has a lot to do with pacing. And Zahler paces the first half of his film with the all the determination of a snail. For the most part, his gamble pays off. Though it drags on a bit too long – especially given the film’s 132 minute run-time – the exacting, unnervingly quiet intro lends an ominous tone to the film. It also feels like an honest representation of life slowly unraveling on the plains.

To that effect, Zahler utilizes the eerie calm of the film’s opening moments to establish the plain-spoken nature of his central characters. It’s a clever mix of personalities with God-fearing lawmen and a simple minded do-gooder joining up with a moral-less gunslinger. Faced with the singularly daunting task of tracking and rescuing their friends from a ferocious, indigenous raiding party, words are not to be wasted. As blistering hot days are swallowed up by pitch-black nights, ravenous wolves and villainous men linger ever in the darkness. All the while a treacherous howling reigns over the land. Ponderous thoughts are spoken, unthinkable challenges arise, difficult questions are asked, and simple answers are given.

That Zahler’s characters never feel dumb or even cliché can be attributed to the commitment of the actors playing them. With strong performances from a strident Wilson and a near-emotionless Matthew Fox, the crew is led by another taut, late-stage performance from Russell. Stoic, stubborn, and fiercely intelligent, his Sheriff Hunt is everything you’d expect an old lawman to be. But there’s a warmth underneath his grizzled facade that lends a disarming sense of humanity to the character. Hunt is not the sort of person to do what’s right just because it’s expected. He does it because he really believes he should. Still, it’s Richard Jenkins’ (that most egregious of scene-stealers) rambling, motor-mouthed ‘backup’ deputy that puts that sentiment into words. As the rescue party is about to set out on the trail to recover their people, it’s Jenkins’ character that sums their reasoning up by stating simply, ‘Some good people are in trouble, and we have to go help them.’

And wow, do things get interesting once they hit the trails. Travailing the barren landscape and majestic valleys of the plains, Sheriff & Co. find an unrelenting world where action must be reflex, morals can get you killed and things can always get worse. That last point proven when the group finally reaches their loathsome destination. I’ll say no more about the unsettling nature of that destination, but that it’s not for the faint of heart. As Bone Tomahawk closes in on its heart of darkness, Zahler captures some of the most brutal imagery I’ve ever seen in a film. And he captures it with the detached indifference of those perpetrating the grisly acts. In these moments, Zahler’s film transcends western and horror tropes to become a deeply disturbing look at the nature of humanity and the cost of survival.

You bet it is. With titles like Slow West, The Revenant, and The Hateful Eight gracing cinemas and confounding expectations, 2015 was a particularly interesting year for the western. Bone Tomahawk more than earns its place along side those films and should not be overlooked. Sure, it’s a little too long. And it’s a little too slow at times, but I’ve never seen a film quite like Bone Tomahawk. Drop that dollar this week and take a wild ride on one of the weirdest western films ever produced. But be warned, there are scenes in this film that many of you will not be able to watch. Cover your eyes if you need to – and maybe your ears – but see this film. And just be glad that you didn’t have to live it.