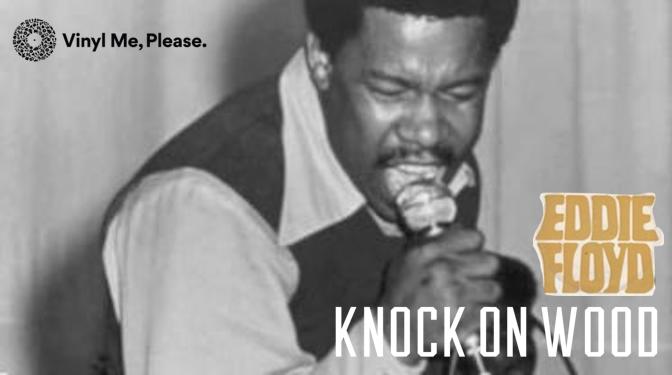 Here’s how it works. You send Vinyl Me, Please some of your hard-earned money (plans start at $27/month) and they send you one meticulously selected album worthy of your time and attention. Easy, right? Each custom pressing (often on colored vinyl!) also comes with special features like original artwork and even a recipe for a companion cocktail. You’ll have membership privileges in the VMP shop, which means you can grab a copy of previous VMP selections from the archives – including November’s lavish reissue of Queen’s landmark album A Night At The Opera – not to mention a bevy of rare and exclusive releases. The store is now open. It’s chock full of sexy new discs that need a loving home. And Team VMP are dropping fresh new selections to their stock every single week. Do not miss out.

Whatever styles or artists or limited edition pressings you’re looking for, you’re bound to find something in the VMP Store. While the store is open to the public, many of the more covet-worthy selections are only available to members, so you’ve gotta sign up to get your mitts on them. If you’re peckish about relinquishing control of your record collection over to complete strangers, know that VMP’s Swaps Program is in full effect. That means you can flip any VMP pick you don’t like for a past AOM (or other VMP Exclusive pressings) that’s a little more your speed. My advice? Don’t overthink it. Do yourself a favor and sign up today.

So, what’s in December’s box? Nothing short of an unmitigated Stax Records classic in Eddie Floyd’s Knock On Wood.

Also, Vinyl Me, Please had themselves a little member’s appreciation sale in November that went so well it actually crashed the site for the better part of a full day. Luckily, once the site was back up and running I still managed to score exclusive pressings of Johnny Griffin’s jazztastic A Blowing Session, and Ofege’s marvelously psychedelic, afro-funk rocker Try And Love. Did I mention that there’s all kinds of goodies in the VMP store? Well, there’s less after that sale, but it’s still stocked to the gills with killer releases.

For the Love of Music, Please DO NOT BEND (or, how I learned that the best way to up your Stax Records game is to get on the VMP Classics train)

Ok, you may or may not realize that Eddie Floyd’s Knock On Wood is not the Vinyl Me, Please Essentials pick for December. That honor actually went another Stax Legend in Mavis Staples, who’s solo debut release got a much-needed reissue via Team VMP for Christmas. Now, if you’re wondering what the hell is wrong with me for swapping out one killer Stax release for another, let me say first that I absolutely adore Mavis Staples, but I tend to gravitate more towards her within The Staple Singers. Let me say as well that I do like a lot of Mrs. Staples’ work as a solo artist, but her eponymous debut is not the Mavis solo album that I felt merited a spot in my collection.

That’s ok, because Vinyl Me, Please has re-released a bevy of Stax releases through their Classics subscription over the past couple of years, and thanks to VMP’s ridiculously kick ass Swaps Program, I got to get down and dirty with another Stax staple in Floyd’s Knock On Wood instead.

Before we go any further, I’m gonna take a moment to lay a little history on you, ’cause if you don’t know anything about Stax Records, it’s a name (and legacy) you need to be aware of. For the sake of time, I’ll go with an abridged version of Stax history. The label was founded (under the name of Satellite Records) as a country/rockabilly label in Memphis, Tennessee in the late 1950s, shifted to soul/R&B in the ’60s, and became one of the most important record labels in music history. One that recorded and/or released hit records from soul icons like Otis Redding, Carla Thomas, Rufus Thomas (father of Carla), Booker T. & The M.G.’s (also the Stax house band), The Bar-Kays, Wilson Pickett, Isaac Hayes, Aretha Franklin, Wendy Rene, William Bell, Sam & Dave, The Staple Singers, Albert King, Johnnie Taylor, Little Milton, and more … including Mr. Eddie Floyd.

If you recognized some of the names in that list, then you know just how many hit singles came and went through Stax throughout the ’60s and ’70s. You should know that few of those iconic names had a bigger hit than Eddie Floyd, who’s “Knock On Wood” (co-written with M.G. guitarist Steve Cropper) would become a #1 hit on the soul charts in 1966. You should also know that (even though he co-wrote the song) “Knock On Wood” was not written with Floyd’s talents in mind.

In fact, Floyd – who’d had a few hits with the Detroit-based vocal outfit The Falcons – had all but given up his career as a singer, and travelled to Memphis at Carla Thomas’ behest to join the Stax team solely as a songwriter. He’d worked out “Knock On Wood” in a fevered writing session with Cropper at the now infamous Lorraine Motel in hopes of it becoming a hit single for Otis Redding. He even went so far as to record a demo with The M.G.s so the Stax Brass could hear the song as it should be. And hear it they did … though they didn’t like the song so much for Redding, opting to release Floyd’s demo version as a single instead, and finding themselves with an unexpected hit big enough to pivot Floyd’s career back around to performing.

In the decades since Floyd released “Knock On Wood,” it’s been covered by everyone from Count Basie to David Bowie, and yes, even Otis Redding eventually recorded his own version of it. Over the years, it’s also remained one of the most beloved songs in the incomparable Stax catalogue. Still, nobody has ever performed “Knock On Wood” with the same verve as Floyd. As an album opener, a single like “Knock On Wood” is almost too much of a good thing – a song so strong that it could eclipse every song that plays after it. With a savvy blend of carefully selected covers (“But It’s Alright,” “I Stand Accused,” “634-5789”), and rollicking, soulful originals (“Raise Your Hand,”Got To Make A Comeback”), Knock On Wood somehow manages to get better after that iconic opener.

That doesn’t just make Knock On Wood one of the best releases in the vaunted Stax oeuvre, it makes it (arguably) one of the best soul records ever released. And yes, the Soul/R&B section of your record collection is tragically incomplete without it.

I’m usually pretty good about inferring some sort of meaning (for right or wrong) behind an album’s cover art and all, but I’ve got not one single clue as to why Eddie Floyd is chopping down a tree on this one. Apparently Deanie Catron had a better idea about it, so if you’re looking for some extra meaning, take a quick read of Deanie’s words on the back of the sleeve.

Now, before we tear that shrink-wrap off of the album, let’s take a second to absorb the all important info on this little sticker. Exclusive pressing of an all but impossible album to find? Check. 180g reissue? Check. Heavyweight Tip-on sleeve? Check. Exclusive listening notes? Check. All the makings of another killer VMP Classics release.

Be sure to absorb that Stax Records logo, and of course the foil-stamped Vinyl Me, Please seal of approval marking Eddied Floyd’s Knock On Wood a legit classic.

Now, once you’ve got that pesky shrink-wrap out-of-the-way, take note of this VMP specially designed OBI strip that’ll tell you the album and artist names, and the VMP catalogue number of this release – not to mention a few words on why the album made the cut as a VMP Classic.

Ok, so if there’s one little drawback about swapping your VMP Essentials record for a Classics release, it’s that you don’t get the killer, original artwork and companion cocktail recipe that accompanies the Essentials. It’s a little bit of a bummer for sure, but if you’re a true vinyl collector, those are simply additional luxuries that you can make do without, because: a) the album’s cover is artwork in and of itself, and b) if you like to enjoy an adult beverage while spinning a sexy slab of Stax Records wax, well, there’s really nothing stopping you. Might I suggest something in a single malt on the rocks?

Now, the totally awesome thing about going with a Classics release is that you get a kick ass little booklet containing Exclusive Listening Notes chock full of intriguing tidbits about each month’s album and the artist(s) who recorded it. Which is the very definition of cool. This month’s booklet comes courtesy of VMP’s in-house Stax Records guru Andrew Winistorfer. 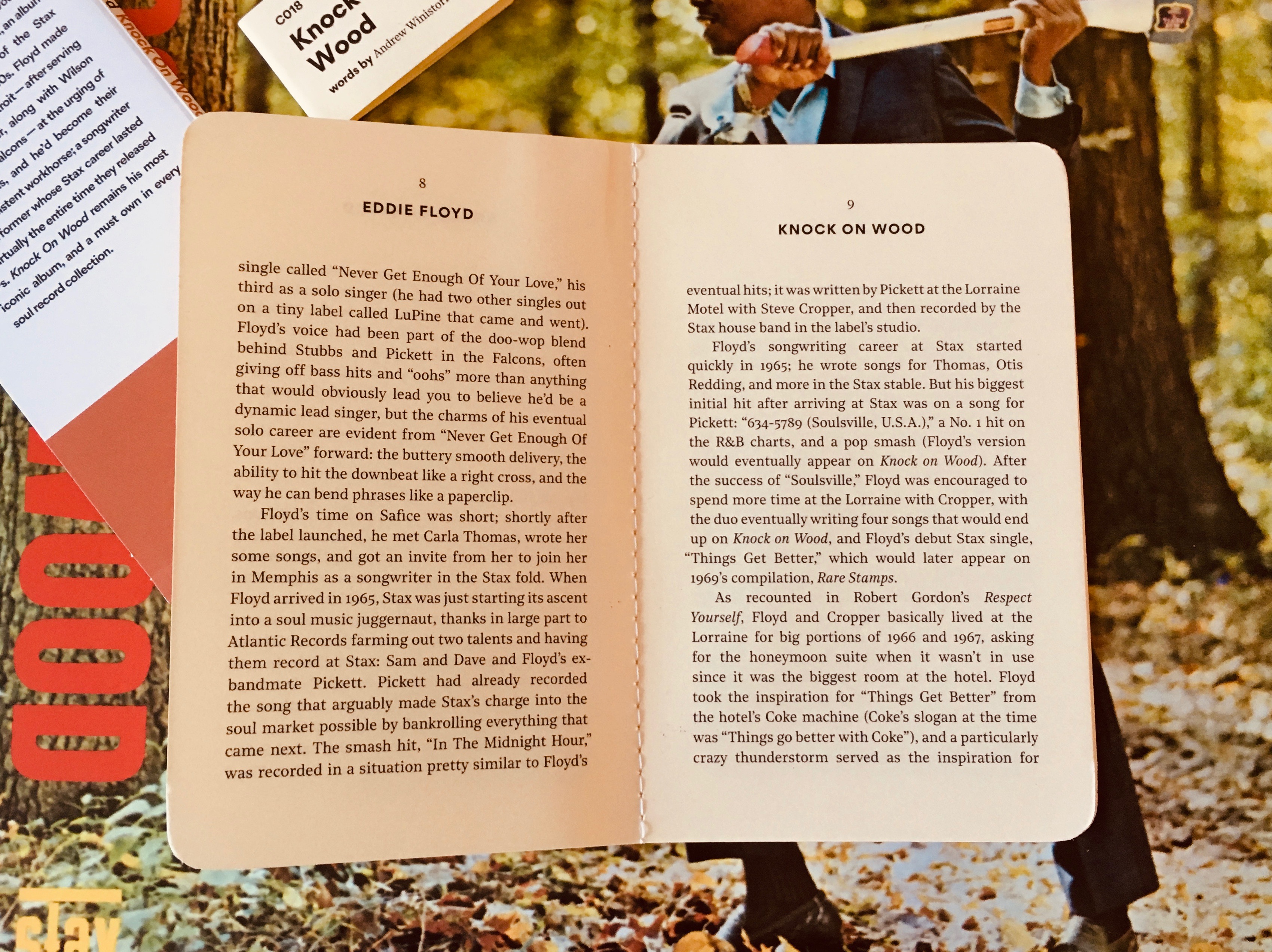 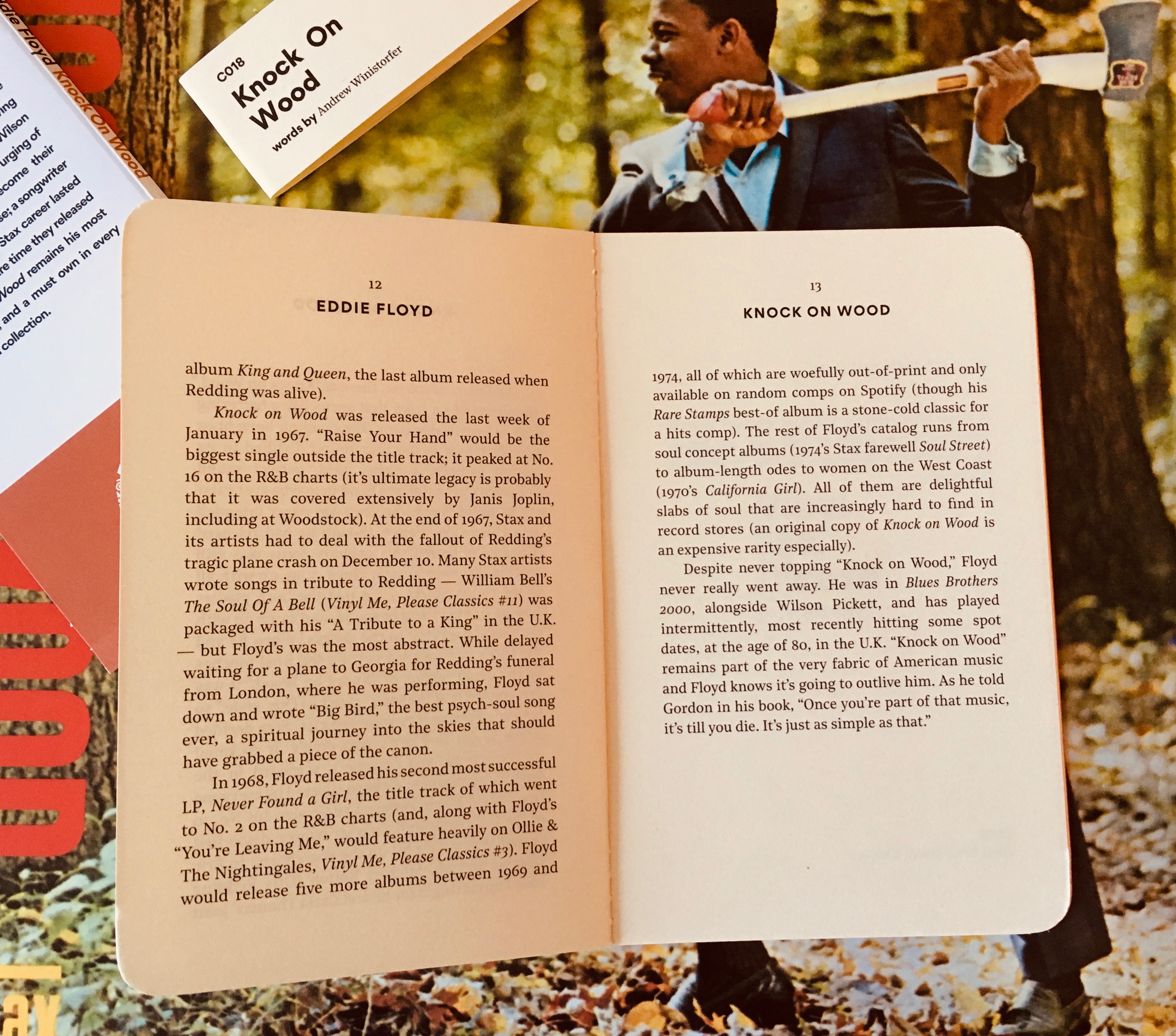 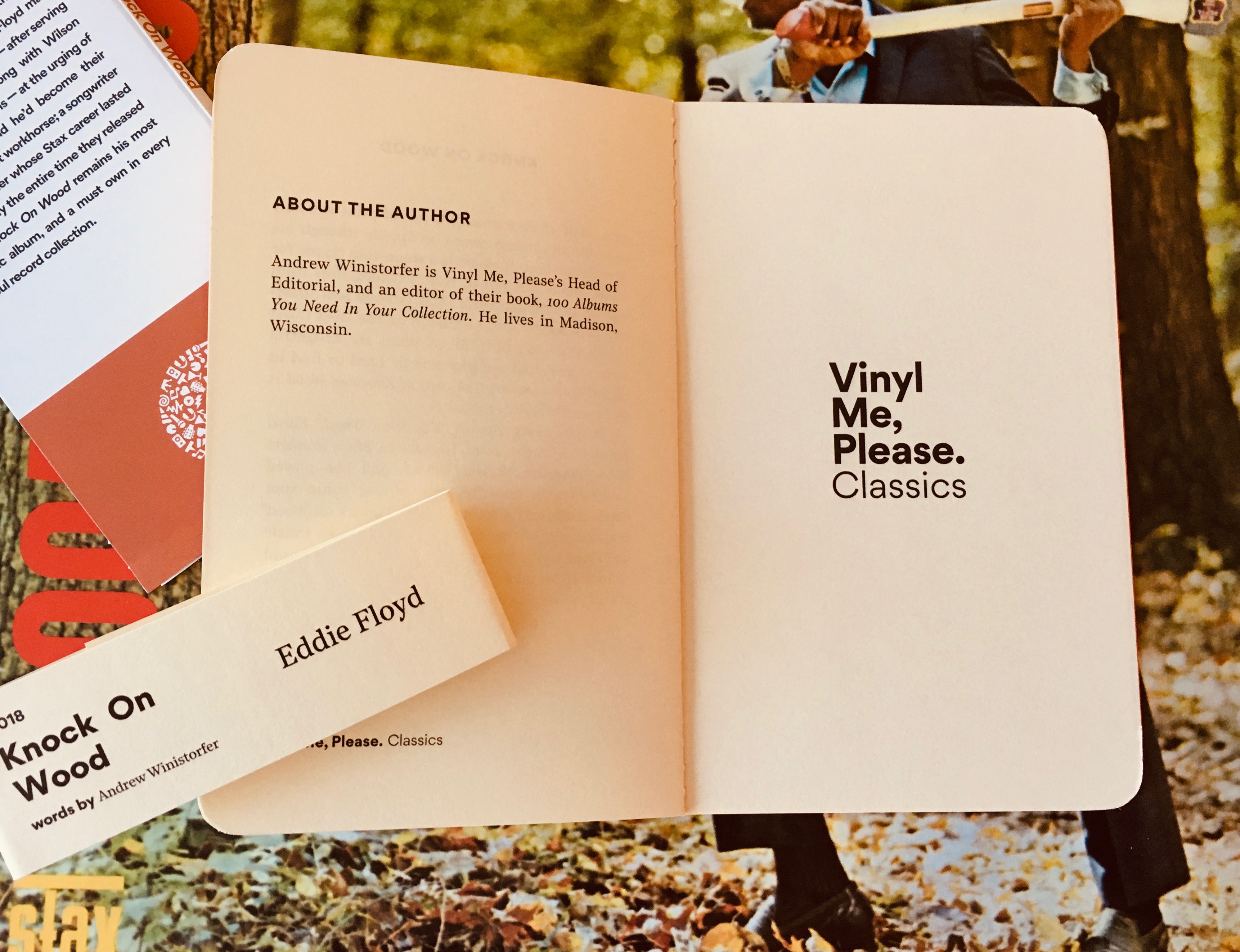 After you’ve finished that absolutely essential little reading assignment, we can finally have a look at the 180g gem inside that Tip-on jacket. And nothing quite says Stax Records like a sleek, black slab of soul-fueled wax. 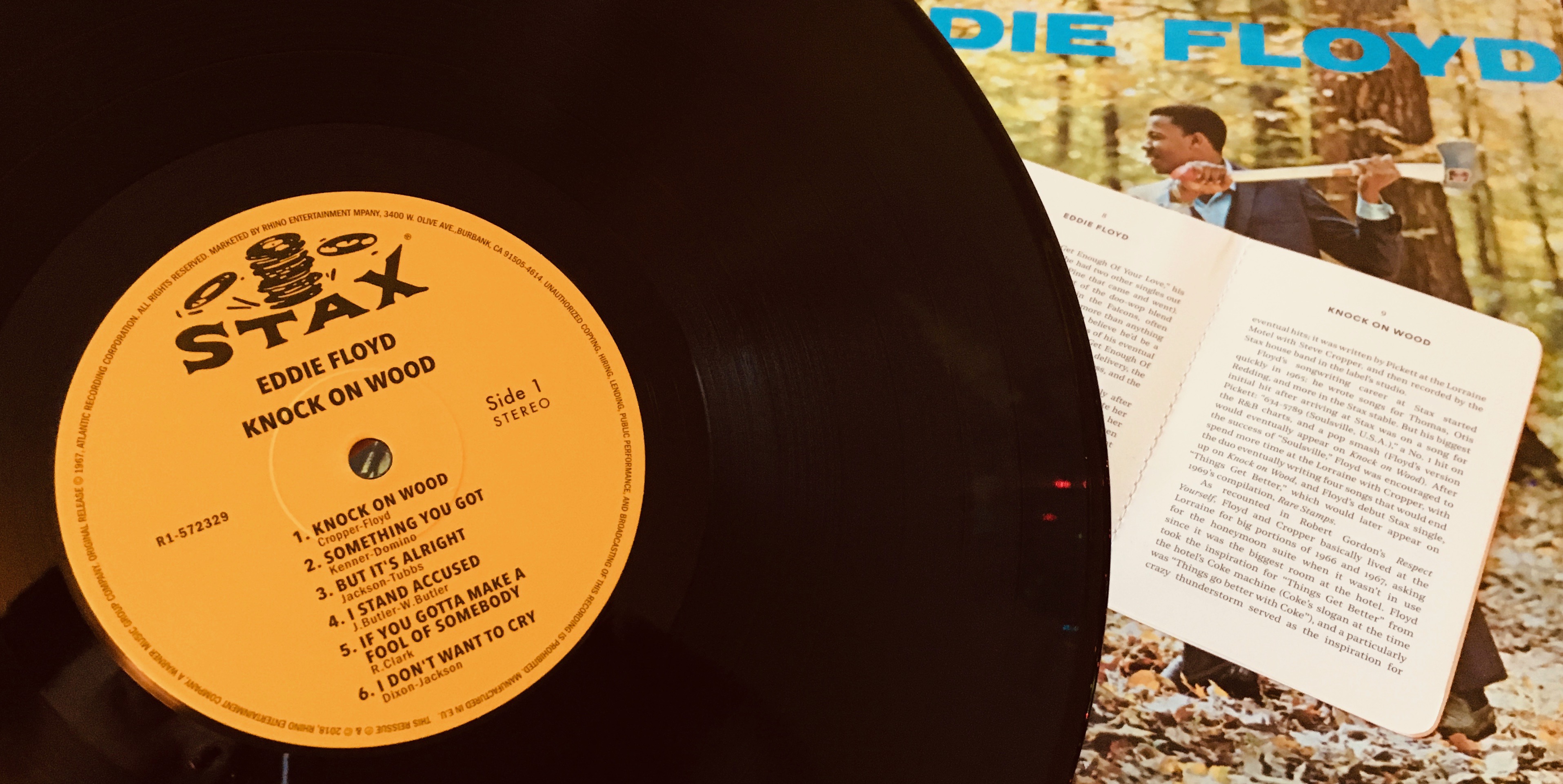 Except, of course, for that classic Stax Records label. 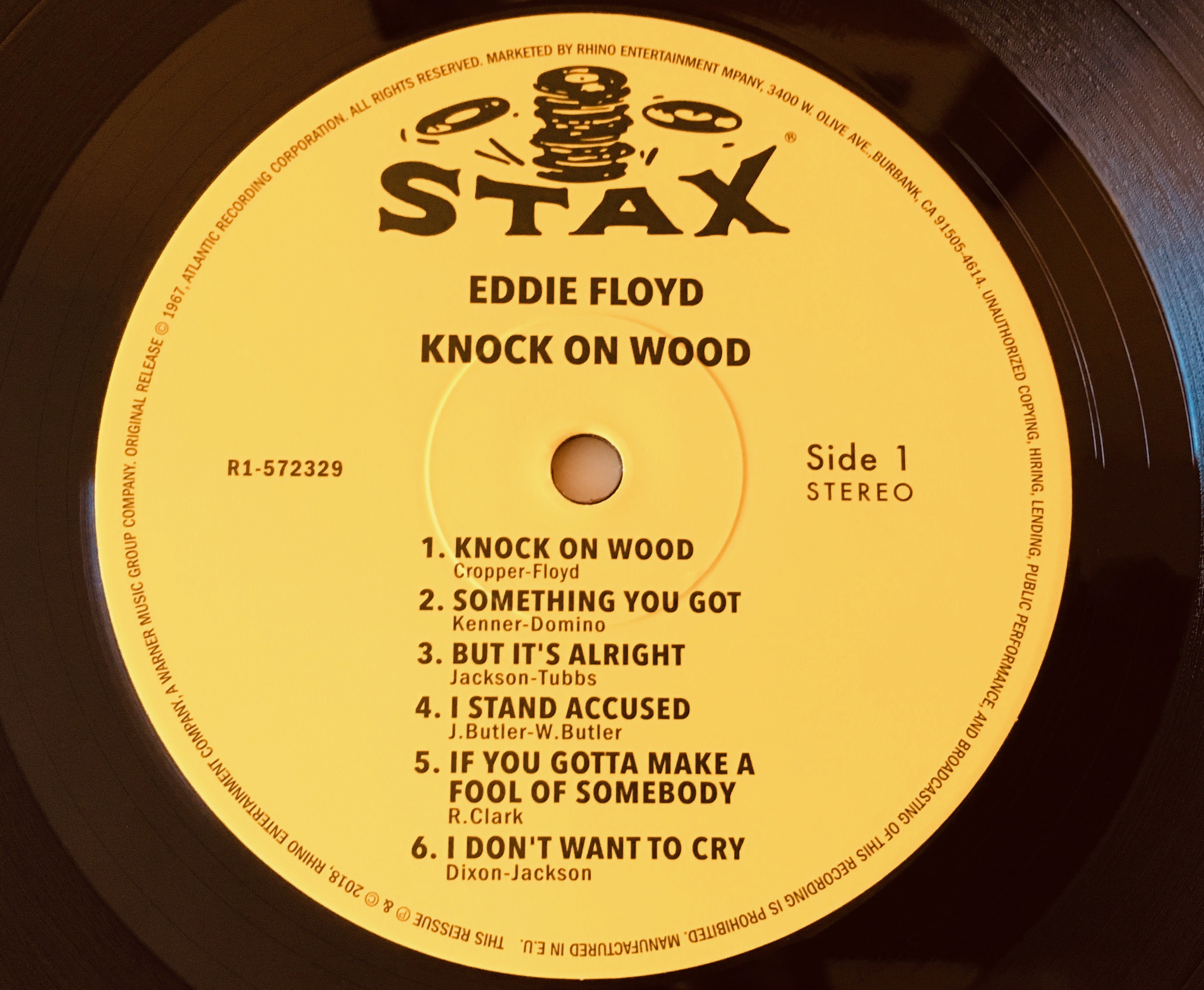 Which is cool, ’cause nothing should distract you from getting down to the stone-cold jams contained in those deep, dark grooves. 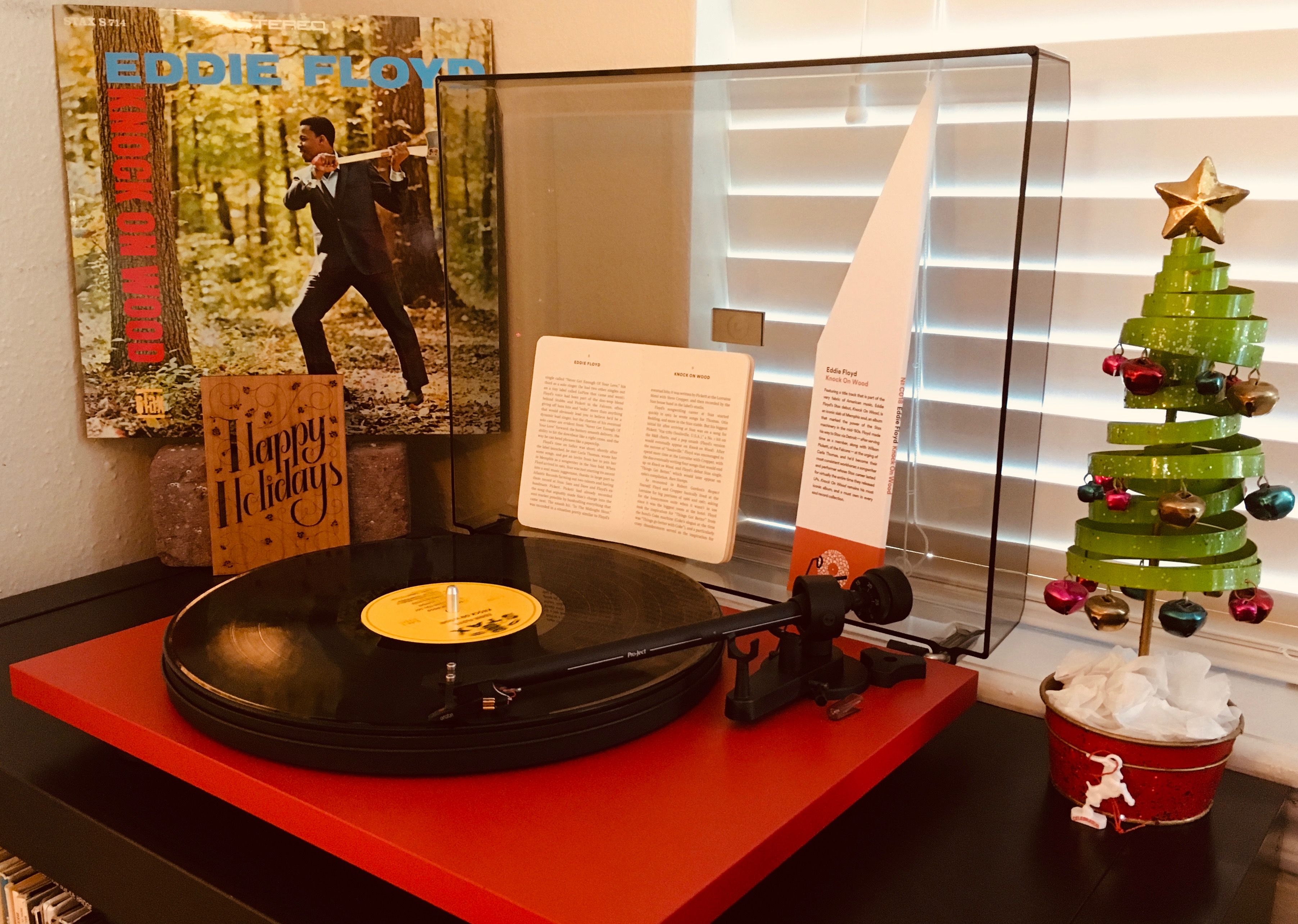 How’s it sound? Fierce, and filthy, and soulful, and sweaty, and sexy, and silly, and anguished, and elated, and tender, and tawdry, and built as much for dancing as it is despairing … which is exactly how a Stax Records release should sound.

Ok, I may one day regret swapping December’s Essentials pick for a Classics selection. Mavis Staples is, after all, a true icon of soul music, and a bonafide Stax Records legend in her own right. Her solo debut is about as classic Stax as it gets, but Eddie Floyd’s Knock On Wood is the very definition of Essential for my own, personal collection. All that means is that, as of this writing, I’m in Stax soul heaven, though I probably would’ve been with either VMP selection this month. So, as I once again acknowledge that one man’s Classic is another man’s Essential, I’d like to thank Team Vinyl Me, Please for helping me hear this Stax Records classic the way it was intended, and for making every month another musical adventure.

A big THANK YOU to our friends at Vinyl Me, Please for sponsoring this subscription. Don’t forget to check out the official Vinyl Me, Please website and sign up to get some choice wax delivered right to your door each and every month! Can’t wait to see what crunchy treats they send our way in 2019!