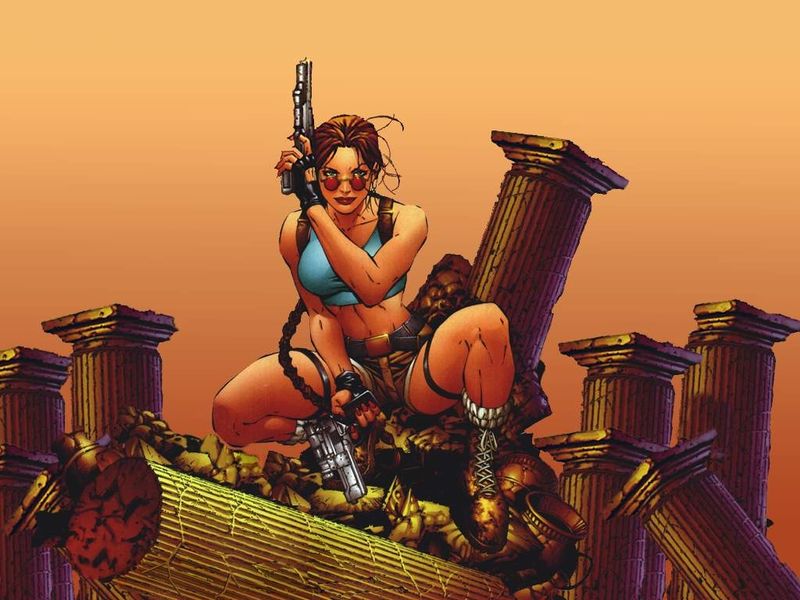 A few months ago, we honored the announcement of 2015’s Rise of the Tomb Raider, the newest entry in the popular Tomb Raider series, with a complete list of series star Lara Croft’s previous adventures. But the tomb raiding doesn’t stop there. In addition to the nine main titles are numerous spin-offs and tie-in installments, including PC add-ons, original novels, and even an anime series. Hardcore fans who can’t complete a Tomb Raider game without finding every single secret, artifact, and relic won’t be able to pass up these hidden gems.

In 1999, Lara leaped from the TV screen to the art panel when Top Cow Productions began publication of the Tomb Raider comic book series. The series, which ran until its final issue in 2005, spans fifty issues and features a variety of original story arcs, including a “Witchblade” crossover. Following the series’s finale, Top Cow released Tomb Raider: Compendium, a complete volume of all fifty issues. Bandai Entertainment also released a tankobon version of series in five smaller, black-and-white volumes. Lara would not grace the funnies again until 2013, when Tomb Raider: the Beginning—the official prequel to 2013’s Tomb Raider reboot—hit stores as a bonus item included with pre-ordered copies of the game. It spawned a new series of Tomb Raider comics (published by Dark Horse Books) that follow the 2013 reboot.

So much popularity did Ms. Croft and Tomb Raider garner that Hollywood saw fit to give them their own major motion picture. That motion picture was director Simon West’s 2001 Lara Croft: Tomb Raider. The film starred Angelina Jolie as Lady Croft herself (who better, honestly?), Jolie’s real-life father Jon Voight as Lara’s father Lord Richard Croft, pre-James Bond Daniel Craig as her sometimes-rival/sometimes-boyfriend Alex West, and Iain Glen (a.k.a Ser Jorah Mormont from “Game of Thrones”) as the film’s villain Manfred Powell. The film wasn’t exactly a masterpiece or anything, but it was at least fun and exciting as any Croft adventure should be. The same can be said of its 2003 sequel, director Jan de Bont’s Lara Croft: Tomb Raider: the Cradle of Life, which saw Jolie reprise her role as Lara. The sequel also introduced Gerard Butler into the franchise as Lara’s jailed mercenary ex, Terry Sheridan. Sadly, the film didn’t do well enough to inspire a third Croft film (although rumor has it that a new Tomb Raider film that has no ties to the first two is in the works—fingers crossed!).

It goes without saying that a character as well-read as Lady Croft should star in her own string of novels. The first of these novels, Mike Resnick’s the Amulet of Power, followed Lara through the Middle East and Egypt as she pursued the Amulet of Mareish; the second, E. E. Knight’s the Lost Cult,saw her tangle with the mind-controlling Mene cult as she searched for the reason behind the mysterious death of one of her friends and colleagues; and the third, James Alan Gardner’s the Man of Bronze, placed Ms. Croft in the midst of a secret society known as the Order of the Bronze and tomb raiding Lancaster Urdmann’s bid to capture the society’s most valuable secret. All three are fun, pulpy reads that will keep fans pleased until Dan Abnett and Nik Vincent’s Tomb Raider: The Ten Thousand Immortals, the newest novel starring Lady Croft, hits stores this October.

Angelina Jolie isn’t the only Hollywood face to portray Ms. Croft. In 2007, actress Minnie Driver lent her talent to “Revisioned: Tomb Raider,” a ten-episode animated series released through online gaming service GameTap. In this series each episode focused on a different adventure of Lara’s and utilized a different style of animation (based upon various comic book artists’ styles) for that adventure. Though reactions to the show were mixed (with the bulk of the criticism aimed at the various art styles and underdeveloped stories,) GameTap followed “Revisioned: Tomb Raider” with “Revisioned” versions of other beloved video game series.

This downloadable multi-player game featured Lady Croft taking on a partner—a 2,000-year old Mayan warrior named Totec—in order to obtain an artifact called the Mirror of Smoke and defeat a Mesoamerican demon named Xolotl. Unlike previous Tomb Raider titles, Guardian of Light focused less on raiding tombs and more on cooperative fighting and puzzle-solving. Though not traditional Raider in its gameplay or presentation, Guardian of Light raked in enough sales and positive critical reception to merit an upcoming sequel, Lara Croft and the Temple of Osiris.