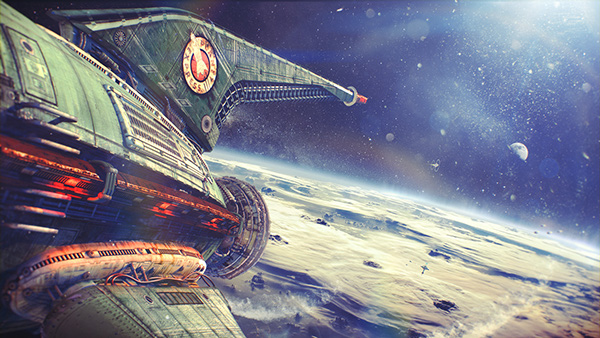 Arguably one of the TV’s saddest news last year was Futurama finally being killed off (for the second time). The show was rescued once by Comedy Central in 2008 after Fox originally canceled it in 2003.  However, the wonderful animated sit-com did have a decent run with 7 season and 140 episodes. It just seems unfair that we couldn’t get at least a few more years of  the show. There’s continually that likelihood that another network might order new episodes of the show, particularly once you scrutinize however long The Simpsons and Family guy have limped on. But ,so far that risk has been just about radio silent. Albeit Futurama has already had its last hurrah, it still definitely lives on within the hearts of its fans. However, what if Futurama were to return back with an additional realistic 3D look?

One fan has done just that and brought back Futurama with a brand new, innovative look. Moscow-based artist Alexei Zakharov recently released a series of videos and concept art re-imagining the colorful future of the show in gorgeous 3D.  The details are amazing. Futurama’s New New York was already pretty impressive in its two-dimensional form. But, it looks far more impressive when rendered in 3D to the point that it’s virtually unfair. You can check out a handful of images in the gallery below, but you can see the full album here.

The most impressive part of Zakharov album is the 32-second video that shows the world seen in the opening scene of the TV series, recreating the skyline and is completed with a highly detailed model of the Planet Express ship zipping by. According to the video description, Zakharov used many of tools to get the end result including 3dsmax, Nuke, Photoshop, and After Effects, as well as the Multiscatter plugin, Ghost Town script, and Poly FX script. Zakharov used “part 1” within the title of his Futurama album, teasing of future additions. Though it is unclear when or if additional videos are coming. You can check out the video below.

Personally, I loved the holographic MomCorp ad and the Planet Express delivery spaceship’s battered hull. But, you can also see a couple Slurm advertisements and the Tube Transport System. Zakharov has created a stunning new rendition. It would have been nice to see some character designs. Honestly, who would not want to see Fry, Leela, and most importantly Bender Bending Rodríguez, Sr. in 3D? Perhaps that’s what “part 2” of the album will include.

The artist  is in no way affiliated with the TV show, but one can dream that the series’ creator Matt Groening will see his wondrous work or somebody will use the Hypnotoad and as a result convince him to produce this rendition because this needs to be made into a special episode, at least, or even a film because that would be awesome-sauce.