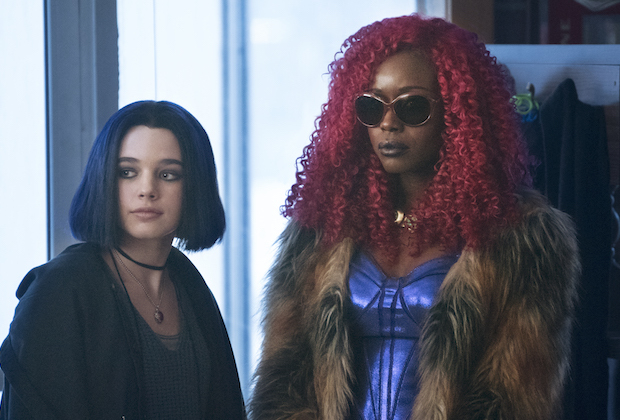 As we progress through the storyline, a lot of gaps are starting to be filled in. There was still not enough Beast Boy, but at least we got to see him. And we got some more insight into Robin’s childhood and his relationship with Bruce Wayne.

We ended episode two with Starfire showing up and saving Rachel from the crazy juiced up family that took her away from Robin, Hawk, and Dove. While Robin, Hawk, and Dove proved to be an easy obstacle for the family, Starfire was more of a challenge. She easily incinerated the father and took Rachael away from them. Even though Starfire is not sure who Rachael really is and why she is important, and Rachael does not know who Starfire is, they both agree it is best for them to stick together. We also get to see what Starfire was up too in the second episode since we did not actually see much of her. She had gone to Rachel’s home that she lived in with her mother trying to find more answers about this mysterious girl who everyone was after. She was also hoping this would lead to some more answers about herself because she still has no memories.

As for the creepy family, well they go to report that they failed on their mission to the person who commissioned them in the second episode. He also happens to be the guy who created them. They are down a father, who bears a striking resemblance to their boss who we eventually see. He is not happy with the family’s failure, as he explains why he wants Rachel. He is ready to do away with them but changes his mind when the daughter says something that makes it clear they are on the same page about what they want. At this point it’s clear that the family is some kind of evil robot created by their boss.

We got a glimpse into Robin’s childhood and how he ended up adopted by Bruce Wayne, and how Bruce Wayne shaped him into being the crime fighter that he is today. Between the scenes from his childhood, present-day Robin is trying his hardest to locate Rachel and figure out what exactly is going on. And who Rachel is. If you read the comics then you already know that Rachel has the power to summon a demon to the earth, that burn it to the ground. That is some heavy stuff. Things are definitely starting to speed up now.