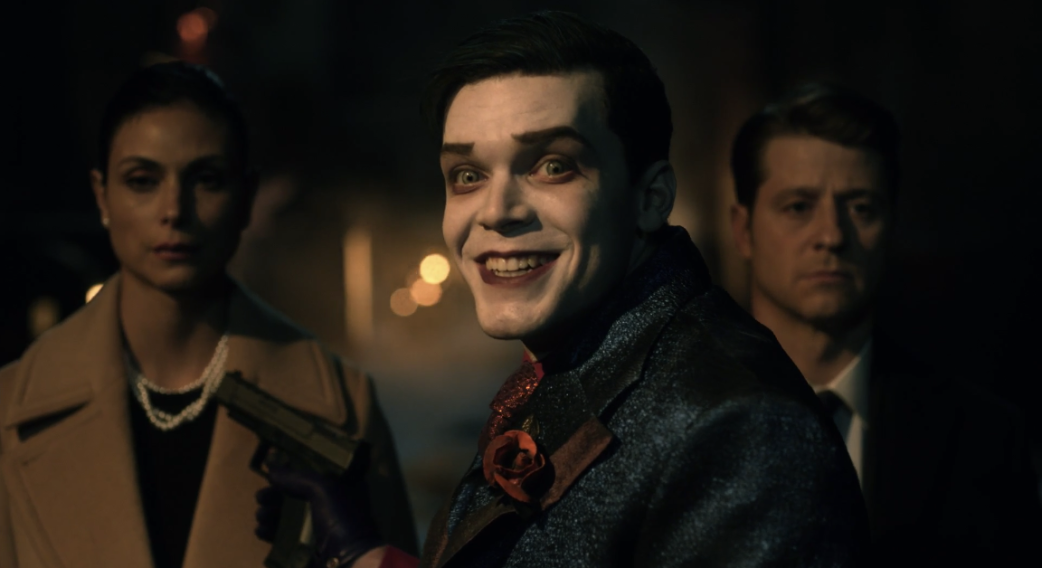 We’re now into the back half of Gotham’s final season, and I have to admit that I wasn’t blown away by this week’s installment. Of course, neither was anyone else (literally), which is part of the problem. You can generally rate Gotham episodes based on the number and size of explosions, and we only get one this week that I can remember. But it’s a pretty big one, so that has to count for something.

Although “Ace Chemicals” isn’t the most exciting hour of Gotham we’ve seen this season, it does have some memorable moments. Having Jim and Lee stand in for Thomas and Martha Wayne is a nice touch, and it redeemed yet another forgettable rehashing of the murder of Bruce’s parents. I was a little frustrated that the writers chose to go down that path yet again, but it makes sense in the context of Jeremiah’s obsession to connect with Bruce, and the parental substitutions at the last-minute give it a fresh feel. I’m not sure they were the right people for the job, though—Bruce seems to like Jim well enough, but how much time has he even spent with Lee? Besides, if you need to find a surrogate parent for Bruce Wayne, isn’t Alfred the logical choice?

We also get what appears to be a Joker origin story (sort of), and while this one isn’t the first (since we’ve had multiple Joker-esque characters), it’s the most traditional. Cameron Monaghan wasn’t even alive yet when Jack Nicholson’s Joker took a similar fall, but I’d like to think the scene was an homage to a cinematic legend all the same.

Then, of course, there were the moments that stand out because of how gloriously stupid they are. The entire scene with Jim and Lee in the police station is priceless—it’s almost as if the writers grabbed the cheesiest love scene they could find and said, “Let’s do it this way.” Sappy dialogue, a slap, then a passionate kiss? The only thing that would have made it funnier is if they’d slapped each other multiple times before rolling around on the floor. And, of course, all this is happening while Barbara’s carrying Jim’s baby. Amazing.

The other laugh-out-loud moment came at the end when Ed revealed his amazing plan for getting off the island—building a submarine. Really? So you’re just gonna find all the parts to build an airtight submarine, plus you’re gonna make sure it’s equipped with sonar to detect the mines in the river? Good luck with that. And Ed’s supposed to be the smart one.

The other big piece of news is that, because of all the chemicals in the water, the powers that be on the mainland (presumably the federal government?) won’t reunite Gotham with the mainland until they can ensure that the river’s safe. The people can thank Jim Gordon for that one, but at least no one dies because of airborne toxins. So things could be worse.