Tensions Run High as an Old Flame Returns to ‘Gotham’ 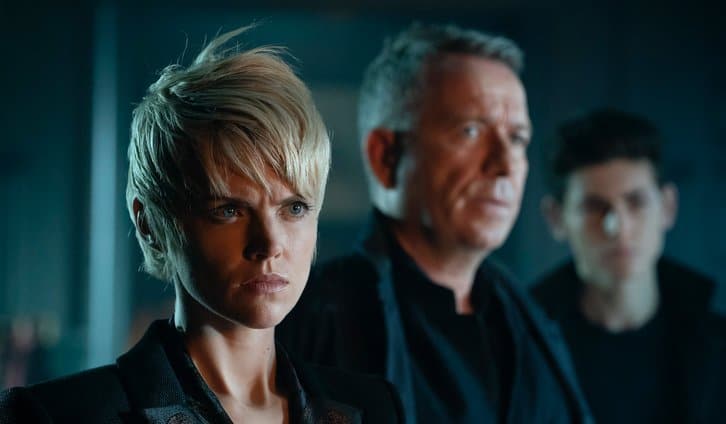 We’re halfway through Gotham’s final run, and, if you’ve been following along with me, you know I’ve been pleasantly surprised at how nicely things have progressed thus far. Aside from a few minor stumbles (and one really boring installment), it’s been pretty fun to watch. Gotham is at its best when it doesn’t take itself too seriously and just leans into the goofiness, and there’s been plenty of that to go around. And explosions. Lots of explosions. Can’t go wrong with those.

“13 Stitches” isn’t the most exciting episode we’ve seen—the body count is relatively low, and there are several moments that, even by Gotham standards, just don’t work too well. But it still does a good job of moving the pieces around the board to set things up for the back half of the season, and there are a couple of laugh-out-loud moments that balance out the dramatic tension. And that ending—we’ll get to that in a second. All I can say is—WOW.

First, let’s get the not-so-good stuff out-of-the-way. One of Gotham’s weaknesses over the years has been an insistence on throwing in as many characters from the Batman universe as possible—even minor characters that only hardcore comic book readers and watchers of obscure TV shows would know without a Google search. I’ll admit that I was thinking the same thing as Penguin when Magpie appeared (“Who the hell are you?”), and I still wouldn’t know if I hadn’t looked it up. Her only purpose for being in this episode is to provide a reason for Selina and Oswald to work together, and I’m not sure that partnership works, either. I get the fact that Oswald doesn’t have much to do right now, and Robin Lord Taylor’s too good to leave on the sidelines, but throwing him into a storyline with Selina just seems forced. Then again, I’ve been wrong before, so I’ll wait and see if it goes anywhere before passing judgment.

The other storyline that’s a little irritating right now is the whole Eduardo/Bane situation. We get it—Gotham’s full of criminals and beyond saving, so Walker sends Eduardo and his men in to raze the city and start over. But that was also Ra’s al Ghul’s motivation with the League of Shadows, and so now it feels like they’re just rehashing the same idea with a new set of villains. On the other hand, Eduardo keeps hinting at the possibility that Walker might have something deeper in mind, so maybe this is different. Again, I’ll wait to see what happens. Now that Walker’s made an appearance, we should get answers fairly quickly.

But the reason I give “13 Stitches” a pass on all that is because there are enough dramatic and/or funny moments to hold my interest and make me want to see more. All the Ed Nygma stuff was hilarious—between the fake bomb scare, the chip extraction that made him speak gibberish, and the defibrillator fight with Jim, Cory Michael Smith does some solid comedic work.

The drama comes in the form of Lee Thompkins, who’s making her first appearance since last season’s mutual stabbing incident with Ed. I wondered what might have happened to her when Ed showed up in the premiere and she didn’t, but I assumed that Dr. Strange brought her back to life (because nobody important actually dies on this show) and that she just left after that. But apparently she got the same type of brain chip that Ed did, so she’s been Walker’s backup plan all along. Fortunately, Jim’s discovered that a few well-placed electrical shocks will deactivate the chips, so Lee’s no longer a threat.

Well, maybe not a physical threat. But she’s definitely a threat to Barbara. You never quite know what Barbara’s really thinking, but there’s obviously a part of her that, despite the number of times they’ve tried to arrest, maim, and/or kill each other, is still in love with Jim. But Lee and Jim also have a very intense past, and there’s always the possibility that something could happen to rekindle that passion as well. Throw in the fact that Ed and Lee were also an item (at least in Ed’s mind, anyway), and you’ve got yourself a good old-fashioned love—square? Rectangle? Anyway, there’s four of them involved.

So the bomb that Barbara drops on Jim at the end of the hour may be the most explosive one yet (that doesn’t actually involve people getting killed, of course). Do I really think she’s pregnant? No. Is it fun watching her try to pull this off and make Jim sweat? Absolutely.