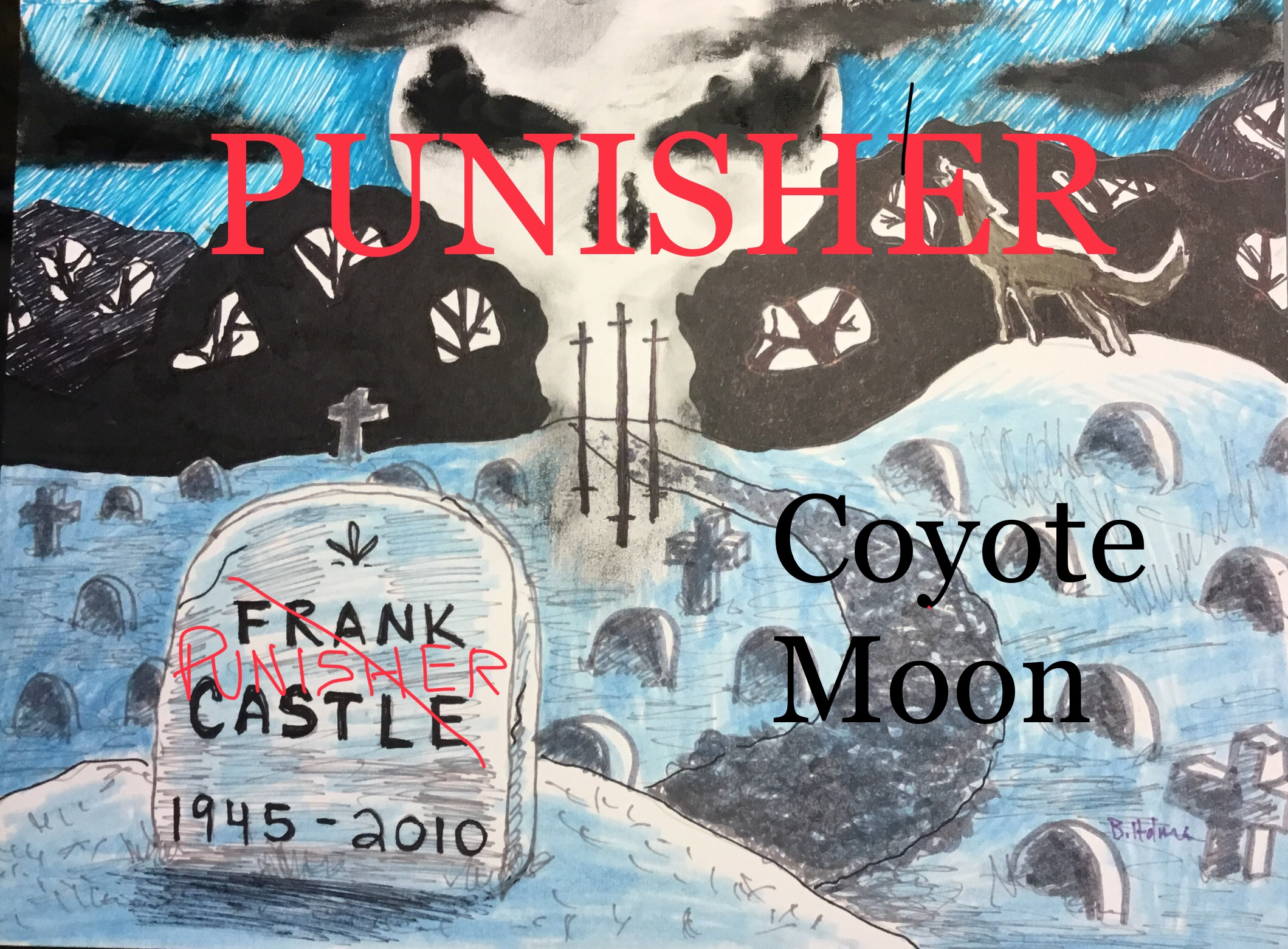 The man sat in the darkened room alone, as it was seemingly meant to always be, and as he rubbed a hand across his bearded chin, he chuckled softly to himself. He’d always hated the way facial hair made him look and he’d kept himself clean shaven for the majority of his life, but now that was another life altogether.

Frank Castle was dead! Officially at least. Technology had done what countless mafioso, hitmen, gang members, and even cops had failed to accomplish for decades, put the Punisher out of business. Facial-recognition software, cameras in every building and on every corner, and unmanned drones that patrolled the rooftops, along with a cop convention on every-other block and a price on his head that was approaching eight figures, had all made it next to impossible for him to move throughout the city undetected.

He’d had more than a couple of close calls in those last few months, even taking a few bullets from prey that had been tipped off to his presence in the area. The shit just got too damn dangerous. And painful. So he took the advice and help from a couple of the only people in the world that he trusted, and for the second time in his life, Frank Castle was laid to rest. Complete with casket, funeral, and a headstone which someone had promptly defaced:

He wasn’t sure if the tombstone edit was meant to be a tribute or condemnation, but the last time he’d seen his grave there’d been a good selection of flowers and no other graffiti or vandalism, so he figured it was safe to assume it was an homage. Either way, it didn’t matter anymore. He hadn’t strapped up or slipped on his signature black t-shirt in quite some time, and it’d been over eight years now since he’d gone by The Punisher.

He was now known as Jerry Romita and since the day after his “death,” he’d been living near the border just outside of Kino Springs, Arizona. His home sat almost directly in the center of just a little over a hundred acres and what neighbors he did have seemed to enjoy their privacy as much as he did, he’d only seen them once each the entire time he’d lived there.

Of course being just a few miles north of Mexico meant that it was hot as hell most of the time, and tonight was no different. It was after ten o’clock but the temperature was still hovering around the mid-nineties.

He got up and walked across the room, his Marine Corps experience and decades of urban hunting having resulted in him still moving more like a ghost than a man. Just as every other night for the past few months, the binoculars and rifle were retrieved but when he caught his reflection in the hallway mirror, Frank had to pause for a moment.

He looked nothing like his old self, now sporting shoulder-length salt-and-pepper hair instead of his traditional crewcut, and a full beard and mustache that were pretty much completely “salt” these days. He was still fit, his broad chest, thick shoulders and arms, along with a washboard abdomen all seemed to be in complete contrast to his gray — from the neck down he looked to be much younger than his actual years.

He made his way out onto the back porch and sat down in the battered overstuffed armchair he’d picked up at a sale in town. While he didn’t know his neighbors at all, he did spend a fair amount of time in Kino Springs, strolling through various shops looking to waste time but making a purchase or two on most trips. As such, “Jerry” was pretty well known around town.

With four dogs, more than a dozen chickens, a flock of ducks that had taken up residence in his pond, and even a few head of cattle, he was living a life that no one would have ever expected for him. For what it was worth though, Frank was enjoying the quiet life and had even found some predators to hunt most nights. Wild coyotes had taken to slinking onto his property just before midnight, looking to make a meal out of his birds, pets and/or livestock, and he found a slight pleasure in performing sentry duty.

The binoculars were a leftover from his New York days, top of the line and night-vision enabled, which meant that the canines were easily spotted, and his long-rifle with night-scope made short work of them. In the past few months he’d killed close to fifty of the beasts and with a bounty of $50 per pelt, it had become a lucrative hobby.

He scanned his property and the horizon, the full moon and light cloud cover giving him an even better view than usual. A slight sense of disappointment started spreading through him at the lack of viable prey for the night but as he readjusted and moved his gaze to a point a little further to the south, he saw something that flared his hunter instincts.

“What the hell?” He whispered to the night.

Nine people could clearly be seen, a small crowd of three women, two men, and two children, with two other men in jeans, boots, long-sleeved denim shirts and armed with M-16 machine guns, standing in the bed of an old pickup and towering over the group. They all appeared to be hispanic and that observation was reinforced by the sight of the final person standing between them, a dark-haired woman that was bound, gagged and completely nude, a Mexican flag tattoo on her right breast seeming to almost shine in the green-glow of his binoculars.

He couldn’t hear them, nor read the lips of the two men, but they were shouting and agitated, sweeping their weapons back and forth across the crowd. The naked woman was crying and Frank could make out the telltale presence of a dark imperfection on the inner-side of both of her thighs.

“Blood,” he growled. The woman had been sexually assaulted, multiple times and likely quite violently from the look of the bruising on her legs, arms, and face.

He scanned the crowd once again, searching for further signs of brutality. But when they were all suddenly appalled and horrified by something the men did or said, Frank returned his scrutiny back to the duo and stood up.

One of the men held a large, Rambo-style knife and the captive woman had dropped to her knees between them, her throat clearly cut and blood pouring from the wound, flooding down the front of her body.

“Son of a bitch!” He snarled, grabbing the rife, stepping into the yard, and marching in the direction of the trespassers without thinking.

There was no denying it, for the first time in quite awhile, tonight someone was dying at the hands of the Punisher.

Please note – This is a work of fan-fiction. I am in no way associated with Marvel Entertainment, I do not own any copyrights on the character(s) portrayed within, and this story is fully a work of fiction.

A special thanks goes to my wife, Brenda Holman, for the awesome custom “cover art” for this story. You rock darlin!