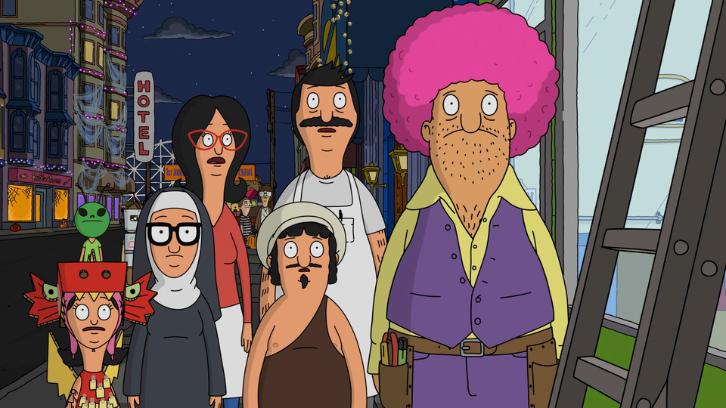 Halloween episodes are a highlight of any Bob’s Burgers season, and this year’s installation is no exception. This year, the Belcher kids are going store-to-store instead of house-to-house as all the businesses on Bob’s street are participating in the first annual Ocean Avenue Candy Crawl. Everything’s going great until a mysterious devil starts stealing candy. Wait—maybe it’s an astronaut. Or Jason. No—it’s a giant gorilla!

No—it’s just Dr. Yap, the goofy dentist who just wants to prevent tooth decay because he loves kids so much. Well, it’s actually because he just doesn’t want to have to work hard filling cavities. But either way, he’s just trying to keep kids from ruining their teeth. But hello—that’s what Halloween’s all about! As usual, Louise is the bravest of the bunch as she leads her costume-clad siblings and friends into Mutilated Mansion to save the yearly candy haul just before it’s incinerated. Halloween is saved!

Speaking of costumes, we see some really creative ones this year:

And, of course, Bob tries to be cool but comes up just short with his Bruce Springsteen (basically just a bandanna, a t-shirt with rolled-up sleeves, and jeans). Throw in a couple of bad Springsteen puns, and you have the perfect “I’m a middle-aged dad” Halloween look.

Meanwhile, Teddy’s locked in a decoration battle with Glenn, the “smell-nice handyman,” as he does his best to make Bob’s storefront look better than that of the candle shop next door (Those Who Can, Dle). Teddy pulls out all the stops to try to measure up to Glenn, but he and Bob go a little too far when they attach chain saws and other power tools to the legs of a giant motorized spider. The spider tears up Glenn’s display, which is devastating for Glenn because, as it turns out, Glenn just wants to be as good as Teddy. It’s actually a win for Teddy, which is rare—and nice to see.