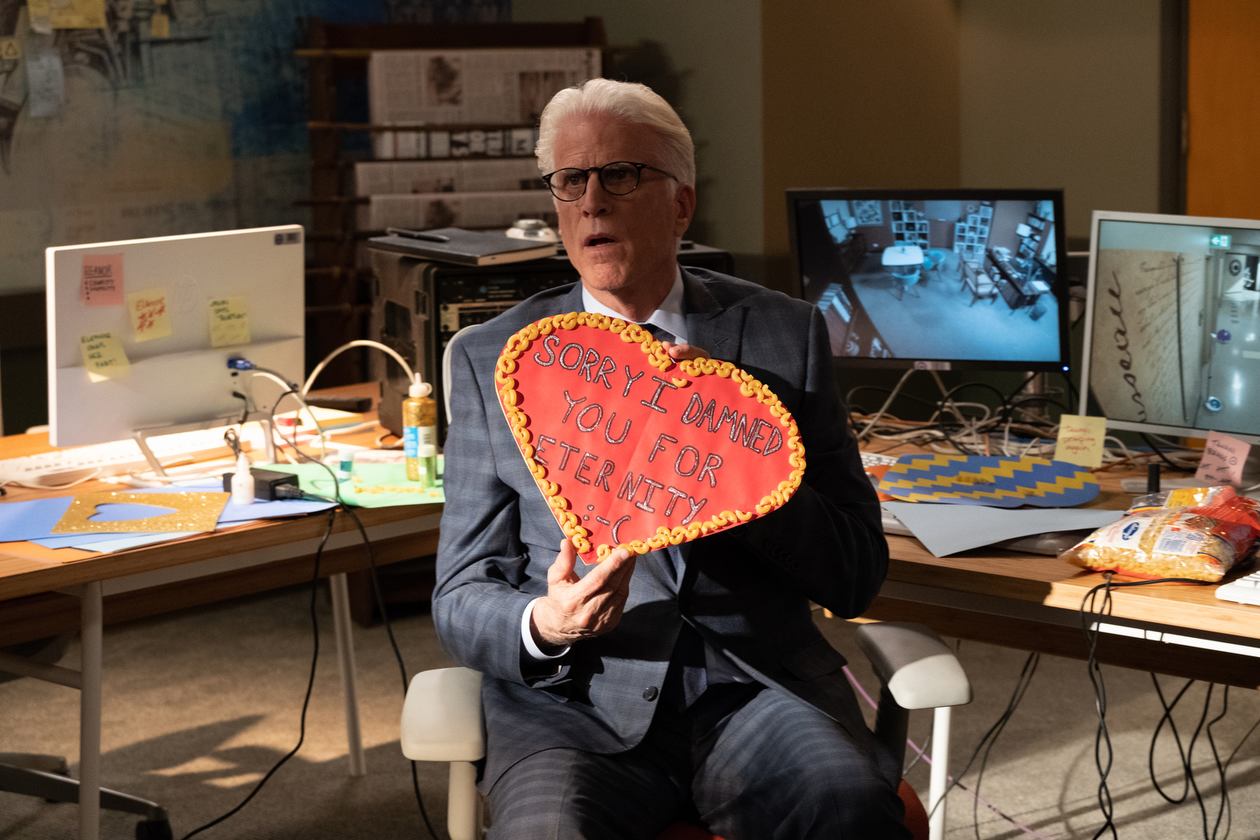 And somehow it manages to be all of these things without leaving Earth. For all my doubts about how much longer the show could continue to work while operating with planetary limitations, the writers proved me wrong entirely by finding humor and gravitas in a fun new proposition: What if you found out the entire truth about the afterlife while you were still alive? And, preventing answers to that question from becoming a cliché of bucket lists and Damascus-road experiences, there’s an unfortunate addendum for our four humans: they’re doomed to go to the Bad Place regardless of how well-behaved they are for the rest of their lives.

That’s right: Michael and Janet’s incessant meddling has resulted in eternal doom for Eleanor, Chidi, Tahani, and Jason, since their intentions of being good are corrupted by gaining the knowledge of the afterlife. Even though Michael (and series creator Mike Schur for that matter) insists that the Good Place and Bad Place don’t directly correspond to the Judeo-Christian concepts of heaven and hell, this episode seems to present a Garden of Eden scenario for our protagonists, each of whom has been tricked into taking a bite of forbidden fruit from the tree of knowledge. It’s not as though Michael is quick to explain the entire system—he concocts a ramshackle story about himself and Janet being FBI agents spying on four connected individuals in immediate danger—but his decision to walk them through all that has happened so far in the series is an act of resignation that appears to have humongous consequences for everyone involved.

Having Learned of Their Inevitable Damnation, the Four Humans Go Their Separate Ways

Eleanor heads to a bar where she intimidates the bartender into giving her a free drink, Tahani and Jason begin to give away millions of the former’s riches to charity, and Chidi simply breaks down. Wandering aimlessly through the university campus, he scares away a drug dealer by quoting a rather helpless passage of Nietzsche. Then, after being sprayed by garden sprinklers, he removes his sweater vest and shirt, revealing an unexpectedly swole body. I won’t go on a diatribe about whether Chidi’s immaculate build can be reconciled with his constant indecisiveness (this important topic has been covered extensively by the best of the Good Place critical community), but the very act of disrobing in public reveals a side of Chidi we have not yet seen on heaven or Earth. 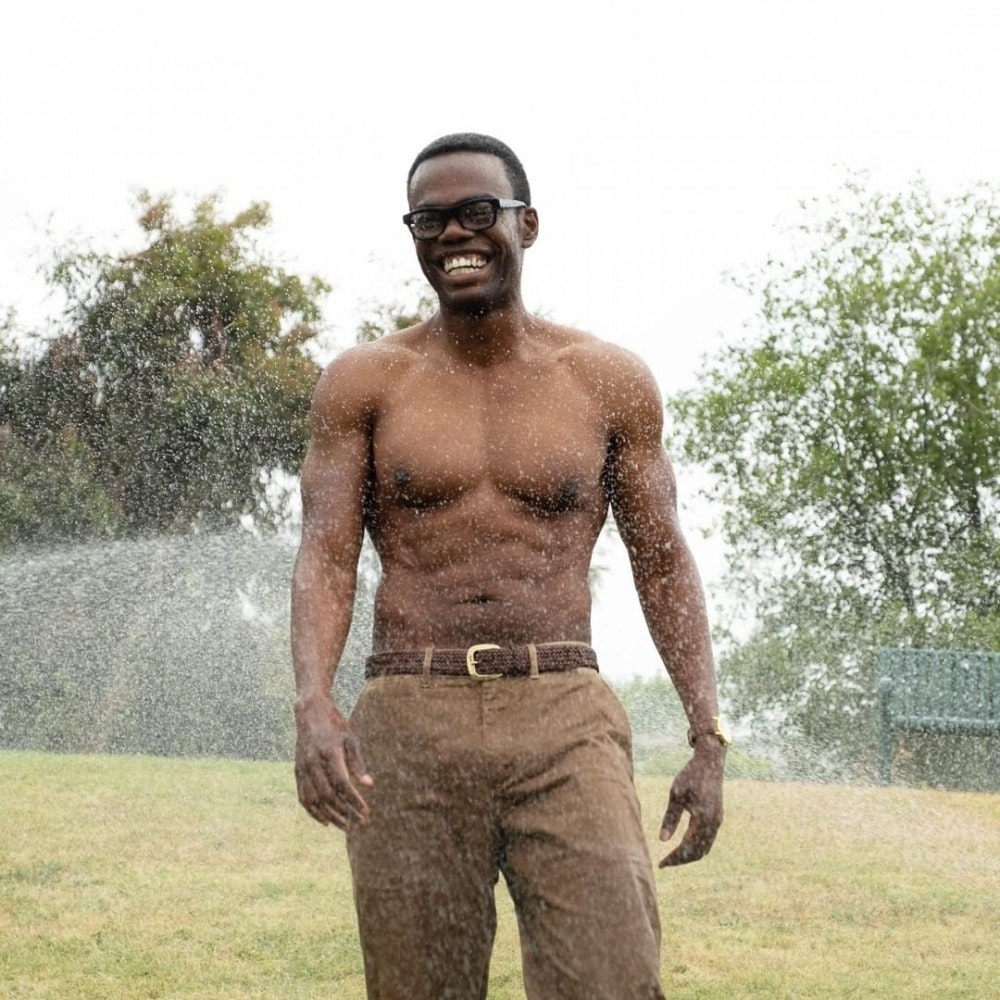 After all of Chidi’s various philosophical theories have been expounded upon, we finally find the one that “breaks” him—fatalism. Chidi began the series questioning whether true change is possible, and, with Eleanor as his test subject, found that positive human change can indeed be achieved. With Michael’s assertion that all of their future actions will bear the taint of wrongful motivation, Chidi realizes that even though change is possible, it suddenly doesn’t matter anymore. Neither he nor his three friends chose to have the afterlife spoiled for them, but it happened anyways. Ultimately, each of Chidi’s explanations of the various theories of moral philosophy are deemed null and void here, since they’re all founded on some level of individual choice that’s negated by the existence of a predetermined fate.

It’s no wonder then that when Eleanor, having been unable to let go of her desire to become a better person, returns to Chidi, she finds him putting together a rancid chili of marshmallow Peeps and M&Ms while ranting about nihilism in front of his ethics classroom. In a scene that mirrors the ending of “The Brainy Bunch,” Eleanor offers a small torch of hope in a relatively hopeless situation. She asserts that their knowledge of the afterlife may enable them to help those without that knowledge still make it into the Good Place. Just because the outwardly good actions of Tahani and Jason—who, having spent most of the episode handing out wads of cash to unsuspecting Aussies, decide to get married in order to maximize the potential utility of the Al Jamil estate by putting it in Jason’s hands (yikes)—may have their intentions corrupted by forbidden knowledge doesn’t mean that others can’t learn from their example. Or, though this may come off as excessively sentimental if poorly executed, there is a chance that the group’s efforts will be seen as so overwhelmingly selfless that they are granted admission to the Good Place after all.

As if the show wasn’t already delivering on its narratively ambitious promises this episode, the last-minute cliffhanger sees the return of my new favorite character Larry Hemsworth, who, a mere twenty-four hours earlier was expecting to run away to England with his bride-to-be Tahani. While this loose end will surely end in some heartbreak, I have a feeling the writers are hiding a gigantic puzzle piece in the manifesto—we’ll call it Chekhov’s Manifesto—that we see glimpses of Michael and Janet composing throughout the episode. The episode lingers on it too long for it not to have some sort of later plot relevance, but exactly what that might be is pretty up in the air at this point. It could do exactly what Michael hopes it will, which is to convince those in charge of judging humans that there may be better ways of accomplishing that task.

But nothing on this show ever comes that easy, so the alternatives seem just as possible, if not more probable. For instance, Shawn could come across the manifesto and use it as direct evidence against Michael and Janet if a cosmic courtroom showdown scene ever occurs. Or, someone on Earth might come across it and spread it far and wide, thereby corrupting the intentions of nearly everyone. In that case, would there need to be some sort of planet-wide reset? Or, perhaps having the entire explanation of the afterlife in written form will help the group discover some previously unrecognized loophole that may warrant them another shot at the Good Place.

While I’ve been vocal in my complaints about how long it’s taken the writers to hit their stride this year, I have to acknowledge just what a seemingly impossible corner they wrote themselves out of with last season’s last-minute return to Earth. This is the first time in the season where the show seems to be inspiring new questions rather than merely repeating old ones, and I have a feeling we’re just getting started.