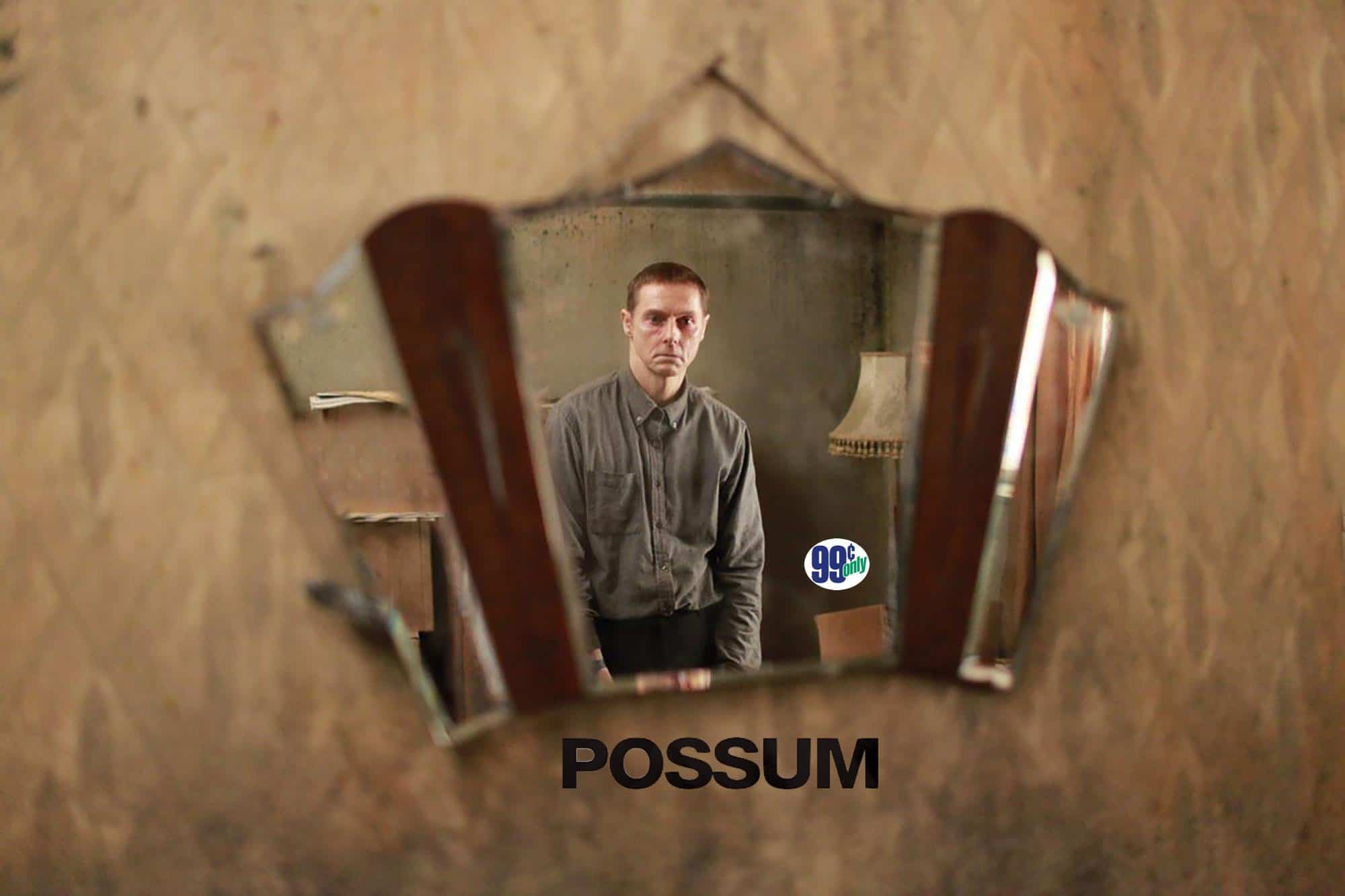 Ok, this week’s featured $0.99 movie is a distinctly British documentary called Tea With The Dames. In case you’re wondering, the Dames in question are acting legends Judi Dench, Maggie Smith, Eileen Atkins, and Joan Plowright. The film – directed by the great Roger Michell – takes a fly on the wall approach as the titular femmes trade tales about their storied careers. If you’re into that sort of thing (and you probably should be), Tea With The Dames appears to be every bit as charming as it sounds. As endearing as the film most certainly is, I was looking for something a little more adventurous this week, and the “Movies You Might’ve Missed” section in iTunes provides just such an option. So …

This week, Sean Harris stars as a disgraced puppeteer who returns to his childhood home to confront the demons of his past in Possum.

After being sacked from his university gig for an unknown (but presumably scandalous) reason, a disturbed man (Harris) returns home to the English village he grew up in. He steps from the train with a single bag in hand, and heads quickly to the dilapidated home in which he grew up. There he finds the bedraggled Stepfather (Alun Armstrong) who tormented him throughout his youth. As an unsettling cat and mouse game seems to unfold between the pair, the ghoulish artifact in the man’s bag takes center stage, and transforms Matthew Holness’ gritty psychological thriller into the outright metaphorical nightmare that is Possum. 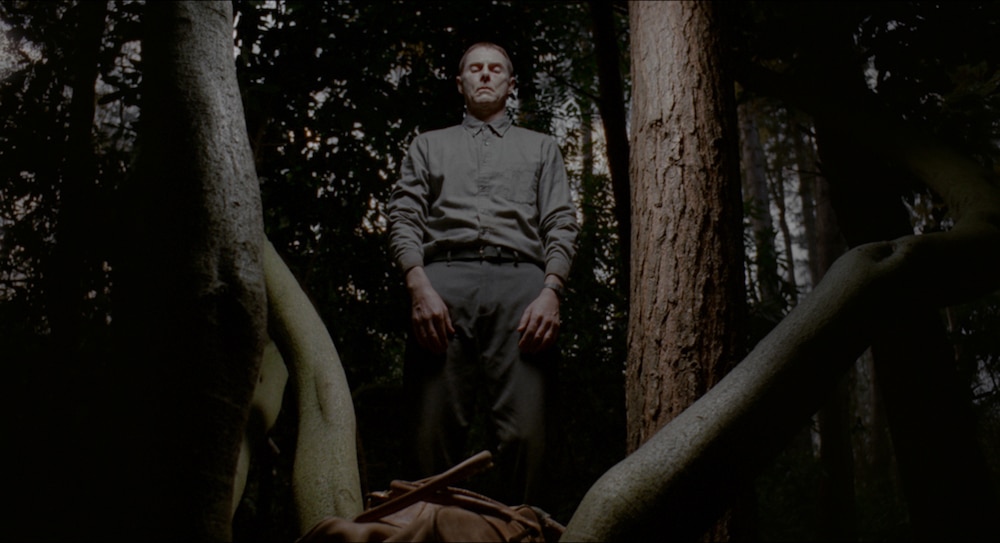 For the sake of being completely upfront (and possibly saving some of you wonderful readers some time), we’ll go ahead and tell you that, if you suffer from either arachnophobia (fear of spiders) or pupaphobia (fear of puppets) what’s in said bag is the sort of ghastly confection that will haunt you for the rest of your days. So yeah, if you checked either of those phobic boxes (and especially if you checked both), do yourself a favor and forget you ever even heard about Possum. And if you are the sort who can handle the sight of such an unpleasant prop, well, you should know that you’re also in for a slow-burning, oppressively bleak character study that’ll test both your patience and your psyche.

Still with us? Good, we’ll go ahead and assume you’re the sort of adventurous genre purist who’s well versed in the sort of unwieldy nightmare visions conjured by greats like David Lynch and David Cronenberg. If that’s the case, you’re going to feel right at home in the prickly, emotionally draining hellscape Matthew Holness builds from one frame to next in Possum. Fans of Lynch’s Eraserhead and Cronenberg’s Spider will likely see the masters’ obvious influence in every frame of Holness’ feature debut, though the actor turned director spins something wholly original from those inspirations, crafting an ambitious, pitch-black narrative about a fractured psyche that horrifyingly blurs the lines between the real and the imagined.

Tasked with bringing that fractured psyche to life is the always amazing Sean Harris. If you don’t recognize his name, you’ll almost certainly recognize the actor’s face from his work as super-baddie Solomon Lane in both Mission Impossible: Rogue Nation and Fallout. More savvy cineastes will also recognize Harris as a British indie film stalwart who’s appeared in such marvelous works as Brothers of the Head, 24 Hour Party People, ’71, and Macbeth. If you have seen Harris work, then you already know he tends to bring a simmering, bottled-up sort of tension to every role he plays. Possum is no different, with Harris internalizing a powder-keg of emotion within his character’s slight frame, rigid posture, and wispy voice, garnering equal parts fear and sympathy for the man perpetually tortured by a past he cannot escape.

Harris’ performance alone (particularly the ways in which he beholds the hideous contents within his bag) is enough to imbue Possum with an exhausting level of tension. Double that tension when you factor in the mirthfully menacing work delivered by Alun Armstrong as the skeezy Stepdad, and watch it boil over into nearly unbearable behind the searingly subversive soundscape provided by The Radiophonic Workshop. Holding the madness together is the lavish, naturalistic photography from DP Kit Fraser that serves as a stark counterpoint to the nightmarish visions within.

As relentlessly heavy as Possum is throughout (and yes, it’s a maddeningly difficult movie to sit through), Holness somehow assembles those abrasive pieces in a fashion that tempers the film’s overtly bleak overtone just enough to make it tolerable. In doing so, he dares viewers to commit to the nightmare at hand, and in that nightmare, he somehow delivers a film that – in spite of its oppressively grim tone – is surprisingly difficult to look away from … even if you often find yourself looking through your fingers.

Here’s the thing, Possum is a terrifying, slow-burning nightmare of a film. It’s also an intriguing, meticulously executed character piece unafraid to grapple with tough issues (i.e. the enduring damage caused by childhood trauma and abuse). Just in case we haven’t been crystal clear, Possum is every bit as bleak and unsettling as such a topic demands. As such, we really can’t recommend Possum to everyone – if only because most of you (even genre diehards) will almost certainly turn this one off about 15 minutes in … if not before. If you are one of the brave souls willing to dive headlong into Possum‘s unholy bag of terrors, please don’t blame us for the month’s worth of nightmares that are all but certain to follow … ’cause we have absolutely given you fair warning. For everyone else, you would probably do well to go ahead and enjoy some Tea With The Dames.