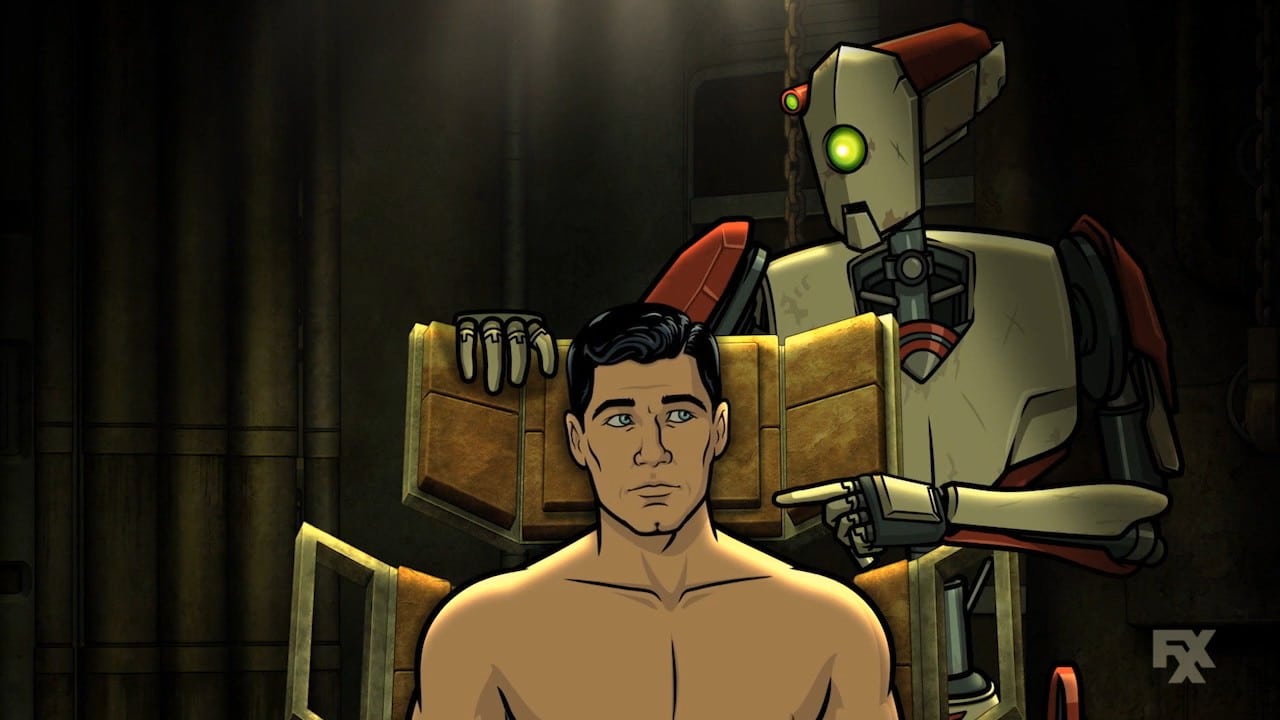 Back in 1979, we learned that, in space, no one can hear you scream. But in 1999, apparently everyone can smell you if you get really excited (and you also happen to be a huge rock monster).

After last week’s outstanding season premiere, I had high hopes for Archer: 1999. And I still do. Admittedly, I’m not quite as impressed with “Happy Borthday” as I was with the first installment, but it still checks all the boxes: lots of witty dialogue, a mediocre Archer plan that just happens to work, and most of the characters just being their amazingly entertaining selves (despite whatever form they might be taking this time around).

Plus, they work in a couple of professional wrestling references, and I’m sorry—that just makes me happy. Although, to be fair, everyone knows you can’t have a bunkhouse stampede AND a battle royale at the same time. That would just be crazy. Besides, you’d need cowboy boots and lassoes for one and ring ropes for the other, so it would never…

Way to go, man. Somehow you’ve managed to get all geeky and overanalyze what may literally be the simplest form of entertainment ever created. That’s amazing (and not in a good way).

Sorry about that. Where was I? Oh yeah—the Garjek Moonbase. It’s Bort’s birthday, and he’s celebrating with gladiator-style fights featuring most of the Seamus crew not named Sterling Archer. Archer’s actually in another part of the base being tortured by Funbeak, which is basically just a robotic stun gun with wings. There’s lots of genital tasering, which makes it even worse when Malory takes over Funbeak and has to keep up appearances before she can help Sterling escape. Nothing like taking 50,000 volts to the crotch courtesy of your mother, huh?

As for the fighting itself, everything would have been fine if they’d all stuck to the original plan and faked it (yes, kind of like pro wrestling) until they could figure out a way to escape. But this is the Archer gang, and things like sanity and logic are generally in pretty short supply. Cyril goes rogue and slices Krieger in half (naturally), and Carol goes all Berserker (yes, he was a wrestler, too!) on Lana before Cyril comes to the rescue. Archer eventually saves the day in his usual over-the-top fashion, but it’s fun to watch while it lasts.

Of course, it’s Archer’s fault they’re in this mess to begin with since Barry Six only captured them all to get to Archer so he can get back whatever Archer stole from him to begin with. I don’t care what form he takes; Barry is one of my all-time favorites (and Other Barry’s not bad, either). I can only hope that we’ll see more of him since Archer still has his stuff.