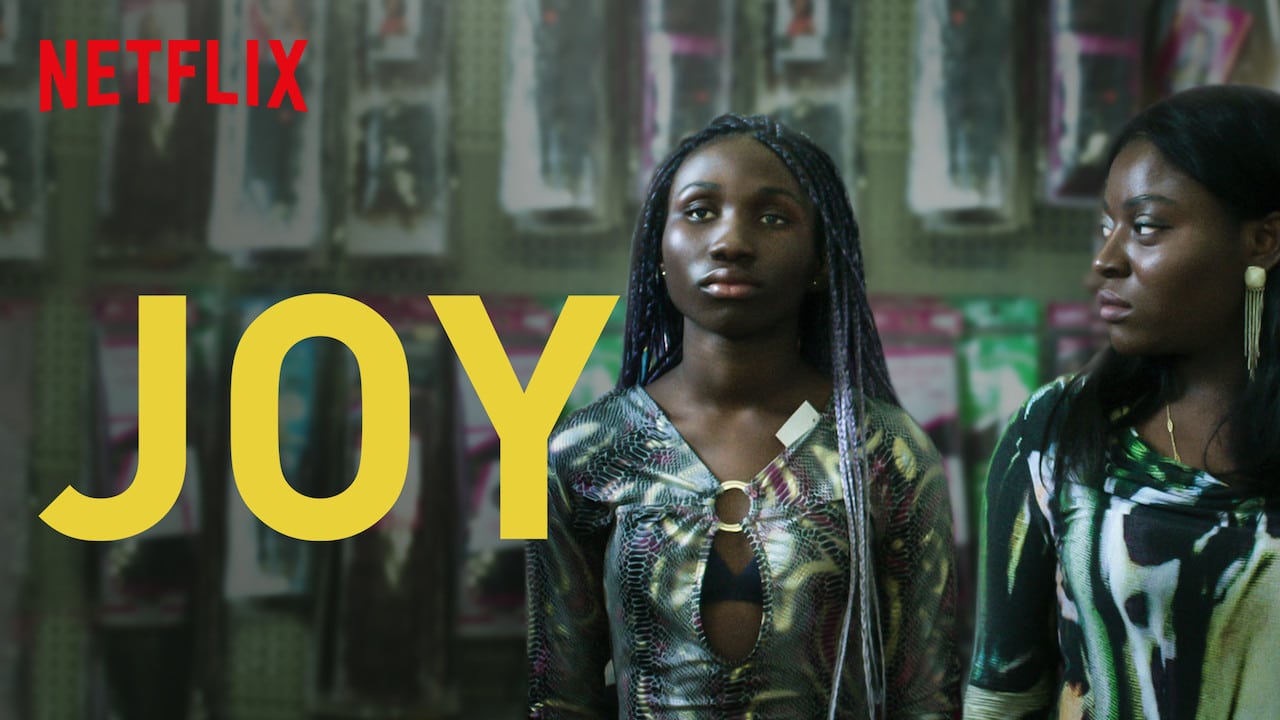 Winner of the Best Film award at the 2018 London Film Festival, Joy was made available for streaming by Netflix on May 24. Written and directed by Sudabeh Mortezai, the film racked up more than a dozen wins and nominations in at least ten festivals in 2018 (among them, the Chicago International Film Festival and the Venice Film Festival).

Mortezai is an Austrian woman of Iranian descent, and Joy is her second feature film, which follows 2014’s Macondo, a film she also wrote and directed. These two feature films follow Mortezai’s first two efforts as a director, which were documentaries: Children of the Prophet (2006) and In the Bazaar of the Sexes (2010). So it is no coincidence that her style is often referred to as that of a documentarian. That certainly bled through onto Joy.

Indeed, if you know nothing about the film or the director, when you first watch the trailer for Joy, it will feel like a trailer for a documentary. Even as you start watching the movie itself, a nagging contradiction will perhaps linger in the back of your mind, as it did in mine, until you merge, as a viewer, with the filmmaker’s tone.

You see, Joy is an unusual hybrid of, on one hand, decisive cinematic narrative (a clearly thought-out screenplay, storytelling through flawless shot sequence, and a tale that is as dense as they come), and on the other hand, a cast of unpolished actors, whom, it turns out, were never given a script and had been instructed to improvise.

Mortezai shot the film in chronological order, she would explain to the actors what the scene was, and give them directions. Even though Mortezai had a material screenplay with a clear story line, she didn’t write dialogue, and kept the actors in the dark about how the story was going to develop. Instead, she had the actors participate in the creation of the characters, and solve the scenes through improvisation in a collaborative effort.

And the effect her process produced is this: you feel like something is happening, and the camera happens to be there to catch it. Your senses are tricked into experiencing something anarchic and lifelike, when, in reality, there is a measure of method that will sneak past the immersed eye.

Yes, the actors are improvising, and their delivery is not artful, but they are players in a no-nonsense story that knows where it is going. And as the story is being told (and told so well), and as it punches you in the gut, that’s when the documentary feel dissipates, and the artistic endeavor becomes transparent: when you realize that there is no fat in the story arc.

The result, as far as filmmaking is concerned, is a kind of unsettling intimacy. These are actors not using the conventional language of acting: there is no grandiosity, no selling, they hesitate and stammer, their lines are not delivered with the conviction of the actor or actress who has a menu of affects at his or her disposal. And so what you get is this uncooked authenticity. And that authenticity is only further fueled by how psychologically tense the story is, and by how disturbingly inhumane the universe it portrays is.

Joy and Precious are the two main characters of this heavy drama. Joy is a Nigerian woman working as a prostitute and living illegally in Vienna, Austria. Most of the money she earns through sex work goes to her ‘Madame’ (Ma, also Nigerian) whom she is indebted to for bringing her illegally to Austria. She shares an apartment with other Nigerian women beholden to similar agreements with Ma, who retains their passports until their debts are paid in full.

As a way of controlling these women, to make sure they don’t run away or report the ‘Madame’ to the authorities, a cruel mental and emotional threat hangs over them: Juju, a religious practice that made them swear an oath back in Nigeria. In exchange for safe passage to Europe and protection from bad spirits and harm to their families, the women promise, via a religious ceremony conducted by a Juju priest, to not betray their sponsors, and are bound to that oath until their debts are paid off.

And because in addition to paying their debts, the women are also responsible for helping their families back home financially, the process of becoming debt free can take years. However, Joy is a veteran of the game, and her debt is almost paid, even though, on top of everything, she has to hire a woman to take care of her little daughter, who also lives in Vienna.

Enter Precious: a baby-faced teenager newly arrived to Austria from Nigeria. Ma tasks Joy with the responsibility of supervising Precious. Precious is a problem to Ma because she is not making as much money as she should be making. The premise of the movie is already inescapably heavy. But here’s where it delves into nauseatingly hellish territory: you see, the problem, in Ma’s eyes, is that the child isn’t making an effort to turn a profit because she hasn’t been smacked hardly enough with reality yet.

Not everyone will be able to stomach the scene I’m talking about, even if Mortezai is prude about showing you the horror (for reasons that have to do with the needlessness to exploit suffering). But Mortezai doesn’t sugarcoat things, and confronts you with the real despair and helplessness of finding oneself in a place where all vocabulary becomes obsolete.

Joy is the tragic heroin, resilient in a universe where every option leads to a form of suffering that would make most people crumble. This film couldn’t have been made with more flesh and bone than what it was made with. And, unless you’re dead inside, Mortezai will have you unequivocally and totally emotionally invested in Joy’s saga.

But Mortezai hits you just as hard on a macro level. The vicious cycle of sex trafficking is shockingly on full display as a cross-generational cultural cancer. We get to see, in real time, the monster feeding itself with three generations of this subterranean and exploitative industry.

Precious is the wide-eyed, naïve novice, a kid who hangs posters of Beyoncé and Michelle Obama on her wall. Joy is the young mother in the eye of the storm, she’s about to earn her freedom – but what does that mean? With no other skills, and living illegally in a country where she is not welcome, she will feel pressured to stay in the business, either by continuing her line of work as her own boss, or by becoming a Madame herself. And then there’s Ma, an older woman, and a former sex worker herself, the victim turned oppressor.

But ultimately the cruelty of this no-way-out dilemma reaches its high point when, in a sobering conversation, Joy forces Precious, for all purposes a child, to take stock of the harsh reality she finds herself in. What leads to that conversation is that, for reasons that are not clear, Ma decides that Precious will be sent to Italy. Joy is to take her by train to a location where Precious will be handed off to a man who will now be responsible for her.

On the train, they are surprised by an unexpected police control operation asking passengers for identification. Fearful of detention and deportation, they manage to hide in the bathroom, and evade the officers by leaving the train before their destination. Once off the train, Joy calls the man to come pick them up. He will, but they will have to wait.

Precious then pleads with Joy to let her go, and tell Ma that she ran away or that the police got her. Joy shuts her down, and makes her see the unfairness and the selfishness of her intentions, because regardless of whether Ma will believe Precious ran away or was arrested, Joy will be held responsible for her escape, and be made to pay her debt: “So I should carry your cross for you and let you go, and start to pay your own debts when I’m almost done with mine, right?

It is the height of intolerable anguish when the responsible thing to do means forsaking your own humanity. Skip Joy if you’re looking for sunny entertainment. But looking the other way will not make reality go away. Mortezai immersed herself in Austria’s Nigerian immigrant culture, and delved into its unpleasant side.

Joy is heavy, ugly at times, but not totally devoid of light: African exuberance, music and color do not go undocumented. And it is remarkable that, despite the carte blanche given to her actors, Mortezai is still able to steer the movie with her natural storytelling ability. But in the end, despite the dark subject matter, Joy only gains life if we’re all complicit in experiencing it with a moral compass that knows which way is up. To feel the weight of Joy is to somehow acknowledge your own spark within. And it may not be enough consolation, but it’s not nothing.

How To Play Your Favorite Retro Games