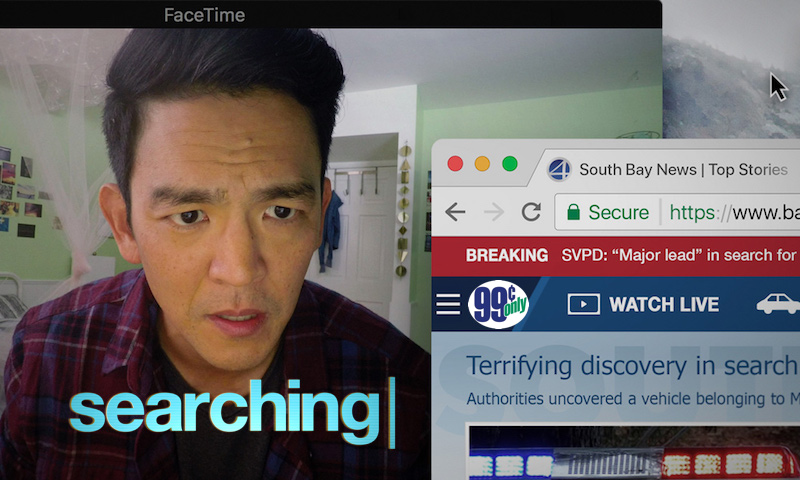 This week, a desperate father races against the clock to find his missing daughter in Searching.

I’m About to Be in Trouble, Aren’t I?

Just two years after the tragic, untimely passing of his wife, David (John Cho) and his not-quite 16-year-old daughter Margot (Michelle La) are seemingly getting by just fine. But when Margot suddenly vanishes, David’s online sleuthing forces him to accept the fact that his daughter may not be who he thought she was. With the clock ticking – and with the help of a passionate detective (Debra Messing) – David frantically searches the tangled web of Margot’s online presence, hoping that unraveling the mystery of Margot will help them figure out where the missing girl is … and potentially who may or may not have taken her. So begins the twisty, techno thriller Searching. 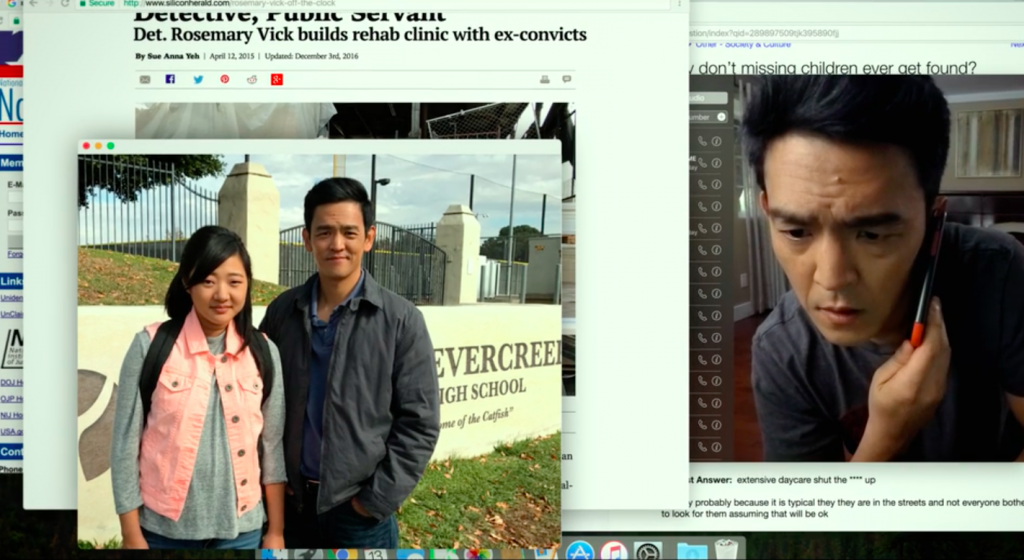 She Needed You to Talk to Her

A quick word of warning to those of you who read the words “techno thriller” and maybe began picturing a slickly produced, tech-savvy sci-fi flick – Searching is not that sort of techno thriller. There are no sentient programs trying to take over the planet in Searching. Nor are there any fantastical, futuristic gadgets/weapons, or dastardly media conglomerates bent on world domination, or nasty computer viruses threatening to bring down society at play. Rather, Searching is a savvy, paranoid little techno thriller grounded in the here and now of the world, and populated solely by the technology (cell phones, laptops, apps, and social media platforms) that most of us use every single day … which actually makes it far more disturbing than most of its genre mates.

Which means that, if nothing else, Searching is a jarring look not just at how all that now commonplace tech can be easily manipulated to nefarious ends, but also how it can be used to track our day-to-day movements both online and off, and, of course, how the relentless onslaught of information that tech allows access to can continuously shape and reshape our view of reality for better and for worse.

Of that first worry, I’ll offer that Searching does in fact employ online manipulations to some seriously nefarious ends, and that said manipulations supply the film with a handful of plausible, skillfully executed plot twists throughout. Of the second, I’ll posit that many of those twists are direct results of the film’s procedural-styled narrative – i.e. a missing persons investigation driven largely by the online sleuthing of a frantic father who’s slowly beginning to realize he didn’t know his daughter as well as he thought. Of the last bit, I’ll just say that Searching‘s stunning use of perpetually shifting realities in the information age is what makes its central narrative such an engrossing little mystery. 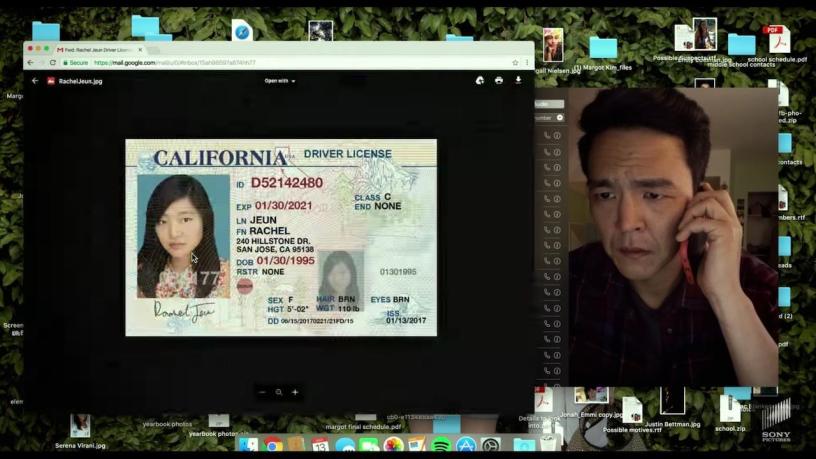 Regarding that mystery, I don’t want to say too much. Searching is, at the end of the day, a mystery film, so the less you know about its plotting and ever-twisting narrative the better. While the central plot itself is a relatively simple missing teen premise, you should know that the bold way Director Aneesh Chaganty executes that plot is a bit of a stylistic coup that makes Searching such a fascinating new addition to the techno thriller genre.

What’s the big deal, you ask? Well, every thrilling moment of Searching‘s 102 minute tale unfolds entirely within the confines of a video screen in one form or another. While that format has been used to varying (but often gimmicky) degrees of effectiveness in horror flicks like Unfriended, few films have used the format to such stunning effect. That there are scenes throughout Searching that find Chaganty filling his frame with an on-screen FaceTime call and iMessage conversations while notes are being made in spreadsheets/notepad, and searches being made in other pop up screens should feeling not just claustrophobic, but absolutely consumed in information overload.

It works because information overload and a “right now isn’t fast enough” sort of mentality has become the day to day experience for most of us, but also because Chaganty integrates the style so full into the narrative that it never feels gimmicky. For their parts, the actors (save for Messing who makes a melodramatic mess of her role) fill the emotional void that might’ve resulted from Searching‘s stylistic approach. Particularly impressive is Cho (he’s come a long way since his Harold and Kumar days, folks) whose commanding performance lends a pressing dramatic anchor to virtually every scene of the film, helping make Searching the rare techno thriller that isn’t just a stylistic success, but a deeply humane one as well. 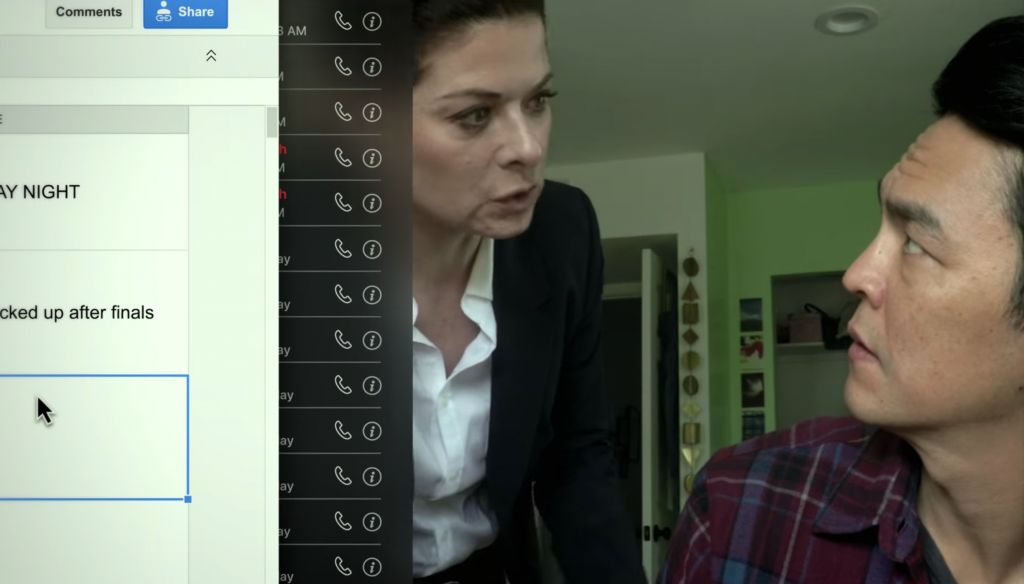 Here’s the thing, Debra Messing’s performance in Searching is problematic to say the least. So much so that it often undermine’s the film’s stylish premise, and overall dramatic impact. That being said, the films harrowing setup – fueled by structural intrigue and a patently transfixing turn from John Cho – are more than enough to overlook one off-key note in this otherwise well tuned little thriller, and they easily ensure the film’s drama hits home the way it should. All of which, makes Searching well worth your hard-earned dollar this week. Enjoy!