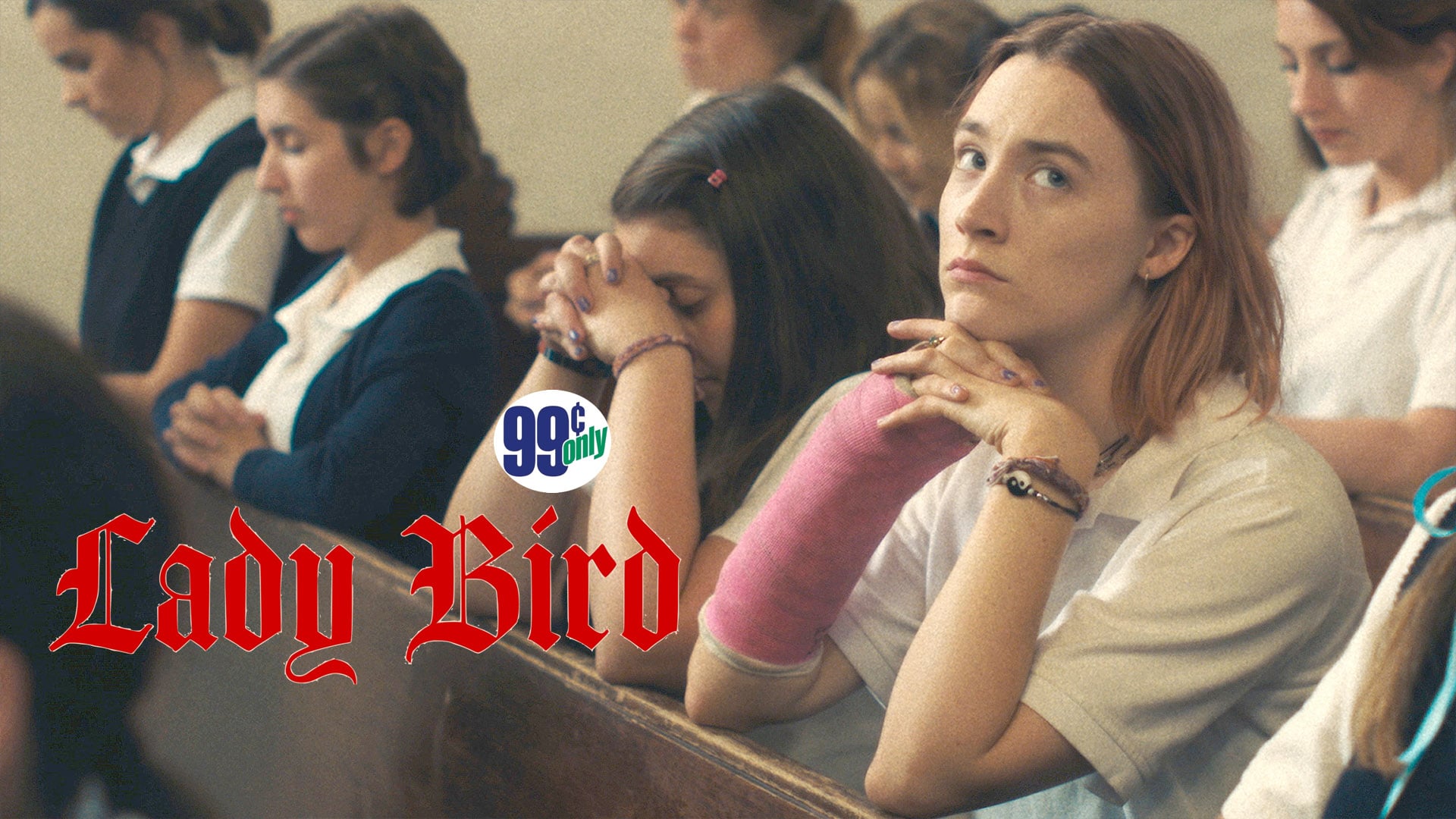 This week, Greta Gerwig takes to the wilds of suburban Sacramento for the teen dramedy Lady Bird.

Christine “Lady Bird” McPherson’s senior year at Sacramento Catholic High School is going about as one might expect, she’s constantly fighting with her mother, she’s suffering through the pangs of love and dating in high school, and she can’t figure out what she wants to do with her life. The only thing she knows for sure is that she doesn’t want to do it in Sacramento. Welcome to the angst-fueled agony of Greta Gerwig’s tender-hearted coming-of-age tale, Lady Bird.

What If This Is the Best Version?

If you read that synopsis and thought, “Oh great, another angsty teen-girl flick about an artsy young woman struggling to figure out who she is,” then we’d invite you to go ahead and bite your tongue, ’cause Lady Bird – with its hearty blend of acerbically human comedy and acutely realized teen drama – is much, much more than that. Written and directed with a beguiling delicacy by indie wunderkind Greta Gerwig, the film unabashedly borrows cues from dozens of teen classics from the past, but undercuts the teen drama tropes that tend to date those films. In doing so, Gerwig crafts a teen-girl tale set in the early 2000’s that feels both timely and timeless in today’s “me too” world.

That being said, Lady Bird is an angsty teen-girl flick about an artsy young woman struggling to figure out who she is. Part of what makes Gerwig’s film such a different type of teen-girl experience is that she centers her story not just on the idea that her heroine is figuring out who she is, but that she’s really trying to figure out who she might become. As you might expect, that journey is fraught with firsts (i.e. love, sex, heartbreak, etc.), but Gerwig tempers those common teen themes by focusing equal energy on the young woman’s life at home.

The central relationship in Lady Bird isn’t about a boy, or even a best friend, though those connections are vital factors in the film’s overarching story. Rather, much of Lady Bird‘s narrative is centered around the young woman’s complicated relationship with her mother. As such, Lady Bird‘s narrative is wholly reliant on the work of star Saoirse Ronan (one of the best actors of her generation) and her on-screen mom Laurie Metcalf (one of the great, unheralded character actors in history). The pair’s work resulted in well-earned Oscar nomination for both, and they’re flanked by equally winning turns from Tracy Letts, Beanie Feldstein, Timothee Chalamet, and Lucas Hedges.

Of course, if you’ve been tracking Greta Gerwig’s career over the years, then the top to bottom quality of her solo directorial debut (she co-directed 2008’s marvelous Nights and Weekends with Joe Swanberg) will come as no surprise. Lady Bird may have made a household name of Gerwig as a director, but she’s been delivering quirky, impassioned performances in films big and small (mostly small) for over a decade now. Her breakout was always a matter of when, not if, and even her biggest fans would not have expected it to come behind the camera.

Either way, the fabulously talented Gerwig has officially arrived. It seems only fitting that Lady Bird – a welcome addition to the wave of coming-of-age films centered around young women currently overtaking Hollywood – is the film that brought her to the masses. After all, those films (2016’s The Edge of Seventeen amongst them) are starting to feel more and more revelatory, mostly because they’re films about young women that were also written and/or directed by women. Lady Bird – with its heart on its sleeve sentimentality and no bullshit frankness – may prove the pinnacle of that uptick. More likely it’ll serve as a rallying cry that it’s high time women were given the chance to tell these sorts of stories for themselves, and Greta Gerwig is set to be the auteur/herald that leads the charge.

You bet. Just to be clear, I’ll say that Lady Bird is not just one of the best teen movies produced in the past decade, but one of the better movies produced over that time, period. Gerwig’s film is heartfelt and heady, insightful and inspiring, eloquent and idealistic, often within the space of the same scene. It’s also brutally honest and occasionally infuriating,  just like the angsty, formative days it’s meant to encapsulate. In the end, Lady Bird captures the anarchic/amorous vibe of those days as effortlessly and effectively as any teen film you’re likely to see any time soon.