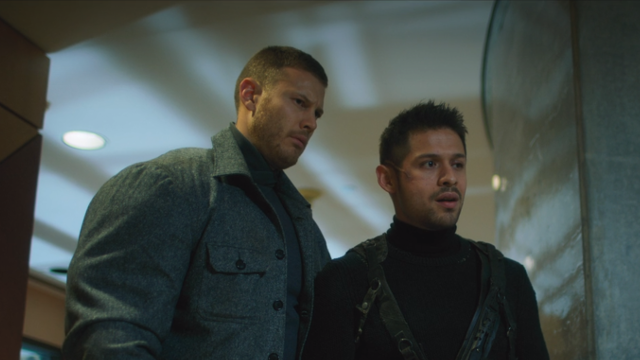 The moment I became aware of a series of comics written by Gerard Way of my chemical early twenties, there was never any danger of me being objective. I was going to love it, and I did. The show had some ludicrously large shoes to fill, and I was going to be equal parts indulgent lover and hyper critical fangirl – I am never above killing my darlings. But as I re-watch the series from tip to taint, I’m overwhelmed by how grateful I am for the show that’s been offered to us. After taking in the grander scheme the first time around, I am now noticing how carefully the story is woven throughout, the pipe being laid far out in advance of the clustercuss to come. And perhaps the greatest trick the devil plays on us is that while a lot happens in episode 4, all of it is now rooted in relationships and the characters, as they have been developed. Let’s take a look at the three biggest themes/developments of this episode, shall we?

Men and Their Secrets:

What we know – what no one else besides Pogo and Luther knows – is that Luther’s simian physique is the result of a mission gone wrong. He was effectively dead, and Hargreeves injected him with a serum that saved his life but made him part Martian gorilla. When Alison attempts to talk to Luther about what happened to him, he clams up. He cannot be open, even with the person he loves the most, because he is far too hung up on the notion of being Number One, the de facto leader and the embodiment of old school, conventional masculine ideals. Diego, meanwhile, is nurturing his own secret – that he turned Grace off as a sort of mercy kill, leaving Alison and Luther to believe that Cha-Cha and Hazel killed Grace. When he talks to Eudora, he retains his secrets, unwilling to be open with someone he cares about.

Diego functions best when he has a grudge, something to avenge. He would portray himself as a vigilante motivated by a desire to help people, but in reality, he just needs a mission. Any bad guy in a storm would do. Both Diego and Luther are bound to their own perceptions of what being a leader means, and they are so deeply invested in their pissing contests that they fail to really listen when an inebriated Five is trying to have an emotional conversation with them. Their inability to listen to him, to engage with him on a genuine, empathetic level makes them deaf to the very important information he is actually delivering to them. Poor Five is hopeless. Something the purpose driven little beast has not been up to this point. If Luther or Diego were able to truly focus on anything besides their competition, they would probably perceive that this is hugely important.

Sisters Are Doing Things for Themselves

I’m not going to turn this into a rumination on the feminist undertones on the show (I want to – believe you me, but I have some self-control) but it would be remiss to not mention the pitch perfect portrayal of complicated female relationships and how difficult but redemptive they can be. Perhaps it is because I have both a biological and an in-law sister who I am very close with, but the loving and challenging bond between Vanya and Alison rings truest of all the relationships on the show to me. They get angry at each other, but are quick to forgive – eager, even – and open with and to each other. They want to share with each other and to know each other. In stark contrast to the brooding secrecy of Diego and Luther, Alison and Vanya actually speak to each other. So when Alison goes to Vanya’s apartment to see her and instead sees Leonard creeping around like a real weirdo, she of course tells Vanya. And Vanya tells Alison in turn that yes, maybe Leonard is weird, but he’s nice, and it’s a good feeling to be wanted. And Alison listens. She hears her.

And Then There’s Klaus!

Who isn’t a theme, exactly, but he is a whole damn mood. I argued last recap that he may be the hero of the show, and in this episode he moves even closer to that distinction. We see that as a child, Hargreeves locked him alone in a mausoleum for days, so that ghosts inundated him. Tied up and tortured by Hazel and Cha-Cha, Klaus is ultimately able to use the very thing he feared as a child, guided by Ben (stealth MVP of the season), to strike a blow at his captors. He tells Cha-Cha that Hazel allowed loved ones of the people they’ve assassinated to live and escape. He fractures their partnership. Klaus, who conforms to no aspect of toxic masculinity, is completely forgotten by Diego and Luther, to the extent that twice when someone tells them that they have their brother, they only think of Five. He does not fit their mold.

So Klaus saves himself, with his power and his wits. When Eudora checks out the shitty motel he’s being held in, he knocks his head against the table until she comes in and sets him free, escaping through the vent with the time travel briefcase in hand. Unfortunately, Eudora is not as fortunate and is merc-ed by Hazel and Cha-Cha. I would normally object to fridge-ing such a rad female character, if it weren’t for the show cleverly twisting it to reflect more deeply on Diego. It was his urging to play by his rules, try the vigilante life that led her to going in alone. And despite loving them, Diego is ultimately the reason the women he loves keep ending up dead.

A Couple of Stray Observations:

Leonard steals Vanya’s meds and throws them down the sink.

Not a ton of Five this episode, but him drunkenly snuggling Delores and vomiting in Luther’s arms is magnificent.

The next episode is simply titled “Number Five.” Get excited.