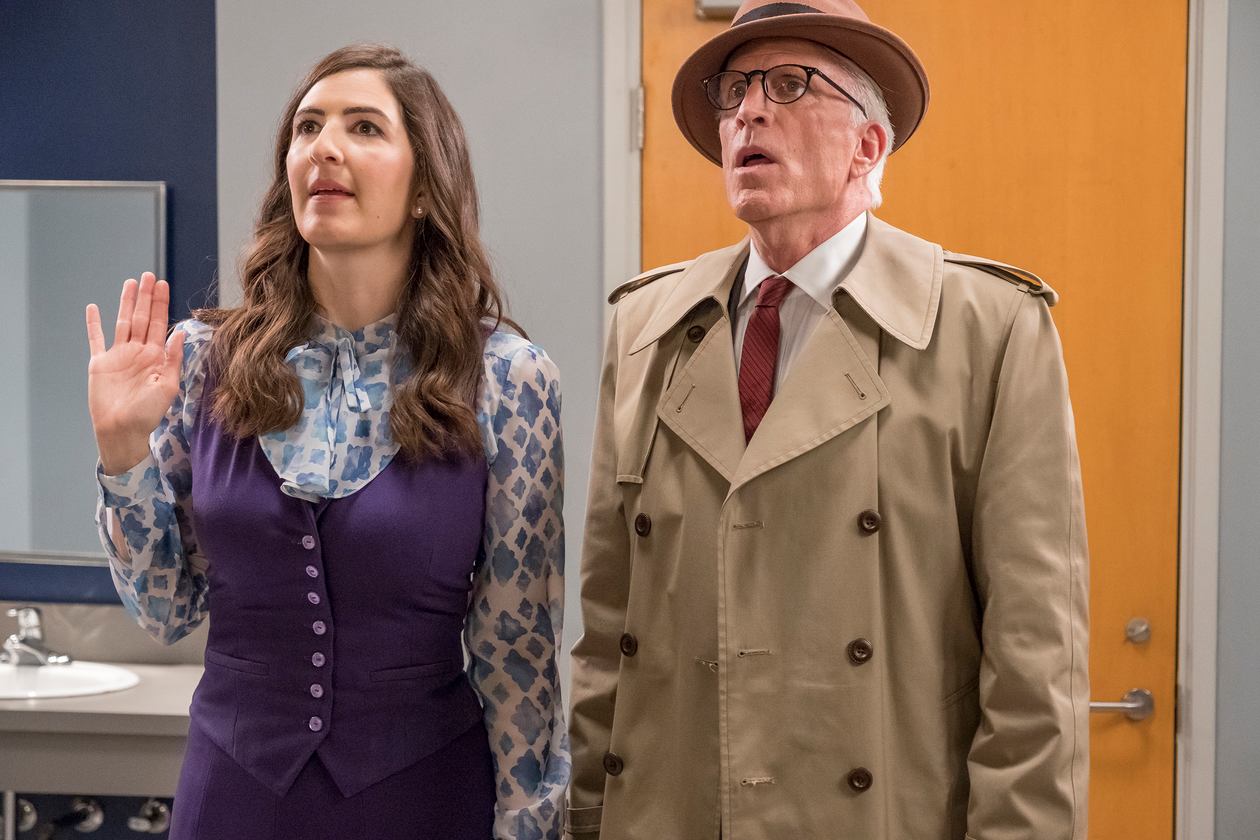 “Here’s the story of a blond-haired lady / Who was helping save three hell-bound characters.”

Several times in “The Brainy Bunch,” we hear Trevor make the same foreboding declaration: “Eleanor is the reason this is all happening.” Funnily enough, though this statement reminds us of Eleanor’s essential role as leader of the group, it comes in an episode that is constantly recapping the many flaws that made her a bad leader at the outset of the series.

It’s been a while since we’ve had a flashback to Eleanor’s pre-afterlife life, but the ones we received in season one spoke volumes about how she earned a spot in the Bad Place. Between her constant excuses to get out of being the designated driver for her group of drinking buddies, and, well, the entirety of the “Dress Bitch” fiasco, Eleanor’s point total was rightfully abysmal. Unlike the imaginary “Real Eleanor” (season two reveals her to be Vicky, the power-hungry if not overeager demon played by Tiya Sircar) who overcame being abandoned by her parents to go on to perform endless charity work in third world countries, the Eleanor Shellstrop we follow never got over the feelings of low self-worth inflicted by her absent parents, and instead turned to drinking and aggressive sarcasm to shroud that hurt. More than anything, her loner personality developed as a survival mechanism. In the many iterations of her time spent in the afterlife, she was able to overcome her trust issues and lead Chidi, Tahani, and Jason to the realization that the Good Place was nothing it claimed to be. Now that the show has hit the reset button yet again, we are witnessing an Eleanor who, in the year since nearly being killed by a hurtling train of shopping carts, has struggled alone with becoming a better person. So it is no wonder that she is having trouble adjusting to the group environment now, right as the overbearing Trevor comes to town.

While Trevor’s participation in the brain study causes immediate disruptions in the group’s chemistry—Chidi questions how close he can become to the test subjects, the high-class Tahani sleeps with low-brow Jason of all people, and Michael, convinced of his inability to interfere further in the group’s affairs for fear of being recognized, has no choice but to send Janet to infiltrate the group, posing as a waitress at the wonderfully-named Cowboy Skyscraper Buffet—his ultimate target from the outset is Eleanor. His very first words to her are that ominous declaration I referenced above: “You must be Eleanor, the reason this is all happening.”

Eleanor doesn’t want to call any extra attention to herself, and Trevor’s insistence upon her importance as the catalyst for the study is enough to make her want to quit it. We see glimpses of destructive personality traits that we haven’t seen since the last reset. When Chidi doesn’t agree to continue giving her the personal attention she craves every single week, she announces her plans to ditch the study for the day and instead spend the afternoon drinking until she passes out. After Chidi leaves the table at the buffet to ponder the doubt Trevor has sown in him, Eleanor realizes she would rather be alone than open up to this somewhat irritating group of strangers. It’s no surprise when the rest of the group reconvenes the next day for additional brain scans, and Eleanor bails on the study altogether. It is difficult to watch Eleanor make the same bad choices that she was making at the start of the show, but it also speaks volumes about the importance of the group dynamic in her own evolution. In a year in the false Good Place surrounded by Tahani, Jason, and Chidi, she became not only a better person, but a capable leader. In a year on Earth, she has made the effort to be a better person in everyday life but is still guarding herself from getting too close, or perhaps too attached, to others. Though Chidi convinces her to come back to the study by the end of the episode, it’s clear this season will need to spend additional time developing her into the caring, assertive leader she was prior to previous resets.

Can This Train Go Any Faster?

Yet, even if the show seems to be taking its time transforming Eleanor and the gang into the more familiar versions of themselves seen in afterlife, “The Brainy Bunch” packs in what could have been a season’s worth of plot points into a single episode. This certainly isn’t the first time that the show has burned through material at a surprising rate (remember Eleanor’s confession in the middle of season one? Or the several hundred resets that take place in a single season two episode?), but this is the first time that the pace has felt damaging to the overall story. I didn’t anticipate having Adam Scott around as Trevor for the whole season, but depicting his entire scheme in a single episode left several plot points unexplored, such as the group growing suspicious about the obviously non-human Trevor and Michael who keep showing unprecedented interest in their lives.

The quickened pace also left some jokes feeling clunky and awkward, including Chidi’s sleepless daze as he confronts Eleanor at her apartment (though, I will admit, the sight gag of Plato misspelled as “Palto” elicited a chuckle from me). Even the Cowboy Skyscraper Buffet should’ve been home to many more memorable jokes than merely the glamorous shot of the fried food buffet line and the loaded gun table marker, but there simply wasn’t enough time to develop it.

Worst of all, it seems that the episode only rushes through its story in service of the inevitable last-minute twist. Having the gang reunited in the MRI room would’ve been a great stopping point, but instead the final four or five minutes of the episode are dedicated to a confrontation between Trevor, Michael, Janet, and the Judge, who is fuming over how these beings have been excessively interfering in Earth matters. When Janet’s backlog of item requests that she could not fulfill on Earth suddenly begins to materialize on the celestial bridge that connects to the Earth portal, she and Michael make a dash back to Earth, potentially trapping themselves there forever. All of this is truly momentous in terms of where the story is heading, but that the entire conflict is crammed into a few minutes at the episode’s end is a disservice both to the major plot of the episode and the twist itself. At this point, the show has certainly earned the trust of its viewers, but I can’t help but wonder what the writers have up their sleeves that they could blast through this all so quickly.

With Michael and Janet returning to Earth, where their supernatural abilities have been established as unavailable, the weight upon Eleanor as the group’s leader is greater than ever. At the beginning of “The Brainy Bunch,” Michael calls Trevor “possibly the most dangerous creature in the universe.” By the end of the episode, Trevor is proved to be a rather ineffective blip on the group’s radar, easily dispatched with a flick of the Judge’s wrist. No, the real power of this show’s story lies with Eleanor. She’s escaped eternal torture, outwitted demons, helped transform at least one into a force for moral goodness, and even swayed the Judge’s decision as to the fate of herself and her friends. Even if she is feeling low right now, The Good Place wants us to know that rusty-bra-wearing Eleanor Shellstrop may herself be one of the most dangerous creatures in the universe.