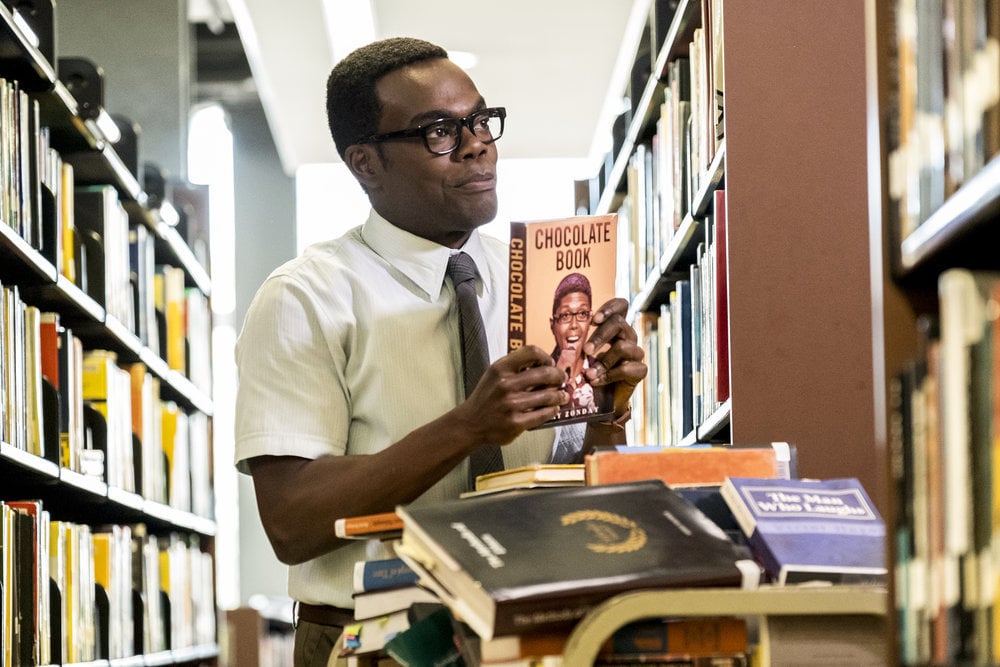 Since NBC’s The Good Place premiered in fall 2016, it seems that, anecdotally at least, the viewing progression has been similar for most fans. The show’s unique premise was its initial draw, cemented by the assortment of talented people behind and in front of the camera, even while the show found its comedic footing. The cliffhanger endings in each episode kept our interest in where the story was going and the plot and writing were able to meet in the middle and everything just clicked. Where that final step took place differs from viewer to viewer—for me it was Eleanor’s initial confession to Michael that she doesn’t belong in his handcrafted Good Place in “The Eternal Shriek,” but I know for some it took until the season one finale (and that twist) for all the pieces to really fit.

Now in its third season, The Good Place has cemented itself as one of the best sitcoms on television through its consistently witty, heart-filled writing, and its brilliant performances from veterans Kristen Bell and Ted Danson, and breakouts like D’arcy Carden and William Jackson Harper. The end of season two brought the celestial comedy back down to Earth after Michael (Danson) convinced the Judge (Maya Rudolph, who gets funnier in this role every episode) to allow our four human protagonists a second chance at living ethically-inclined lives. The season’s opening hour “Everything is Bonzer” may not be the show at its flashiest, but it breathes a well-earned confidence in its storytelling abilities. It takes its time reintroducing each character through the brilliant contrivance of Michael functioning as deus ex machina in the near-deaths of Eleanor (Bell), Chidi (Harper), Tahani (Jameela Jamil), and Jason (Manny Jacinto).

When Michael comes to realize that merely saving the four humans is not enough to permanently change the unethical ways they live, he deduces that the previous success of the group depended upon them all working together. Returning to Earth several additional times, against the explicit directive of the Judge, our favorite white-haired demon concocts a method to bring the group together again via a research study headed by Chidi in Australia. 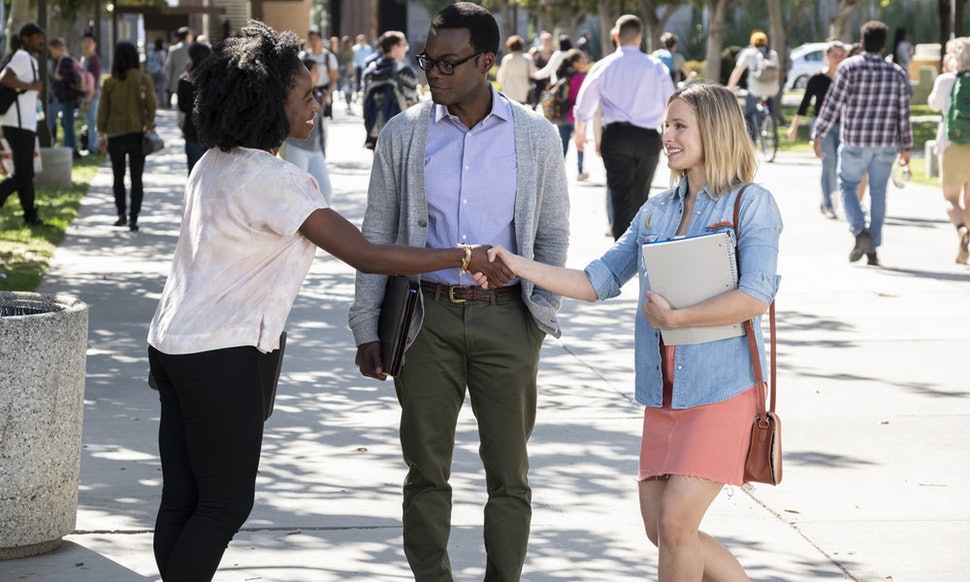 Newcomer Kirby Howell-Baptiste instantly finds her place in the cast as Simone, a young neuroscientist with the right amount of determination to keep Chidi on track and the right amount of sass to keep up with Eleanor’s banter. The fantastic scene of Eleanor and Simone grilling Chidi, presently undergoing a brain scan in the MRI machine, into asking his colleague out for dinner is itself worth the new character’s addition. Though Jen Statsky, who co-wrote the episode with series creator Michael Schur, insists that the show is not heading toward an Eleanor-Chidi-Simone love triangle, there was a palpable tension in the air when the two women first meet. However, this could merely be a manifestation of the territorializing way we have seen Eleanor approach friendships. If the first season flashback sequences revealed anything about what made Eleanor such a bad person on Earth, it’s that her neglectful parents set her up for the trust issues she now struggles with.

By the end of the hour all four of our protagonists are reunited, and it seems like the show has all its puzzle pieces in perfect working order—the characters are still marvelously written and performed, the dialogue is snappy as ever, the humor is sprinkled in throughout (especially through Jason, who has become, for the better, the show’s primary pun delivery device), and, perhaps more than ever, the show bears its heart on its sleeve in Michael’s selfless attempts to get his friends into the real Good Place.

And then in the episode’s final moments, notorious bad boy demon Trevor (Adam Scott) shows up unexpectedly in Australia, and The Good Place reveals its Achilles’ heel.

Are the Cliffhangers Getting Old?

Throughout the show’s first season, cliffhanger endings were the crutch that kept viewers like myself on board with Mike Schur’s vision. Even if I came out of an episode feeling indifferent or worried that the show was quickly running out of steam on its bizarre premise, the writers would suddenly drop a lightning bolt twist in my lap—the silent monk Jianyu revealing himself to be Jacksonville hip-hop dancer Jason Mendoza or Michael announcing his retirement from his Good Place project—that would bring me back on board for another episode.

When the show reinvented itself with the first season’s finale, it allowed season two to back off of the extreme twists. It turned instead toward plot developments that, for the most part, did not blindside us or keep us in the dark. For instance, Michael’s last minute request to ally with the humans at the end of “Dance Dance Resolution” is effective because we have had opportunity to witness this demon be crushed repeatedly by reboot after reboot, seeing his pet project fail hundreds of times in a row. Where season one’s twists felt so unexpected because we had no insight into Michael outside of the face he showed to Eleanor and Co., season two’s twists relied on our knowledge of who Michael actually is and the suspense that could be built with the vested emotional interest we have gained by following these characters for a couple of seasons.

But introducing Trevor at the last-minute of “Everything is Bonzer!” feels like a return to the show’s initial use of cliffhangers as bait to reel viewers in for another week. It doesn’t help that at this point the last-minute plot developments are baked into the show’s DNA. As soon as the credits start rolling on the bottom third of the screen, my mind automatically knows to expect something loony to happen. Have you ever gone into a film expecting a twist because a friend told you there’s a big one in there at the end? The effect of any big twist is greatly diminished when it can be forecasted from a mile away, and unfortunately this one doesn’t bear any real emotional resonance to be mined either. Trevor is just a swaggering demon we met in season one. Had it been, say, Michael’s former boss Shawn coming to earth (something the episode seemed to be leading to until its last-minute turn), perhaps I would be more invested, if only for his history with Michael. As it stands, Trevor functions solely to produce an immediate source of conflict for our protagonists, albeit one that is bound to be entertaining given Adam Scott’s prodigious ability to play jerks. But to introduce that conflict at the end of the hour feels like a cheap shot for a show that did so well with earning its cliffhangers last year.

It’s hard to fault a project so dedicated to surprising its viewers for tacking on a cliffhanger at the end of an episode. But it’s also frustrating to know that though the show has matured so rapidly in many areas, it’s been unable to move past this one. The cast is firing on all cylinders now, especially underdogs like D’Arcy Carden, Jameela Jamil, and Manny Jacinto. The writers have found a sweet spot between comedy and drama. The jokes are funny, and the emotional beats are executed flawlessly. But if The Good Place wants to continue to surprise its audience, perhaps it ought to take a break from trying to surprise its audience.