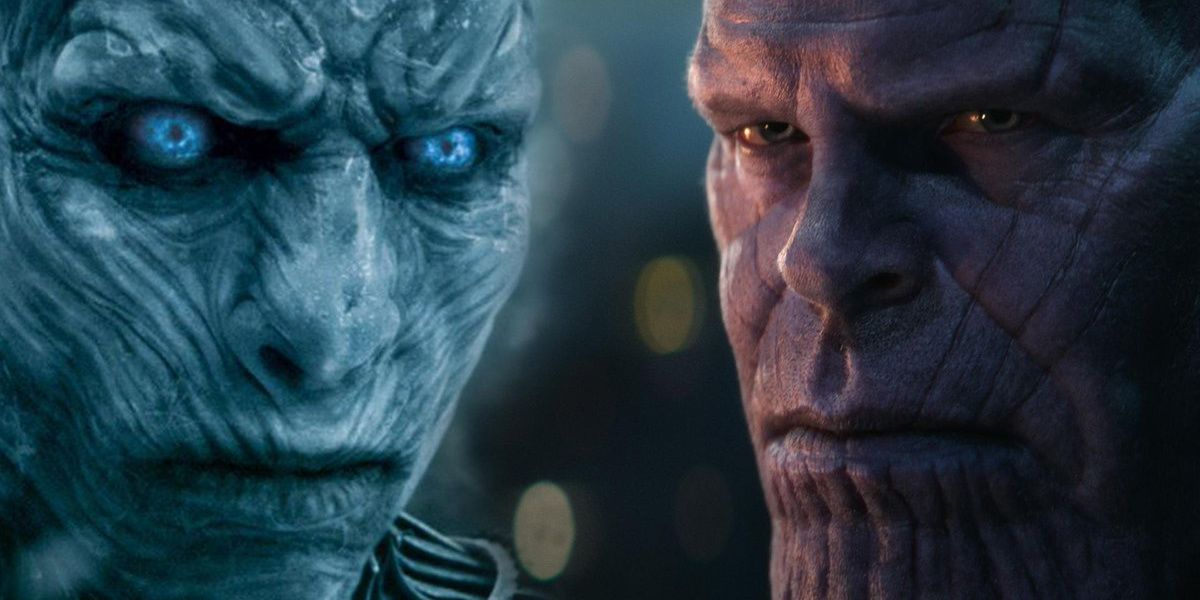 With the film studios delaying their blockbuster films and TV networks filling the air with celebrities singing from their living rooms, it’s easy to forget that just one year ago we were treated to a truly unbelievable convergence of geek culture. On Friday April 26, 2019, Marvel unleashed Thanos in Avengers: Endgame just two days before HBO aired the epic showdown between the White Walkers and our heroes at Winterfell on Game of Thrones.

Both events saw the final confrontations with villains that were being teased and built up for the better part of a decade. Fans expected bloodshed and tears were likely. Yet we tuned in to both in record numbers. Avengers: Endgame is the highest grossing film of all time earning $2.7 billion. Game of Thrones has won the most Emmy awards of any drama series ever. That’s on top of being immeasurably popular.

Superhero stories and medieval fantasy are most easily linked by their fanbases. I remember last year I had a friend pose a question on social media. If you had to choose between Avengers: Endgame and Game of Thrones season 8, which one would you watch? The idea of it felt like a great injustice to me. I had invested years watching and rewatching both franchises. (Not to mention writing recaps for this website.) Luckily it was just a hypothetical question and both aired without a hitch. Well, sort of.

The Battle of Winterfell

The 70th episode of Game of Thrones aired on Sunday April 28, 2019. “The Long Night” presented the first real warfare of GOT season 8. With the vast majority of the show’s cast converged on Winterfell, the Night King, the White Walkers and the army of the dead all lingered in the shadows right out of sight. Even though the battle with Queen Cersei and King’s Landing was still to be decided, it could be argued that this was the more important… and compelling… conflict. The episode brought some iconic images with the Dothraki arakhs going up in flames then slowly being snuffed out by the zombies. Jorah Mormont, Berric Dondarrion and Theon Greyjoy all sacrificed themselves to protect others. Or how about the grand finale? Here’s how I put it one year ago in our recap.

Jon is trapped in the courtyard by the ice dragon while attempting to get to Bran. Dany is out with Jorah, our various knights and warriors are in the courtyard. This is it. The Night King and Bran stare at each other. Are they going to talk? Nope. It’s Arya FROM DOWNTOWN. Emerging over the Night King’s shoulder with a war cry and a Valyrian steel dagger, Arya freakin’ Stark makes her move. The Night King grabs her by the throat. She drops the dagger, grabs it with her other hand and stabs the Night King in the gut. He shatters into a million pieces. The other White Walkers shatter, the army falls, and it’s done.

Even with these heroic moments, the resolution does seem to come easier than expected. Also Jon and the Night King stared each other down for years only to have Arya kill the villain. The lasting legacy of the episode lies with director Miguel Sapochnik’s choice to mute the look of the production with deep shadow and darkness. In some scenes, it’s quite difficult to see.

Avengers: Endgame is the 22nd film in the Marvel Cinematic Universe. The movie poster looks like you Googled “movie star” and these were the results. But beyond the star power was the fact that 11 years of superhero movies converged to end multiple story and character archs. 2018’s Avengers: Infinity War and Thanos’ iconic snap saw half of life in the universe dissolve away. In this follow up, a team that includes the original six Avengers plus some other survivors travel back in time to gather the infinity stones from the past and snap those who died back into the land of the living. Like with Thrones, there were emotional character deaths and some twists and turns. How about Captain America’s climactic “Assemble” call to arms as the weight of the MCU emerges from their portals? Just thinking about it makes me want to rewatch all the movies.

With Marvel’s signature brand of action and comedy, the film was met with generally positive reviews and fan reactions. Not many franchises can successfully balance drama like the opening scene where Hawkeye watches his family dissolve away and comedy like Thor’s new “dude” lifestyle. Yet Endgame does just that. The audience expected the most epic movie ever made when they headed to theaters in droves. Somehow Marvel delivered.

The MCU released three films in each of the previous three years. So it feels odd to see their next release as Black Widow in November. Originally slated for May 1st of this year, it was delayed because of Coronavirus and the related shutdown. That means we’ll see a span of 18 months with just one MCU film hitting big screens. That was last July’s Spider-Man: Far From Home. While it fits in the continuity right behind Avengers: Endgame, Far From Home very much feels like a standalone project without major implications for the other Avengers characters. Black Widow is a prequel origin story. So when will we get to see what the next phase of the Universe will look like?

Our best bet has to be the upcoming Disney+ TV series that will feature some of our well-established characters. August will see The Falcon and the Winter Soldier released. Then in December will be Wandavision and Loki in early 2021. Although production delays will likely mean that timeline is in flux. Who will be the next Thanos level supervillain? What will the new Avengers look like? We’ll have to wait and see.

After “The Long Night,” the final season of Game of Thrones played out to big ratings. It went on to win twelve Emmys including best drama series. However, it would be generous to say the final three episodes received mixed reviews. Critics and fans largely viewed the episodes, and the season as a whole, as rushed and disappointing while acknowledging the impressive production value. Show creators David Benioff and DB Weiss have not done much to defend their divisive creative choices since.

Since the finale, all has been quiet in Westeros. But there has been some news. A prequel series taking place during the Age of Heroes filmed a pilot starring Naomi Watts. However it was announced in October that wouldn’t be moving forward. A separate series known as House of the Dragon following the early Targaryens in Westeros was picked up for a 10 episode first season with HBO. We can hope to see that at some point in 2022. On the literary front, fans are still waiting for any news regarding the long delayed “The Winds of Winter,” the sixth book in George RR Martin’s “A Song of Ice and Fire” series. The last entry, A Dance with Dragons, came out in the same year as the TV series’ first season, 2011.

We have no way of knowing if the Marvel or Westerosi universes can ever again reach the heights they achieved in April 2019. It was a time when two franchises perfectly captured the zeitgeist enthralling not only sci-fi and fantasy fans but audiences from all walks of life. Was there some type of inexplicable convergence facilitated by George RR Martin from his home in New Mexico and the then recently deceased Stan Lee? More likely it was just a coincidence brought about by entertainment executives scheduling their hits to come out when audiences were most likely to watch. No matter the reason, it was a special weekend last spring. We can only hope to one day see the stars, and pop culture, align signaling the return of the geekuinox.