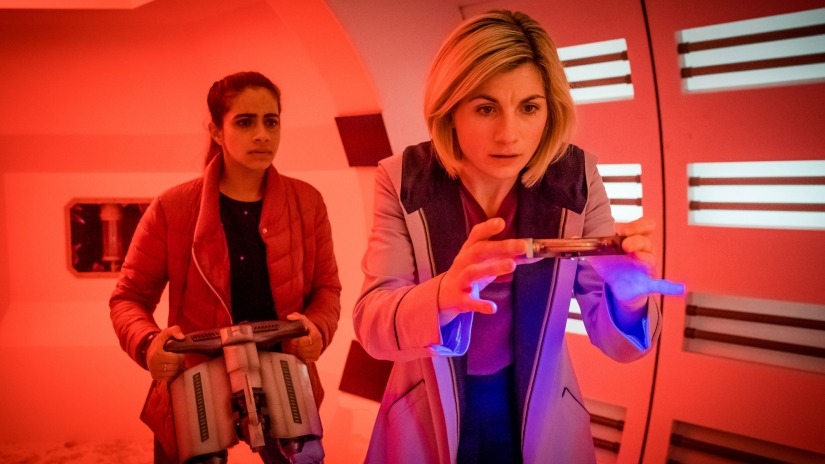 We knew from the start that this season of Doctor Who was going to be one to remember. Casting a woman to play the Doctor for the first time in the show’s history was historic, and it couldn’t have come at a better time.

But huge changes to popular shows often come with equally huge risks. Will the new Doctor be well-received? Will the show live up to the hype? That’s the problem with introducing the “first” of something—if it doesn’t work, there’s a good chance that there won’t be a “second,” and all the progress that’s been made gets forgotten as things revert to the status quo.

This week, the writers seem to be letting us in on what they must be feeling as “The Tsuranga Conundrum” introduces us to a decorated female pilot who has risen to the top of her field. But she has a condition known as “pilot’s heart,” which basically means that her heart can’t handle stress. And that could be perceived as weakness if word gets out. And she’s not just afraid that her own reputation would be tarnished—she’s worried that all women pilots would be taken less seriously as well.

And that’s probably similar to what showrunner Chris Chibnall and his staff must be feeling. If this season isn’t at least as good as previous ones (where men have always played the Doctor), people might assume that having a woman in the role is the real problem. So I’m sure there’s a lot of pressure to make each episode, and the entire season, a stellar one.

To be honest, I just don’t think the writing has quite measured up to previous seasons so far. This week’s episode is a good example of that. Don’t get me wrong—General Cicero’s story is heartwarming, and her courage fits in with the overall narrative of the season in a very cohesive way. And the little Pting is as adorable as he is terrifying. Plus, watching a pregnant man give birth with the assistance of two other men is fascinating, and it also challenges traditional gender roles (as DW has done the entire season).

But when you compare the stories and the “monsters” of Season Eleven to the ones we’ve seen in previous years, there just doesn’t seem to be a lot there. The ideas themselves—paying homage to one of the most courageous women in American history, for example—have been great. But, with a few exceptions, the substance just seems to be lacking.

Maybe it’s just me. Maybe I just really want to see Jodie Whittaker face off against a few Daleks or an army of Cybermen rather than the one-dimensional antagonists we’ve seen so far. Or maybe those little potato-headed Sontarans. The creatures she’s battled so far just don’t seem as interesting by comparison.

(Again, don’t get me wrong—I’d watch the hell out of a spin-off show with that little Pting guy and several of his friends. Those things are awesome. They’re so cuddly-looking that you’d instinctively reach out to pet one, and then it would chew your arm off. Followed by your face. But it’d look so CUTE doing it.)

But is that such a bad thing? Because I want to be perfectly clear—Whittaker has been doing an incredible job manning the TARDIS this season. The fact that I’m not thrilled with recent episodes has nothing to do with her at all. She’s as funny, quirky, and capable as any of the men who’ve played the role, and she’s added her own unique style to the Doctor’s personality to make the current incarnation both familiar and surprising. She’s great.

And so what I don’t want to see is people making the assumption that, if this season doesn’t work out, it’s because they cast a woman in the leading role. I would argue that she’s actually elevating the material she’s being given and making the best of it. Because, in spite of everything I’ve said to this point, I still love the show. And it’s still a very good show. I just think it could be better. Whittaker and her cast mates deserve better material.

So let’s start with a better class of villain. Bring back the Daleks!