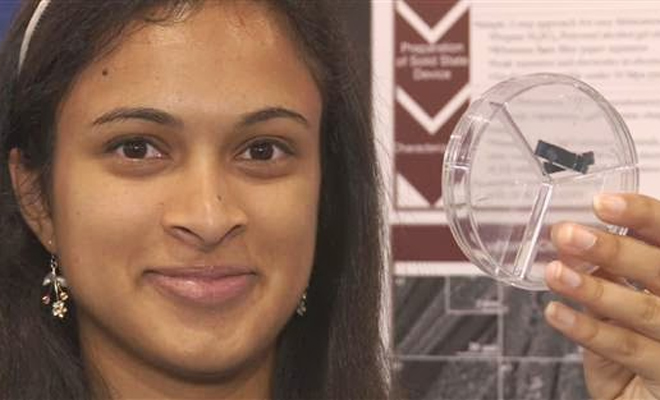 A high-end technology gadget has been developed by a Californian teen that could recharge a cell phone in 20 seconds.

18-year old Eesha Khare from Lynbrook High School in California, participated in Intel International Science and Engineering Fair (ISEF) and won herself a major science award that will grant her an opportunity to study at Harvard University. She amazed the judges panel with her tiny gizmo that can recharge a cell phone in 20 seconds.

According to Eesha, the tiny black, rectangular device can charge any phone’s battery within 20 to 30 seconds. This could completely revolutionize the cell phone industry. The tiny gadget is a type of a supercapacitor that can hold a big amount of energy in a small space.

This is what Eesha had to say about her new invention, via KPIX 5:

I developed a new supercapacitor, which is basically an energy storage device which can hold a lot of energy in a small amount of volume, – Khare further told KPIX 5. If this is not impressive enough, the technology may also be able to speed up charging car batteries.

The award will grant Eesha $50,000 in funds to help her continue her education at Harvard University, where she’ll be heading this fall.

This type of invention is a crucial need for mobile technology, which continues to grow each day. The ability to charge your phones in less than a minute can prove to be really useful, and of course, save a lot of time. We hope she gets all the help needed in bringing this tech to the market within the next few years.

The tiny device will sit inside your phones battery and will help charge it in 30 seconds or less. This invention can also be used to charge car batteries. According to reports, She has already received some attention from the Tech and search giant, Google.

How long does it take you to charge your cell phones? Would you prefer a device that charges your phone in less than a minute? Shoot us a comment below.

Xbox One – It’s Not All Bad

I’d love this. My htc barely gets thru 14 hours after my jellybean update.

ShashankBhardwaj I feel you, man! 😀
My Gnex’s battery used to be crap but after installing CyanogenMod, I’ve seen drastic improvements in the battery life! or maybe, it’s just my imagination!

This is just BS.  There is no known device that has the energy storage capacity of a lithium-ion battery.  No capacitor, that would fit inside of a cellphone, can store enough energy to power a cellphone.
Showing a charged capacitor powering an LED proves nothing.
Show me a capacitor powering a cellphone and I will believe it.
Sincerely,
Don James, Electrical Engineer