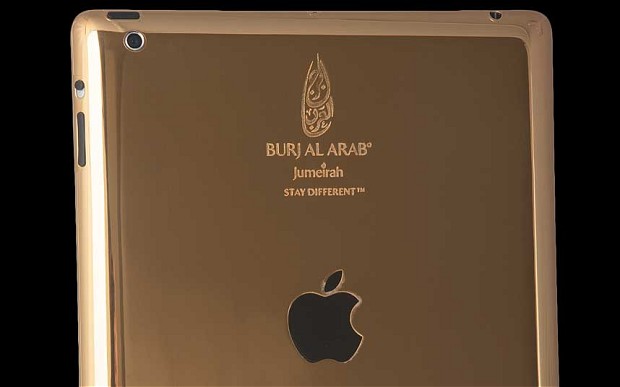 Dubai just cannot get enough of its extravagance. Known for its riches and luxuries, the Arab city’s Burj Al Arab hotel has taken one step, or multiple steps further to pamper its guests – gold iPads upon check-in. 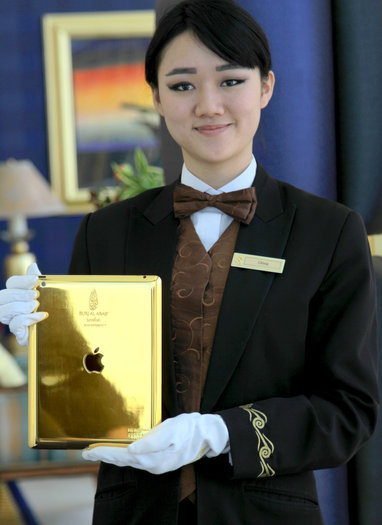 The Burj Al Arab in Dubai is widely referred to by people as the ‘world’s only 7-star hotel’, although no such rating exists, and the hotel itself claims to have never advertised itself in such a way. It also regularly shows up in listings of the most luxurious hotels in the world, and is frequented by many celebrities.

Owned by the Jumeirah group of Hotels & Resorts, rooms at the Burj Al Arab start at a staggering $1500 a night, and customers are pampered with a an underwater aquarium restaurant, a rooftop tennis court that is also a helipad, chauffeur services for a Rolls Royce, and a private beach. A relatively small addition now, is the  gold iPad.

The iPads, made of 24-karat gold, which guests can use during their stay at the hotel, have been manufactured by Gold & Co. London, and were designed exclusively for the hotel. Each iPad has been engraved with the hotel’s logo and the parent company’s moto – “Stay Different”. Of course, there’s Apple logo right at the center too.

Each iPad is a third-generation 16 GB Wi-Fi model. Currently, the iPads only run on a pre-installed Interactive Customer Experience software, but the management is working on expanding access to other iPad applications for the guests. The ICE software allows the iPad to be used as a virtual concierge, providing access to hotel services and other information.

The gold iPad isn’t the only form of extravagance found at the hotel. Burj Al Arab already provides iMacs to its guests in every one of its 202 luxury suites.

The gold-plated iPad is the ultimate in luxury accessories. It was a natural step to be paired with Burj Al Arab, the world’s most luxurious hotel – Amjad Ali, CEO of Gold & Co. London

If you wish to take home the gold iPad, a 64 GB version is available for purchase at the hotel’s Bespoke Boutique. It starts at $10,200 only, and is sold alongside other items such as a gold iPad mini, a gold iPhone 5, and a Blackberry Q10, again in gold.