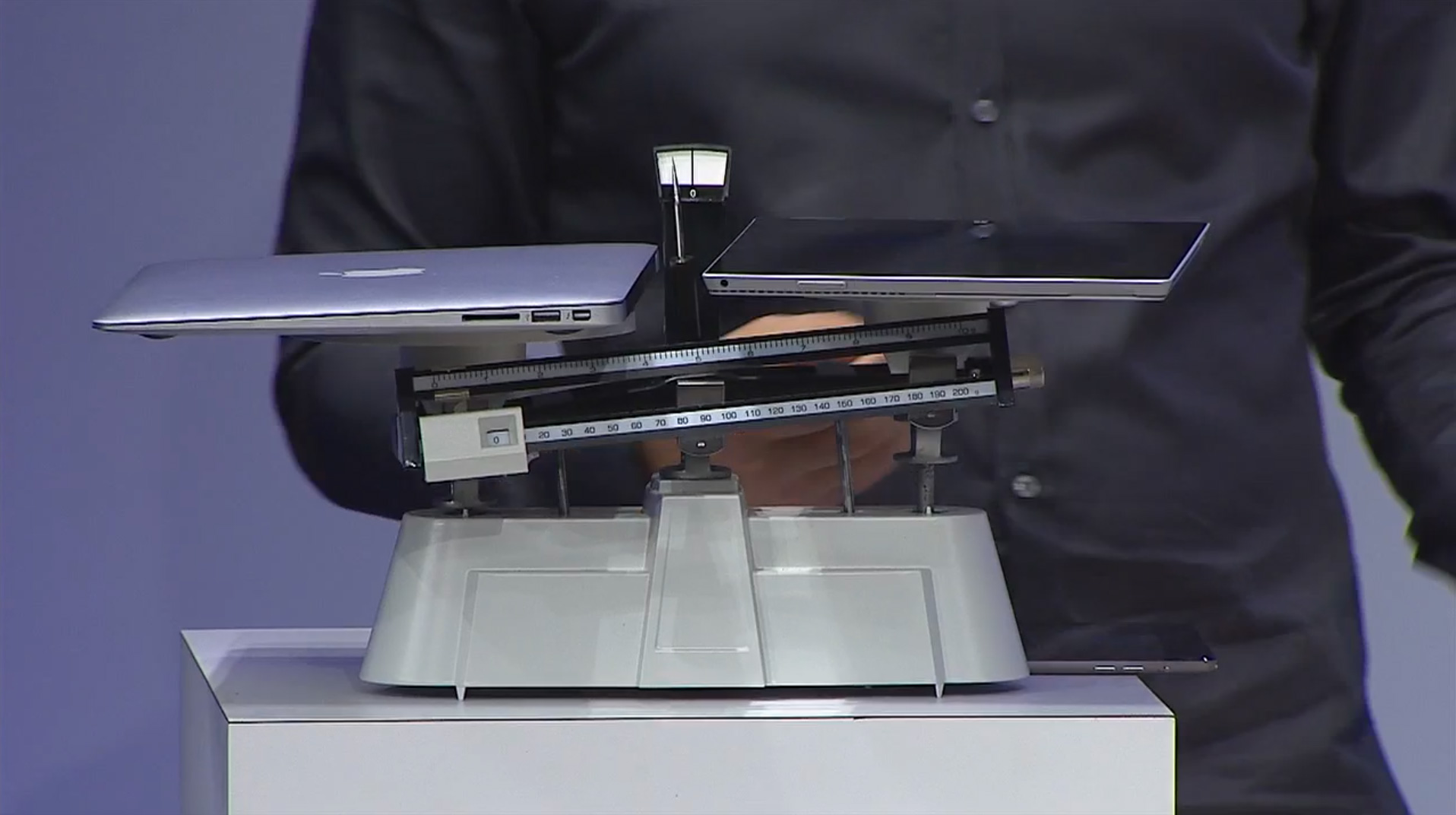 Microsoft has been making steady improvements to its Surface line with each iteration of the device. In its latest version, the Surface pro 3, Microsoft manages to blur the line between laptop and tablet even further. The question is, will the design, portability, and ecosystem of the device, be enough to sway consumers from buying well established alternatives like the Macbook Air or the Lenovo Yoga 2 Pro? Read on to find out.

The Surface Pro 3 is a beautiful device. It is thinner and lighter than its predecessor, the Surface Pro 2, weighing in at a little under 2 pounds. Not only has a significant amount of the heft been reduced, but the screen size has been increased. The screen is now 12 inches, and comes in at a resolution of 2160 by 1440.  The additional screen real estate, along with the 3:2 aspect ratio, makes this device feel much more like a productivity machine. In addition, the Surface Pro 3 has expandable storage by way of a micro SD slot, similar to what many android smart phones have.

Another update in this version is the surface pen, which is a joy to use. It is extremely responsive, considering the tech behind it was swapped from Wacom to N-Trig. The pen is a little heavier, but feels good in hand. It is excellent for taking notes.

A big difference in this generation is the vastly improved kickstand. In the previous generation, the kickstand would only allow the user to switch between two positions. With the Surface Pro 3, the kickstand can now go anywhere from 22 to 150 degrees, making this device much easier to use on ones lap.

Speaking of using this device on your lap, it wouldn’t be much of a laptop without a physical keyboard.  The Type Cover keyboard has also been updated. It now features a magnetic strip at the top edge of the keyboard, which allows it to snap to the bottom of the Surface, providing additional stability when using the device in lap. The Type Cover’s footprint has been increased to match the increase in size of the Surface Pro 3. Unfortunately, Microsoft continues to promote the Type Cover keyboard as an additional accessory, instead of bundling it with the device, which will be something to consider when shopping for a new device.

When Microsoft introduced the Surface Pro 3, it claimed it would be the device to replace the laptop and tablet. Shots were fired across Apple’s bow, as Microsoft took aim at the gold standard for laptops, the Macbook Air, making direct comparisons with the device. Let’s take a closer look.

The Macbook Air is a beautifully crafted aluminum device.  It comes in several configurations, ranging from the entry level 11 inch machine, which retails for $899, and comes with a core i5 processor, 4 GB of RAM, and 128 GB of hard drive space. On the opposite end of the spectrum we have the higher end 13 inch model, which, when configured to maximum specifications (i7, 8GB RAM, 512 GB hard drive) retails for $1,749. It brings with it a backlit keyboard, and arguably the best trackpad on the market, but also a lower resolution screen (1366 by 768 for the 11 inch model, and 1440 by 900 for the 13 inch model).  The 13 inch model has expandable storage by way of a full SD card slot, as opposed to the micro SD slot found on the Surface.

When describing the Lenovo Yoga 2 Pro, it doesn’t feel as premium as either the Surface Pro 3 or the Macbook Air. But what it lacks in aluminum/magnesium alloy, it makes up in utility. The Yoga 2 Pro gets its name from the many modes it can take. The keyboard can be flipped backward to convert the device into a tablet, albeit a heavier one. It weighs in at a little over 3lbs and comes with a 13 inch screen. It also has tent, and stand mode which come in handy for any Netflix marathons you may be running. The screen is absolutely amazing. It packs in an incredible 3200 by 1800 screen resolution. The lower end 13 inch model comes equipped with an i5 processor, 4 GB of RAM, a 500 GB hard drive, and is priced at $849. The higher end Yoga comes with an i7 processor, 8 GB of RAM, a 256 solid state hard drive, and is priced at $1,199. The Yoga also has expandable storage by way of a full SD card slot, like the Macbook Air.

Making an i7 to i7 comparison, Microsoft’s device will retail for $1,949, a $200 premium over Apple’s high end Macbook Air, and a jaw dropping $750 premium over the Yoga 2 Pro. Bear in mind that these prices do not account for the Type Cover, which is an additional $130 to tack on to the Surface pro 3.

If we look at this from Microsoft’s perspective, they have priced this device to compete with both the Macbook Air AND the iPad. So, if we run the numbers with this in mind: An entry level Macbook Air+iPad=$1,398. Microsoft is the more economical choice at $799 ($928 with the Type Cover). On the higher end, we are now looking at $2,248 for Apple vs. $1,949 ($2,078 with Type Cover) for Microsoft.

If you are a budget focused consumer, the Yoga 2 Pro might be your best option. If you prefer the traditional laptop, quality hardware that will last, and don’t mind carrying a tablet for play, the Macbook Air might be more to your liking. And If you don’t mind paying a bit of a premium with the additional Type Cover, and appreciate being able to jot notes down with the surface pen, which could be appealing to many students, the surface is the way to go. It is an exciting time in the industry when you have so many great options to choose from.