Remember Wesley Crusher? He was that kid on Star Trek the Next Generation (TNG) who, even though he was surrounded by Starfleet specialists with training and years of experience, would always swoop in and fix the problem that the “stupid adults” weren’t able to tackle. Fans of the original Star Trek couldn’t get on board with how this squeaky, oily kid would possibly know more than the Chief Engineer or the Helmsman or *gasp* the Captain! For many it was four years of eye rolling and groans whenever he came on screen. Until that glorious day when it was announced that Wesley Crusher (now a full Ensign, without ever going to Starfleet Academy) would be in fact getting the training that he so needed at that fine institution. After that, (minus a few occasional guest appearances on the show) Wesley Crusher was no more. For me, that also meant the actor playing him seemed to disappear off the face of the planet.

One day, many years later and somewhat out of the blue I was watching  a show called The Big Bang Theory and all of the sudden he was there. “Holy crap! Wesley lives!” I said to myself. Then, a very short few years later, it seems like he’s everywhere. The world had changed from when Wesley was hated on TNG…now was the time of the Geek and we just found our God!

Wil Aloysius Wheaton (not his actual middle name…but come on how amazing would it be if it was!) started acting from a very young age in various commercials but it wasn’t until an adaptation of a novella by Stephen King, and directed by Rob Reiner, did he really begin to get attention from Hollywood. 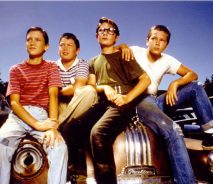 Full disclosure: this is one of my all time favorite movies. It’s such an explosion of nostalgia. Anytime I watch it brings me right back to 12 years age, because it has so perfectly captured what it’s like to be a  boy who is just on that cusp of teenagedom. It’s that odd point when you’re beginning to notice girls but also want to keep playing with your action figures. That age is a simpler and yet far more complicated one. With this all star cast (River Phoenix, Corey Feldman, Jerry O’Connell, Kiefer Sutherland, John Cusack AND Richard Dreyfuss) Wil Wheaton’s Gordie Lachance truly was able to stand above and be that centre of attention with his perfect embodiment of that awkward uncomfortable age. The decade in which the movie was set didn’t matter, 12 year old boys are the same in the 50’s, 90’s or today. It was here that you can see the stirrings of a great performer who needed just some time to age and mature. Stand By Me is a great movie that really should be seen by all.  That leech scene though…still makes my stomach quiver…seriously you pulled that leech from where!? 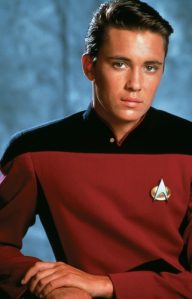 I am a fan of Star Trek, not a super fan mind you, but from a very young age I would sit with my Dad and we would watch the original show that was in syndication at the time. I was too young to really understand what was going on but I remember the show being exciting, and fun. Then just a couple of years later we began to watch TNG. What can I say that hasn’t already been said? This became MY Star Trek. I would end up enjoying ALL the others (yes even Voyager and Enterprise and I don’t care what you haters have to say) in some degree or other but TNG was mine, and Wesley Crusher was part of that. Ahh Wesley; yes he was hated, yes there was dancing in the streets when he left. But here’s the rub, a lot of people began to associate Wil Wheaton WITH Wesley Crusher. Haters are going to hate and even though there wasn’t the internet back in 1990 people would still act like trolls. They would write to Wheaton declaring their hate not for Wesley but HIM because he was who was seen acting AS Wesley. Now imagine, if you will, that as an 18 year old being on the brunt end of all that unfounded visceral hate. What would you have done? Wheaton dealt with it the best way that he could have, by trying to distance himself from that character. In doing this, he felt that he had isolated himself from that TNG family. A feeling he would continue to have until many years later at a panel for the Calgary Comic and Entertainment Expo, where he was finally able to express his sorrow for leaving, and his symbolic return to the cast. Shortly after leaving TNG, the acting gigs started to dry up and thus began Wheaton’s removal from the camera. But before he left TNG on one of his last guest episodes he got to make out with pre-famous Ashley Judd. Lucky bastard.

Until Wheaton’s return in the Great Geek Age that we found ourselves in, he just dropped off the radar for me. I honestly didn’t think much about him. Sure I saw him in that horribly awesome Toy Soldiers, where he gets a bad-ass yet stupid death scene, but as far as I knew he just went and did other things. Honestly I forgot all about him unless I watched a rerun of the first few seasons of TNG. But he was actually very active. He did change his focus a bit from camera acting to voice and undoubtedly you’ve heard him: GTA: San Andreas, Ghost Recon, Teen Titans and Ben 10: Alien Force. Frankly, if you take a look at his filmography he was actually working very regularly, but nothing that was really in the main stream. It was also during this time that he was becoming more comfortable with his “geekiness” as it came to his career. Always a gamer, Role Player, and Dungeon Master; Wheaton began to create a presence for himself online, starting a blog called…no joke: Where’s my Burrito, which eventually morphed into the website www.wilwheaton.net that he has today. Then all of the sudden in the year of our Geek Lord 2009 something amazing happened.

2009 was THE beginning of the 2nd wind for Wheaton. It all began with the internet based show The Guild where he worked with, soon to be partner Felicia Day, and then a few short months later came the guest starring role as an evil form of himself for the hit The Big Bang Theory. This has been happening more and more recently when a forgotten star finds an avenue to make fun of himself and thus resulting in a new found popularity, Neil Patrick Harris did it in the amazingly funny Harold and Kumar movies and now Wheaton. But he didn’t stop there. Not being content with simply a few guest starring roles on the most popular shows, he took it one step further. He took his love of tabletop games to Geek and Sundry, a website dedicated to, well, all things geek and sundry. As a testament to the profound popularity of Wheaton and tabletop games, in a recent Indiegogo campaign to fundraise for their 3rd season, they ended up raising $1.4 million, that’s almost 200% OVER their goal of $500,000 with 22,000 funders. Way to get behind something geeks! And finally where does that bring us? Wil Wheaton has his own comedic talk show on Syfy called The Wil Wheaton Project. This new show focuses on all things geek, including new movies, shows, events and invention; essentially all the things that Wheaton himself loves.

Gone are the days when Wheaton has to hide his Geekiness, the Geeks have inherited the planet. We now can stand up and not fear the reprisals of those around us, because we like RPGs or we like to analysis the newest gadgets. No! We have become the mainstream.

Wheaton was asked to speak in a recoding for a newly born child at a convention that sums up what it is to be a geek and nerd:

Wil Wheaton has gone on a wild journey. He’s gone from awkward child star, to heart throb, off mainstream entertainment, writer, speaker and now poster boy for all things Geek. How should we emulate the Great Wheaton? Well like he said: we must be honest, honourable, kind and work hard, and above all don’t be a dick.

So I say to you..with no fear of reprisal…everyone hates Wesley Crusher? No…I didn’t, I always liked him.

Allen is a lover of films. From the cheesy Roger Corman schlock to more complex films like Cloud Atlas, he is willing to dig deep to find the good and the bad in all movies. His blu-ray player is usually spinning sci-fi and horror but is willing to watch anything...except Marley and Me...Come on! Any one who can watch that movie and not cry buckets isn't human! Give him a glass of scotch and Firefly on the TV and he's in heaven.