Sponsored Post: Gorilla Glass Redefines How Much Trauma Your Phone Can Take 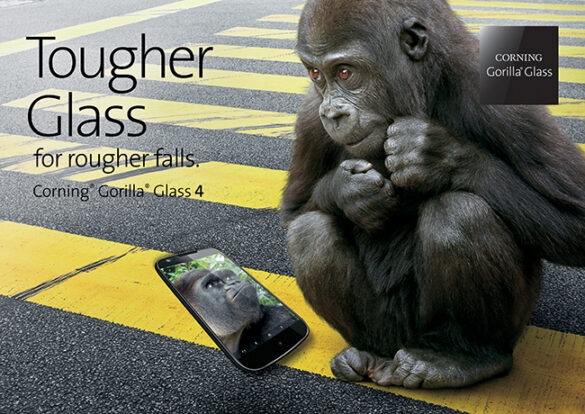 The world is cruel and heart-wrenching at times. Mere twists of fate tear your precious, fragile phone from your hands and it toss it to the ground, causing it to shatter…just like your dreams… Even worse is when the gorillas do it to you…

Corning has just released its new Gorilla® Glass 4. This glass is up to two times stronger than any of the other types of glass covers out there. Corning scientists studied tons of broken devices, which were dropped maliciously by gorillas I assume, and were able to design a glass cover that survives up to 80% of the time when dropped from one meter.

It may not seem like much but this innovation is actually pretty amazing. I’m sure most of the readers out there have experienced that sharp pang of despair as you watched your cell phone hit the ground, only to pick it up (hoping beyond hope that just this once you got lucky), only to feel the frustration wash over you as you are faced with your cracked reflection in the glass of your now destroyed phone.

With Gorilla Glass, it may soon become a thing of the past. With Corning continually striving to protect your phones from impact and gorillas, we might yet see a future with no more despair, no more cracked screens.

No comment yet on whether the gorillas are forced to pay to replace the phones they broke.

Since its launch in 2007, Gorilla Glass has outlasted and out…fallen…(?) its competition. It’s featured in more than 3 million devices and used by over 40 manufacturers because it maintains optimal thinness, durability, and optical clarity while still being tough.

Why they refuse to address the issue of gorillas invading our homes and dropping our phones deliberately remains unanswered.

This post was sponsored by Corning but all allegations against gorillas and opinions are mine alone.

How Anime and Manga Culture Can Help the Comic Book Industry