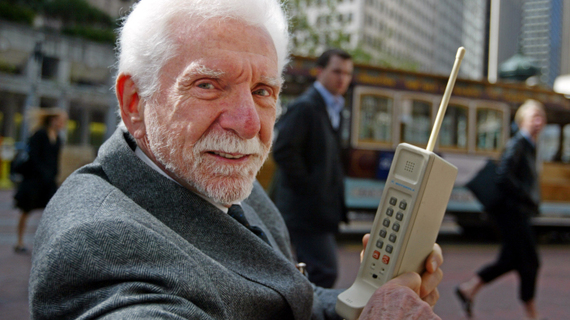 There is no records of what the conversation was about, but I can imagine him saying something along the lines of “are you in your office on your land-line? Oh, well I’m out on the street on a cell phone – boom!”…Maybe not exactly like that.

Keep in mind that this was during a time where people did not even have cordless phones yet, Marty Cooper skipped a step, what a huge moment in history your’re probably thinking. Well at the time, the media wasn’t really that fussed – check out this quote from the Associated Press report that ran in newspapers across the country the next morning:

That’s when Motorola, Inc, hopes to come out with its portable phone, a little under eight inches long and weighing less than three pounds, yours for a basic charge of $60 to $100 per month, plus tolls. Carry it to the beach, the supermarket, the yacht, the fox hunt, the golf course, the hideaway where you want to get away from it all.

These jabs were perhaps warranted, because it was another 10 years before Motorola made the first commercial wireless call on a Motorola DynaTAC phone, in October 1983. It took another 7 years before we hit the 1990’s and mobile phones began to see any sort of popularity.

In 1980, the Washington Post cited a study, stating that

as much as 13 percent of the business community would be interested in purchasing one of these advanced systems.

Numerous other writers and experts of the time were also skeptical of the mobile phone:

Cellular phones will absolutely not replace local wire systems. Even if you project it beyond our lifetime, it won’t be cheap enough.

Well obviously, all these people could not have been more wrong. There are now nearly more mobile phones on the planet than there are people. People could not even imagine for one second, leaving home without their mobile. Our lives are now completely surrounded by mobile technology. How did we get here?

Between 1983 and 2013 a lot has happened to the world of technology. The advancement of mobile phones has been staggering and there are no signs that it is slowing down. The possible functions of the mobile phone seems to be never ending. How long will it be before people no longer need computers or cameras? One device already seems to be here – the iPad 4, with 128GB.

We owe a lot to people like Marty Cooper, he kicked things off in terms of mobile phones in a time when not many people were interested.