Sharpening Focus: Catching Up With the Oculus Rift 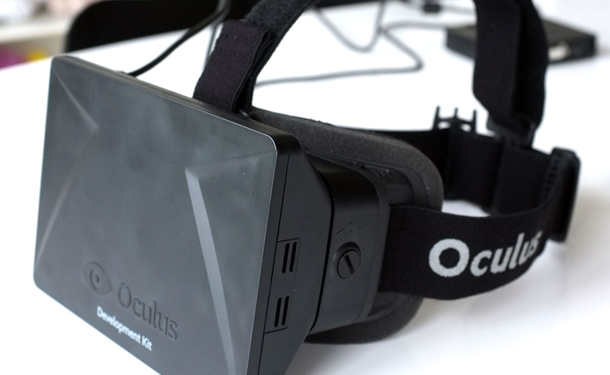 Most people first became aware of the Oculus Rift virtual reality headset when an early prototype garnered a lot of attention at last year’s E3 event. Screen technology has charged ahead since then, as evidenced by the pixel-dense displays of the current phone generation, and new versions stand to fulfill the promise offered by the concept. With strong feedback and the now undivided attention of John Carmack, an influential figure in the tech world, can we expect 2014 to be a breakout year?

There have been numerous attempts over the years to capitalize on the desire for ‘virtual reality’ engendered by science fiction (think Star Trek’s holodeck, or The Matrix’s convenient neck plug), but nothing has ever really taken off. There are fairly obvious reasons for this. Virtual reality experiences require various elements to function with similar success, or the whole of a system is sullied. Visual fidelity, motion recognition, and sound reproduction all need to cohere, which has proven difficult–even leaving aside the computational horsepower required to generate everything.

While the technology has long been available to record and play high-quality binaural sound, and something similar can be said for motion sensors, there’s been a long wait for display technology to become advanced and lightweight enough to offer a worthwhile viewing experience while remaining strapped to someone’s face without being problematically uncomfortable.

Some people have eye problems or neurological issues preventing them from seeing in 3D, or twig-like necks incapable of supporting additional weight. Everyone else would want to use an Oculus Rift. They may not want to use it for everything, or for extended periods, but each and every one would want it as part of their gadget collection. Before that can happen, though, it needs to be completed and made available for widespread purchase. Various developer kits have made the rounds, but the important thing will be the finished consumer model.

The newest version provided for testing is equipped with a 1080p display with a 60 Hz refresh rate, a significant boost from the original 800p model. This is hardly indistinguishable from reality, but it should be more than enough for a satisfying degree of quality, and a recent report notes that the development team is working on even higher resolutions. The writer notes that “not once do you feel disorientated on the HD headset,” so they’ve already crossed a significant usability hurdle.

Interestingly, Valve have announced that they will demonstrate some VR technology in January with a different prototype headset. There are no further details yet, so we can only speculate on whether it ties into their nascent push into hardware or is simply something they’ve cobbled together (in the absence of a customizable alternative) for the purpose of showing off their software. The latter is somewhat plausible as Valve added a VR mode to Team Fortress 2 earlier this year, and Oculus VR’s Product VP Nate Mitchell said “We’re good friends with the people at Valve” just last month. Given that the Oculus Rift will almost certainly reach regular production well before any prospective Valve offering, however, it may be that Valve are simply willing to back the Oculus Rift in order to popularize the concept before weighing in with their own product.

Oculus VR have done well thus far when it comes to publicity, getting a lot of positive coverage and attention. The fact that John Carmack—known for his company’s innovative work on early 3D titles including Doom and Wolfenstein 3D—is now their full-time Chief Technical Officer can only help them carve a lasting place in the tech world. That said, they are still just minnows in waters dominated by massive predators, and cannot afford to slip up even once. They will want to make the Oculus Rift an industry standard as quickly as possible and thereby make their brand the first name in mainstream VR technology.

Looking ahead to 2014, my hope is that a fully-functional and tested Oculus Rift becomes available for around or even less than the $300 they stated as a goal months ago. I’m generally a very frugal man, but I would probably dislocate a shoulder hurrying to claim my wallet from the terrifying depths of my pockets to buy one.

If I had a prediction for the company in the long term, however… I would guess that Valve will end up partnering with them formally and permanently, if not buying them outright. Their record of hiring proven talent to perfect their products under the Valve umbrella (think Narbacular Drop and the Portal games) makes me very curious to see what the future holds.

Is it possible to make more of an Error 404 page?

Tesla and the race to fill orders

Campaigns and Cryptocurrency with Engage Raise: The start...

7 Tips for Liquidating your Business

How Home Automation Systems Can Save You Money