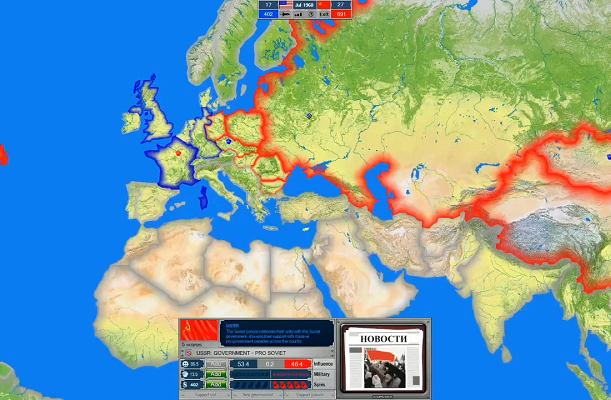 Cold War Era begins immediately with the world map and no additional guidance, however clicking on a country from the map shows a few key statistics. These figures include the percentage of a country’s population that support or oppose that country’s current government, and the amount of influence the USA or the USSR has over that country, also as a percentage.

Once a country has been targeted there are three possible spending options: Buying influence, increasing military presence and establishing a spy network. Additional military units can only be added to countries under the complete influence of your own nation, and only if they’re at war with a neighboring country of opposing influence.

Sending spies to any country will enable players to view the opposing military presence as well as give players access to a few more options. Riots can be incited to raise public opposition to the current government and parades can be held to reduce opposition. Once particular conditions have been met, the spy network can incite a revolution or install a new government, thus putting that country under the player’s control and adding the country’s point value to their total score.

If this all sounds a bit confusing, that’s because it is. With no tutorial, in game help menu or even pop-up tooltips, my first fifteen minutes of gameplay were a frantic flurry of clicked buttons, wasted funds, dead spies and lost wars. After realizing I had no idea what I was doing, I exited the game to consult the PDF manual. After reading and re-reading the manual, I followed the included links to the Alina Digital blog which contained lengthy and even more convoluted descriptions of key gameplay mechanics not covered by the included manual.

I eventually resorted to hitting up Youtube and watching gameplay footage by players not affiliated with Alina Digital. It was certainly a complicated way to learn how to play The Cold War Era, especially considering its simplicity. Once the basic routine of increasing influence, inserting spies, and adding military units is nailed, the entire game basically boils down to monitoring countries of interest and clicking the same few buttons once every five seconds for an entire hour. But it’s not only the gameplay that lacks depth.

Alina Digital Have Made Some Questionable Design Choices

In case you were wondering why all of the screenshots in the game look the same it’s because, graphically and aesthetically, nothing ever changes. There’s no animations to show military movement, raging civil wars or even the results of the space race. During the game, money can be pumped into researching space technologies for influence bonuses, but the tech tree is nothing more than a linear set of milestones that each require a pre-set mount of cash to achieve. 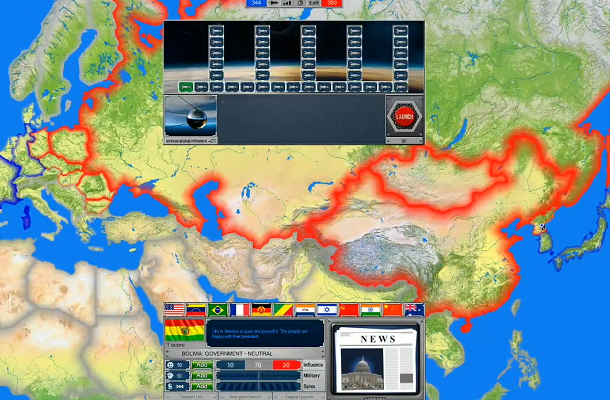 The Cold War Era‘s soundtrack is suitably ambient and tension inducing and suits the political battling quite well, but is ruined by the game’s lack of audio diversity. Actions such as inciting riots or holding a parade result in a single soundbyte being played. Since riots and parades are carried out almost constantly around the world, the same sounds are played over and over. It’s simple, monotonous and tiresome. And therein lies the problem: The Cold War Era is just too simple to engage anyone for a full hour.

Play it for long enough though, and you’ll undoubtedly end up scratching your head as you begin to question some of the choices made by Alina Digital during the development of The Cold War Era. For example, why does the USSR use dollars as its currency and not rubles? Why is the money spent in the tens and the hundreds instead of the millions? Why can’t money be spent once funds drop to $200? Why does it costs the same to insert an American spy in the heart of Russia as it does to insert one in New Zealand? Honestly, the list of arbitrarily defined game mechanics goes on and on.

Something must also be said of the archaic digital rights management (DRM) Alina Digital has chosen to use with The Cold War Era. Alina Digital had actually provided me with a three day preview serial key for the game for the purpose of writing this review. I had originally installed and played the game on my desktop computer, but later installed it on my laptop. Forgetting that the three day limit ran out, I proceeded to input my name and serial key only to be presented with the following message. 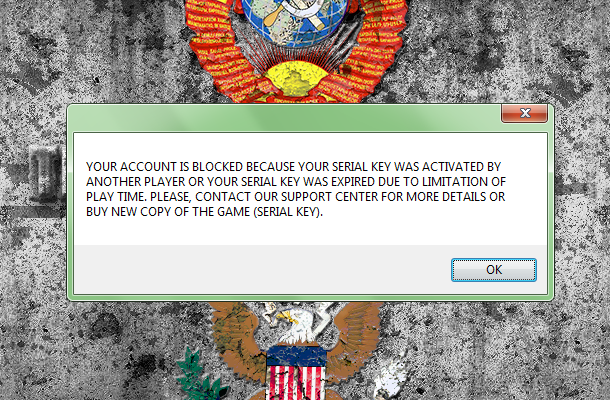 Although the reason for the message was the expired time limit, it still got me thinking. What if I had accidentally typed my name incorrectly, or what if some unscrupulous individual used my serial key? Would I have to purchase a new copy of the game?

I reached out to Alina Digital to find out more about their DRM policies. I got the following email which can be found below. Grammar and spelling has been left unchanged.

If you have an original copy ( serial code ) your game would never been blocked unless some one else play the game with the same serial key. There are no any chances the serial key can be blocked by any other reason. If it has happened it means you have violated the rules of the purchase. Once it’s happened your personal key can not be restored. Your personal key belongs only to you and nobody else can use it. This is very common practise among server based games.

If there was another reason why the serial key is blocked and player can provide clear explanation why it’s happened the serial key can be restored without any problems.

Confused, I started digging through The Cold War Era‘s website and found the DRM policy laid out on the game’s download page. A page that is viewable only after the game is purchased. It clearly states that if a serial key is registered with a name that isn’t exactly the same as the name on the PayPal statement, then Alina Digital will not provide technical support. Even more worrying is the section that describes how a serial key registered with more than one name will be automatically blocked and cannot be unblocked. As taken from the website itself:

In other words, you will have to buy another copy of the game to continue playing if your serial key becomes blocked.

The DRM itself didn’t affect my experience with The Cold war Era in the slightest and therefore won’t impact on my final verdict. However, I still felt it worth mentioning to anyone who might be considering buying this game. 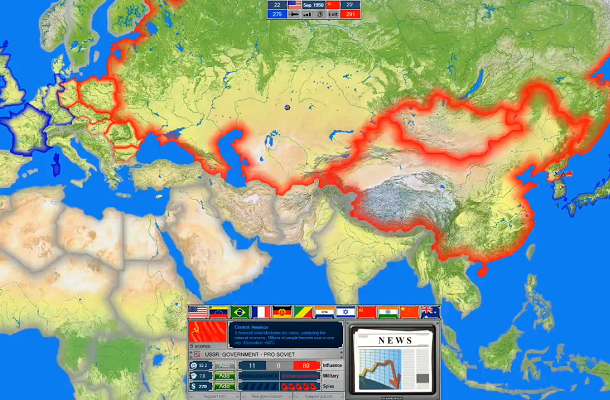 The Cold War Era clearly draws inspiration from old-school strategy games such as Risk and Axis & Allies, but fails to capture the intensity and playful competitiveness these classic games are known for. It offers a completely sterile gaming experience comprised of clicking the same few buttons, manipulating arbitrary numerical figures and staring at the same world map for an entire hour.

I’d like to say that there’s an interesting game somewhere in The Cold War Era, but the amount of additional content and graphical overhauls required would result in a different game altogether. Ultimately The Cold War Era is a bland, boring game that does nothing to stand out against the many other, affordable strategy games out there.