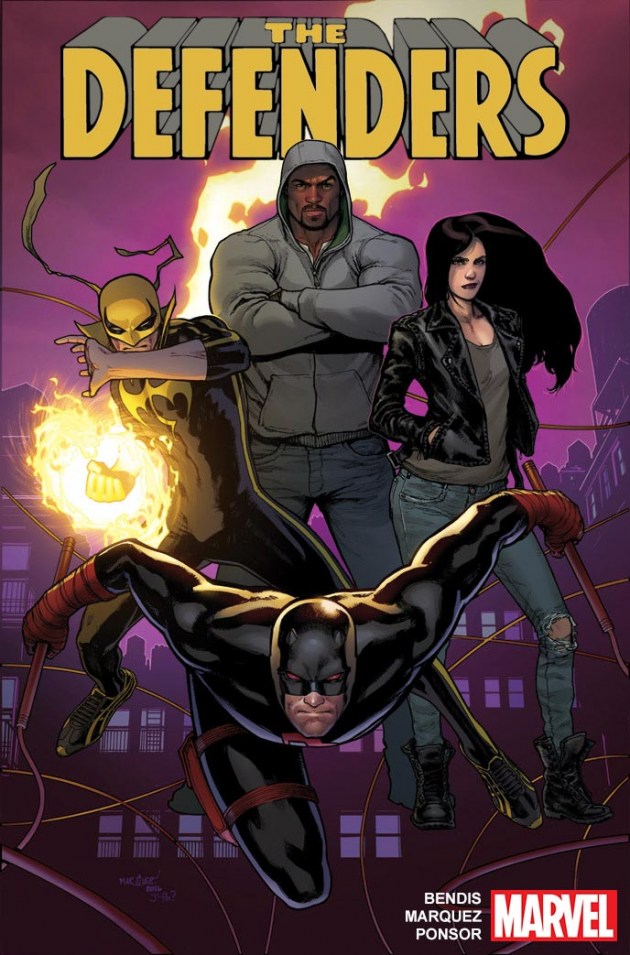 Welcome to Opening Panel, a series where we tell you the best place to start with franchise comics. The Defenders arrives on Netflix this weekend, but maybe you want to head deep into the comics first.

You may notice if you’re looking for Defenders comics, you won’t really find any that are similar to the TV show. Most of them don’t even have the same characters. We’ll give suggestions for reading both the classic Defenders team and the one from the show. We’ll have a second article later with suggestions for the oldies. Provided within this article are some touchpoints for the TV characters, not a complete chronology or best of, but some good starting points.

All series mentioned in this article are available digitally on Comixology and Amazon Kindle. We linked to Comixology, but grab ‘em on Kindle, you’ll save a few bucks and they link up to Comixology.

There is one series where you can get the Defender just as they are in the show. Launched earlier this year is a new series just called The Defenders. It’s the cast from the show written by Brian Michael Bendis (a name you’ll hear a lot in this article) with art by David Marquez. It’s a great jumping off point for people who want to read because of the show.  It stars all four leads and a familiar villain but it’s set in the comic book universe. It continues plot threads from Bendis’ other series with these characters but you can read it without any of that knowledge and be perfectly fine. The series is currently coming out in single issues and is available digitally. The paperback will be released in November. The Prelude story is free on Comixology, so give it a whirl. 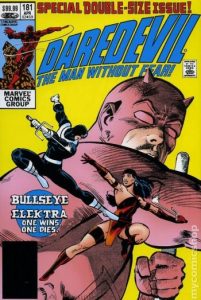 There are two Daredevil runs that most directly influenced the Netflix series. Frank Miller’s run from 1979 to 1983 took Daredevil and made him one of Marvel’s most popular heroes. Starting as the artist only with issue 158, Miller took over writing duties with issue 168. That was the issue that introduced Elektra. Miller immediately made his mark, introducing the anti-hero love interest of the character and increasing the focus on Matt’s tortured psyche. This all culminates with the death of Elektra, one of the most tragic moments in comics history.

It’s very cool as you can see him grow as an artist and a writer. The first season is based on the origin miniseries he did, Man Without Fear. He did a final miniseries, Born Again, ending his take on the character, which is available digitally. The ongoing series is in three volumes, with Born Again and Man Without Fear having their own paperbacks. The series is also available in a hardcover omnibus. The miniseries and various one-offs and guest stars are in a companion omnibus. Miller’s further work with Elektra is also available in an omnibus.

Brian Michael Bendis had a run that defined the 2000’s era of Daredevil as Matt Murdock’s secret identity is revealed.He dethrones Fisk as the Kingpin of crime. In typical Murdock fashion, it all comes crashing down. It’s notable for featuring Luke Cage and Jessica Jones as recurring guest stars, as well as showing Bendis’ love of Marvel’s “street-level” characters. It’s available digitally. There are paperback versions, but as far as I can tell they’re out of print. 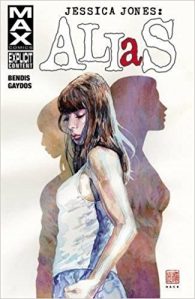 Jessica first appeared in Alias by Brian Michael Bendis and Michael Gaydos, the first comic for Marvel’s mature reader MAX imprint. Set in the Marvel universe, but kept separate, Alias pushed the boundaries of superhero comics in ways that Marvel hadn’t before. Alias starred a broken, boozy Jessica Jones – former superhero turned PI. Each of the four volumes deals with a different mystery. The final volume saw the return of Zebediah Killgrave a.k.a. the Purple Man. The mind-controlling villain who captured Jessica is the source of a case Jessica has to take on. The Netflix series is mostly based on the final volume. Available digitally and in paperback and omnibus.

Throughout Alias, Jessica had dated Luke Cage on and off. She ends up pregnant with Cage’s child at the end of the series and they decide to stay together. Jessica also needs a steady job. And lo, she gets a new series under the standard Marvel publishing line.  Giving up the booze and her MAX profanity, Jessica gets a job at the Daily Bugle’s superhuman supplement, The Pulse. She helps Spider-Man take down Norman Osborn, exposing him as the Green Goblin to the public and investigates Nick Fury’s Secret War. The Pulse is available digitally and in one paperback .

After this she mostly appears as a supporting character in New Avengers by Bendis, playing “Luke Cage’s wife.” She joins the team properly in the second series but doesn’t end up doing much.

She got a new series in 2017, which saw Bendis and Gaydos working on it once more. Jessica Jones takes her kid and leaves Cage, out to solve a massive conspiracy that threatens to tear the superhuman community apart. Currently ongoing digitally and in print. 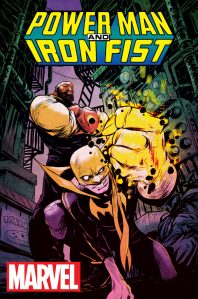 Iron Fist has been around a long time, but much like his TV series, the problem is he’s usually kind of boring. Not to say that he’s a bad character, inherently problematic, sure, but not bad. He’s that kind of “white dude hero” and “woah, we probably shouldn’t have done this with a white dude hero” that makes it hard to tell compelling stories about him without crossing lines.

The Immortal Iron Fist by Ed Brubaker, Matt Fraction, and various artists was the creative resurgence that the character needed. The series focused on the mystic city that he was raised in and revealed he was not the only Immortal Weapon. It’s a great series with vignettes featuring the Iron Fits through the ages and actually addresses the more uncomfortable aspects of the character with some tact. Fraction would continue to write Danny in his Defenders series, which I’ll cover next time. It’s available in two paperbacks.

Luke Cage has gone from street hero to leader of the Avengers, mostly thanks to Bendis’ love of him. Luke featured prominently in New Avengers which also had Jessica, Danny, and Matt as members at different times. Available digitally and in several paperbacks and hardcover editions. After they leave, he and Jessica form The Mighty Avengers. The series written by Al Ewing and Greg Land was later retitled Captain America and the Mighty Avengers with Luke Ross taking over on art. Here it is in digital and paperback.

A fantastic series with both characters is Power Man and Iron Fist written by David F. Walker with art by Sanford Greene. It’s a book about two adult men becoming the bros they used to be, whether both of them like it or not. It takes on aspects of black culture not normally touched on in superhero comics, with Walker coming from the background of a black novelist. There’s a lot of blaxploitation homages that fans of the Luke Cage TV series are sure to love. It’s also a blast with flying cars and voodoo. It was followed up by a Luke Cage solo series written by Walker with art by Nelson Blake II. Power Man and Iron Fist is available digitally and in three paperbacks. Luke Cage is available digitally.